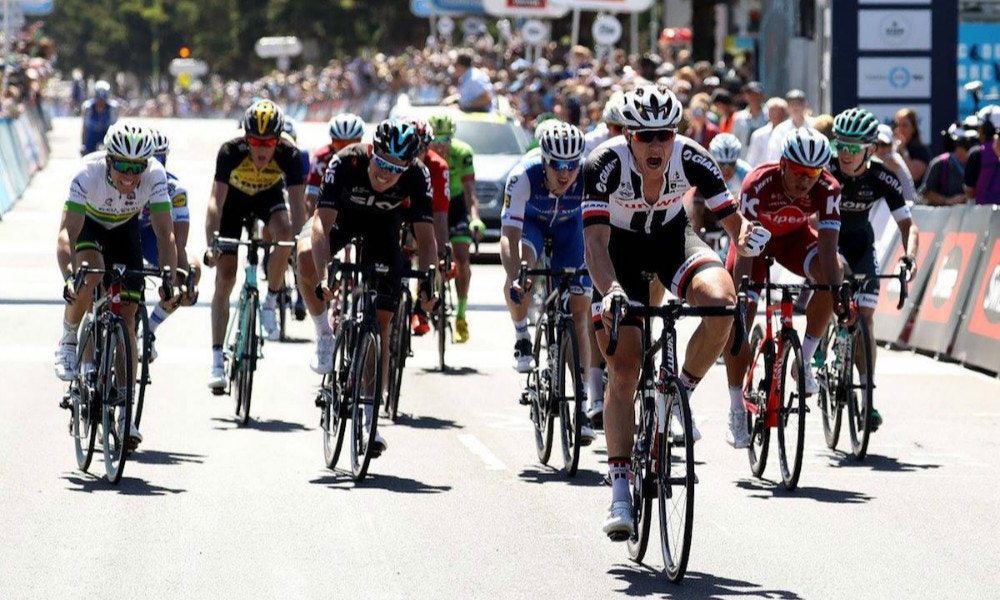 The third edition of the Cadel Evans Great Ocean Road Race weekend was completed with the weather gods smiling on Geelong and for what proved once again to be a race that is full of surprises. In two contrasting events, the men's winner came from a large group with a late bunch kick, while in the women's, a select group of five riders battled it out after what had become a war of attrition. For the first time the event also featured a curtain raiser kermesse type race around Albert Park which was raced at extraordinary speeds.

Read on to get the full story for both the men's and women's curtain raiser and main events. After several near misses last week at the Tour Down Under, Sam Bennett (Bora-Hansgrohe) has taken his first win of the 2017 season, sprinting to victory at Race Melbourne.

The Irishman flew down the barriers to take a comfortable victory in the 116.6km circuit around Melbourne’s Albert Park, finishing several bike lengths ahead of Danny van Poppel (Sky) and Scott Sunderland (IsoWhey Sports-SwissWellness). Edward Theuns (Trek-Segafredo) was fourth while pre-race favourite Caleb Ewan (Orica-Scott) had to settle for fifth place after being boxed in.

“I’m extremely happy,” Bennett said afterwards. “To get the first win of the season’s really nice and takes a little bit of pressure off.”

“I’d like to thank Ralph [Denk, team manager] and Bora-Hansgrohe for setting up a great race program and supporting us here and also to my teammates who supported me all day. They did a fantastic job and they got me out of trouble even the last three corners.

“I kind of lost the wheel and they still managed to get me in a great position.” It was a fast bunch sprint and the closest of finishes in the first edition of Race Melbourne with Kirsten Wild (Cylance) and Chloe Hosking (Ale Cipollini) looking to each other as they rolled past the finish line, wondering who had won.

It came down to a wait for the photo finish in the curtain raiser criterium for the Cadel Evans Great Ocean Road Race, with Wild’s throw to the line delivering the victory and making it her third time on the top step of the podium in the past two weeks.

“Chloe was going really fast from the back and it was really exciting. I pushed my wheel to the front,” Wild told reporters.

The pair were the favourites coming into the race after a stellar start to the year, with both standing on the podium in three of the four stages of the Santos Women’s Tour last week. Watching Wild and Hosking fighting it out for the win has been a regular occurrence, but this battle was the closest we’ve seen.

“I felt like my wheel was maybe first but it was really, really close. She was coming with a bit more speed from the back so it was really dangerous. I think if it was one metre more she would have won,” Wild told Ella CyclingTips in a video interview. Annemiek van Vleuten took the win at the 2017 women’s Cadel Evans Great Ocean Road Race for Orica-Scott, in an exciting attack filled competition that deviated from the expected script to finish off the Australian summer season of women’s racing on a high note.

There couldn’t have been a better day for the peloton to keep the racing lively and unpredictable from start to finish as this was the first international women’s race on Australian shores broadcast live on television in more than six years, with the World Championships in 2010 being the last.

There were frequent attacks, splits in the cross winds, a solo break by Emma Pooley (Holden Women’s Racing) that enlivened the finish and had fans on the course yelling out support to the women who won the world time trial champion in Geelong in 2010. Then to finish it off there was that final dash to the line between an unexpected group of five non-sprinters for the win.

In the sprint from the break of five it was Ruth Winder (UnitedHealthcare) who took second behind Vleuten in the UCI 1.2 classified race, titled the Deakin University Elite Women’s Road Race, while Mayuko Hagiwara (Wiggle High5) came third and then it was Lucy Kennedy (High5 Dream Team) and Pooley.

The 113 kilometre course, which takes in views of the iconic Bells Beach, had enough hills to provide plenty of launching points for attacks and it was no surprise that it was a small group at the end, but few would have predicted it’s composition. The pre-race favourites like last year’s winner Amanda Spratt (Orica-Scott), Katrin Garfoot (Orica-Scott), Peta Mullens (Hagens Berman-Supermint) and Chloe Hosking (Ale-Cipollini) were all absent from the small lead group.

Instead it was an unpredictable bunch, surprisingly with only one rider from Orica-Scott near the front, and probably not the one most would have expected.

“I target actually the beginning of March to be in really good shape, so I said I would like to help my team, my teammates and be a domestique,” van Vleuten told reporters. “So I did some work already in race but in the end I was still there.”

However, no one would have doubted that van Vleuten was up to the task of taking the win for Australia’s only UCI registered women’s team as she has come back strongly since she had that horrific crash at the Rio Olympics when she looked to be on the way to a gold medal.

“For me it (Rio) had a bad ending but … to be in that shape inspired me for next season and it’s really nice to already show it with a win for this season.” said van Vleuten, adding that it was especially important for her to finish it off for the team at one of its home races.

The victory topped another 2017 Australian summer season of winning form for Orica-Scott, who took a clean sweep of the Australian elite women’s national road titles at the start of January and then went on to win the overall for the Santos Women’s Tour with Amanda Spratt. The competition to take those wins, however, has become stiffer as only two years ago Orica was a rare international team largely surrounded by domestic racers, but this year the international teams have come out in force to dominate the start list.

Three years of the Cadel Evans Great Ocean Road Race, three very different results. In 2015 it was a sprint from a group of just eight; in 2016 we had a solo winner; in 2017, the race’s first on the WorldTour calendar, it was a much bigger group that contested the finish.

But it was very nearly another solo rider that won today’s race.

German sprinter Nikias Arndt (Sunweb) was the first across the line in bayside Geelong, dashing to the fore from a group of more than 20 riders. In doing so he caught lone leader Cameron Meyer (KordaMentha-Australia) mere metres from the line.

Meyer had attacked from the lead group on The Esplanade with just 600m to go and for a time it looked like the West Australian had ridden his way to victory. It was a move very reminiscent of the one that decided the Australian Road National championships a few weeks earlier.

“I knew it was a headwind and it was a similar sort of finish to the Nationals how Miles Scotson won and I thought ‘Oh I’ll try my luck with the same thing.’” Meyer said post-race. “I’m not a pure sprinter so I knew there was quicker guys in the group. Unfortunately I needed 10 meters less of the race …”

Meyer was caught so close to the finish line that he managed to hold on for third place, despite the pace of the sprinters coming from behind. Arndt timed his run to perfection, using Meyer’s slipstream to propel him to the finish. Simon Gerrans (Orica-Scott) was hot on his wheels, finishing in second.

For Arndt, the victory was made all the sweeter by the fact he was dropped in the closing circuits around Geelong. The presence and support of his teammates helped him battle back to the front and be there to contest the win.

“I thought it’s not possible to come back anymore but I just didn’t stop fighting,” the 25-year-old said. “I just pushed and then I saw also a teammate just after the last climb, Wilco Kelderman, was still around me, and he pushed me and he was doing a big pull. And then I thought ‘Okay if he did such a big pull, you also have to come back. You cannot give up now!’ and then I just continued.

“I also have to say the group in front slowed down a little bit and that was my advantage to come back. But the last lap I did not believe myself really in it [being able to come back] but I just said ‘Ok, I will fight for it.’”