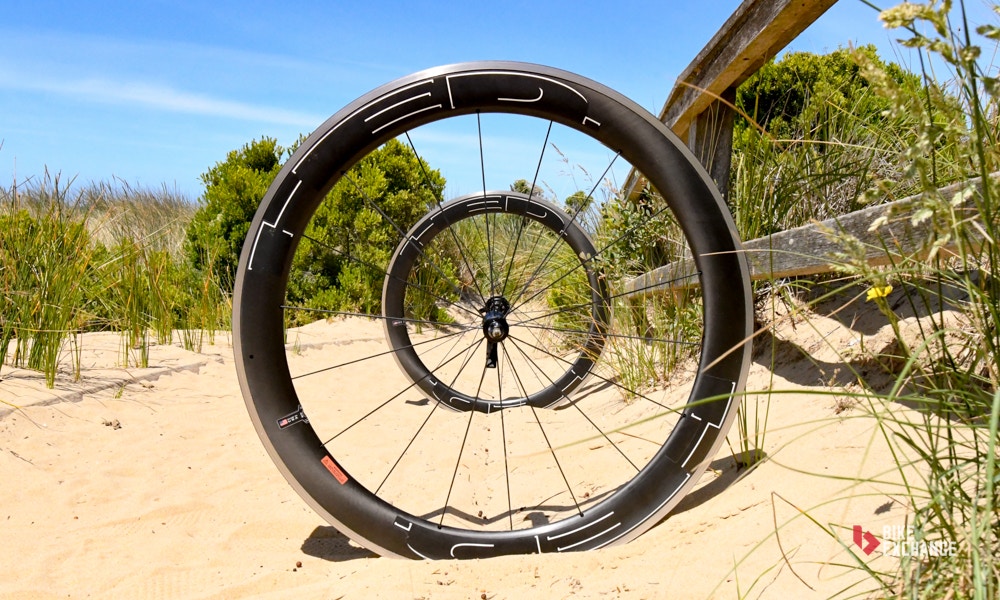 There are few components on a bicycle that will have as much effect on the way it performs and feels out on the road as a quality wheelset. Responsible for letting your bike roll, a good road bike wheelset should soak up the road buzz, be durable enough for long-term use and provide you that extra edge on your mates in the bunch.

Aerodynamic and wheel pioneers HED are no strangers to the manufacture of performance wheelsets. With the Jet Plus range of wheelsets, the American company combines its wind-cheating knowledge with a proven and durable rim design to create a line-up of wheels that, on paper at least, appear to tick all the boxes riders should expect from a race on Sunday, train on Monday wheelset.

Carbon Clinchers, But Not As You’d Expect 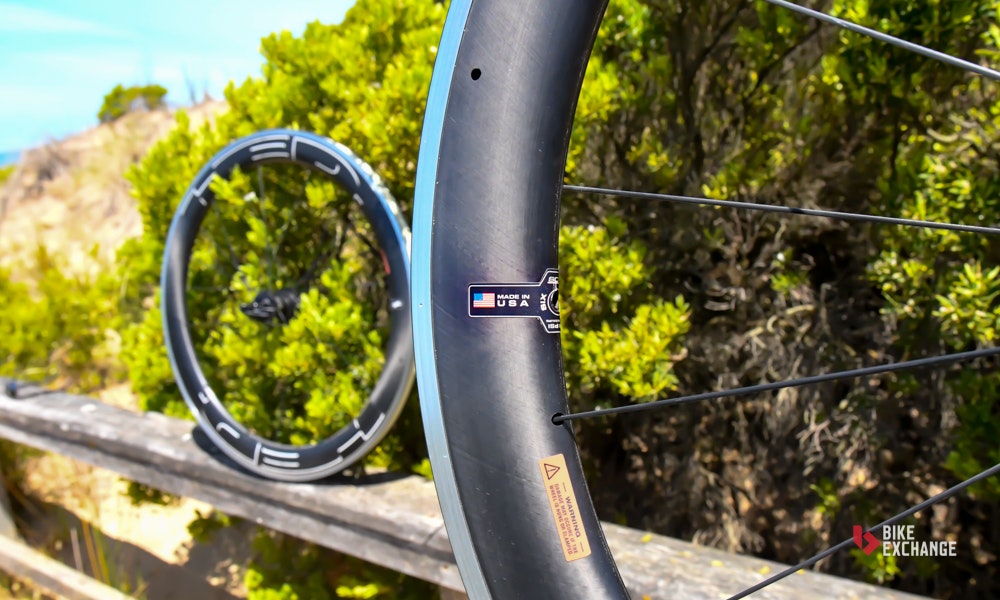 No stranger to doing things a little differently, The Jet line-up of carbon clinchers (4, 6 and 9) feature a 1k carbon fairing as opposed to a solid carbon structure. This means the wheel is essentially an aluminum box section wheel at its heart, with a carbon fairing added for improved aerodynamics and speed.The fairing itself is bonded to the rim, meaning that the spokes engage at the rim rather than at the end of the fairing. This aids in aerodynamics, as there are no exposed nipples, and also has the effect of increasing the lateral strength of the wheelset.

The use of the fairing, while an effective way to improve aerodynamics, does comes with its disadvantages though. In order to keep weight down, the fairing must be made thin, this gives it a flimsy feel in hand as it physically bends and flexes when you poke and prod at it, not exactly confidence inspiring if you frequently ride over unsealed roads. The wheelset carries a disclaimer on the rim itself to not hang your bike by the wheels, or use any clamping forces on the wheels themselves, limiting external car transportation options.

Longer spokes are required to pass through the fairing and be laced to the traditional alloy rim. Not such a big deal, but longer spokes mean more weight and at least theoretically, will fatigue sooner than short spokes.

There is also the issue of water intrusion. As there need to be holes for the spokes, with some additional room to allow for spoke flex and rotation, water ingress from washing, or riding in the rain is inevitable, thankfully, HED has placed drainage ports to expunge most of the water out of the wheels, not all though which did lead to some stability issues at speed, more on that below.

All About the Width 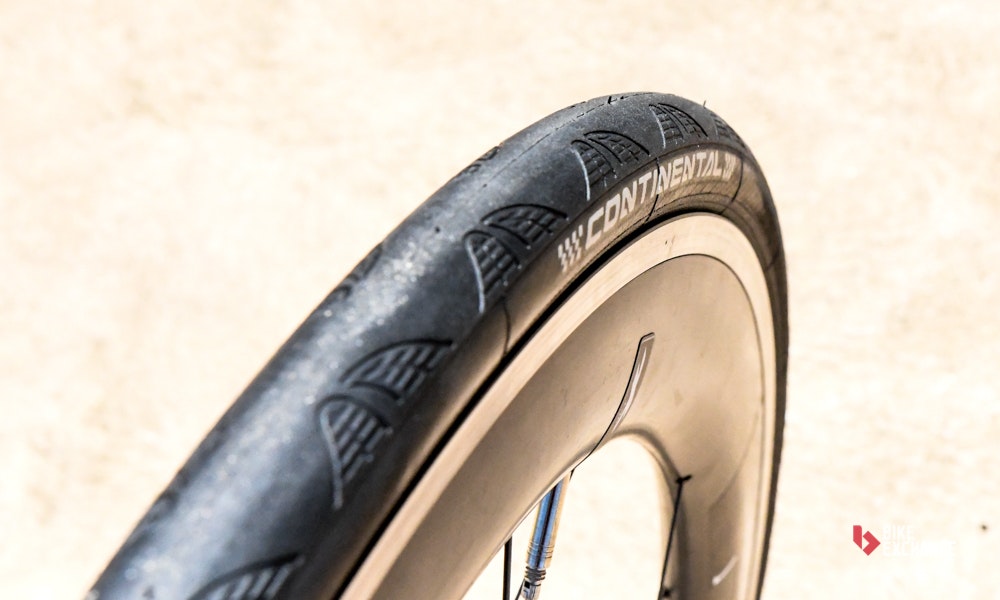 Slide the Jet 6 Plus out of its well-packaged box and the width is the first thing that is immediately apparent. HED has always been ahead of the game when it comes to internal and external wheel widths, almost single-handedly pioneering the industry charge toward wider wheelsets for on-road use

Our review set measured 25mm externally at the brake tracks and a much wider than usual 20.6mm internally. Our 25mm Continental 4000 S Il tyres measured up at an actual 27mm when fitted brand new, ballooning out to 29mm after a couple of months worth of riding.

Whilst this wasn’t an issue on a modern frame, it’s worth noting that some older frame styles or aero specific bikes with tighter tolerances may run into some issues with tyre rub as a result of the additional width.

One other notable caution to uninitiated users rims is that these rims can be very difficult to get tyres on and off. Ensure the correct procedure utilising the central channel of the rim when mounting new tyres is followed, failure to do so may (will) result in bruised thumbs, many profanities, and a few broken tyre levers.

Related read: How to deal with an impossibly tight tyre 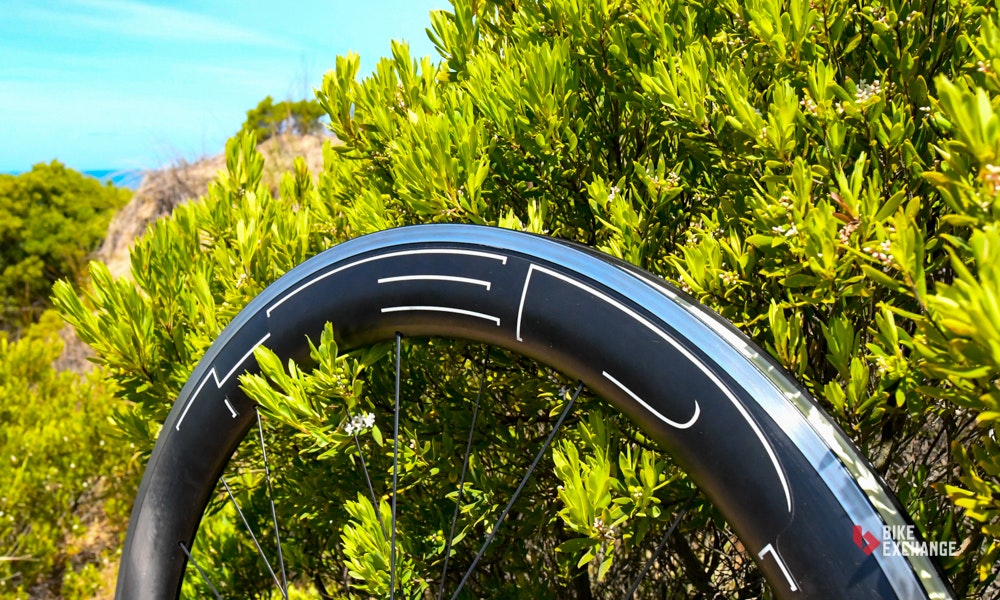 Despite overwhelming consumer demand, HED has never been willing to offer a full carbon clincher due to the safety issues. Thankfully this commitment to safety ensures that the Jet 6’s bring you to a stop just as competently as they hang onto speed.

Featuring a brake track made from CNC alloy, the wheelset offers up all the heat dissipation, brake modulation and stopping power of a good alloy rim. Combined with SwissStop GXP alloy brake pads, the Jet 6’s braking surface performed in all conditions from still summer mornings and muddy gravel roads to high country descents in the rain, all without a hint of brake fade the entire testing period.

It’s worth noting that a more premium version of the Jet 6 exists with superior braking on offer. The Jet 6 Black (RRP AU$3200) carries a number of upgrades over the standard wheels including straight pull spokes and an updated hub design, and most notably, a machined and anodized braking surface. HED claim that this brake track improves wet weather braking by a further 70% over the already impressive braking found on the standard model tested here. 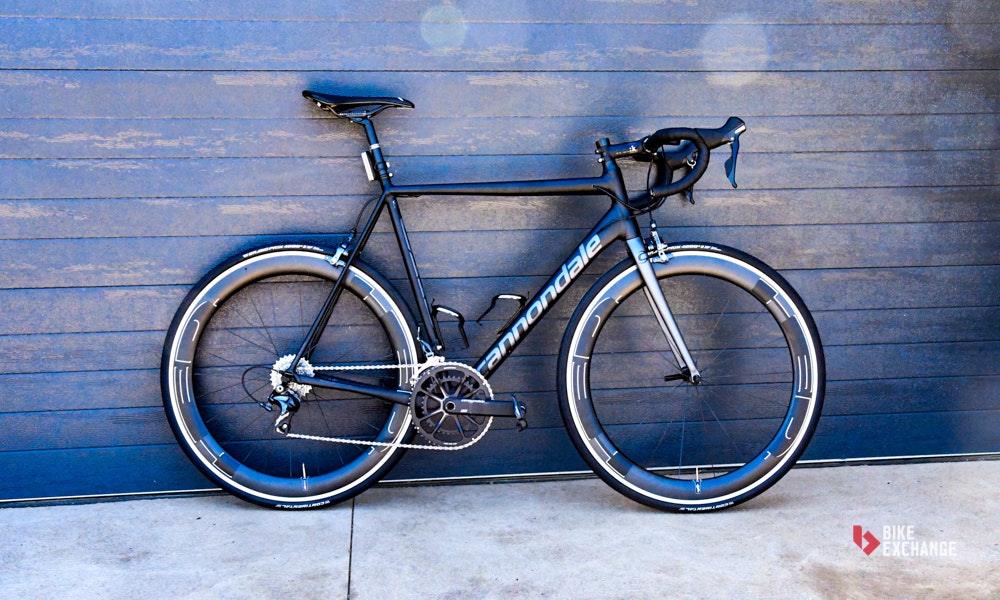 With a wealth of wind tunnel information and specifications on offer from HED and third-party sources, there’s little denying that the Jet 6 Plus appears on paper to be a superb wheelset. And as testing proved, this paper performance carries over into the real world.

Wrapped with quality Continental 25c rubber inflated to 80 PSI, the additional width changes the nature of the tyre's contact patch with the road, with a ride quality best described as plush. Reducing most, if not all, of the road buzz caused by the chip seal roads I frequented during the testing period. 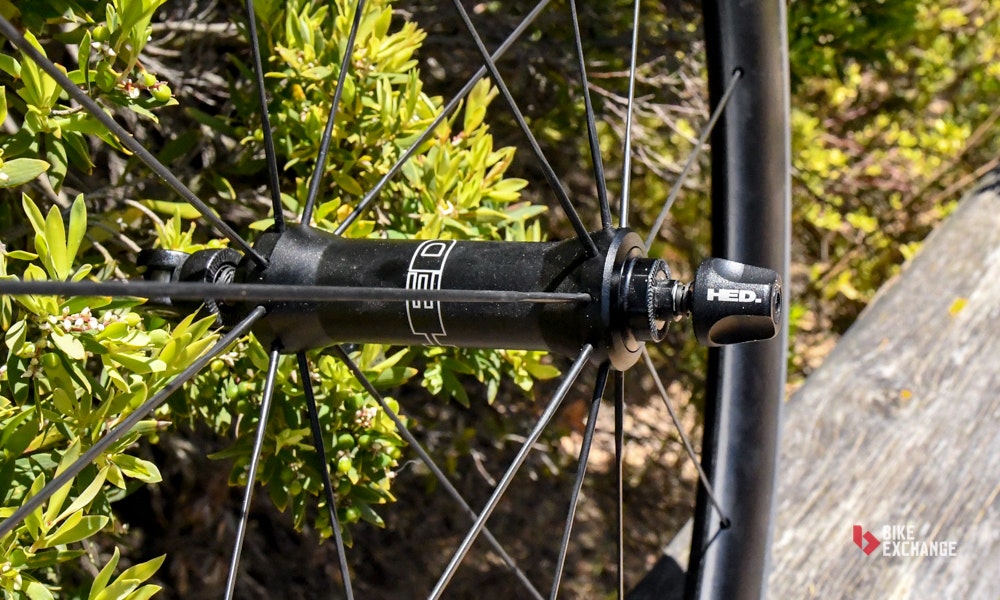 The Jet 6’s roll just as well as they ride too. HED laces the Jet 6 Plus with its proprietary 545 hubs, featuring 5 pawls with 45 teeth for engagement. This results in an aggressive freewheel noise, that may prove to be a bit much for sensitive ears in the bunch. The upside to having a high tooth count in the rear hub is how quickly it engages on an initial pedal stroke. Especially handy for racers looking for an edge in the crit racing scene.

Related Read: Everything to know about Road Bike wheels

The bearings found within the hubs are quality ABEC 5 steel bearings on oversized axles (12mm front and 15mm rear). These oversized axles are claimed to be flex-free, resulting in smoother bearing loads and less drag making for a wheel that spins more effortlessly. Despite my best efforts, I couldn’t detect a hint of wheel rub during hard sprint efforts, or hard out of the saddle squirts when the road pointed up. 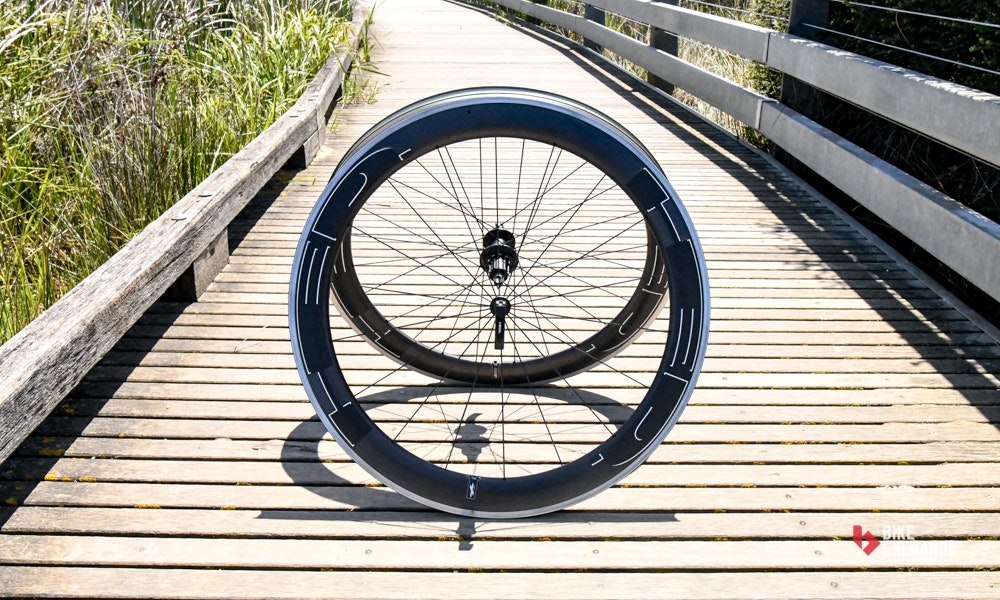 With a depth of 60mm front and rear, there’s no denying that this is one aero wheelset that is designed to be ridden at speed. Weighing in at 1706g, the wheels took little effort to get up to race speeds with the aero wind cheating wizardry providing the rider with the ability to hold higher speeds with less effort. However, for those living in hilly regions, the additional weight of aero wheels may still prove a disadvantage, with a comparable box-section wheelset weighing approximately 200g less.

The stability of the wheelset at speed in dry conditions is to be commended, however, I would caution users that frequently ride in inclement weather. The water ingress that occurred when riding in the rain courtesy of the drainage and spoke holes did create a big heaping of instability when descending. As speeds neared 80kph during testing, the wheels had developed a radial instability (hopping up and down) that was noticeably felt. Thankfully, I was unable to replicate this same “death wobble” in the dry so I’ll put it down to water ingress in the fairing, but it’s still worth being cautious of if you’re training and racing in poor weather conditions. 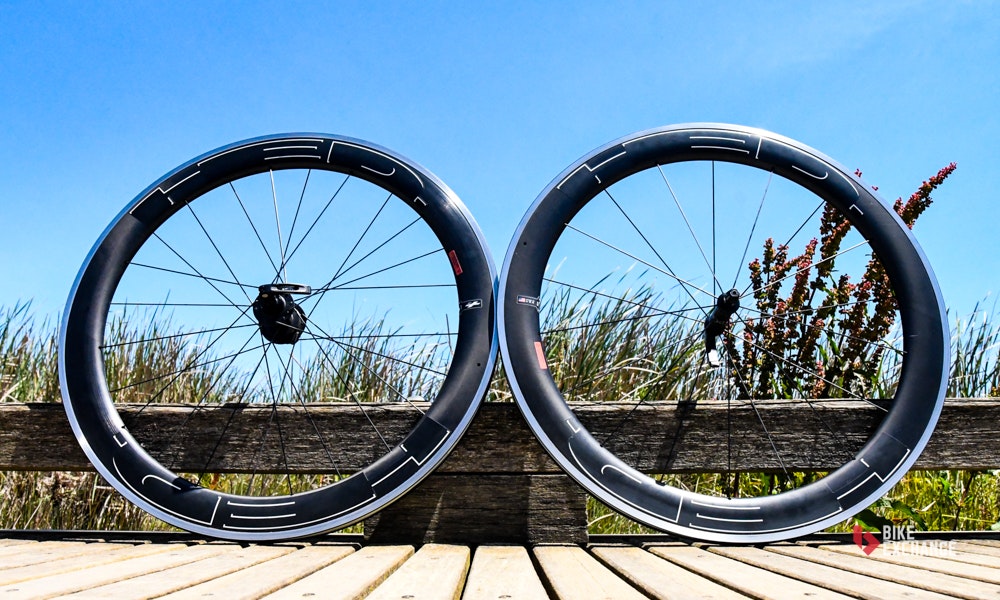 There’s a lot to like about this wheelset, and if I'm honest, very little to fault. They’re tubeless compatible, on par weight wise with similar carbon clinchers, comfortable to ride on, feature a super durable rim design and offer an aero benefit that is quantifiable in the real world. With this many positives, you’d be expecting an enormous price tag to match. Well simply put, there isn’t one. With an RRP of AUD$2,500 the Jet 6 Plus also represents reasonable value for money.

So if you’re chasing a set of hoops to make your bike look the goods at a cafe stop, as well as give you that edge in performance the next time you pin a number on, this is one wheelset that I have no hesitations in recommending to any enthusiast who wants premium performance and reliability, all at a modest price.

Thanks to Dawson Sports Group, distributor for HED Wheels Australia for supplying the product for this test. The HED Jet 6 Plus wheelset carries an RRP of AUD$2500 and is available right now from leading retailers across the country