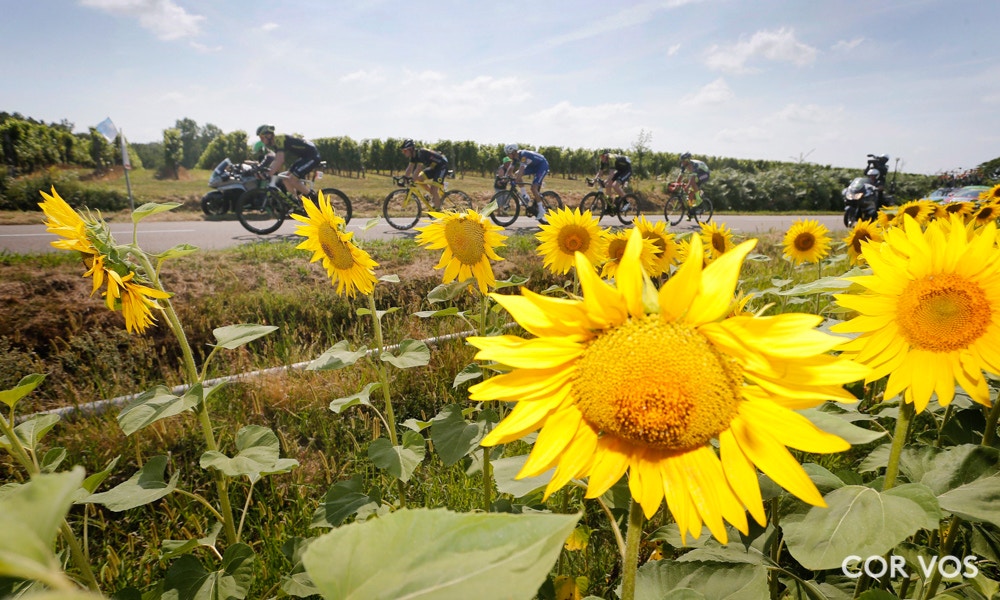 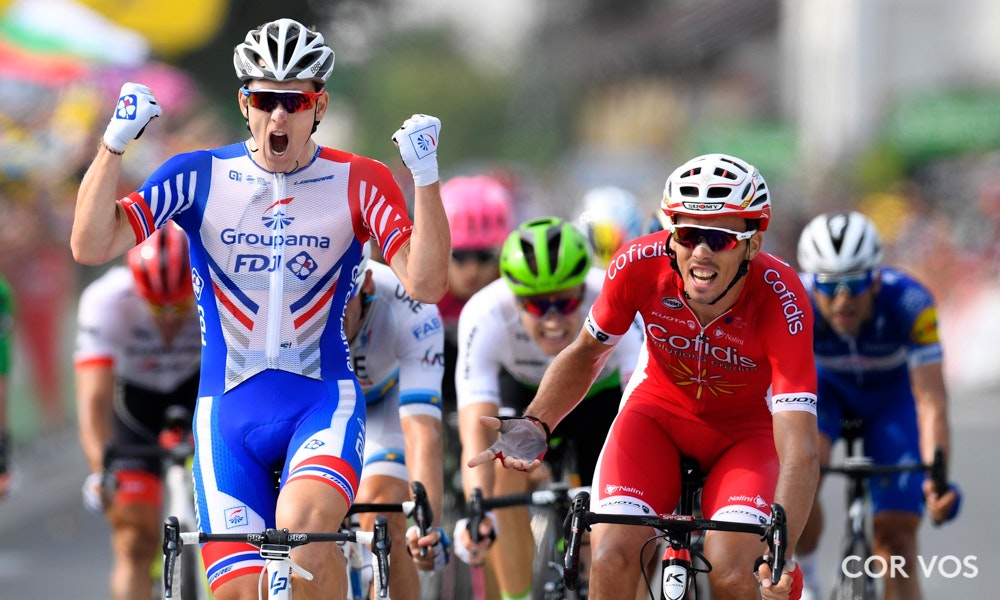 The Bora-hansgrohe team of world champion Peter Sagan worked hard in the closing kilometres to set up the green jersey wearer, but appeared to burn matches too soon and ran out of steam. Sagan finished back in eighth, likely feeling the effects of his crash on stage 17. Still, he knows that Sunday’s final stage in Paris will provide another chance to the sprinters.

Démare had a tough time in the mountains but was glad he persevered. “It is totally worth it. In the tough moments you always thing there might be this chance,” he said. “I am not the best climber, but I had good legs at the end of today’s stage. I gave it my all, I felt I might have the possibility of wining. It is the last sprint before the Champs Elysees and my team have done a great job to getting me here.

“Ten kilometres from the finish, we were going really fast. Everyone just kept on pushing. We were going full gas. I was feeling that I was right on the limit. But I was in such a good position, the team did such an amazing job at the end, I just had to finish it off.”

Kristoff was determined to try to take the stage, but had to accept third. “I only had one guy in front of me,” he said, referring to his team’s leadout. “He was too early in the front, but I didn’t really have the legs in the final straight either. I was too far back.

“I hope in Paris I can win, but Démare was fast today and in Paris he will be fast again.” 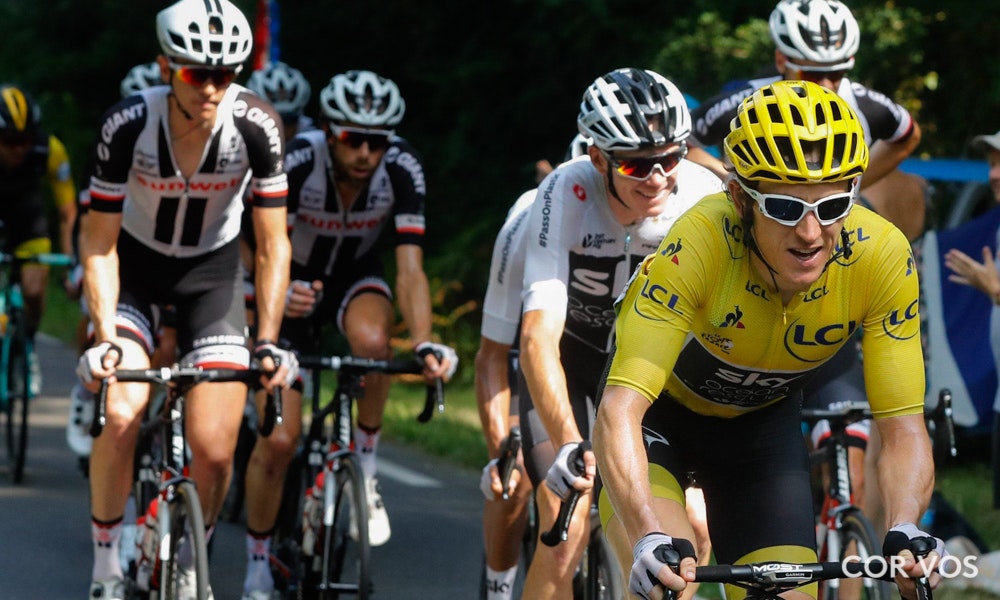 The overall contenders finished in the same bunch, meaning there was no change to the general classification. Geraint Thomas (Team Sky) continues to lead from Tom Dumoulin (Team Sunweb) and Chris Froome (Team Sky). With Sunday’s stage extremely unlikely to change anything, the Welshman knows that he has just Friday’s mountain stage and Saturday’s time trial to survive to win the Tour overall.

“I think it has just been a crazy Tour,” said Thomas, commenting on the fact that four-time Tour winner Froome is now his domestique. “So far so good, I hope we can just keep it going. It’s the last mountain stage, so hopefully all the guys will just keep doing what we have been doing and we can get through.”

He was asked if he was going to try to build a bigger buffer over his rivals before Saturday’s time trial. “If there is an opportunity, for sure I will take it,” he said. “But there is no stress to go out and gain more time. We are expecting a lot of guys to try to gain time back on me. We just have to stay focussed and keep doing what we have been doing.”

In contrast to other days this week, stage 18 of the Tour de France was a far flatter affair, with the 171 kilometres between Tries sur Baise and Pau being perfectly suited to the sprinters. That was a boost to them after some very tough times in the mountains, although many of the fastmen had been eliminated in the high ground.

Five riders jumped clear immediately after the stage start, with Guillaume Van Keirsbulck (Wanty-Groupe Gobert), Thomas Boudat (Direct Energie), Niki Terpstra (QuickStep Floors), Mat Hayman and Luke Durbridge (both Mitchelton-Scott) combining to get a gap. Other riders tried to get across but a hard-chasing peloton kept things tight. However, after 25 kilometres the bunch finally sat up, giving the quintet their chance.

However, the teams didn’t give a lot of leeway; after 50 kilometres of racing the leaders were slightly under a minute and a half clear. Terpstra took the first climb, although the other riders in the move didn’t dispute it. About ten kilometres later Jasper Stuyven and Michael Gogl (both Trek-Segafredo) went clear with Sep Vanmarcke (EF Education First-Drapac).

Behind, a crash in the peloton put a number of riders on the ground, including Wednesday’s stage winner Nairo Quintana (Movistar) and Adam Yates (Mitchelton-Scott). Neither were seriously hurt, although Quintana had a cut to his left elbow.

Van Keirsbulck won the intermediate sprint ahead of Terpstra and Hayman; the three chasers were reeled in after that point.

Van Keirsbulck led them over the day’s second climb, with a chase group getting across to them at that point. However the bunch was close behind and things came back together with 16.5 kilometres left. Bora-hansgrohe too command of things soon afterwards and did the bulk of the work between there and just under three kilometres to go.

Other teams then pushed forward, with UAE Team Emirates prominent for Alexander Kristoff. Cofidis, EF Education First-Drapac were also in the front, while Stuyven pushed through with 600 metres to go to try to set up Degenkolb.

However, FDJ had judged things best, swooping forward for Démare. The Frenchman launched his sprint and while Laporte protested a leftwards drift by the stage winner, the race jury didn’t overrule the order over the line. 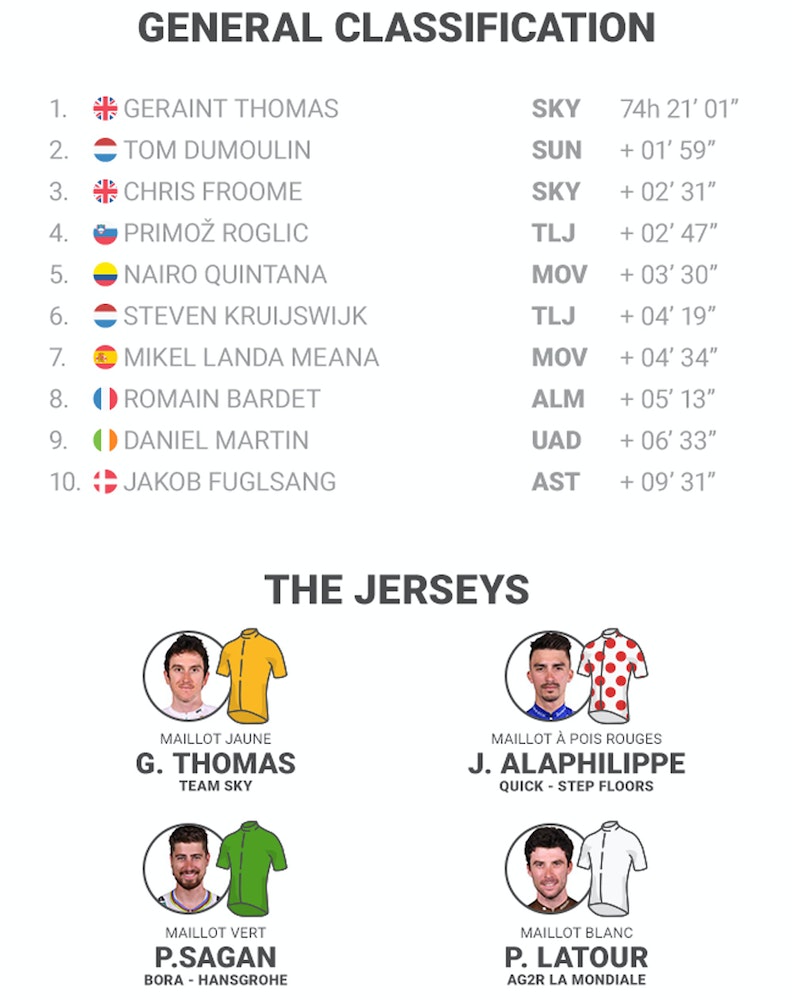