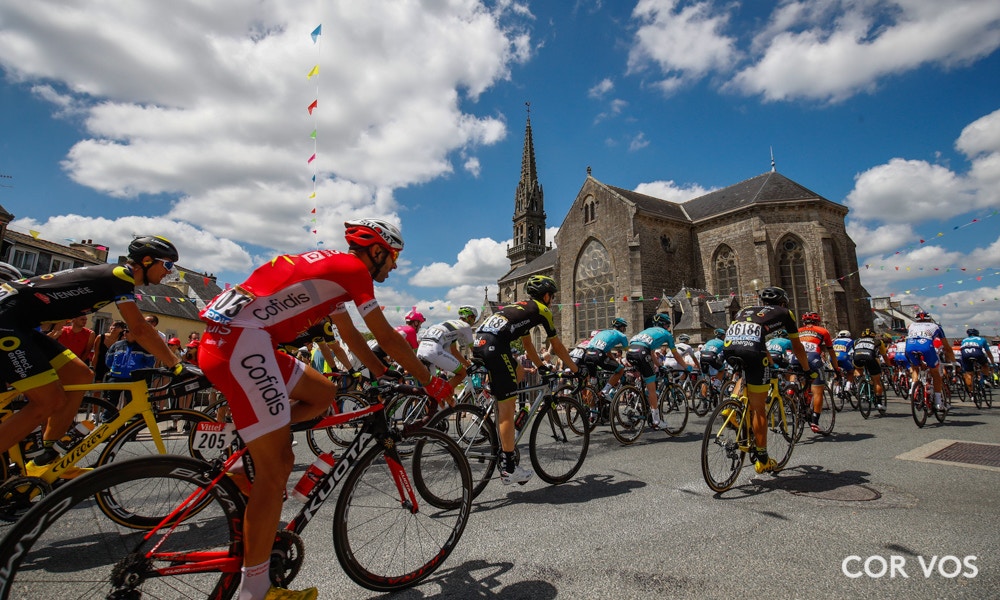 World champion Peter Sagan clocked up his second stage win of the year’s Tour, extending his lead in the green jersey competition when he reached the line first in Quimper. He went head to head with Sonny Colbrelli (Bahrain-Merida) on the uphill drag to the finish, then powered clear in the final metres to finish well ahead.

Philippe Gilbert (QuickStep Floors) was prominent inside the final kilometre, trying to get clear. While he couldn’t snap the elastic, he had enough left to take third at the end. Alejandro Valverde (Movistar), Julian Alaphilippe (QuickStep Floors) and Dan Martin (UAE Team Emirates) completed the top six, and showed promise in advance of Thursday’s harder finish.

“The parcours was a little bit like the Ardennes,” said Sagan at the end. “Up, down, left, right, narrow roads. It was a little technical…it was a nice parcours.

“I was a little bit lucky, because Colbrelli was coming close again. My teammates did a very good job. From the middle of the stage, they were pulling on the front. They brought me into a good position for the final climb. Sky then started to pull full gas. Gilbert came over and tried to attack, but we got him. After that Van Avermaet started too early and in the end he pulled a very good sprint for me and Colbrelli.” 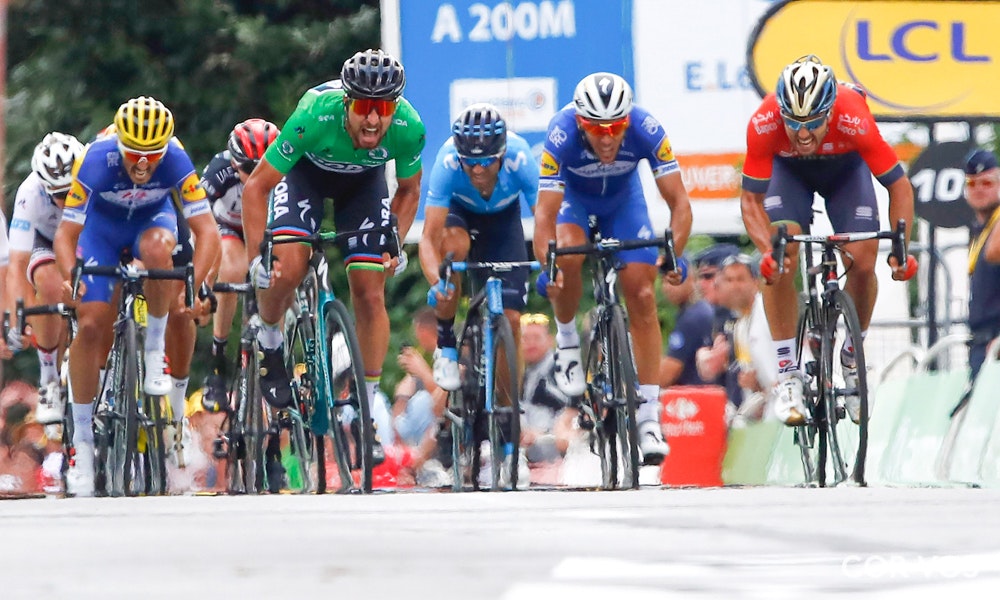 The 204.5-kilometre stage had the most difficult profile yet, with multiple climbs evoking the Ardennes Classics. A break went clear at the start and facilitated a long solo move by Sylvain Chavanel (Direct Energie), then a later push by his teammate Lilian Calmejane and Toms Skuijns (Trek-Segafredo).

The duo were recaptured with 12 kilometres to go, then things stayed largely together until the line. Gilbert made a big bid for success but race leader Greg Van Avermaet (BMC Racing Team) brought the other riders up to him. The sprint then played out with Sagan proving best.

Van Avermaet ended the day two seconds clear of teammate Tejay Van Garderen, gaining that small margin when he took second in the bonus sprint near the end. Gilbert jumped a place to third overall, three seconds back, while Geraint Thomas (Team Sky) slipped to fourth.

Van Avermaet had talked about trying to win in yellow and admitted to being disappointed that things didn’t work out. He crossed the line in seventh. “Philippe [Gilbert] went pretty early. I tried to catch him because he was also close on GC,” he explained. “Then I went maybe a bit too early to launch my sprint.

“They told me it was only 260 [metres], but it was closer to 350. It was pretty hard to keep [it going]. But there was still a lot of distance between me and Peter [Sagan], so I think the best guy won. I wanted to do better, I have to try another time.”

“I thought I’d have a chance in the last kilometre,” he said, “but I haven’t really been working on my sprint lately. I’ve been working on the big mountains. When we slowed down before the last bit I thought about jumping, but with the corner it was impossible. Unfortunately, the group came back together and it was just a sprint. But I am happy to get a result under the belt already in the Tour. It is a nice little opener for tomorrow.”

Stage five of the Tour de France was far lumpier than the preceding stages, and indeed had the profile of an Ardennes Classic race. Starting in Lorient, running to Quimper and lasting 204.5 kilometres, it included numerous climbs. Five were categorised, but others might well have been given official status too. Instead, the organisers decided to limit the categorisation to that handful. 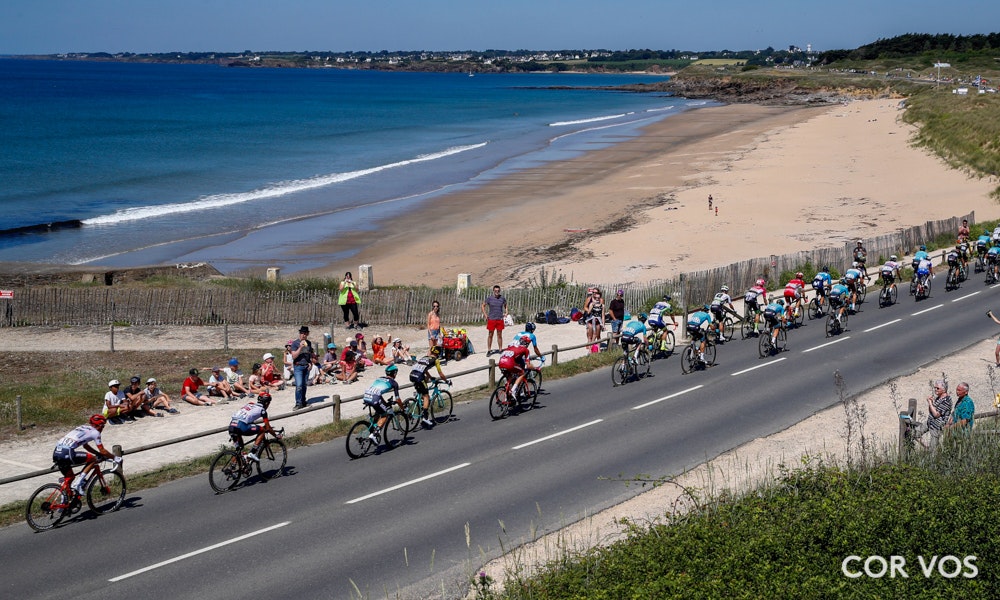 The day’s intermediate sprint came at Roudouallec, 92.5 kilometres after the start, while the first climbs were the category four Côte de Kaliforn (km 106) and the equally-ranked Côte de Trimen (km 113).

Those were followed by three category three ascents; the Côte de la Roche du Feu (km 140.5), Côte de Menez Quelerc’h (km 159.5) and the Côte de la Montagne de Locronan (km 181). The last of those came 23.5 kilometres from the end of the stage, while the day’s bonus sprint was atop the Côte de la Chapelle de la Lorette, 12 kilometres to go. Things then concluded with a one-kilometre ramp up to the finish line.

Prior to the start, two important riders were forced to withdraw from the race. Australian Michael Matthews, double stage winner and green jersey in last year’s Tour, dropped out due to illness; also exiting was the Belgian Classics and GC rider Tiesj Benoot, who was injured in a crash on Tuesday. 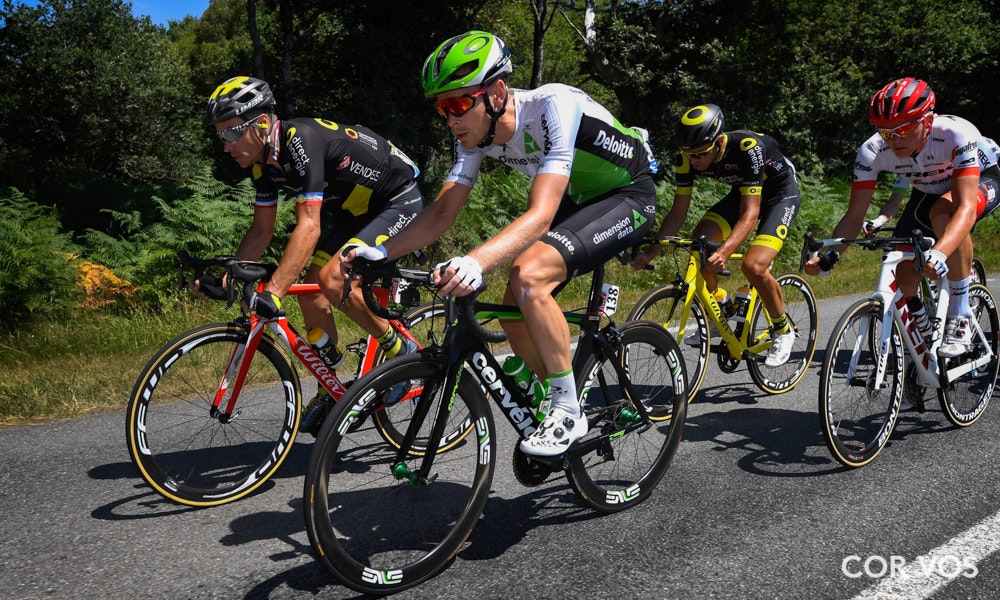 Best placed of those was Calmejane, who started the day one minute 51 seconds behind Greg Van Avermaet. The 2017 stage winner became race leader on the road after 15 kilometres, and the break continued to gain time. After an hour of racing it was four minutes clear, and after 80 kilometres it was almost five and a half minutes.

Chavanel was feeling good and jumped clear just before the day’s first climbs. He had half a minute at the summit, where he took the prime. The uphills were less rewarding for the sprinter Mark Cavendish (Team Dimension Data), who was dropped. He was able to get back on but that gapping didn’t bode well for the later, tougher climbs.

Chavanel continued alone, opening a 45 second lead over the other breakaway riders, and taking the points atop the day’s second climb. On the descent, Gesbert crashed out of the breakaway but didn’t seem badly hurt. 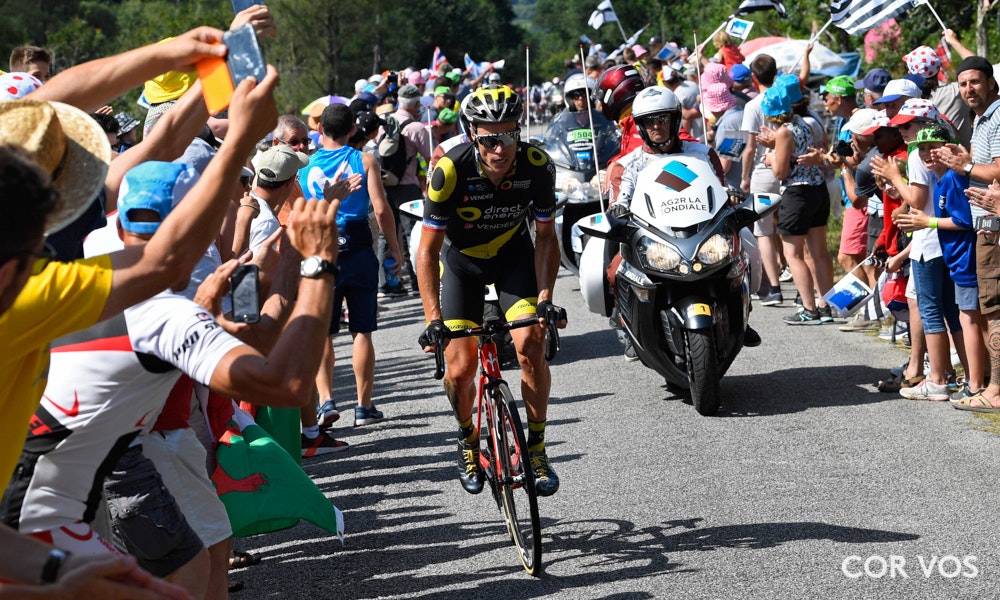 Cavendish slipped back once again on that second climb, with fellow sprinters Marcel Kittel (Katusha-Alpecin) and Dylan Groenewegen (LottoNL-Jumbo) soon following suit. There were still 70 kilometres remaining at that point, but their difficulty underlined how tough the day was.

With approximately five kilometres to go until the day’s third climb, Skuijns attacked in pursuit of Chavanel. The latter’s teammate Calmejane and Edet went with Skuijns, dropping Vermote and De Buyst. Meanwhile, back in the bunch Chris Froome (Team Sky) had a mechanical problem. He was forced to change his bike but chased back on afterwards.

Chavanel was caught by the three chasers, but not before he took top points on the day’s third climb, the category three Côte de la Roche du Feu (km 140.5). The bunch continued to draw closer and with 50 kilometres remaining, was just one minute 46 seconds back.

Once onto the day’s fourth climb, the Côte de Menez Quelerc’h (km 159.5), Calmejane and Skuijns dropped the others. Skuijns then pushed ahead to grab the mountain points before waiting for Calmejane. Edet managed to get back up again but was distanced once more on the day’s final categorised climb, the category three Côte de la Montagne de Locronan (km 181). Skuijns was once again strongest there, securing the mountains jersey.

The two leaders pushed on but the bunch drew ever closer to them. Calmejane forged ahead of Skuijns in a bid to take the seconds at the bonus sprint, but Julian Alaphilippe (QuickStep Floors) jumped clear of the bunch and got past him before the line. Race leader Greg Van Avermaet (BMC Racing Team) also passed him and took second, giving him a time bonus of two seconds. 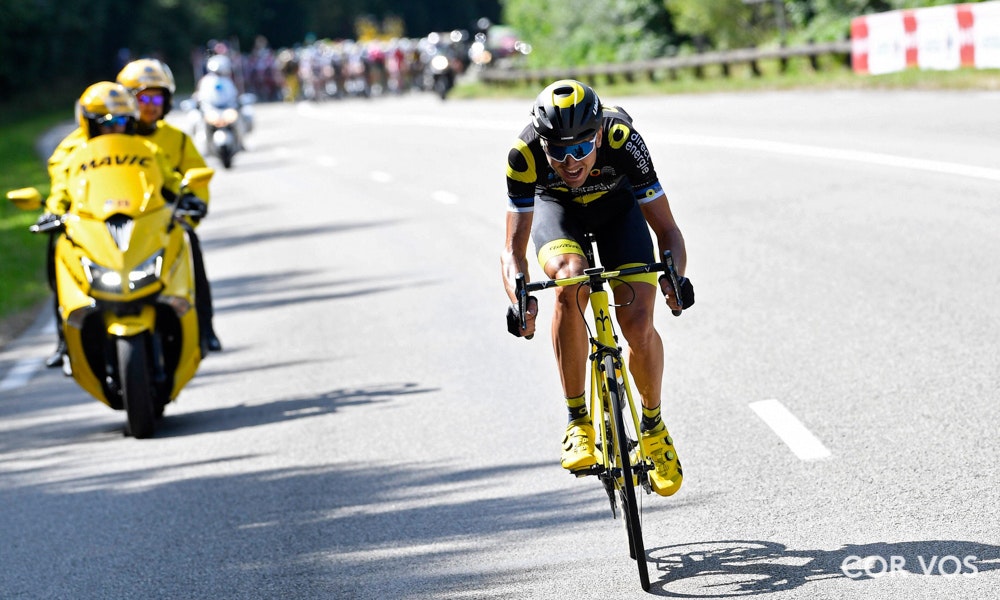 Direct Energie rider Rein Taarmae surged clear inside the final ten kilometres and got a 20-second gap, but was caught with five kilometres to go. Team Sky pushed the pace and brought the riders towards the kilometre to go point, from where the road would pitch up towards the line.

BATTLE FOR THE STAGE WIN

Chasing success in his distinctive explosive manner, former world champion Philippe Gilbert (QuickStep Floors) made his move with 700 metres to go. However he was marked by Van Avermaet and others, then Peter Sagan (Bora-hansgrohe) and Sonny Colbrelli (Bahrain-Merida) went head to head. Sagan was strongest in the drag race to the line, pulling well clear at the end to take his second stage win of the race.

In doing so, he bolstered his lead in the green jersey competition. However, he noted that if he had won on a flat stage he would have got more. “I think today was less points than normal,” he said. “It was just 30 points, I think, but better than nothing. Tomorrow is another day.”

Van Avermaet had hoped to be atop the stage-end podium; he was as race leader, but also wanted the panache of being the stage winner while wearing yellow. “There were still a lot of GC guys there,” he said of the final climb. “It was most important to get into a good position on the bottom of the climb for the finish, then try to do a good result. Of course, there could always be splits. But I was good there, I was pretty happy how it went. It was just that the sprint…I went a bit too early, but all the rest went perfectly.”

His second place in the final bonus sprint gave him a two-second boost over his rivals. He is keeping Thursday’s tougher finale in mind and knows that such a buffer is useful.

“I wanted to do one day extra in yellow,” he said. “It is always a nice feeling. Tomorrow we have the Mur de Bretagne, it is going to be super hard. We will see how it goes. I am in good condition and the team works perfectly, so hopefully, we can do a good try tomorrow.”

However, he knows that the stage end might not be quite suited to his talents. “It is quite hard. It is more for the punchers, I think, the Alaphilippe types. But I can be up there, I think, not losing too much time. We will see how it goes.” 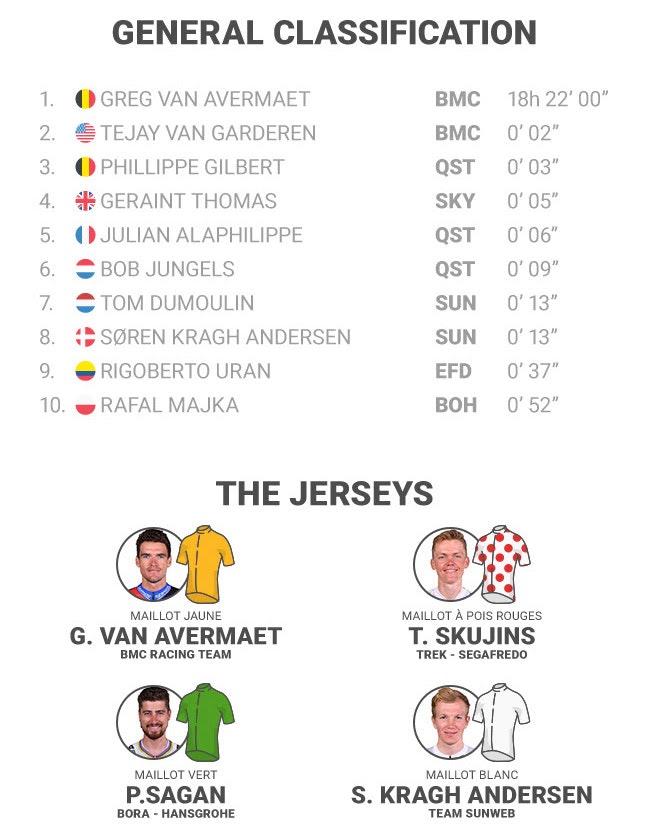 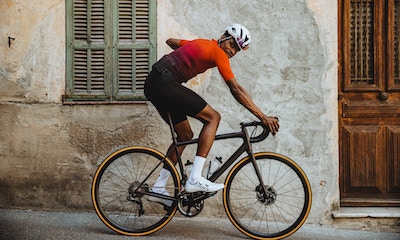 With classic lines, no aero claims and an emphasis on overall ride quality, Specialized has gone back to the future with its latest road platform, the Aethos...