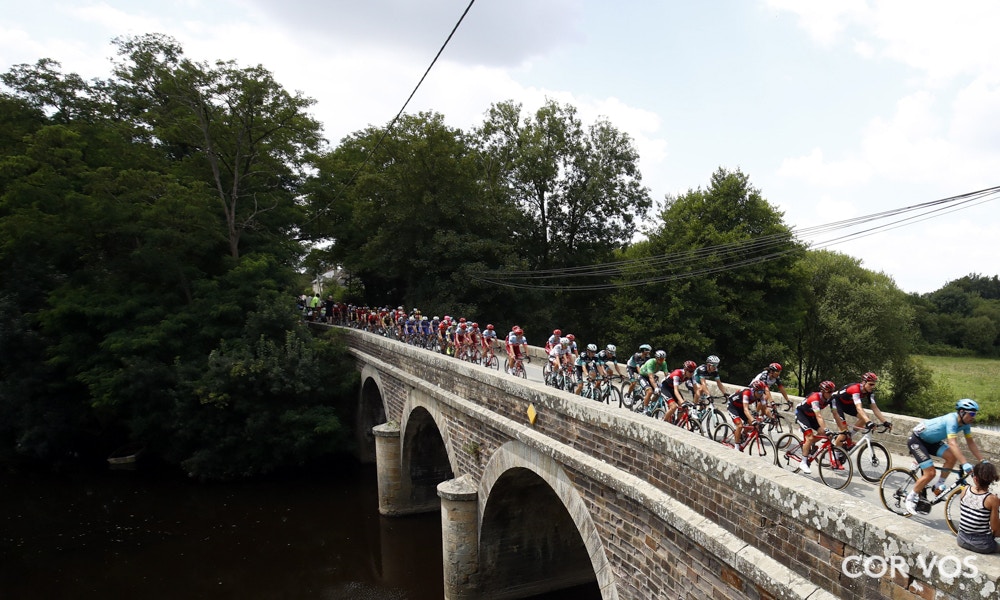 Victorious on stage one, dropped in the team time trial on Monday, Fernando Gaviria was back on top at the end of the fourth stage of the Tour de France on Tuesday. The QuickStep Floors rider timed his sprint perfectly, beating world champion Peter Sagan (Bora-hansgrohe) and André Greipel (Lotto-Soudal) into Sarzeau.

“Andre and Peter were really strong, but I went faster and took the victory. Some days you win, some days no. This is cycling. We will see on the other flat stages, but for sure we will try again.”

Greipel came from a long way back and actually passed Gaviria, but faded closer to the line. Still, he will be encouraged by his showing and motivated for the remaining sprint stages. As for another big-name sprinter, Mark Cavendish (Team Dimension Data) did what he could to be a factor on the stage, but slid backwards inside the final 200 metres and placed 21st.

He’s four stages away from Eddy Merckx’s Tour de France record of 34 stages, but is yet to show the form he will need to get closer to that mark. Speaking after the race, he said that he found himself in the wrong position, being hemmed in momentarily when Gaviria went, but would try again. 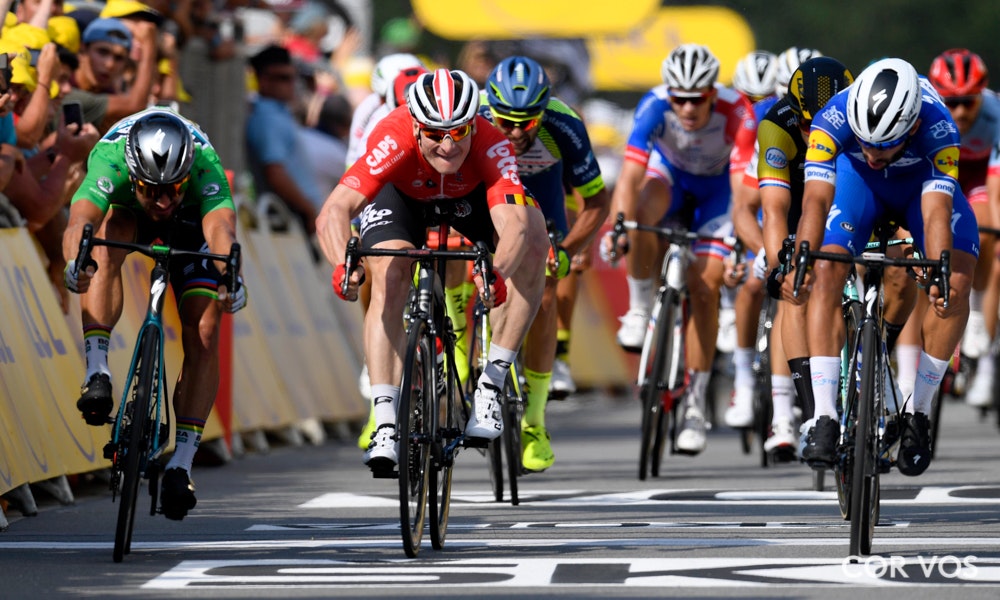 “It was a nice day in the beginning but it got pretty hectic in the final,” he said. “The guys did a really good job to protect Richie [Porte] and me. They were always on the front and we spent a lot of energy in the wind but as we saw, anything can happen and by staying up at the front we were in the safe zone. We protected ourselves and with no time loss, it was a perfect day.” 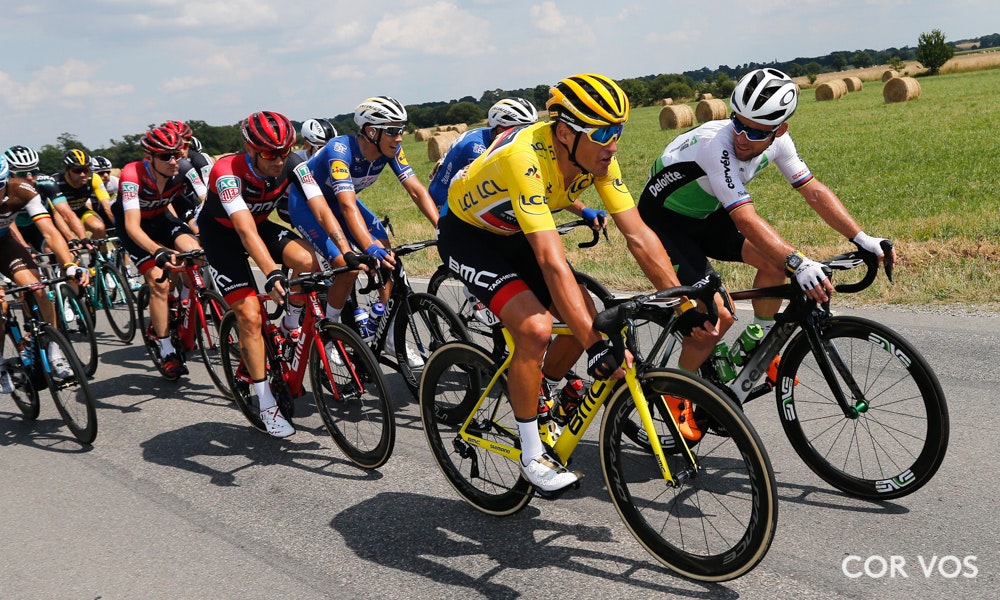 The stage was marked by a four man break containing Guillaume Van Keirsbulck (Wanty-Groupe Gobert), Jerome Cousin (Direct Energie) and Cofidis duo Anthony Perez and Dimitri Claeys. These opened a gap of almost 8 minutes, rode strongly but were ultimately caught with just over a kilometre remaining.

General classification rider Rigoberto Uran (EF Education First-Drapac) had a nervous chase after being involved in a big crash with just over five kilometres to go. The 2017 Tour runner-up managed to get back to the peloton, but Ilnur Zakarin (Katusha-Alpecin) wasn’t so fortunate; he lost 59 seconds.

After Monday’s team time trial, a more typical Tour de France stage was held on Tuesday. The fourth stage of the race took the riders 195 kilometres from La Baule to Sarzeau, following an undulating route but one lacking any serious climbs.

The sole categorised ascent was the category 4 Cote de Saint-Jean-la-Poterie, which was just 800 metres long and which topped out 135.5 kilometres after the start. There was also an intermediate sprint at Derval (kilometres 97.5) and a time bonus sprint at Limerzel (kilometre 156.5).

As was the case on Saturday and Sunday, the day’s break went right away after the drop of the flag. This time four riders banded together, with the Cofidis duo of Anthony Perez and Dimitri Claeys joining up with Jerome Cousin (Direct Energie) and Guillaume Van Keirsbulck (Wanty-Groupe Gobert). They quickly got two minutes, making Van Keirsbulck leader on the road.

After 45 kilometres of racing the gap soared to just under eight minutes, then chasing from the BMC Racing Team of yellow jersey Greg Van Avermaet hewed this back to seven minutes. Lotto-Soudal then started chasing for André Greipel, with QuickStep Floors and Groupama-FDJ then coming through. 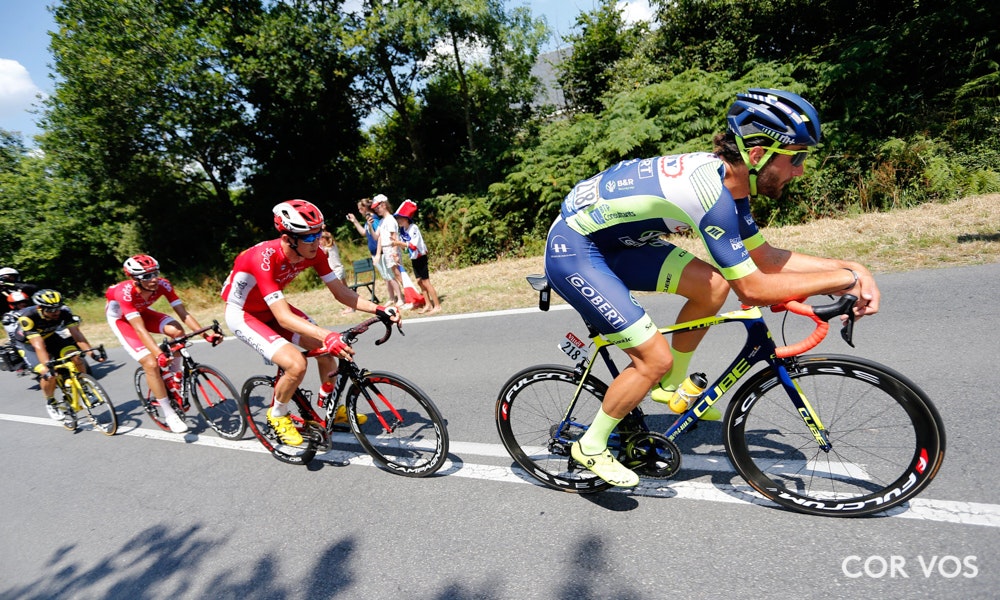 Van Keirsbulck took the intermediate sprint in Derval, going across the line ahead of Claeys, Perez and Cousin. Back in the bunch, stage one winner Fernando Gaviria (QuickStep Floors) beat Greipel, green jersey wearer Peter Sagan (Bora-hansgrohe) and John Degenkolb (Trek-Segafredo) for fifth. The gap there was just under three and a half minutes, and dropped to two minutes with 70 kilometres left.

Ten kilometres later the break reached the day’s sole categorised climb, one minute 40 ahead of the bunch. Perez took the prime there. They raced on through the 50 kilometres to go banner, where the gap was down to one minute 15 seconds. However after an otherwise-inconsequential crash in the peloton, the gap increased again to over two minutes.

It was back up to two minutes 50 seconds at the time bonus sprint at Limerzal, where Claeys crossed the line ahead of Van Keirsbulck and Perez. The pace in the peloton then began to ramp up.

With ten kilometres left, the gap was down to one minute and eight seconds. However the break knew all was not lost and pushed harder and harder, trying to stave off the chase. With five kilometres left they still had 39 seconds, and their odds improved when a big crash delayed the peloton.

One of those held up was last year’s runner-up Rigoberto Uran (EF Education First-Drapac) who, along with his team, chased frantically to try to get back up.

They managed to bridge with just over three kilometres left. Less successful was another GC rider who was held up, Ilnur Zakarin (Katusha-Alpecin). He was left lacking support and ultimately lost 59 seconds.

The breakaway riders still had hope but hard driving by the teams behind cut the gap to just 14 seconds with two and a half kilometres left. Three of the four were reeled in with 1.2 kilometres left, while Van Keirsbulck held on for a few seconds more.

Into the final kilometre Mark Cavendish’s Team Dimension Data were working hard for the Briton, but he missed out on the final push for the line. André Greipel (Lotto-Soudal) made a big effort up the right, Sagan marked him and came past against the barriers, but Gaviria was speeding on the left and seized the win.

“Timing was a big issue on this race,” Sagan said. “Had I been on André’s wheel when he launched the sprint, the result might have been different. But well, it was fine. We didn’t do such a great lead out because we were busy chasing a very strong breakaway. The secret to beat Gaviria might be to wait for some mistake from him… Or for some more climbs to come.” 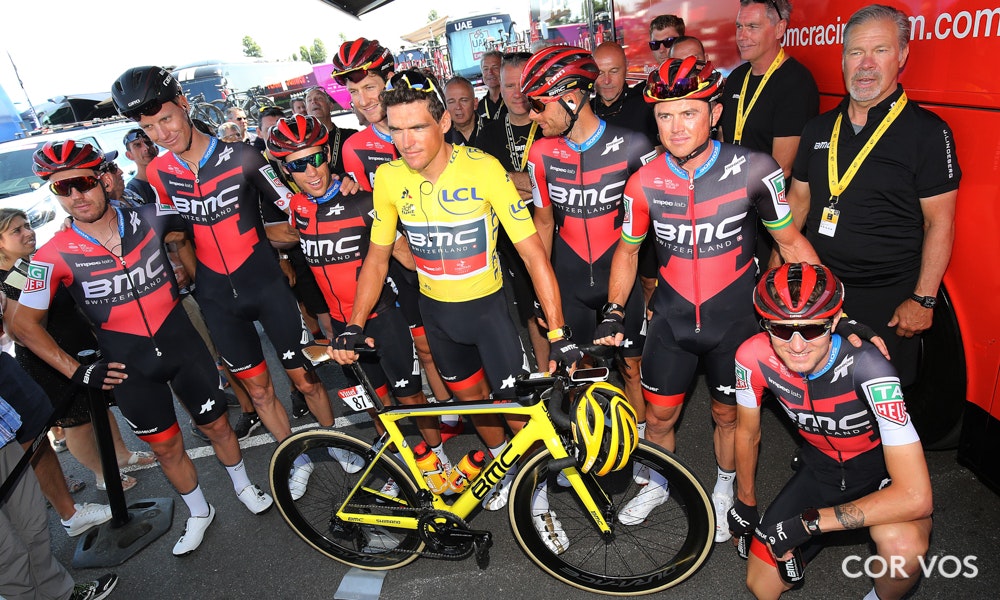 He knows that Wednesday’s stage is tougher and could offer opportunity. So too does Van Avermaet.

“I think tomorrow will be another hard stage. It will be important to stay in front and stay safe but in the end, I think we can do more in the final,” he said. “We have a strong team. I will try to be up there and I would like to make a good result. I’ve enjoyed my day in yellow but I also came here to try and get a stage win and I think tomorrow is my first big opportunity. A win in yellow would be even more incredible.” 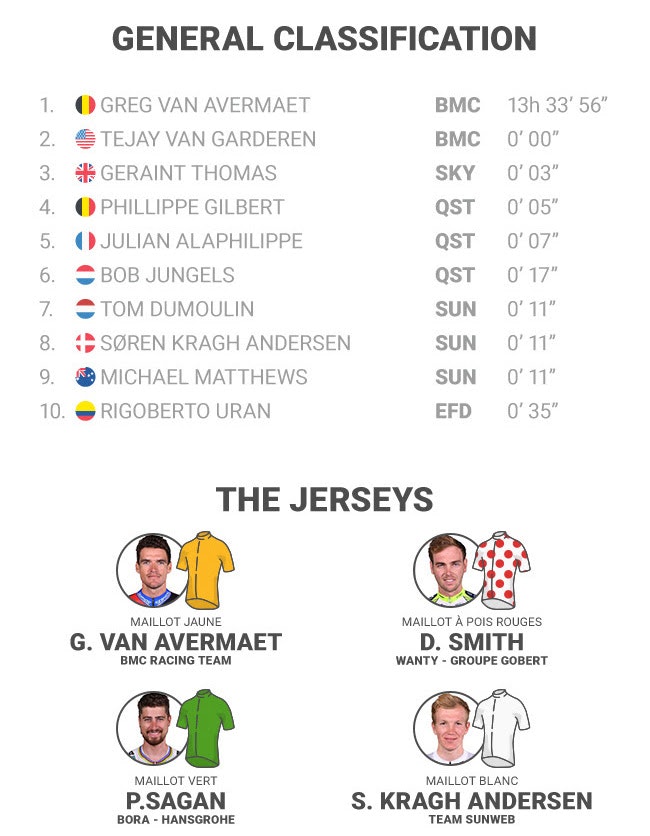