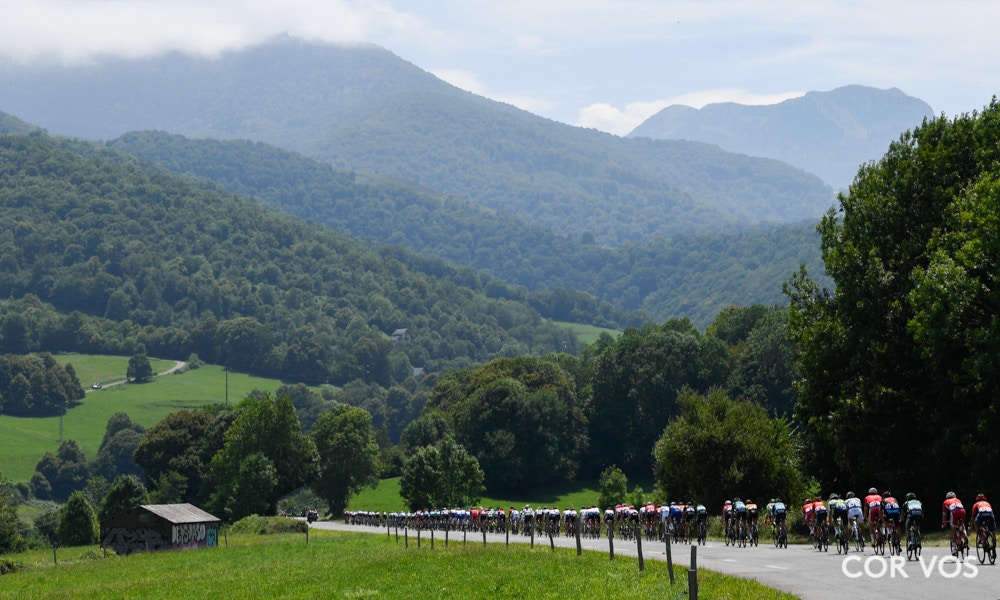 Former ski jumper Primoz Roglic used his nerve, his low centre of gravity and his improving Tour form to win stage 19 of the race, plummeting down the descent of the Col d’Aubisque and opening an ever-widening gap over the other general classification riders.

The LottoNL-Jumbo rider had attacked repeatedly on the uphills but didn’t open a lasting gap until this final downhill, taking chances in the technical turns and finally snapping the elastic. He raced in to pick up the second Tour de France stage win of his career, and to overtake Chris Froome (Team Sky) for third overall. 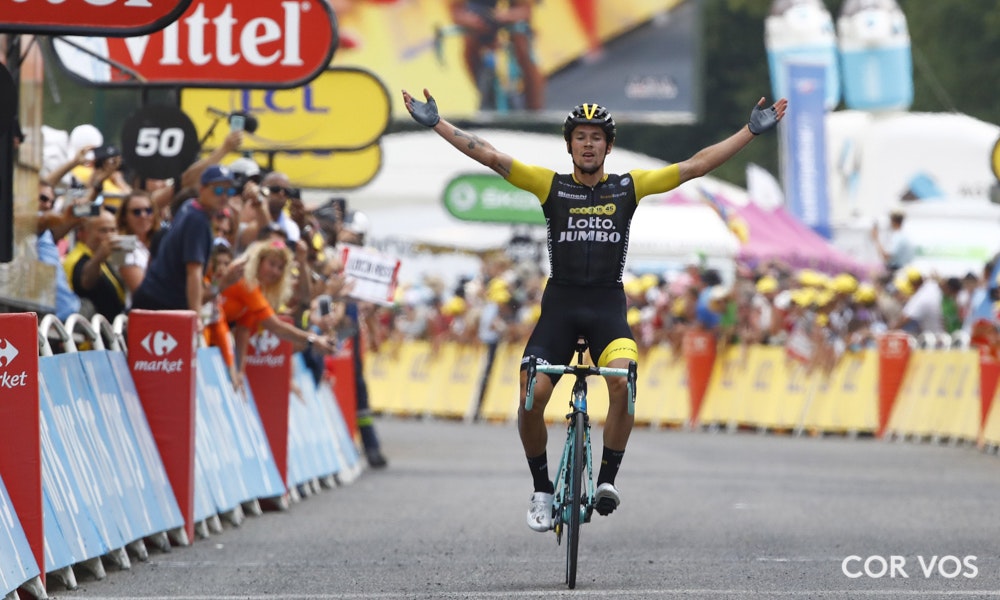 Froome had struggled throughout the finale, being dropped more than once on the Aubisque. He got back to the group and, together with the rider in second overall, Tom Dumoulin, did most of the chasing of Roglic inside the final kilometres. However their 19 second deficit saw him slip to fourth overall. He is still two minutes 37 seconds behind Thomas and 32 behind Dumoulin, but now finds himself 13 seconds adrift of Roglic.

Froome is normally one of the best time trialists in the Tour, but has been visibly tiring this week and won’t be confident that he can make up ground on Saturday.

Bardet had been on the attack during the stage and was trying to turn his Tour around with some success. “I believed that I could get a victory today right up to the finish,” said Bardet, third over the line. “But Roglic was just too strong; there was nothing I could do. I really did fight right to the end, but I am very disappointed.

“Today I wanted to attack from the Col du Tourmalet right up to the finish. I really thought I was going to get a stage win, but I just didn’t make it. It’s not that I didn’t have the legs, but when you lost 15 metres on a guy like Roglic, you just can’t get it back. He is just too good. But you also need luck; I haven’t had any luck on this year’s Tour de France, and I didn’t have it today either.”

Stage 19 of the Tour was not only the final mountain leg; it was arguably the most difficult of the race. Starting in the pilgrimage town of Lourdes and running 200.5 kilometres to Laruns, it was a saw-toothed affair with six categorised climbs.

These started gradually with two category four ascents, namely the Côte de Loucrup (km 7) and the Côte de Capvern-les-Bains (km 40), and then continued with the category one Col d’Aspin (km 78.5) and the famous hors category Col du Tourmalet (km 108). 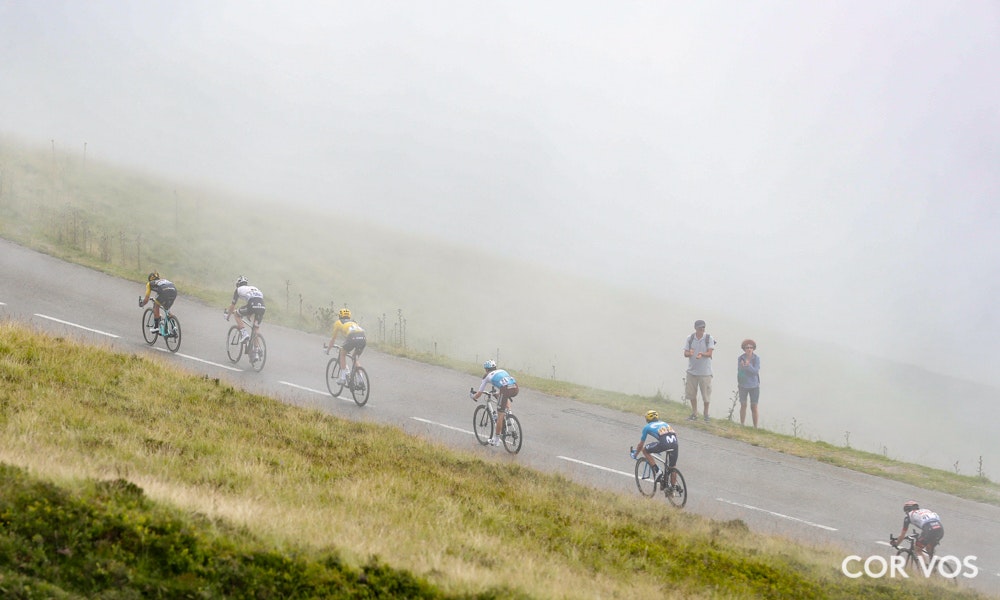 After a 34 kilometre descent, the race would then tackle the category two Col des Bordères and then the hors category Col d’Aubisque. That last summit would be followed by a fast 20 kilometre drop down to the finish.

The Tourmalet is the most-visited climb in the Tour, having been used 82 times in the history of the race. The Aubisque (74 times) and the Aspin (73) are the next two most utilised. In short, this terrain is utterly steeped in Tour mythology.

Soon after the drop of the flag Damien Gaudin (Direct Energie), Lukas Pöstlberger (Bora) and Silvan Dillier (AG2R) surged clear prior to the Côte de Loucrup. Dillier took the solitary point atop the climb.

Those slopes put the green jersey Peter Sagan (Bora-hansgrohe) under pressure. He’s normally a solid climber but was quite badly hurt in a crash earlier this week. He is far clear of his rivals in the points classification, with 467 points to Alexander Kristoff’s 196, but must get to Paris to seal a record-equalling sixth win in that contest. Losing contact early on potentially spelled danger in terms of the time cut. 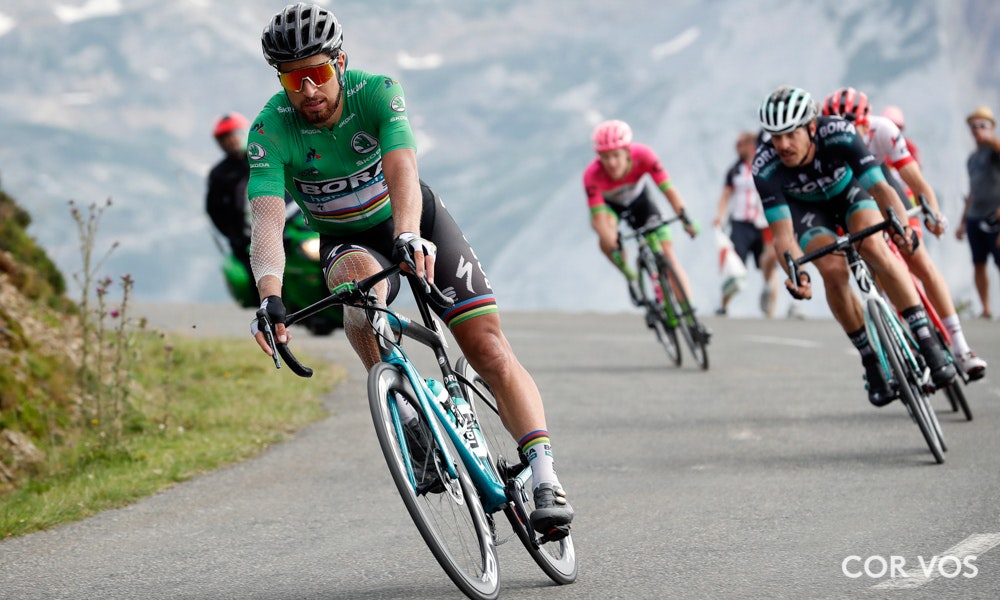 They, in turn, were chased by another sextet, namely Romain Hardy (Fortuneo-Samsic), Mikel Nieve (Mitchelton-Scott), Daniele Bennati (Movistar), Marcus Burghardt (Bora-hansgrohe), Tom-Jelte Slagter (Dimension Data) and Bauke Mollema (Trek-Segafredo). They caught the Barguil group after about 35 kilometres of racing, while the others continued to lead the race over the Capvern-les-Bains climb. Gaudin was first to the top there.

The chasers finally bridged with 58 kilometres on the clock, then Gaudin took the intermediate sprint at Sarrancolin (km 59.5). The 18 leaders then raced on to the Col d’Aspin and had a three minute 10 second lead with 131 kilometres to go.

Various riders got dropped from the break on the climb, while Alaphilippe took the points at the top of the Aspin and thus ensured he had enough to win the polka-dot jersey outright. Barguil and Mollema were second and third there. 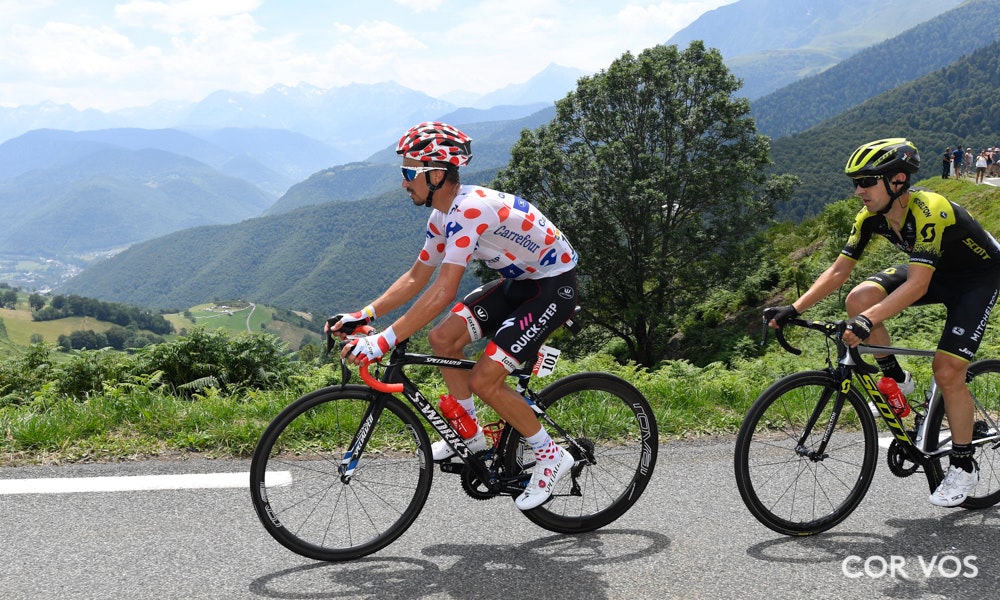 Once onto the Tourmalet, attacks were being fired off from the bunch. Ian Boswell and Ilnur Zakarin (Katusha-Alpecin) went away with Mikel Landa (Movistar), then Romain Bardet (Ag2r La Mondiale), Jakob Fuglsang (Astana) and Rafal Majka (Bora-hansgrohe) jumped clear.

THE ACTION RAMPS UP

With 100 kilometres remaining, there were eight leaders: Yates, Nieve, Alaphilippe, Jungels, Kangert, Barguil, Izagirre and Amador. They were two and a half minutes ahead of Bardet, Zakarin, Fuglsang and Landa, while the bunch was a further 15 seconds behind.

Alaphilippe led the group over the top of the Tourmalet (km 108), with Jungels, Nieve, Barguil, Kangert and Izagirre next. Majka had dropped the other chasers and was 45 seconds back, and the bunch was at two minutes 50 seconds.

The front group swelled to 11 riders with 65 kilometres to go when Landa, Bardet, Zakarin and Majka joined. They had a three minute 15 second gap ten kilometres later. Once onto the Col des Bordères, Bardet attacked and was followed by Majka and Landa. The others got up to them soon afterwards, then Alaphilippe sat up. Barguil and Nieve also slipped back before the summit, where Kangert took top points. 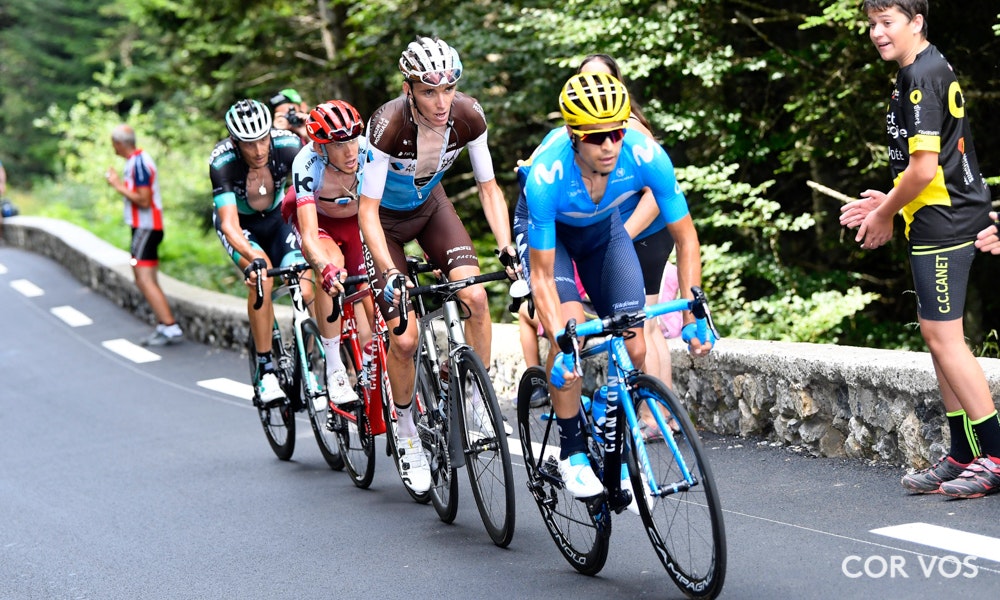 They continued on to the Aubisque, where Steven Kruijswijk (LottoNL-Jumbo) attacked very early on. Tom Dumoulin (Team Sunweb) surged soon afterwards, but was closed down by race leader Geraint Thomas and others. Dan Martin (UAE Team Emirates) then had a go and got a gap, but his intention of slipping clear was frustrated when Primoz Roglic (LottoNL-Jumbo) jumped away. The others got up to him, but Roglic went again.

While Dumoulin and Thomas were able to stay with the rider who started the day in fourth overall, Chris Froome (Team Sky) was put into difficulty some 11 kilometres before the top. He joined up with Martin and teammate Egan Bernal, while ahead, with 25 kilometres to go, Landa, Bardet, Majka and Zakarin were still leading, 25 seconds ahead of Thomas, Dumoulin, Roglic, Kruijswijk, Izagirre and Jungels. Soon afterwards Froome, Martin and Bernal joined the latter group.

Majka was nervous about the closing gaps and jumped away two and a half kilometres before the summit. Roglic then made a move a couple of minutes later, catching Bardet and Landa, but being marked by Dumoulin and Thomas.

That group came back together, then Kruijswijk went again. He didn’t get far, but Bardet attacked hard. Roglic went with him and drove the pace, opening a gap of several seconds over Dumoulin and the others.

Majka was still out front and went over the summit alone, a handful of seconds ahead of Roglic, who had been caught by several of the others. Chris Froome had been dropped again, but raced hard to get back up to the group on the descent.

Roglic continued to push hard on the fog-obscured descent, trying to both get up to Majka but also to open a gap over the others. He achieved the first of those goals with 17.5 kilometres to go, and started to open daylight soon afterwards.

The descent became less technical and the others were able to get up to him; however, things became trickier again and Roglic again moved clear. Dumoulin and Thomas were next in line, chasing hard, while Zakarin had been struggling with the speeds and was distanced. Kruijswijk also lost ground.

Roglic’s gap started to really inch outwards with eight kilometres to go. He had the motivation of both the stage win and also chasing a podium place in Paris, and continued to take chances. He was helped by his body shape, with his low centre of gravity giving him an edge over the taller riders. He is also a former ski jumper and, therefore, pretty much fearless.

Froome was worried about losing his podium place and was leading the chase heading into the final five kilometres. Dumoulin took over with 4.3 kilometres to go, but Roglic continued to gain ground. He went under the two kilometres to go banner with a 17-second lead and was looking good.

Dumoulin and Froome continued to trade turns, but Roglic was visibly faster and more committed. He sped into the finish line, driving it all the way home in his search for GC improvement. Thomas led the chasers in 19 seconds later, with Bardet, Martin and Majka next over the line. 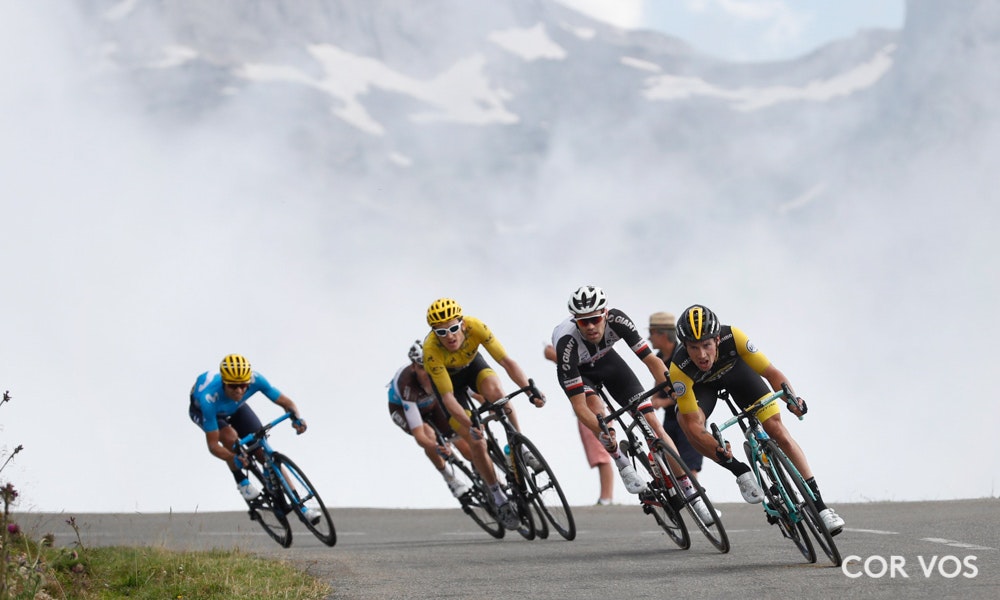 For Roglic, it was a day of double success. The stage win was a big boost, but so too his move up to third overall and his prospects of a strong TT on Saturday. “We will all start from zero,” he said. “The time trial is a new day, a new focus. I will do my best.”

So too will Froome, but the sense is that momentum is now on the side of the Slovenian rider rather than the Briton.