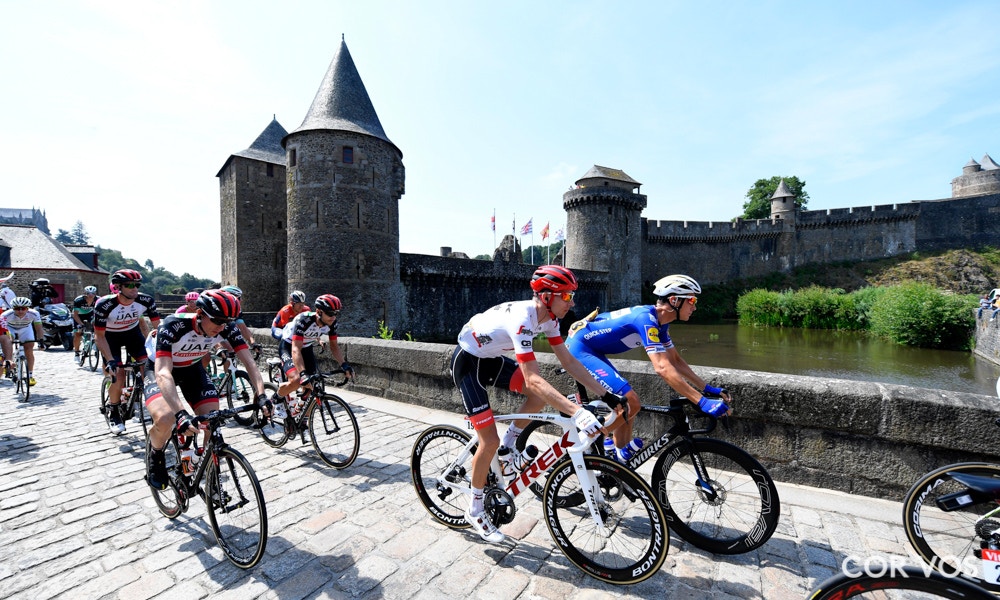 Last year he made a big breakthrough when he won the final stage of the Tour de France in Paris; on Friday, Dylan Groenewegen confirmed his status as one of the best sprinters when he blasted home first on stage seven. Timing things perfectly in a chaotic gallop, the Dutchman beat Fernando Gaviria (QuickStep Floors) and world champion Peter Sagan (Bora-hansgrohe) into Chartres, thus showing his speed against two of the most successful sprinters in the sport.

He crossed the line with his finger over his lips, likely a reference to anyone who was questioning his form. 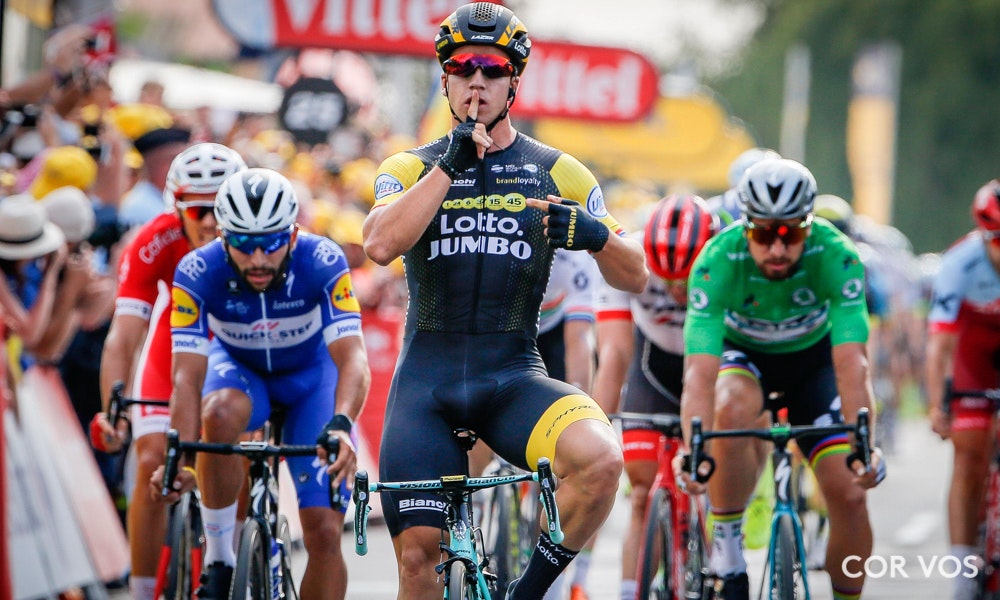 “I didn’t have good legs at the beginning of the Tour. But they were going better every day. I said, ‘give it some time’ and now the legs are there. The timing was missing [before] but today we did it. It is amazing. I am really grateful for myself and also my team.

“I was behind Kristoff, and he was going. I was staying on his wheel and I was thinking, ‘now is the moment.’ I went with 200 metres, I think, and that was good enough. I hope [to win more stages]. The legs are good now, I am very happy this way. We will celebrate tonight and then maybe next day [tomorrow] again.”

Arnaud Démare (Groupama-FDJ), Christophe Laporte (Cofidis), John Degenkolb (Trek-Segafredo), Daryl Impey (Mitchelton-Scott) and André Greipel (Lotto-Soudal) completed the top eight. Mark Cavendish was to the fore for much of the sprint, but faded inside the final 50 metres and was tenth. He’s inching closer to where he wants to be but isn’t yet at his top condition.

“I was following quite good wheels, but it was choppy,” he said afterwards in the post-stage TV interview. “I was just picking wheels. That seemed to be good, but when I wanted to go, QuickStep [Gaviria] and Bora [Sagan] just have a different kind of level, like top speed.

“I was floating towards the end, I was quite excited. Then I kicked…I looked at my power, it was pretty good, but I couldn’t match them. Then I had a come together with Alex [Alexander Kristoff] at the end. I think it might have been my fault. That just stopped me dead.”

Cavendish is arguably the best-ever sprinter in Tour history. He has notched up 30 career stage victories and is aiming for the all-time record of Eddy Merckx, who has 34. He is still intent on getting closer to that but knows it won’t be easy. 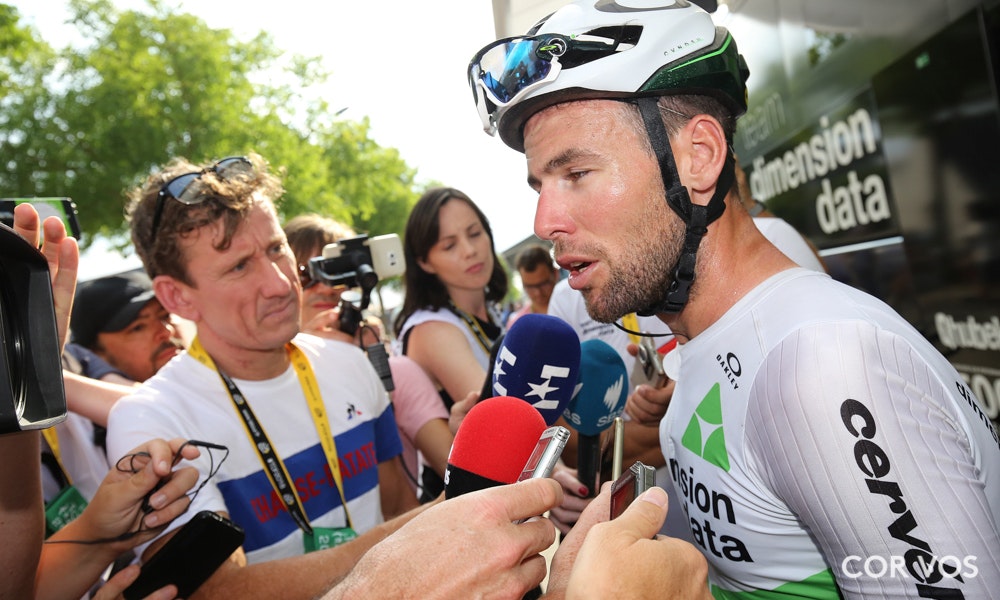 “I will just keep trying. My back is against the wall all the time. It is not going to be easy for us to win here, but we will keep trying,” he said. “We have a great morale on this team. Things just have to go right. I lost some guys at that corner with two kilometres to go, that was the crunch point.”

Cavendish suggested that some riders are taking chances and riding dangerously. “If those cycling journalists talked about some real choppy riders more than me, instead of trying to get clicks,” he said, suggesting that some are not doing their jobs correctly in assessing the sprints. However, he declined to name the riders involved.

“It was a pretty calm day but you still had to be focused as guys tried twice to force echelons and that made it kind of nervous,” he said. “But overall, it was a good day. It was a long day and it was a little bit more relaxed but with a really fast final. I am happy I could take those three extra seconds in the bonus sprint. It was an open sprint with nobody in front so it was good to give it a try and take some seconds to make sure I am safe for the next stage.”

Given the likely bunch sprint on Saturday and given his known ability over the cobbles, the 2017 Paris-Roubaix winner could well still be in yellow after Sunday’s stage. However with the big mountains rearing up after that, he is making the most of things while he can.

Following two hillier days, stage seven of the Tour de France reverted to a much flatter profile. Predicted to suit the sprinters, the 231 kilometres between Fougères and Chartres featured just one categorised climb. This was the category three Côte du Buisson de Perseigne, which was located 120 kilometres after the start.

The climb was followed by the intermediate sprint of Berd’Huis (km 168) and the bonus sprint of Nonvilliers-Grandhoux (km. 200). Just 31 kilometres remained between the latter and the finish line, where it was expected that a bunch gallop would settle things. 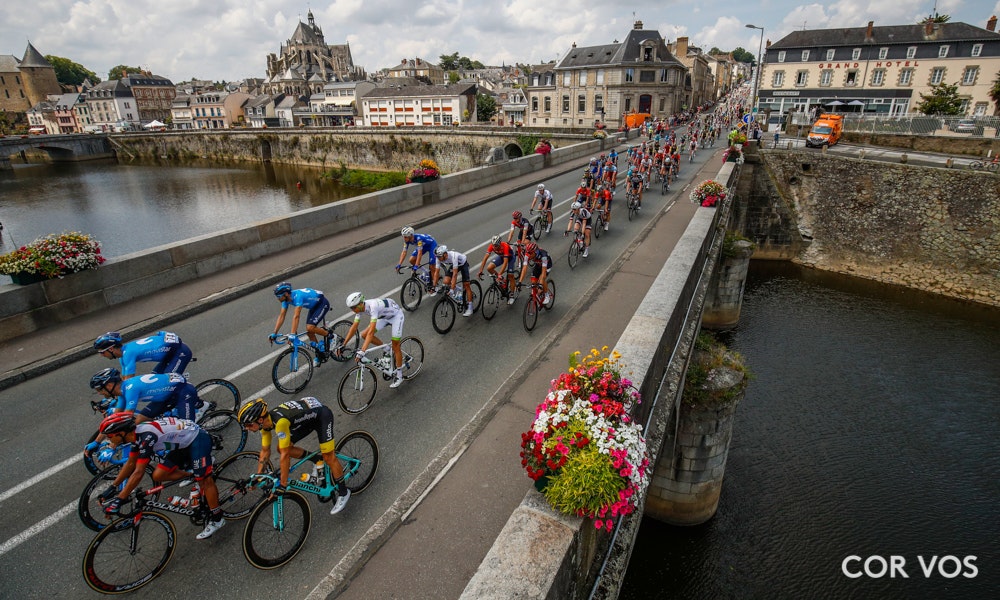 Attention was focussed on Mark Cavendish, who often takes a few days to get up to speed in the Tour, but who has not figured at all thus far. His best stage placing prior to today’s start was 21st and, as the Tour de France website noted, he has never been as quiet in the race.

“46th in the points classification with 11 points, he has never been so low in the hierarchy of the sprinters after six stages in the Tour. In his first participation in 2007, he was 24th with 33 points after six stages,” it said. That showed the kind of pressure Cavendish was under to try to turn things around.

Inside the first five kilometres, Thomas Degand (Wanty Groupe Gobert) attacked and quickly got a minute. However, he was caught soon afterwards, with a big break then getting clear. That too didn’t last terribly long out front. Once those riders were back in the fold, Degand’s teammate Yoann Offredo clipped away with 195 kilometres left. 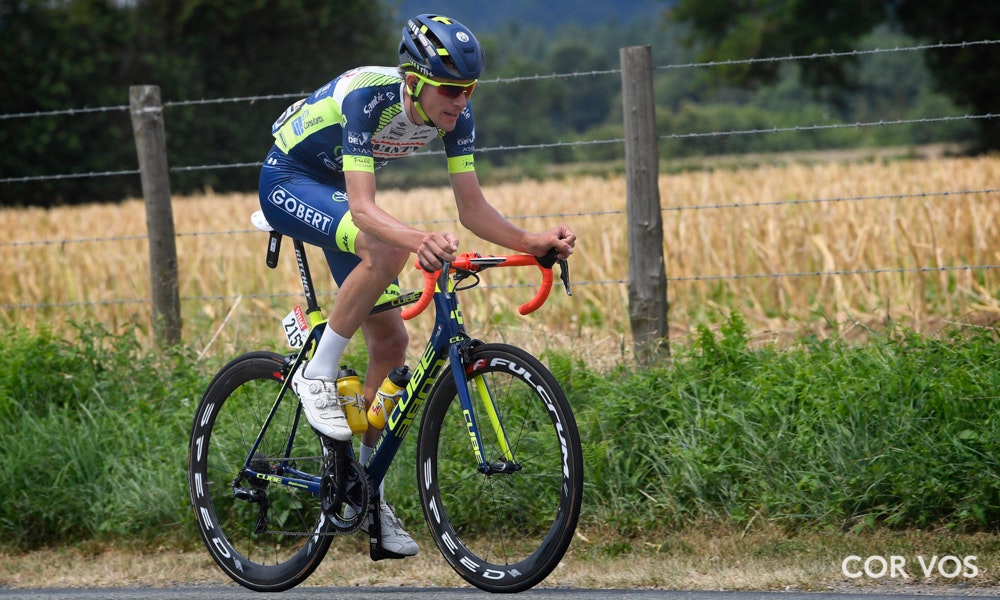 The peloton wasn’t worried and over the course of the next ten kilometres, he built a lead of three minutes 15 seconds. His lead increased to nine minutes, but then riders from the sprinters’ teams started tapping through. That cut away at his advantage and following the day’s sole categorised climb, he had four minutes with just over 100 kilometres to go.

With 97 kilometres left on the clock, the pace ramped up considerably in the peloton. The QuickStep Floors team was prominent and broken things apart in crosswinds, splitting the bunch into three. Thursday’s stage winner Dan Martin (UAE Team Emirates) and Mark Cavendish (Team Dimension Data) were amongst those distanced. However hard chasing brought things back together, and also reeled in Offredo with 91 kilometres left.

Seven kilometres later Laurent Pichon (Fortuneo) jumped away and built a lead of two minutes. He continued on to take the intermediate sprint (kilometre 168), while Fernando Gaviria (QuickStep Floors), Peter Sagan (Bora-hansgrohe) and Alexander Kristoff (UAE Team Emirates) were best of the bunch.

The acceleration brought the peloton to within 45 seconds of Pichon, but an easing back of the pace allowed him to pad that lead again. With 50 kilometres left it had increased to one and a half minutes, but the sprinters’ teams ratcheted things up again and caught him with 38 kilometres to go.

The day’s bonus sprint took place seven kilometres later and there the yellow jersey Greg Van Avermaet jumped clear and was able to further pad his lead. Then, with the finish and teammate Andre Greipel in mind, the Lotto-Soudal squad rode at the front to keep things together for the sprint. Mark Cavendish’s Team Dimension Data was also active, while LottoNL-Jumbo moved up just inside the final three kilometres.

FDJ were trying to set things up for Démare, but it was another who opened his stage-winning account at this year’s Tour. Groenewegen sped past Kristoff and was able to hold off Gaviria and Sagan, grabbing the second Tour stage win of his career. Judging by his post-stage self-confidence, his third may well arrive soon.