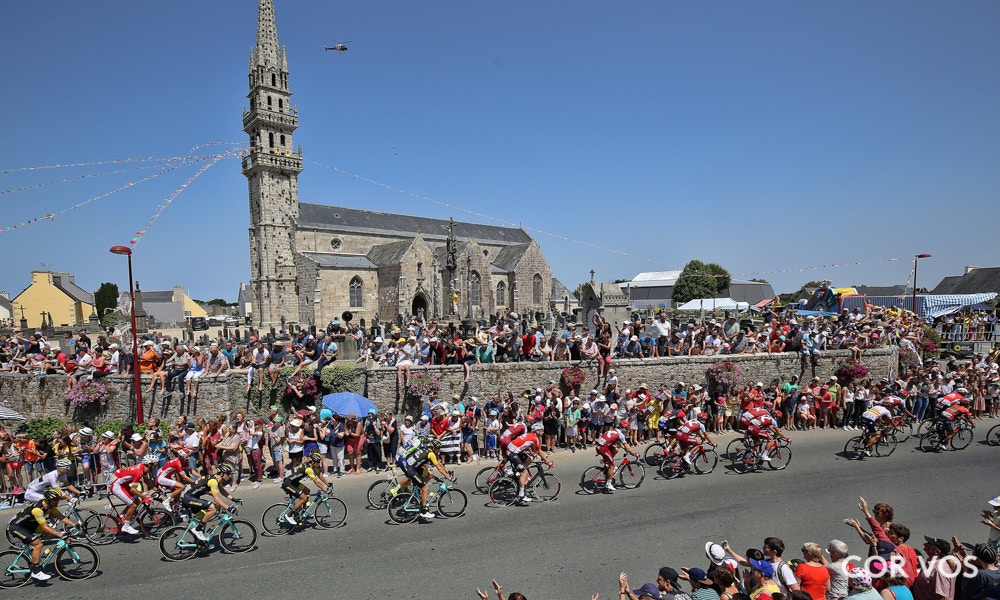 Five years after he won his first stage at the Tour de France, Dan Martin scooped his second with an assertive victory on stage six. The Irishman attacked 1.2 kilometres from the top of the Mur de Bretagne climb, riding strongly despite a headwind and holding off the hard-chasing riders behind.

“I hope my wife hasn’t just gone into labour,” Martin joked, speaking well ahead of the due date in October. “It is a great feeling to actually get a win again. I’d so many second places since I last won at the Tour. I was a bit nervous because of the headwind. Then the race went so hard on the first part of the climb. I saw everybody was on the limit and there were no teammates left. Why not have a try? So I did.” 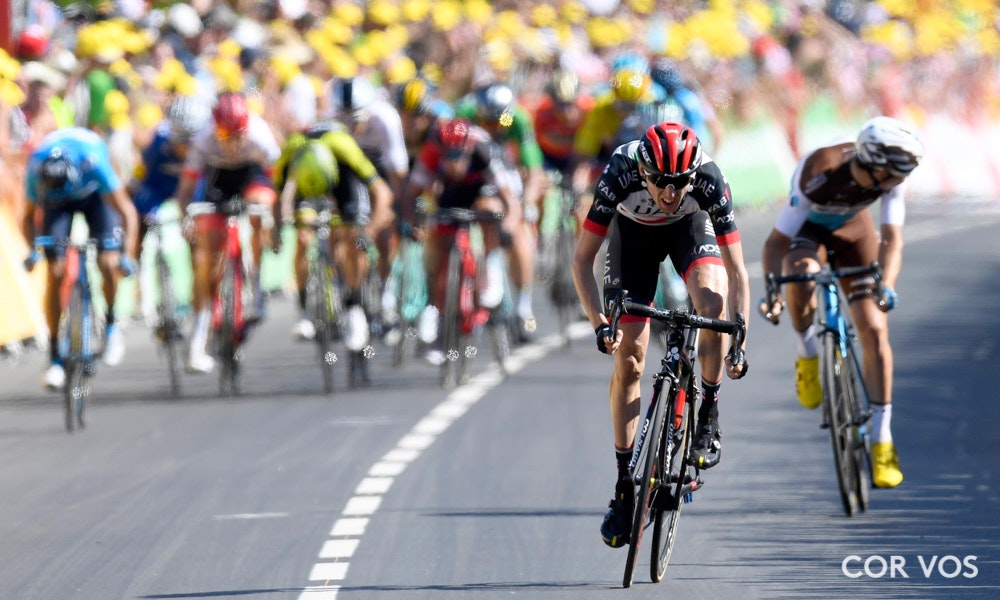 When the race last visited the climb in 2015, Alexis Vuillermoz attacked early and Martin was best of the rest. Perhaps thinking of that, he surged long before the line this time around, and had the strength to hold on. “The legs were just there all the time. Maybe it was adrenaline,” he said. “I felt really, really good yesterday, but didn’t quite get an opening in the final to be able to have a go. That was a good sign for today.

Both were however better than Romain Bardet (Ag2r La Mondiale) and Tom Dumoulin (Team Sunweb). Each were delayed by mechanical issues and while Bardet was able to chase back on, he expended vital energy. He cracked on the climb, finishing 31 seconds down. Dumoulin chased hard but ultimately crossed the line 53 seconds behind. He was then handed a 20 second time penalty for drafting his team car during the chase back on.

“I hit the back wheel of Bardet, I think, when there was a movement in the peloton,” he said, explaining what happened to both of them. “I had a broken spoke in my front wheel, and needed to change and chase to the finish as hard as possible. It was very difficult. 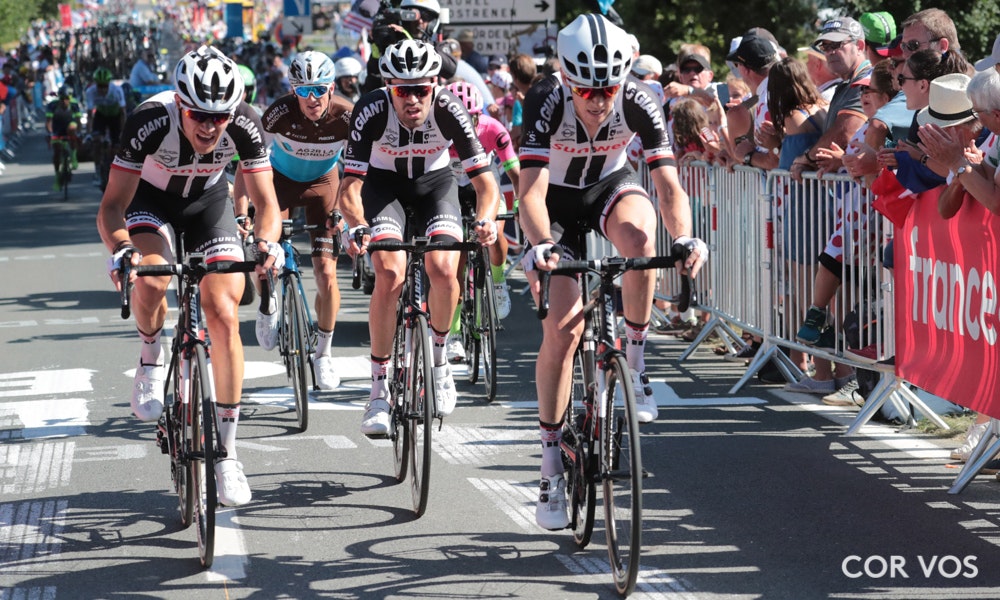 “We knew that the first five days were very lucky [for us] but we know also that bad luck could hit us. It did today. It’s very unfortunate, but it is how it is. I’m disappointed, of course. I would have liked to be in a better position in the GC.”

Richie Porte had no such issues. He rode prominently on the climb, chasing Martin after he attacked, and finished 11th. He was in the same time as Valverde, three seconds behind Martin. “It was crazy into the bottom of it,” he said. “I ended up getting stuck a bit on the front. There was not much I could do. I can’t really peel off because I don’t have much of a kick anyhow. I rode tempo then.

“I am pretty sure Greg [Van Avermaet] has held onto the jersey, which is a good result for us. Another day in yellow. A hard stage, it is nice to tick that one off.”

Van Avermaet finished one place behind Porte in 12th. He held yellow, although Geraint Thomas reduced his deficit by two seconds after he was second in the bonus sprint. Van Avermaet is now three seconds up on Thomas, and five ahead of his own BMC Racing teammate Tejay Van Garderen. The American finished 17th and conceded six seconds to Martin. He is now five seconds adrift of the race lead.

As was the case on Wednesday, stage six of the Tour de France featured another lumpy profile. It also included the toughest finish to date in the race. Starting in Brest and running 181 kilometres, it featured two climbs before the halfway point, namely the category 3 Cote de Ploudiry (km 44) and the category 4 Cote de Roc’h Trevezel (km 68.5). 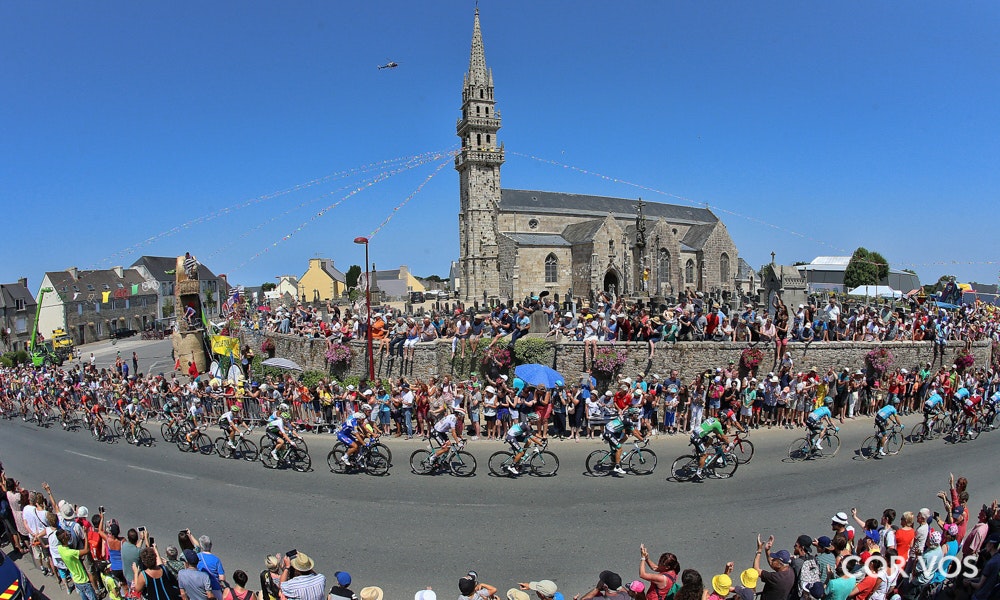 Following some undulating, uncategorised roads the day’s intermediate sprint followed at Plouguernével (km 135). The peloton would then race on to two ascents of the category three Mur-de-Bretagne, at kilometre 162 and at the finish. In between those two climbs there was another one, although the Sant Mayeux was uncategorised. Instead it was the day’s location for the bonus sprint.

As has been the case on previous stages, the day’s break went almost immediately. Anthony Turgis (Cofidis), Dion Smith (Wanty-Groupe Gobert), Laurent Pichon (Fortuneo-Samsic), Damien Gaudin and Fabian Grellier (both Direct Energie) clipped away searching for stage success or, at the very least, some TV time for their team sponsors. Smith also drew motivation from his stint in the polka dot jersey earlier this week, and knew there were solid points on offer over the course of the day 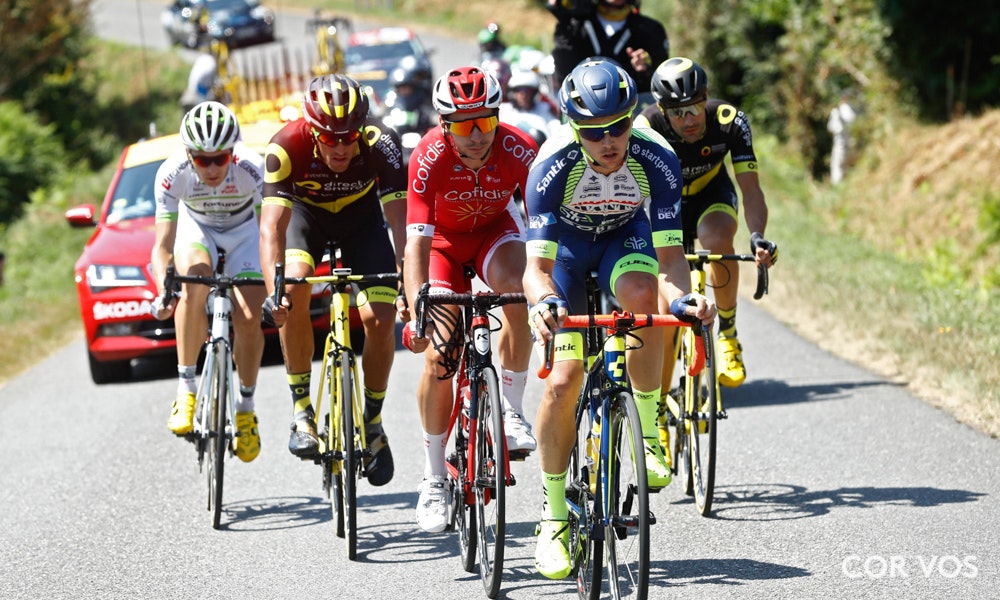 After just over 20 kilometres of racing the leaders had five minutes’ advantage over the BMC Racing Team-led peloton. This increased to six and a half minutes by the top of the Cote de Ploudiry, where Smith beat Grellier for the top points. This moved him to within one point of the KOM lead held by Wednesday’s breakaway rider Toms Skuijns (Trek-Segafredo).

Smith was also first to the top of the category 4 Cote de Roc’h Trevezel, drawing level in the mountains competition, by which point the break’s lead had increased further. Then, with just over 100 kilometres left, the QuickStep Floors team started hammering on the front of the peloton, splitting it into three in crosswinds. 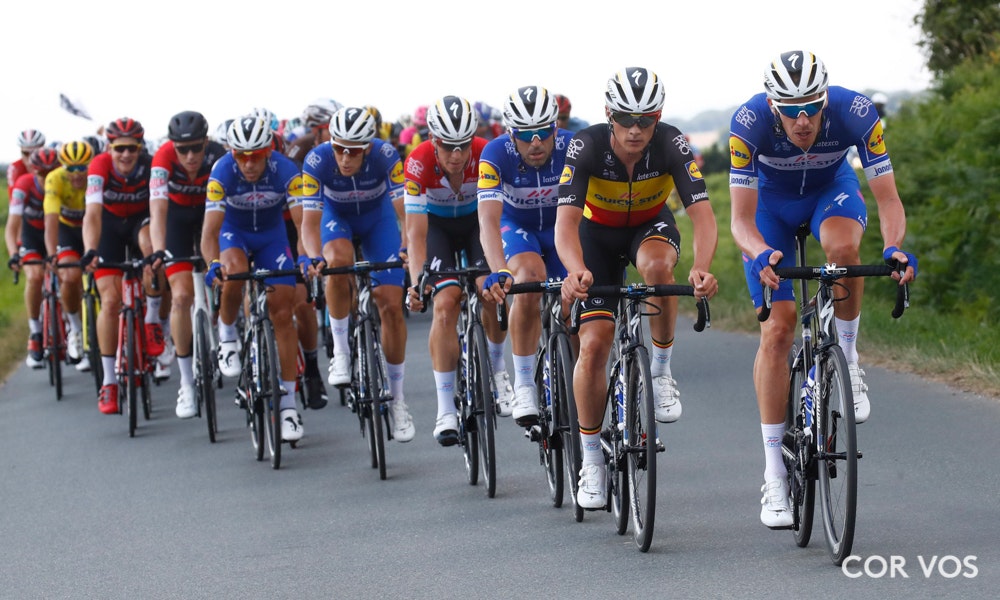 The first two groups came back together soon afterwards, but Roglic’s group was a minute and a half behind with 83 kilometres to go. Fortunately for him, strong chasing by his team plus an easing-back by the peloton enabled them to get back up to the front with 74 kilometres remaining.

Despite the drama, the big effort by QuickStep Floors ended up not having a major effect, except on the break. The hard racing hewed the advantage of those out front to two minutes and 15 seconds. By the time Pichon took the intermediate sprint at Plouguernével (km 135), it was down to one minute and 50 seconds. Gaudin then jumped clear soon afterwards, opening a gap with 44 kilometres left.

He built an advantage of over 20 seconds, but was reeled in 12 kilometres later. Grellier then upped the pace on an uncategorised climb with 31 kilometres left, but the others were able to get back up to him. Meanwhile Astana leader Fuglsang crashed behind, but landed on grass and wasn’t hurt.

He lost over a minute and had to chase hard with his team; he finally bridged just before the first ascent of the Mur de Bretagne. Out front, Grellier had something left in the tank and dropped his breakaway companions on the climb. Smith was motivated by the mountains jersey and chased hard, but both were caught before the top.

BATTLE FOR THE STAGE WIN

Skuijns jumped clear before the top to take the points on offer, defending his mountains jersey. Once over the prime line, he was passed by Jack Bauer (Mitchelton-Scott), who rode solo through the bonus sprint point with 13 kilometres to go. Geraint Thomas (Team Sky) jumped clear to take the two bonus seconds for second place, while Tomasz Marczynksi (Lotto Soudal) took third.

Bauer’s lead had grown to 21 seconds but chasing by Bora-hansgrohe whittled this down. Then, with 5.7 kilometres to go, 2017 Giro d’Italia winner Tom Dumoulin and Roman Bardet rubbed wheels, breaking spokes. Dumoulin was forced to swop wheels with his teammate

Bauer was caught with four kilometres to go. Soon afterwards Bardet pulled over and changed bikes with a teammate. The Frenchman quickly chased back on to the back of the peloton, but knew he had to try to get closer to the front to try to avoid any splits on the final climb.

Bardet was dropped on the climb, tired from his chase back. Martin led into the final 500 metres, with Porte leading the chase. Pierre Latour (Ag2r La Mondiale) set off in pursuit but was unable to close in time

Worse off were Bardet and Dumoulin, who rolled in 31 and 53 seconds behind respectively. It’s by no means game over for their Tour chances, but the time loss will make things more difficult. 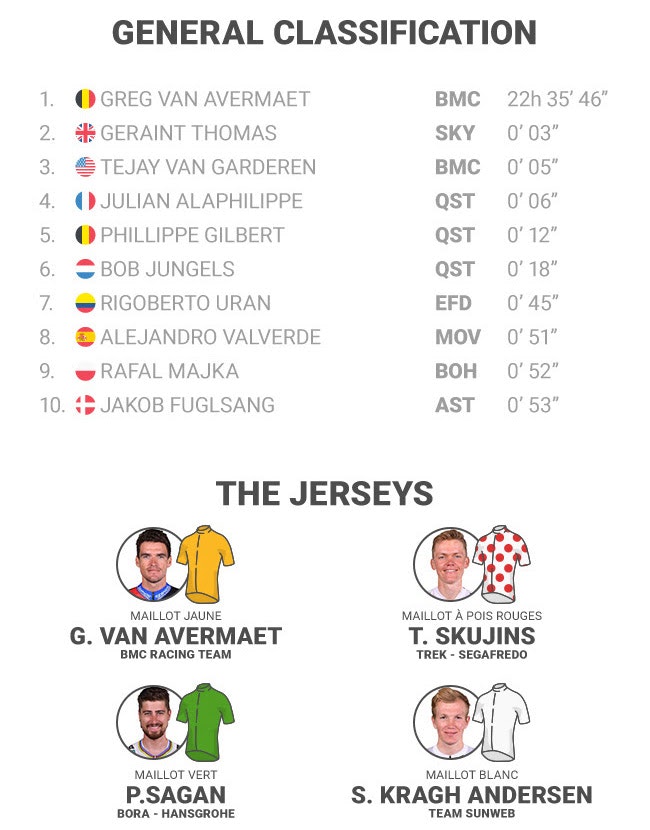