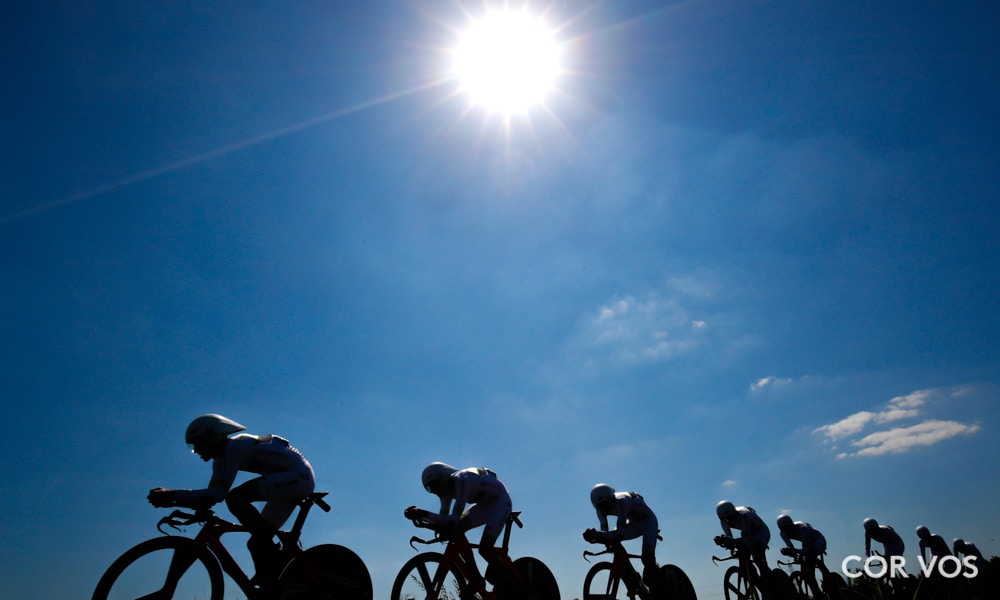 The BMC Racing Team has been searching for a long time for a new sponsor for 2019 and has an increasingly uncertain future. It received a much-needed boost on Monday when it won the stage three team time trial at the Tour de France. The American WorldTour squad was best in the 35.5-kilometre test, propelling Greg Van Avermaet into the yellow jersey.

The previous wearer, Peter Sagan, had a bad day and was dropped by his Bora-Hansgrohe team out on the course.

Chris Froome’s Team Sky was next best of the squads, giving up four seconds en route to second on the day. QuickStep Floors showed some sloppiness during the TT yet landed third, seven seconds back. 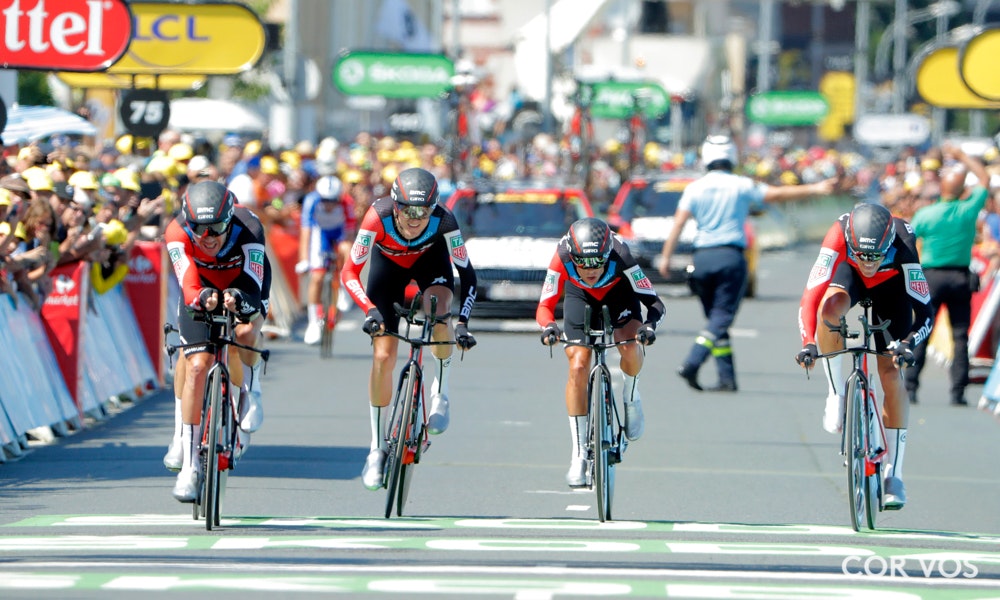 “I think we were really smooth today,” said Van Avermaet. “I think everybody did a good time trial and we were all working well together. We knew that Team Sky would be the team to beat and we also knew that it would be close. We worked together and that’s what team time trials are about. We stayed together with eight guys for a long time and on this parcours, that was the key to winning the race.

“It was a goal to get yellow in the first week. I have worn it one time already and it was an incredible feeling so, I am pretty happy to be in this position for a second time. I will enjoy it tomorrow because for any rider it is a special feeling. I want to thank my teammates as, without them, it wouldn’t have happened.”

His teammate Richie Porte was beaming after the performance. “It is a fantastic day. To win the stage with the team like that, it is fantastic. Especially with the passing of [team owner] Andy Rihs – to be able to do that in the Tour is a special feeling.

“It is a long way to Paris – it is just nice to be able to win a stage in the Tour with the team.” 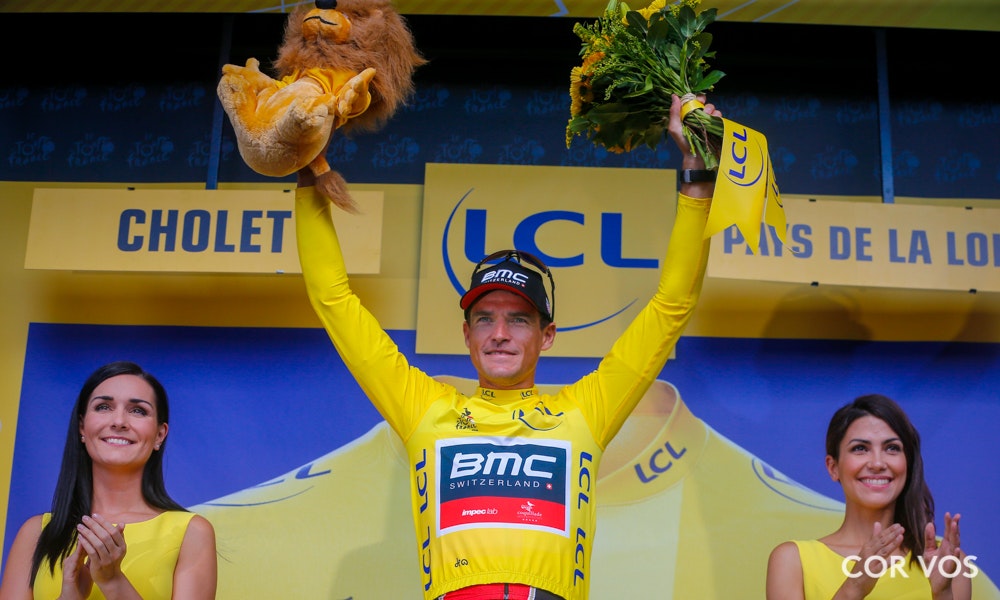 “We did an awesome job,” he said. “I think the boys were amazing. Like at the world championships, nobody was the strongest and it was the same case today. There was not much difference [between us] and that is exactly what you want. We did it perfectly today and I am really happy with the result.

“So far I am super-relaxed and the team is as well. I am very happy with how it went today and in the last days.”

The Tour’s team time trial stage was held over rolling roads and totalled 35.5 kilometres in distance. For some squads it was a chance for a stage win; for others, it was an opportunity to try to gain an early advantage in the general classification. And for key riders such as Chris Froome (Team Sky), Nairo Quintana (Team Movistar), Adam Yates (Mitchelton-Scott) and Richie Porte (BMC Racing Team), it offered a platform to try to recoup some of the time they lost on stage one.

This first team off was Yates’ Mitchelton-Scott squad, with Team Sky going next. The time lost by various riders on the opening two days put those two squads at the bottom of the team classification list, ensuring a very early start in the TTT for what are normally two marquee squads.

Mitchelton-Scott completed the course in 38 minutes 55 seconds; Sky then raced in five seconds quicker, taking an early lead. They held off Movistar, which dropped a considerable 49 seconds, and Groupama-FDJ, which was over a minute and a half back.

However, the pace wasn’t quick enough to deny Team BMC, which blasted in four seconds faster than Sky.

Last year’s Tour runner-up Rigoberto Uran and his EF Education First team conceded 35 seconds to BMC Racing Team, while Dan Martin’s UAE Team Emirates had a difficult test and was a further one minute and three seconds slower, sliding him down the GC.

Also shedding time was Romain Bardet’s Ag2r La Mondiale, which finished in 40 minutes 1 second, a full one minute 15 behind BMC. LottoNL-Jumbo finished with the same deficit.

Out on the course, world champions Team Sunweb were riding well and were 13 seconds behind the BMC Racing Team at the second time check. Cofidis were going far slower and eventually ended up three minutes and 20 seconds behind at the finish, which would end up being the slowest time of the day.

Sunweb raced on to the finish trying to make up time on the BMC Racing Team but, despite a monstrous final effort by Michael Matthews, ended up 11 seconds back.

Stage two winner Peter Sagan had the yellow jersey as a result of his victory and began the team time trial in the Tour’s most famous garment. The squad was last off and quickly got into formation, although Sagan himself appeared to suggest on Sunday that his odds of holding yellow were not very high. Still, he and the team were committed to giving it everything and seeing how things would work out. 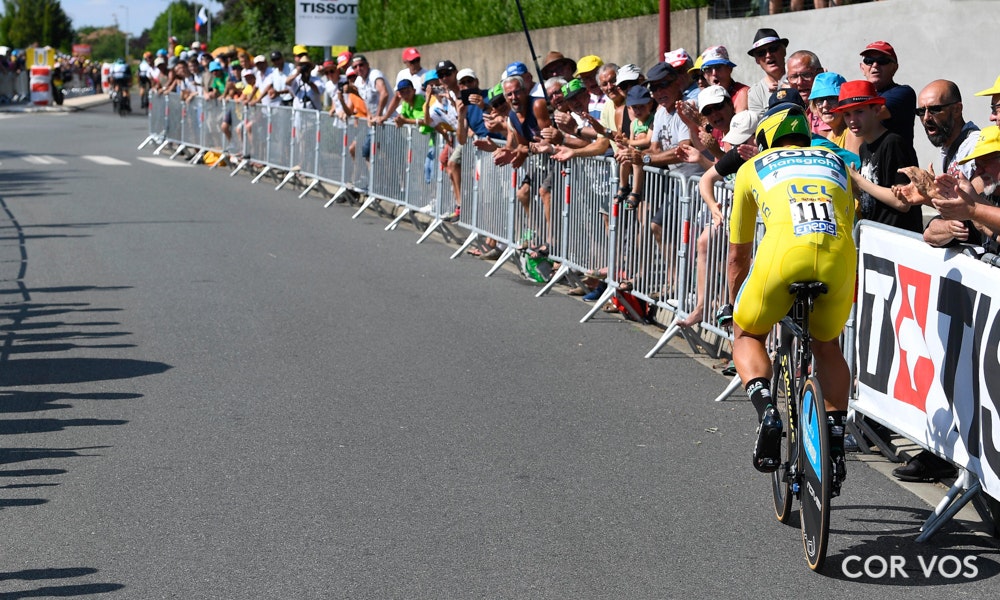 Also going flat out was the Katusha-Alpecin squad but, despite multiple world time trial champion Tony Martin’s efforts, the squad finished 52 seconds behind the BMC Racing Team’s time in a provisional sixth.

Further back, QuickStep Floors went through the first time check three seconds off the fastest time, keeping stage one winner Fernando Gaviria close. However, any possibility of him taking the Maillot Jaune again evaporated when he got dropped on one of the climbs.

Also in trouble were three of his teammates, with the team shedding riders. The squad is a past winner of the world team time trial championships but the discipline it showed in 2012, 2013 and 2016 was not evident on the roads near Cholet, with the stronger riders going too quick on the uphill and damaging the unity of the squad.

Meanwhile at the finish, 2014 Tour winner Vincenzo Nibali’s Bahrain-Merida squad raced in eighth, one minute and six seconds back. Trek-Segafredo came in soon afterwards and gave up a further ten seconds. 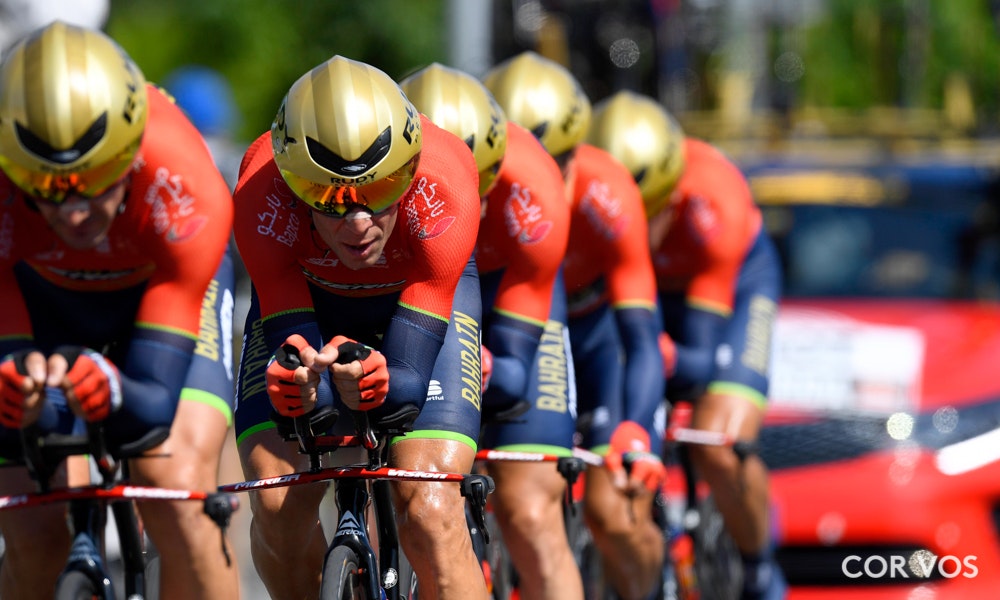 Despite the disunity on the earlier climb, the QuickStep Floors teams still had enough horsepower to go through the second intermediate check just six seconds back. In contrast, Peter Sagan was suffering heading towards that same location and was dropped by his team. With Rafal Majka the team’s general classification rider, the others couldn’t afford to wait and Sagan’s time in yellow was at an end.

The Astana team came to the finish 51 seconds behind the BMC Racing Team, hampering Jakob Fuglsang’s general classification hopes. QuickStep Floors then raced into the finishing straight, pushing all the way to the line but dropping seven seconds and finishing third.

Although Bora-Hansgrohe was still out on the course, it was clear that the German squad wasn’t going to get close to the BMC Racing Team time. The latter riders were able to start celebrating, including the new yellow jersey Greg Van Avermaet.

Bora-Hansgrohe eventually trailed in 50 seconds back in seventh place, with Sagan coming in some way after that. He is comfortably clear in the points classification and will have the more familiar green jersey to motivate him, as well as additional stage wins. 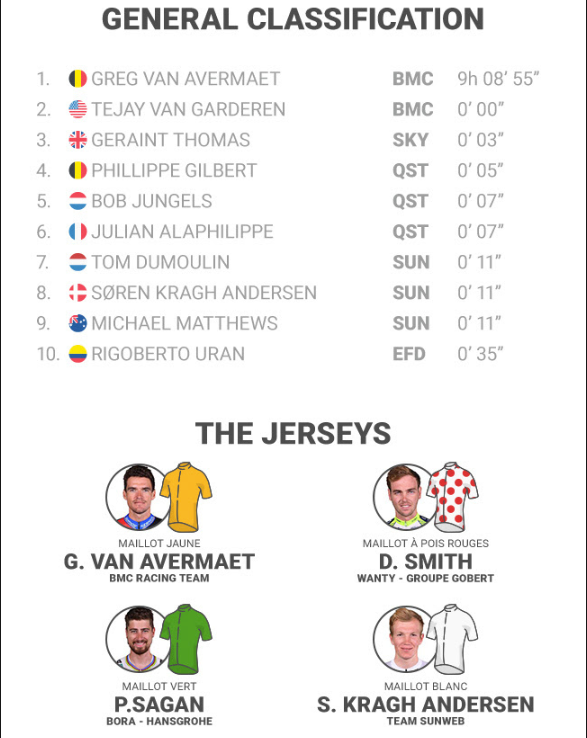