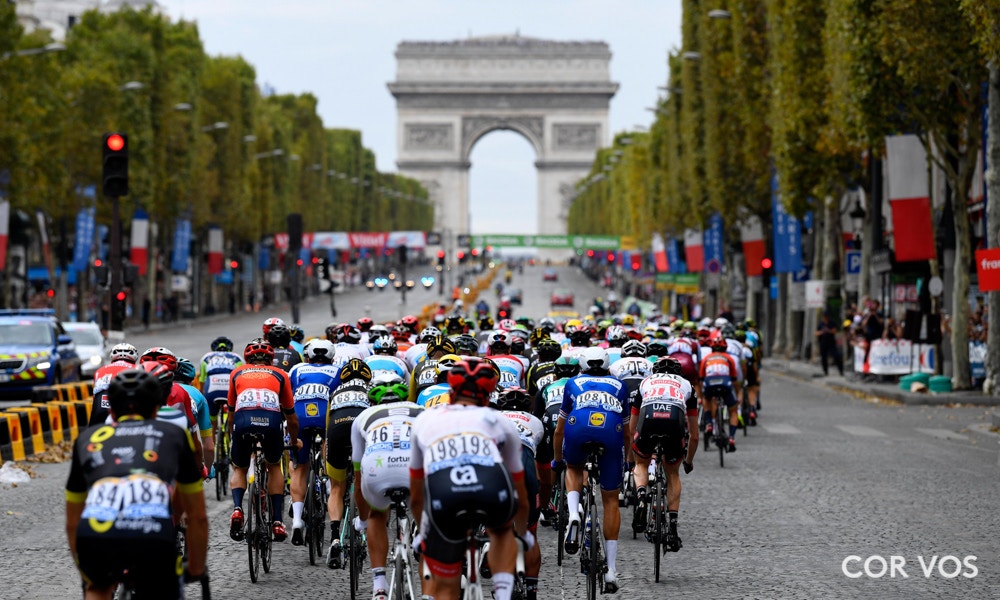 After a series of frustrating near-misses, Alexander Kristoff snatched victory on the final stage of the Tour de France, winning the bunch gallop on the Champs Elysées in Paris. The Norwegian took two stages back in 2014 but had to wait until the last stage of this year’s event to taste champagne again. He was close to the front when Belgian champion Yves Lampaert (QuickStep Floors) was caught on the finishing straight, then came off the wheel of John Degenkolb (Trek-Segafredo) to nab the win.

Degenkolb was chased all the way to the line by Arnaud Démare (Groupama-FDJ), but hung on for second.

“It is a dream coming true,” said Kristoff. “I dreamed about this victory for several years. I was close [in Paris] many times before, but I didn’t manage to beat the fastest sprinters like Greipel, Kittel and Cavendish. I am happy. 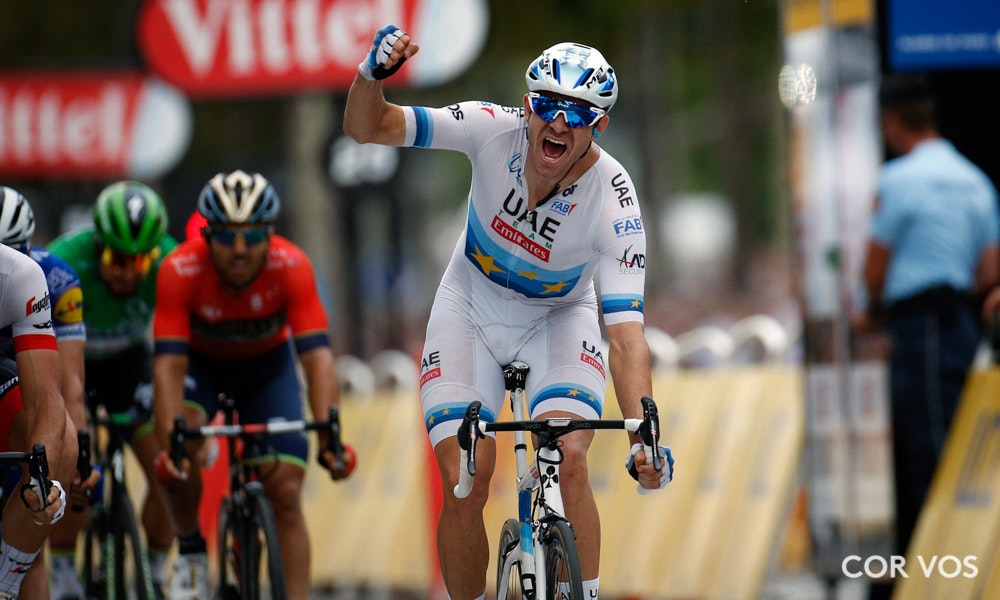 “I was a bit far back after the tunnel, but I was with [teammate Roberto Ferarri]. Then Trek did a very good leadout from behind and I managed to get John [Degenkolb]’s wheel. I was in a really good spot and managed to pass John. In the last 20 metres I knew I was going to win and I manged to do it.”

Degenkolb won stage nine of the race and was determined to try to take another. However things didn’t quite work out. “My team worked full-gas for me and they planned the sprint so well,” he said. “It was just perfect how we came into the last corner and I could start the sprint from Jasper [Stuyven]’s wheel. He did an amazing leadout.

“I am so happy that he did what he did and I will 100% pay him this back because this is something really special, to have a leadout from him on a day like this because he’s also a guy that could make a good result here today.

“Alex [Kristoff] was just a little bit faster, and you have to accept this. I did not do any mistakes, so I have nothing to regret. He’s a great champion.”

Edvald Boasson Hagen (Team Dimension Data), Christophe Laporte (Cofidis) and Max Richeze (QuickStep Floors) were best of the rest, while Peter Sagan (Bora-hansgrohe) was out of position when the sprint unfolded and had to accept eighth. 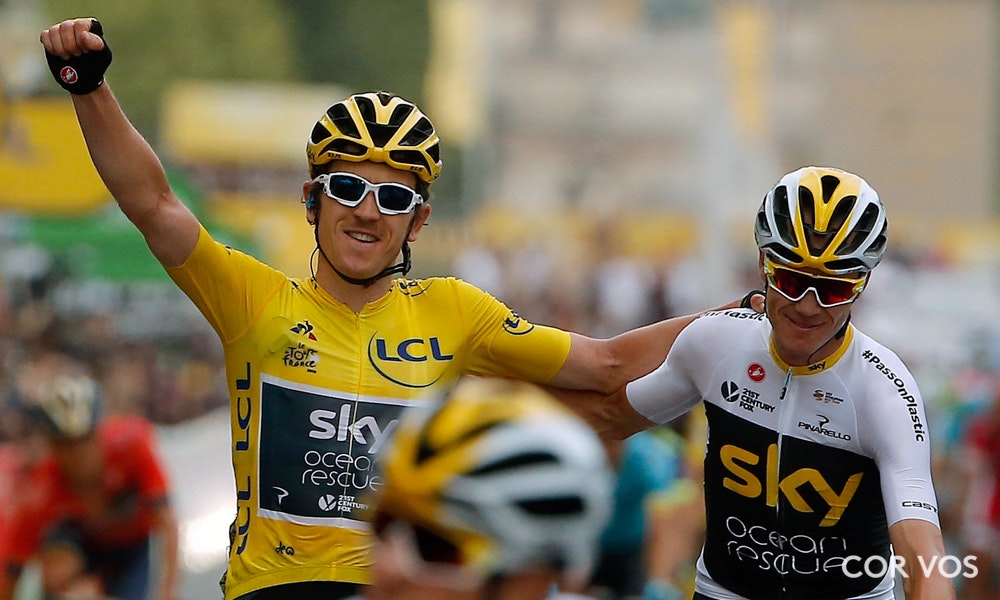 Further back, race leader Geraint Thomas (Team Sky) rolled across the finish line, grinning broadly as he sealed his overall victory. The defending champion and four time Tour winner Chris Froome was alongside him and congratulated his teammate. Tom Dumoulin (Team Sunweb), the rider between them in the general classification, also finished in the same time and secured the runner-up slot.

“It is unbelievable…I think it is going to take a while to sink in,” said Thomas. “Normally that stage is really hard, but I just seemed to float around. I had goosebumps there. It is surreal, it is the Tour de France. To be riding around wearing this [the yellow jersey] is the stuff of dreams.”

He said that his team played a fundamental role in his success. “That is main thing for the whole three weeks,” he said. “We stuck together through some tough times and we got through it. I owe a lot to them.”

Thomas has come a long way since his first participation in 2007 when he was just 21 years of age. He was the youngest rider in the race and finished second-last. “I never suffered so much,” he said. “Every day was a battle. I remember seeing the Eiffel Tower and riding onto the Champs Elysées. It was a buzz being on the other side of the camera lens.” 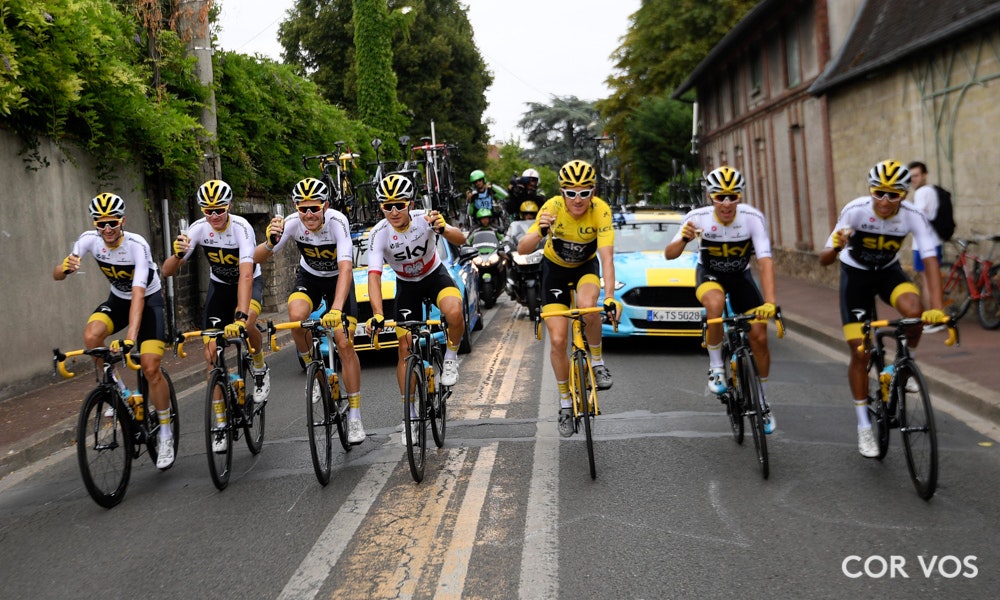 The final stage was marked by the usual celebrations for Thomas and the other jersey wearers, then a six-man breakaway group formed featuring Silvan Dillier (Ag2R-La Mondiale), Taylor Phinney (EF Education First-Drapac), Michael Schär (BMC Racing Team), Damien Gaudin (Direct Energie), Nils Politt (Katusha-Alpecin) and Guillaume van Keirsbulck (Wanty-Groupe Gobert). These went clear heading towards seven laps to go, got half a minute ahead but were gradually hauled back.

Politt had the most left as the bunch closed and leaped clear just before the final lap, but was caught. Other attacks followed, including the last-gasp move by Lampaert, but there was to be no denying the sprinters.

The final stage of the Tour de France is always a largely ceremonial one, with the 1989 time trial to Paris representing the last time the yellow jersey changed on the final stage. It’s generally one for the sprinters, with the celebrations and high jinks early on giving way to flat-out racing on the Champs Elysees as the stage win is disputed.

Indeed the race is regarded as the unofficial world championships for the sprinters, and almost always comes down to a bunch gallop. In the 44 years the race has finished on the Champs Elysées, it has been a group finish on 37 occasions. That statistic doesn’t deter the breakaway specialists, though, who give it a shot each year and greatly enliven the racing for the Parisian crowds.

The stage began in Houilles and covered 116 kilometres en route to Paris. It was completely flat, lacking any categorised climbs, and concluded with eight laps on the circuit in Paris. 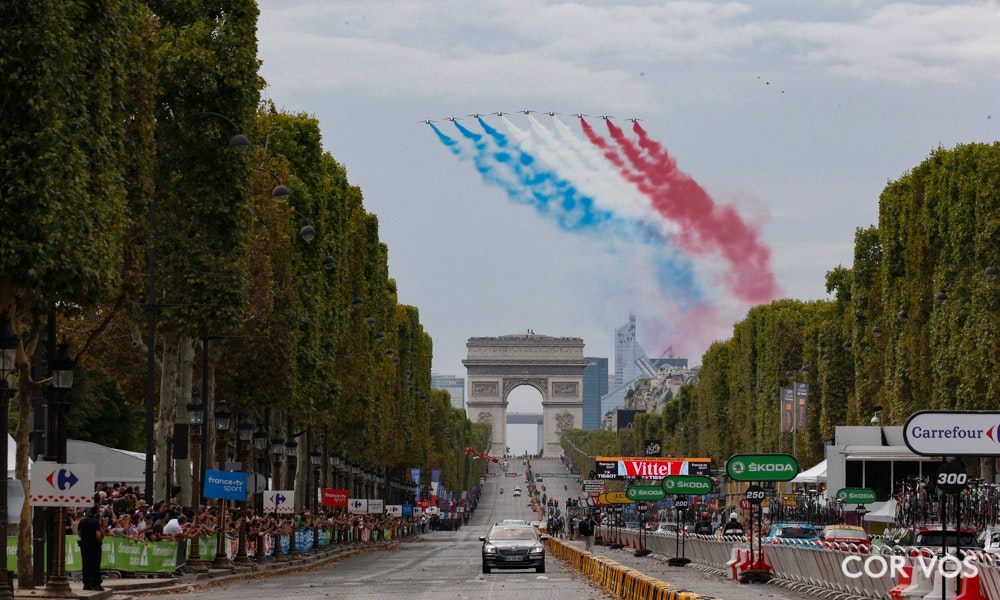 Also prominent before the riders began was the most combative rider Dan Martin (UAE Team Emirates), as well as the rider in second overall, Tom Dumoulin (Team Sunweb).

After some relaxed riding and time for Thomas to celebrate his win with some champagne, the race headed onto the circuit in Paris.

There Sylvain Chavanel (Direct Energie) attacked, the peloton content to let him have some time out front in what was the final Tour de France stage of his career. The Frenchman is retiring after a long professional career, and has been aggressive throughout the race.

With six laps left the gap increased to half a minute, and this grew to 40 seconds with some 31 kilometres on the clock. Peter Sagan’s Bora-hansgrohe squad was helping Groupama-FDJ at this point. Phinney had a mechanical issue and had to change his bike, but was able to return to the break with 20 kilometres left. He had bounced back remarkably well from a big crash and resulting fractures to his nose and eye socket.

SETTING THINGS UP FOR A SPRINT

The Cofidis team was determined to try to improve on the runner-up slot Christophe Laporte got in the bunch gallop on stage 18, and started chasing hard at the front of the peloton. With 15 kilometres left the gap was 20 seconds, and sprinters such as Sagan were inching closer to the front.

The same time gap persisted as they rode across the finish line to start the final two laps, 13.4 kilometres from the end. The break knew that the advantage was almost certainly enough to win the stage but, with cheering crowds and no more stages to worry about, they were content to empty the tank, dig deep and see what happened.

Cofidis and Groupama-FDJ were continuing to ride hard at the front. With 12 kilometres left Kevin Ledanois (Fortuneo-Samsic) attacked and was joined by Julian Alaphilippe (QuickStep Floors). The latter has been one of the most aggressive riders in the race and was set to win the best climber competition, but also fancied doing something on the flat. However the bunch quickly got up to them, leaving just the break ten seconds in front with ten kilometres left.

Politt had appeared to be one of the strongest riders in the break and he launched a solo move just before the eight kilometres to go banner. The others continued on but were caught just after the start of the last lap, while Politt remained out front.

Trek-Segafredo and Bora-hansgrohe were hammering it on the front and caught Politt on the descent after the Arc du Triomphe. The sprinters were fighting for positions heading into the final three kilometres, but with 2.5 kilometres to go Marco Marcato (UAE Team Emirates) jumped clear. He was overhauled by Daniel Oss (Bora-hansgrohe) and Yves Lampaert (QuickStep Floors), who then dropped Oss heading inside the final kilometre.

The Belgian champion raced through the Place du Concorde and led onto the finishing straight, but was overhauled by John Degenkolb (Trek-Segafredo). Alexander Kristoff was on his wheel, though, and the UAE Team Emirates rider passed on his left and grabbed the stage. Démare tried to get past Degenkolb but had to accept third.

Further back, Thomas wheeled across the finish line alongside Froome, who congratulated his friend and teammate. After three weeks, 21 stages and 3,351 kilometres, the Welshman had won the race.