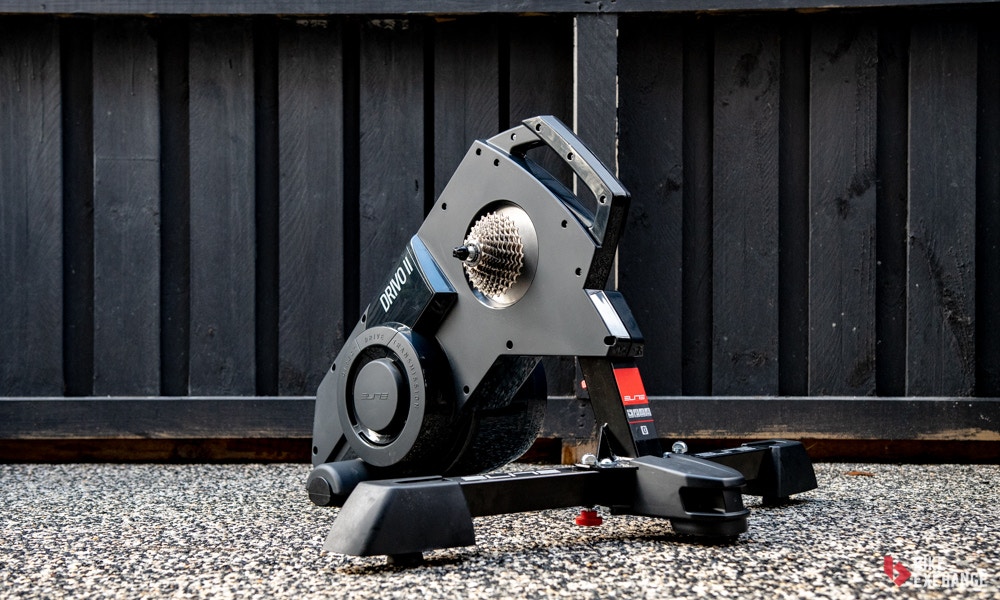 More Than Just a Training Device 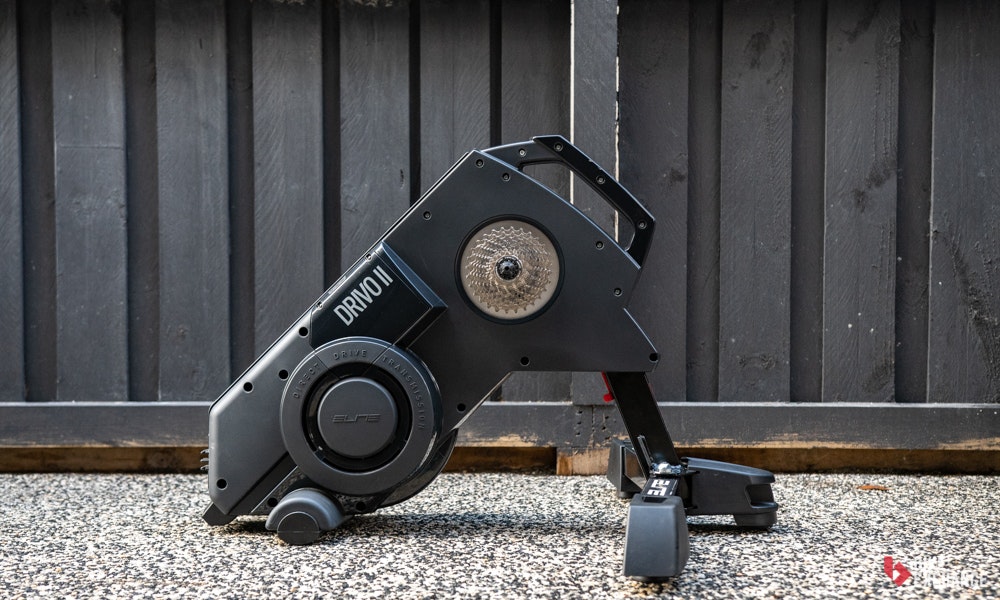 Whilst smart trainers have been on the market for the last ten years or so, the explosion in popularity of online social platforms such as Zwift, The Sufferfest and TrainerRoad have transformed indoors trainers from a rudimentary training device, into a social platform for cyclists of all abilities to train, chat, and generally enjoy riding in the virtual world.

So what is a smart trainer? Simply put, a smart trainer functions the same as a standard, wind, fluid, or magnetic resistance trainer, however, has the ability to mimic road surfaces, simulate slopes and generally have a more realistic road feel than a traditional, analogue trainer. 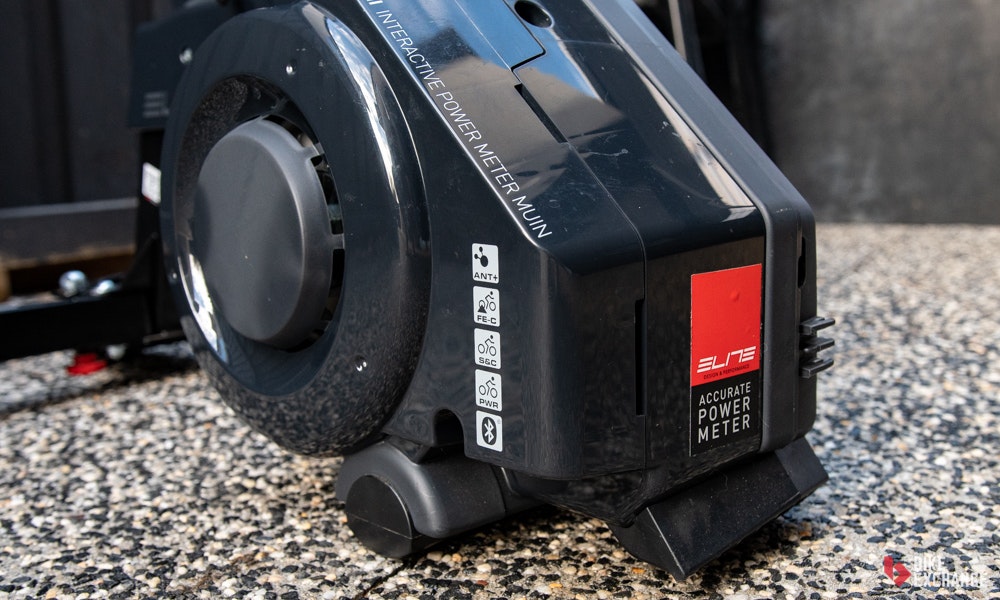 Sitting as the flagship smart trainer in Elite’s product line-up, it should come as no surprise to learn that the Drivo II is jam-packed with impressive connective features. The unit houses an internal powermeter with an industry-leading claimed accuracy of +/- 0.5%, the ability to simulate slopes up to 24%, and is able to handle a maximum power output of 2400 watts.

One of the main improvements made in the connectivity stakes from the original Drivo to the Drivo II is the speed at which the unit is capable of changing simulated slope. The new unit is claimed to have the ability to shift from a 0% gradient, right up to 24% in the space of three seconds, much faster than any real-world hill. What this means for the user is a more realistic ride feel, with the unit able to more accurately represent small peaks and troughs in a simulated road surface, as well as that ability to adequately handle power spikes seen during sprints or hard efforts.

There’s An App for That 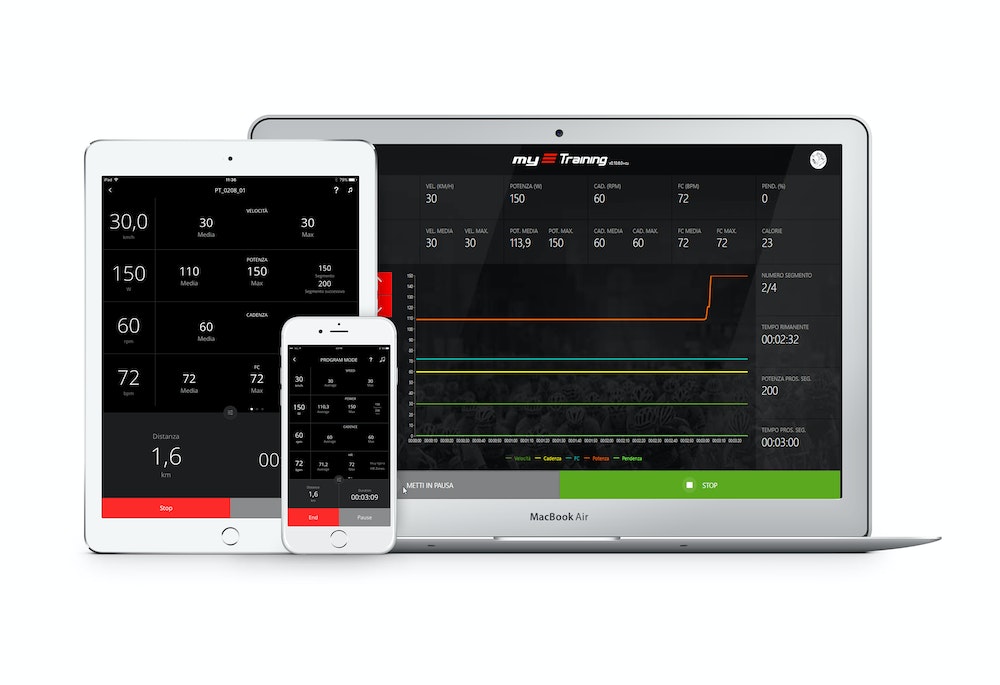 Much like most connected devices on the market, the Elite Drivo II has its own standalone companion app, My E Training. The app itself is compatible with a host of Elite devices, is available for Windows, Mac, iOS and Android, and provides users with a range of virtual coaching services. These include; custom and pre-set training programs, virtual rides on some of the world’s most desirable roads as well as calibration and spin down sections to ensure your trainer is reading at its optimum.

Cost wise, an annual subscription to the My E Training app typically sets back users €19.95, or approximately AU$30, however, the purchase of a Drivo II provides free access to the service for 36 months.

I found the app to function just as well as any other training or coaching app available on the market, however, the lack of a social network like Zwift, TrainerRoad or The Sufferfest may cause some riders to look elsewhere. 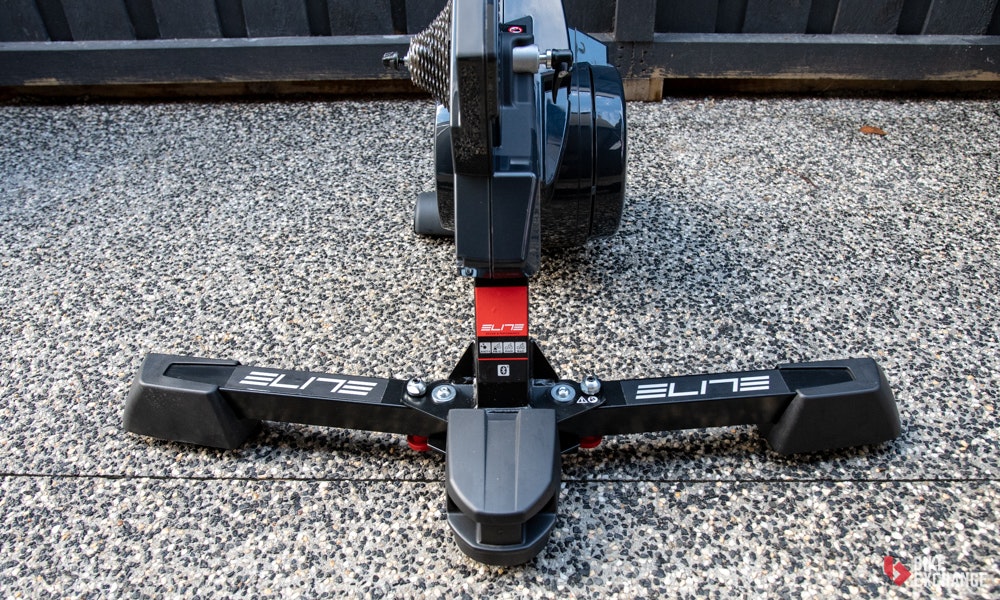 I’ve been lucky enough to have the Drivo II for a little over two months now, in that time, the unit has seen over 1,500 virtual kilometres across a range of different fitness apps.

At 17.4kg, the Drivo II ships in a box that can only be described as enormous. Whilst is bothersome for transportation and shipping, the advantage is that the trainer is mostly assembled. All that is required is attaching the foldable legs and nose piece, installing a cassette of your choosing (be sure to budget for this) and then plugging it into a power source. From there, you’re ready to ride. Elite does a good job of ensuring the consumer has all the information and fittings they require out of the box. 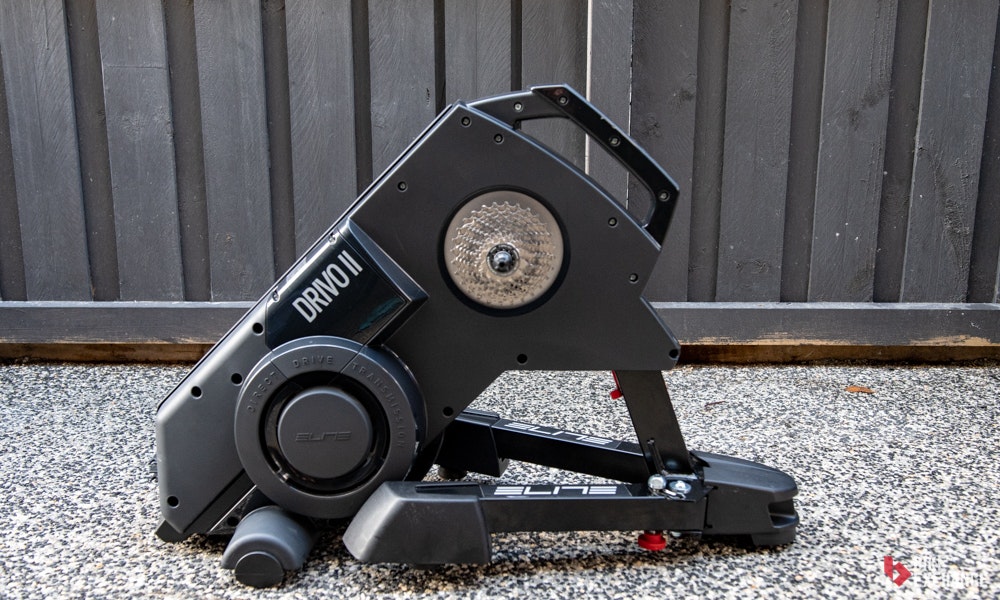 The legs themselves are the same design as seen on the Italian company’s second-tier interactive trainer, the Direto. Providing the unit with a wide and stable base, the legs feature rubber stops that can be wound up and down to account for any inconsistencies in your flooring surface and are easily folded in, making the unit more compact and easy to store. Even under hard sprint efforts, the Drivo II showed no signs of strain, this is one trainer you don’t need to be scared of riding.

Two notable omissions from the build kit inside the box, however, are an ANT+ dongle, and a cassette. These two items can be purchased for a negligible cost (AU$60 for the dongle, and AU$65 for a cassette (and you may need a cassette tool, too). For the premium price of the unit (AU$TBC, US$1,299), I would’ve liked Elite to take a leaf out of Wahoo’s playbook and supply these with the unit. 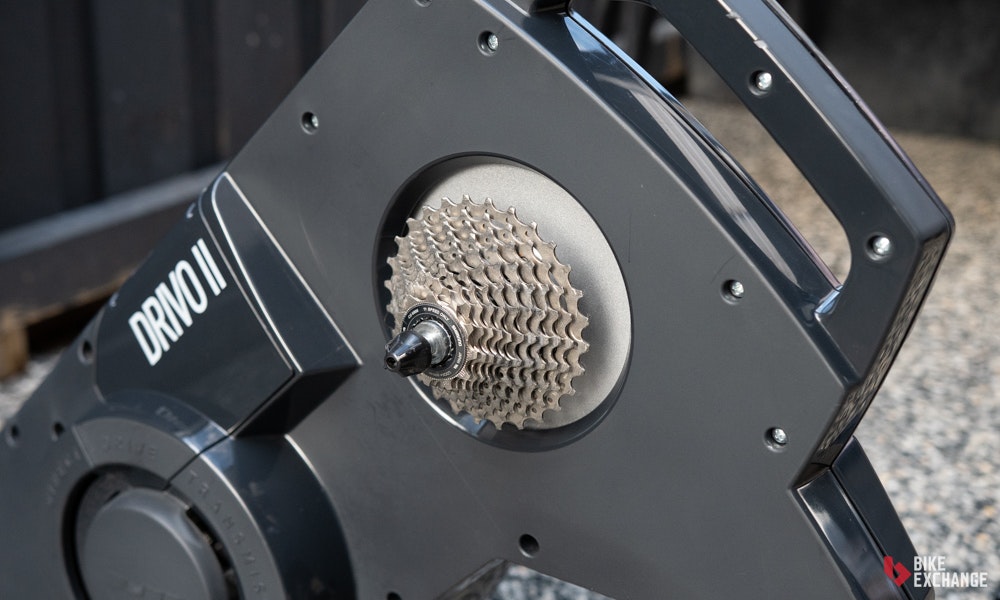 Boasting a power accuracy of +/- 0.5%, the Drivo II is touted as the most accurate interactive smart trainer on the market. This is all thanks to a revised Optical Torque Sensor (OTS) which reads the amount of torque being applied. Unlike a traditional powermeter that will typically use a strain gauge to read wattage, the advantage of using an OTS is that it’s more resistant to fluctuations in temperature-based readings, thus making it more accurate. This translates to more accurate data, and therefore, better quality training.

It’s hard to notice a difference between riding indoors and outdoors on the Drivo II. This is thanks to the new electromagnetic resistance unit and 6kg flywheel inside the unit. The main advantage of pedaling realism is how easy it makes translating your fitness gains made indoors, back onto the road.

As previously mentioned, the Drivo II can be used in two different modes. The first is Simulation mode, which simulates a specific outdoor grade, requiring the rider to change gears, output and cadence just as you would outdoors. And the second option is ERG mode, where the unit is set to a specific power level, such as 200W, and will stay there regardless of the gearing used.

The Drivo II’s compatibility standards mean the unit works with the majority of the industry-leading third-party training apps on the market including Zwift, TrainerRoad and The Sufferfest. During the review period, save for a couple of sessions testing out the My E Training app, and calibrating the unit, I used the Drivo almost exclusively on Zwift and The Sufferfest. 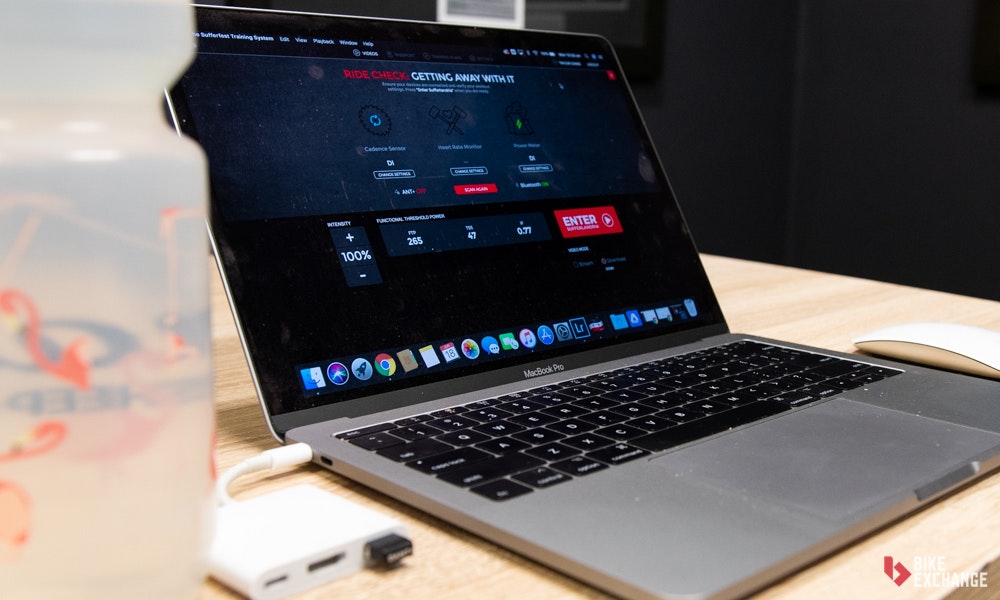 The unit performed flawlessly when paired in ANT+ mode in both apps, however, I did have some minor issues with pedalling resistance and power readings when using the unit in Bluetooth Smart mode. Running Zwift on iOS with Bluetooth Smart caused the unit to incorrectly replicate the virtual road surface, leading to the uncanny experience of spinning up 16% sections of Alpe du Zwift, in the biggest gear. It is worth noting, that this appears to be an issue with Zwift and it’s Bluetooth protocols rather than an issue with the Drivo II. I was unable to replicate the fault with any other ride simulation app during the testing period, however, Elite were notified of the problem and are continuing to work on replicating the fault and providing a fix for the issue. 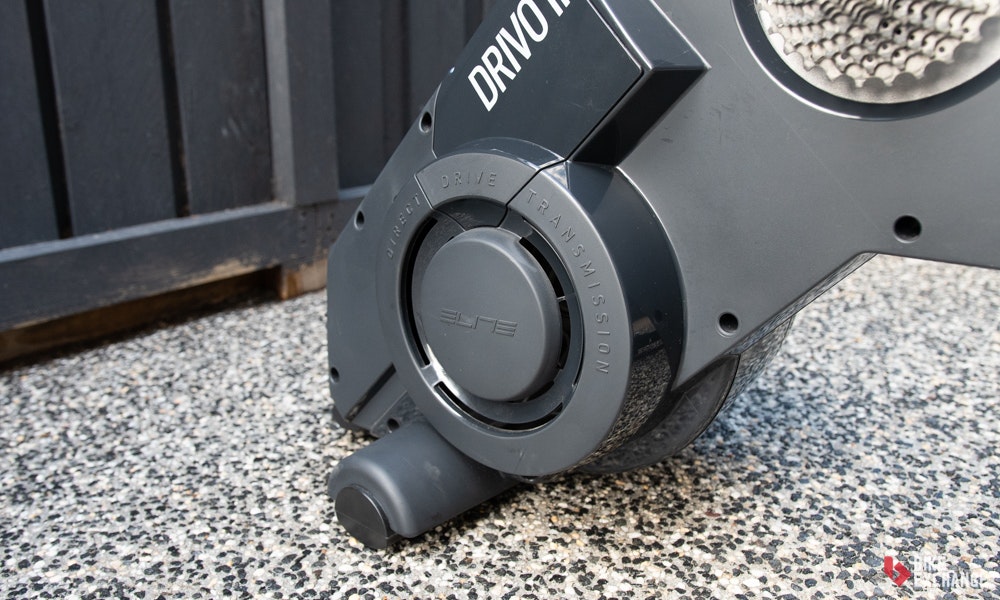 There’s no denying that with the Drivo II, Elite has taken what was already an extremely competitive unit (with the Drivo), and evolved it into one of the leading smart trainers available on the market today. Whilst the unit itself isn’t perfect, it does so much right that I have no hesitation in recommending it for any dedicated cyclist. The unit itself is expected to hit local shores in October, with pricing to be confirmed at a later date.

Cassons, the Australian distributor of Elite, provided the product for this review.

Looking to dive into the world of online training and don’t know where to begin? Our Ultimate Guide to Indoor Trainers has all the information you need to make an informed decision.