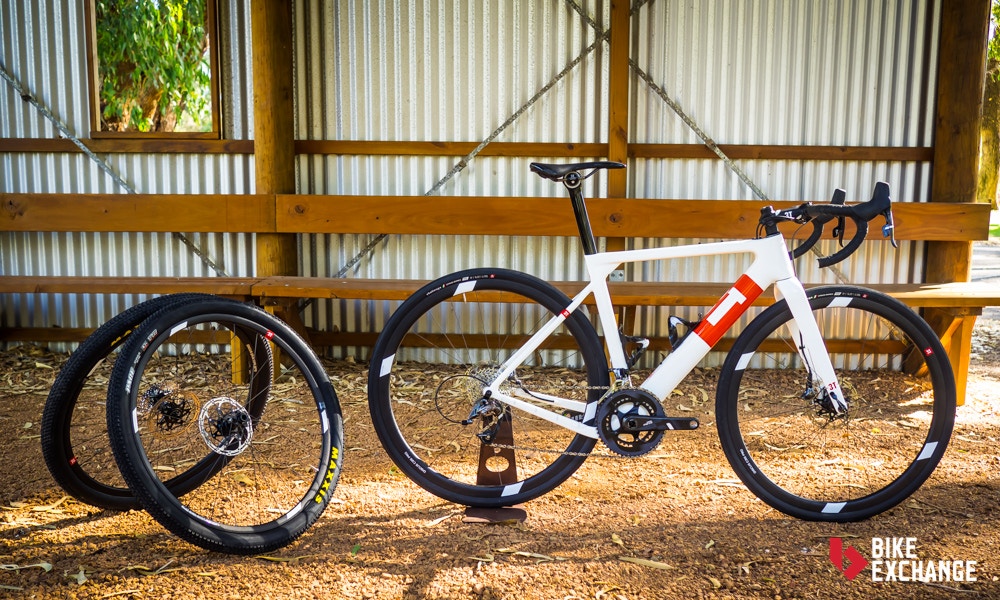 3T have long been known for quality bike components and the Exploro is the brand's first foray into the frame manufacturing market. While bike frames are new to 3T, they aren't to the company's co-owner and Head of Design, Gerard Vroomen, who co-founded Cervelo. Entering the bike market with a bang, 3T has created the first aero, gravel bike that is truly one of a kind.

CyclingTips’ Australian tech editor Matt Wikstrom will be reviewing the 3T Exploro Team Edition, and to make things interesting, he'll be testing the bike with both a road 700c wheelset with 33c tyres and a mountain bike 650B (27.5in) wheelset with 2.1inch tyres. We were able to get our hands on the bike for a brief moment to take some shots and get an idea of what this bike is all about before Matt’s full review is released on CyclingTips. For its first bike, 3T have created a do-everything bike with the frame geometry of a road bike, and enough clearance for mountain bike tyres. The unique geometry means the reach and stack are comparable to a road bike, but the additional tyre clearance enables riders to alter their wheel and tyre choice to suit the terrain, whether it be the road or the trails.

700c wheels can accommodate tyres from 28mm right up to 40mm, and 650B wheels up to 2.1in, and because the diameter is similar, the handling of the bike is not going to be overly affected by the change. The increased tyre clearance is due in part to the dropped and bowed chainstays. In place of traditional straight ones, the warped stays also allow for narrow road cranks and the effective length to be kept short (415mm), which, should result in snappy rear end control and road bike type acceleration. As CyclingTips' Matt Wikstrom says, "The two wheel sizes mesh perfectly so that all I notice is the extra grip of the knobbies when I'm off-road versus the smooth speed of the slicks on the road." You may not immediately think aerodynamics are important to an off-road bike, but as 3T rightly point out, whether off-road or on tarmac, if you are going slow because of head or crosswinds, anything you can do to combat that is going to be advantageous. And so 3T set out to make the aerodynamics of the Exploro as favourable as possible, creating 'Sqaero'. A mash of 'square' and 'aero', the design is not dissimilar to other Kammtail shapes on the market, whereby the tail of the tube is squared off, keeping the aerodynamic properties of the tail, with improved stiffness and a reduction of weight.

Improved aerodynamics are also achieved with a massively wide down tube measuring 50mm that is wide enough to catch the airflow coming off the big front tyre and shield water bottles from the wind. The wide downtube is complimented by the skinny 25mm seat tube, that 3T say, 'aerodynamically disappears in-between the bottles and the rear tyre'. "I like the aggressive lines of the frameset. Ignore the wheels, and it looks like a race bike. Fit the 27.5 wheelset and ignore the bars, and it looks like an MTB,' tells Matt upon first sighting the bike. Coined 'Realfast', 3T has an approach to aerodynamic testing that we really like. Standard wind tunnel testing is typically measured at between 40 - 50kph at various yaw angles, yielding great results but not applicable in the real world for the majority of us. 3T took a different approach, testing the Exploro at a much more realistic 32kph and even caked in mud! Their testing concluded that a 'muddy Exploro with 40mm knobby gravel tyres and 2 water bottles is faster than the equivalent clean round tube bike is with 28mm slick road tyres and without bottles'.

Future proofing the bike is the modern application of internal cabling with cable guides for mechanical and electronic, as well as options for either single or double front chainrings.

Another nice feature, especially for anyone who has tried to change a rear disc wheel, is the 'hang loose hanger'. The derailleur hanger simply flops freely during a wheel change, providing greater access and quicker wheel re-installation as a result of not having to fumble around trying to line up the disk rotor on the left while juggling the derailleur, cassette, and chain on the right and holding your bike upright. 3T simply claim that all you need to worry about is lining up the disc rotor with the brake caliper, and once that's done, you can focus on the rest.

The Exploro offers multiple options for positioning of the water bottles, to either optimise aerodynamics or carry more fluid. There are attachment anchors on the top tube for storing food for those all-day epics too. The Exploro Team Edition is available in Australia now and has a recommended retail price of AUD$4,499 which includes the frame, fork, headset and seatpost. Matt has built the test bike with SRAM Force Hydro 22 group and 3T parts, including the new Pro Discus C35 and Pro Discus Plus C25 wheelsets, which, 3T recommend for the Exploro. Weight for the build with 2 bottle cages but no pedals is 8.41kg with the 700c wheelset (33c Challenge Strada Bianca tyres) and 9.04kg with the 27.5 wheelset (2.1inch Maxxis Pace tyres). Read Matt's full review 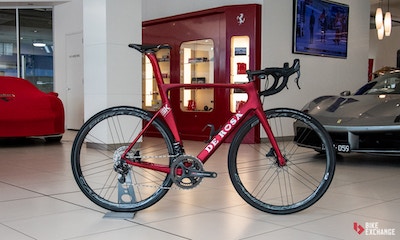