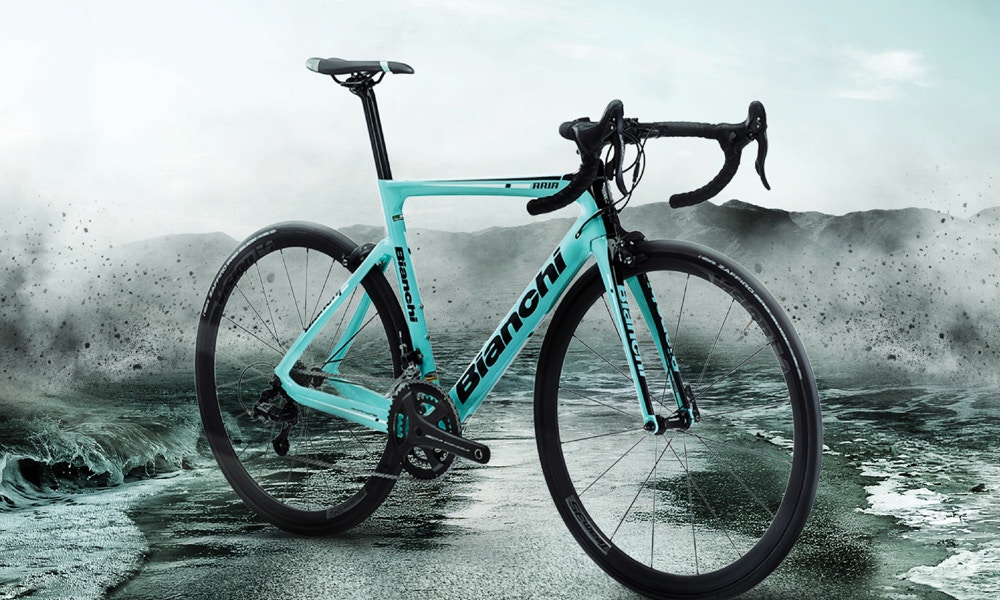 Bianchi is a bicycle brand synonymous with the nostalgia of the Italian racing scene. The 130-year-old company operates today from its headquarters in Italy, where it continues to remain relevant to the world of bike racing and amateur cyclists alike.

In addition to entirely new models, 2018 sees lighter weights, geometry improvements and a focus on optimising aerodynamics for its returning models. The previous top-tier Oltre XR2 has been retired to make way for the newly evolved Oltre XR4, aimed at high-end racers who don't want a single beat missed when it comes to the latest available technology.

There also exists an option for the more budget conscious – the Oltre XR3 – which shares many of the characteristics of its superior.

Also hitting Australian shores this year is a special edition Specialissima, a frame for the weight-weenies complete with a retro paint job to honour Marco Pantani. Finally, Bianchi fill a gap in the affordable aero-bike range with a new model, the Aria.

The Oltre series and Specialissima (along with the Infinito CV and Aquila CV) feature Bianchi's patented vibration dampening technology, Countervail. Developed in partnership with NASA, Countervail is a viscoelastic carbon material with a unique fibre architecture that Bianchi claims cancels up to 80% of vibrations while providing an increase to both stiffness and strength.

Integrated into the entire structure of the carbon frame and fork, the idea is that Countervail is able to provide a buffer for roughness from the roads, all the while remaining lightweight and stiff enough for reactive handling.

Bianchi says that Countervail helps reduce wasted energy by the rider, decreasing fatigue and providing comfort when riding on poor road surfaces over long distances. According to Bianchi, Countervail is superior to traditional dampening methods such as superficial rubber inserts and isolators that are retrospectively fitted to the frames. 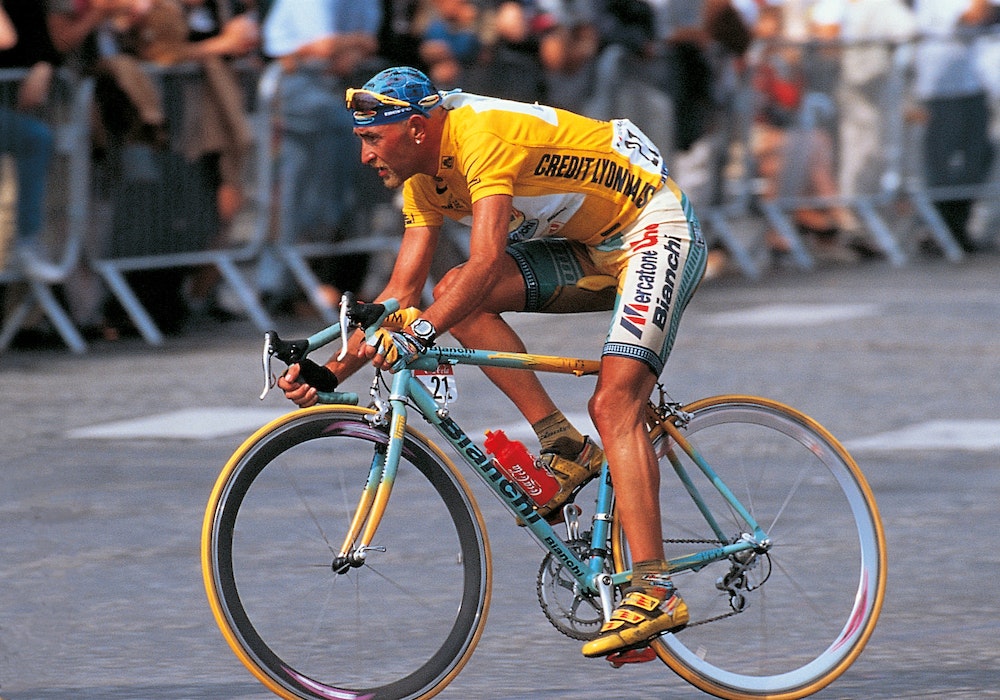 In 1998 at the height of Grand Tour hype, Marco Pantani won both the Giro de Italia and the Tour de France. A feat matched by only a select few. The iconic and eccentric cyclist rode to victory aboard a Bianchi Mega Pro XL, an incredibly lightweight, double-butted aluminium frame which was tailored specifically to match his physiology and riding style.

The featherweight cyclist’s signature aggressive attack up gruelling climbs, in the drops no less, was considered when creating the machine he would pilot to the podium.

Fast forward 20 years and Bianchi have chosen to revisit his legacy with a special anniversary edition version of its ‘climbers bike’ the Specialissima, released to commemorate the Italian. 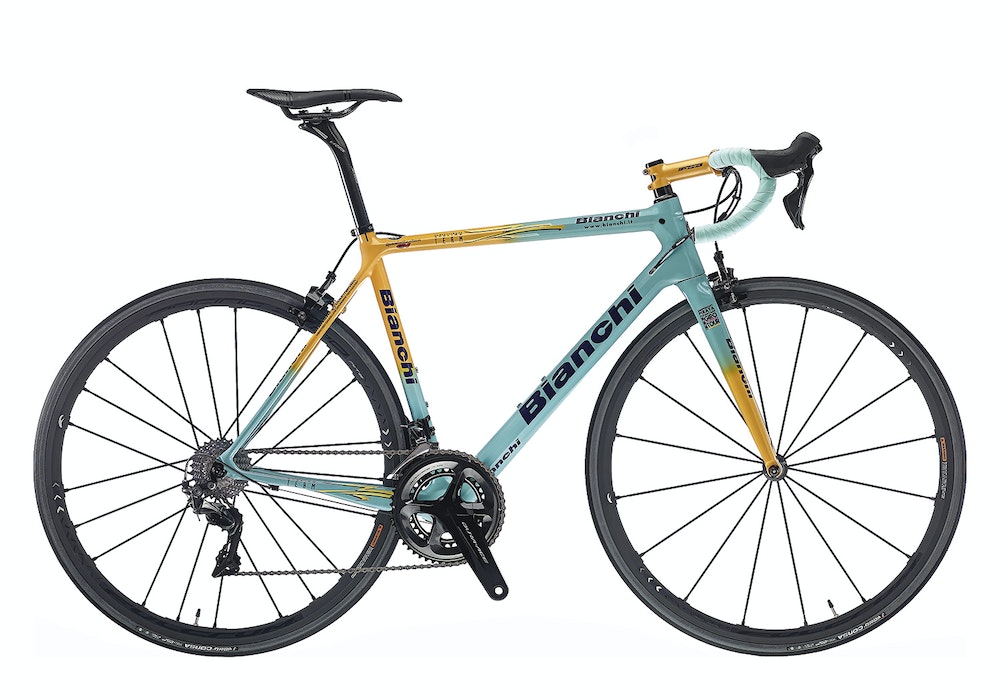 Conceptualised as a bike to complement the climber, the aim of the Specialissima frameset is to hit the perfect balance between light-weight and rigidity for acceleration when the road points up. A 55cm frame is claimed to weigh a svelte 780g, paired with a 340g fork - with Countervail technology embedded throughout the high-modulus carbon.

The aggressive geometry places riders in a long and low position, which according to Bianchi, has been shown to optimise power transfer and improve handling responsiveness.

Also considered is what goes up must come down. To suit this, Bianchi has accounted for stability and traction on the descents with a straight-bladed fork and a tapered headtube. 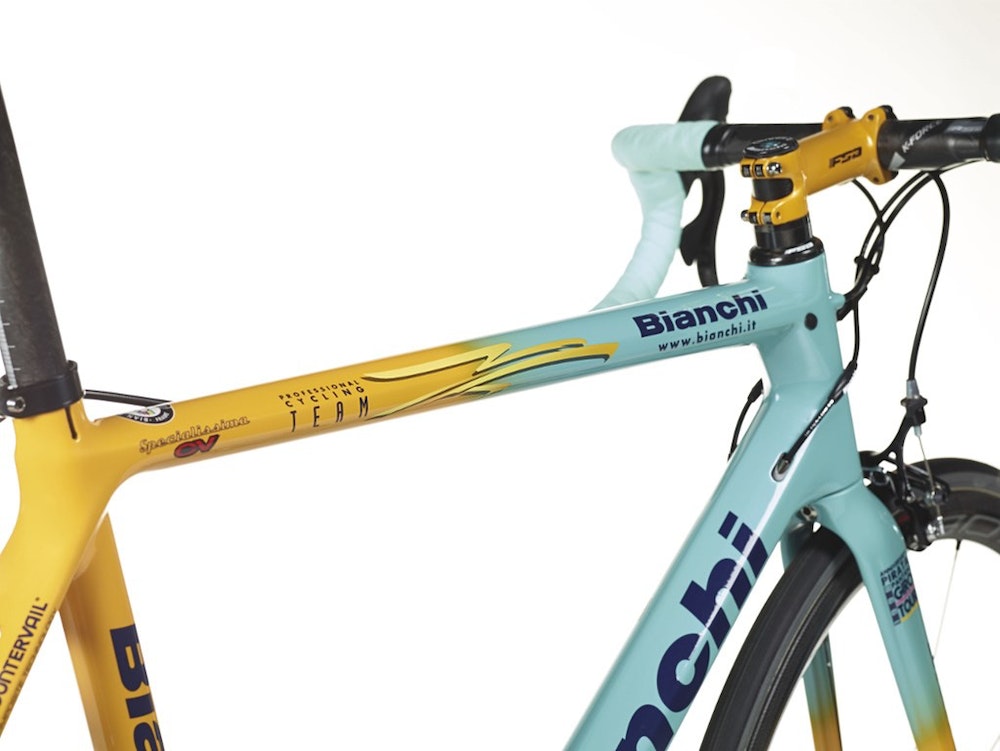 Although offered as a complete build in Italy, Australian shores will receive the limited edition model as a frameset only. Thankfully, the hand-painted frame is compatible with both electronic and mechanical groupsets, allowing for prospective owners to pursue a fittingly Italian Campagnolo build, or adorn the frame with a Shimano or SRAM groupset if they wish.

This special edition frameset is available in seven sizes from 47 to 61cm. The Pantani edition frame alone will cost you AU$7,999, so it is safe to say it favours those with a deep appreciation for cycling history.

For Performance Purists - The Oltre Series 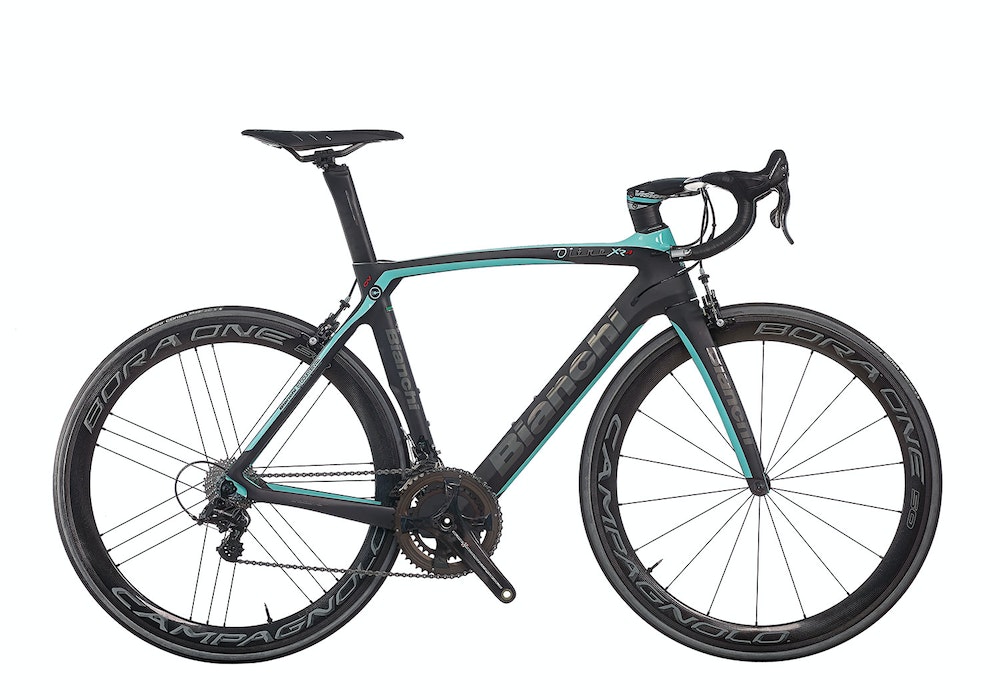 Fresh for 2018 with what Bianchi claims is its most aerodynamic road frame to date, the Oltre XR4 enters with new performance upgrades not seen on the outgoing Oltre XR2 - notably a more aero-profiled tubing and tweaks to the geometry. A tapered headtube that integrates into the bladed fork is said to reduce drag, and features a direct mount brake to keep it tidy. Also new is a more aero seattube with an integrated clamp, out of the way of the wind.

Other updates include the addition of a wider, stiffer BB86, a lowering and widening of the seat stays and straighter, wider chainstays. This should provide a more nimble ride and improved acceleration and power transfer. The redesigned rear end also accommodates internal cable routing for both mechanical and electronic groupsets.

In order to optimise a rider's aggressive, low and forward position in race conditions, the front end geometry has a short stack and long reach, with a 5mm reduction in headtube length.

The outcome, Bianchi claims, is that these improvements to the XR4 result in it requiring 20 watts less power (at 50km/ph) from the rider to hold that speed versus the old XR2.

Whilst on paper it reads as an out and out race bike, Bianchi insists it’s still comfortable enough to spend all day on. This is largely thanks to the Countervail tech embedded in the carbon.

The XR4 will be predominantly available as a frameset only, with options for a custom paint job thanks to Bianchi's 'Tavalozza' program. Tavalozza is Italian for 'palette' and offers 15 different frame and fork colour options, 15 different insert colours, 6 different logo colour options and the choice of a matte or gloss finish. 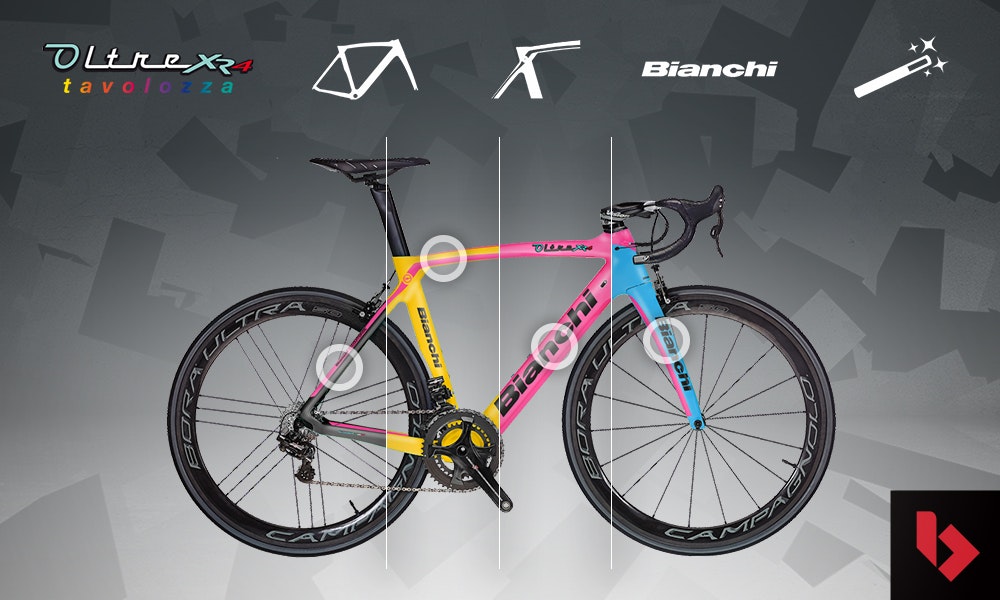 There also exists the option to order a Lotto-Jumbo Team Bike replica frame These will be a limited release with final price TBA. 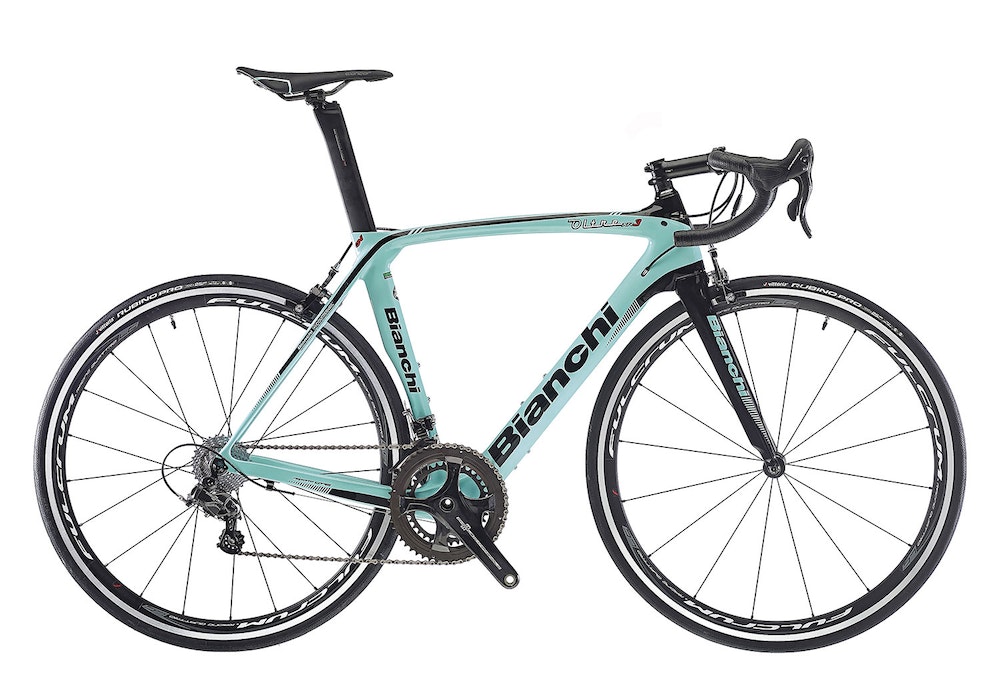 Mimicking the geometry and design of the XR4, the Oltre XR3 is a more conservatively priced version of the aero race bike, the only penalties being slightly heavier frame and fork combo due to a mid-modulus carbon lay-up. However, this means the Oltre XR3 retains the Countervail benefits, and as such Bianchi claim the ride is just as smooth as its top-tier counterpart.

New for this year is a wider blade fork for aerodynamic advantages, as well as a similar tapered head-tube profile to that featured on the XR4.

Of course, as with much of Bianchi’s performance range, a Campagnolo build is on offer. The Oltre XR3 Chorus features the Campagnolo 11spd groupset of the same. Completing the package is a Fulcrum Racing Quattro wheelset wrapped in 25c Vittoria Rubino Pro rubber. 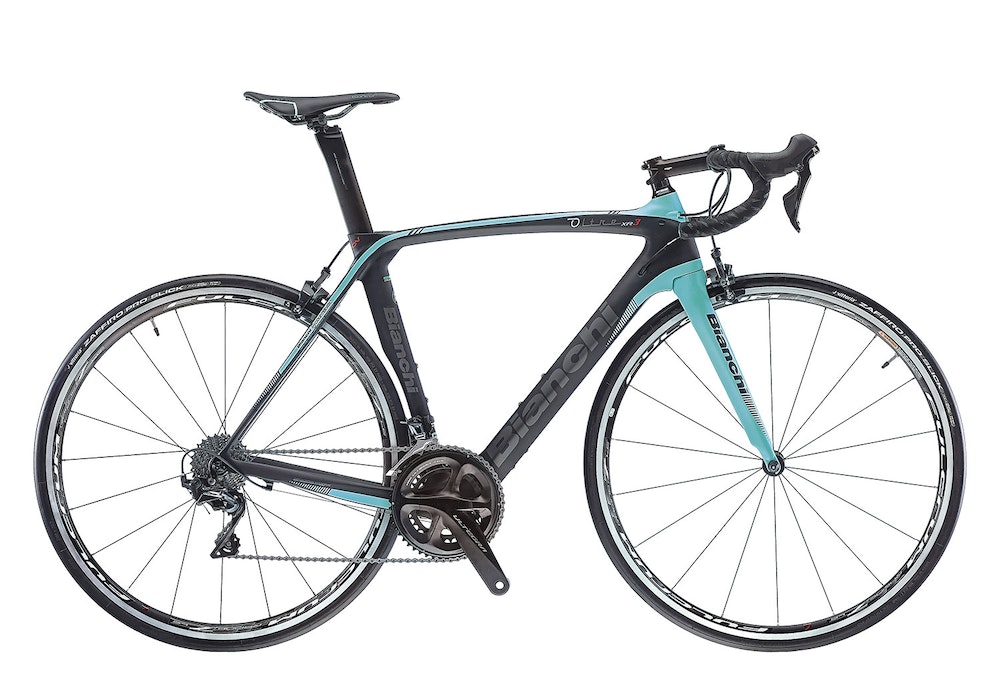 Complete with a mechanical, mid-compact Ultegra R8000 groupset, this bike will still go above and beyond the demands of the serious amateur racer. Australia will only get to see the mechanical version hit its shores, however, the frame is electronic groupset ready.

Colour options for the Oltre XR3 are Bianchi’s trademark celeste paint job with gloss black highlights, or the inverse, a mostly gloss black frame with celeste decals and a graphite label.

A new addition to the Bianchi family and true to current trends – the Aria is an aero road bike with a lower price tag of its aforementioned siblings. The Aria is still aimed at the dedicated club racer or weekend enthusiast with a full carbon frame and fork, but forgoes the unique Countervail technology in favour of reducing cost.

The new kid on the block features aero tubing all round, including the headtube and carbon seatpost with a neatly hidden clamp. Bianchi says the Aria’s fork and dropped seat stays are actually inspired by the Aquila time trial bike. The seatube features a cut-out so the rear wheel can sit snug, reducing the wheelbase for a snappy, responsive acceleration. The fork crown integrates with the downtube and has legs that bow out to reduce air turbulence.

The Geometry echoes that of the Oltre XR4, Bianchi’s top-tier performance frame, so riders can expect an aggressive racing position as favoured by professional riders and flat out fast enthusiasts.

One of the perks of this bike is that it was purposefully designed so that it can be reimagined as a triathlon bike with the addition of some clip on aero bars and perhaps a deeper set of wheels. This idea means essentially eliminating the need for two bikes for amateur triathletes - a road racing and triathlon bike all in one.

In Australia, The Aria is available in two build options: 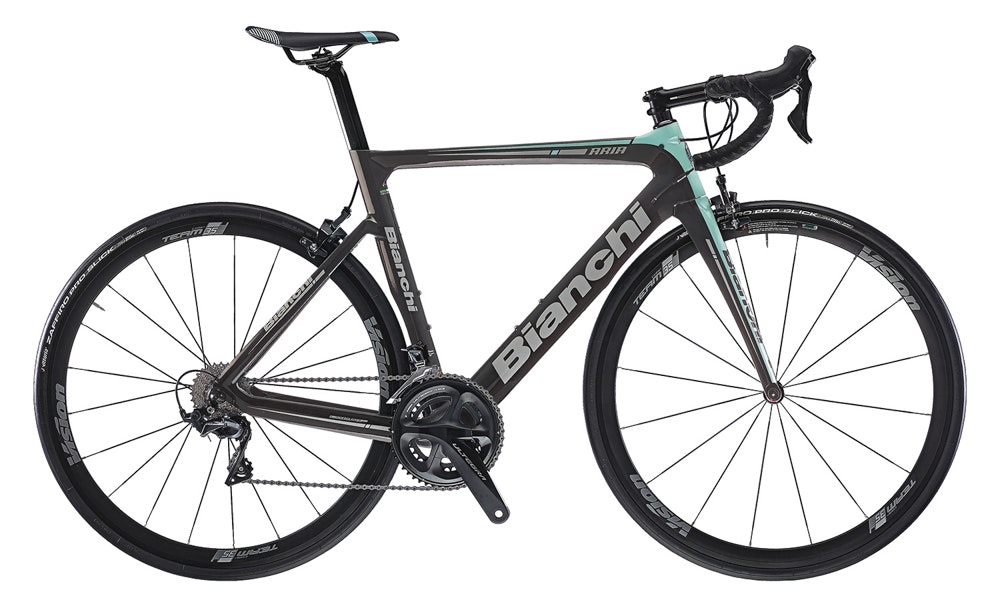 Shifting comes courtesy of Shimano's value performance groupset Ultegra R8000. Somewhat counteractive to the “flat out fast” nature of the bike, the Aria is only available with a 50/34 crankset, however, this does open up the versatility of the bike should the roads ahead include much elevation, or to ease the strain if attmepting an Ironman.

Finished with a proprietary alloy stem and carbon handlebar, and a set of Vision Team 35 Comp wheels, the Aria Ultegra offers affordability with little compromise on weight and performance.

Colours on hand include the signature Bianchi Celeste with sharp black lines, or the inverse, a predominately black gloss frame with Celeste highlights. 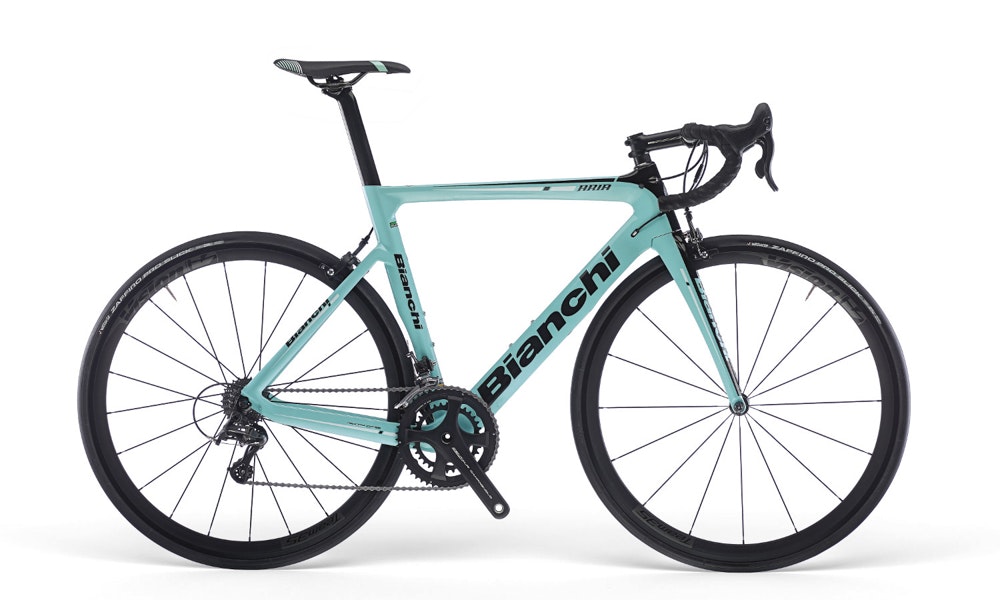 For Italian-gear purists, Bianchi offers the Aria complete with a Campagnolo Centaur build kit. A compact crankset features yet again as do the Vision wheels and Vittoria Zaffro tyres, the same as it’s Japanese shifting counterpart. You can shop the new 2018 Bianchi road bikes and frames right now from leading retailers across the country right here, on BikeExchange