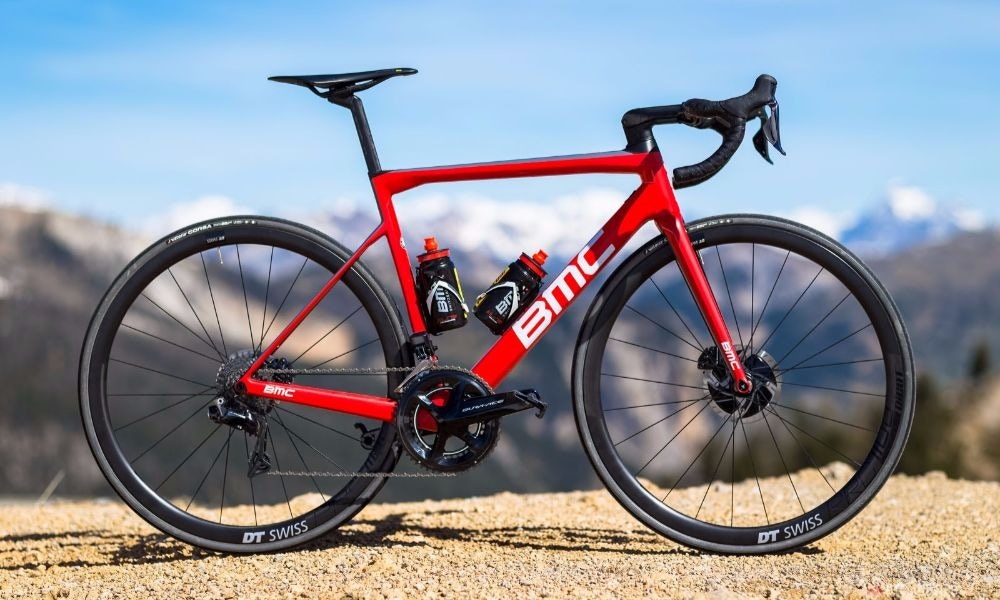 Greg Van Avermaet was seen piloting a new bike at Amstel Gold Race under the cloak of darkness it would seem, riding a stealth black frame that had many excited about a possible new BMC bike on its way. It turns out the Olympic Road Race champion was riding the new BMC Teammachine SLR01 and following the race he expressed a desire to use the bike at Paris-Roubaix. While it may have been missed by many at Amstel, had Van Avermaet had his way in using the new bike, we would have seen the new Teammachine charging across the cobbles of Paris-Roubaix to victory, but alas, both he and us had to wait.

Details of the new 2018 Teammachine have now been released, so to get you up to speed we outline the ten things you need to know about the new premium race bike.

At first glance, the new Teammachine closely resembles BMC's Roadmachine that was launched in the middle of 2016 and pitched as the 'one bike collection'. The Roadmachine featured disc brakes, thorough integration and variable front end stack heights allowing riders to partially customise its geometry. The new Teammachine seemingly borrows plenty of the learnings from creating the Roadmachine, with a similar frame shape, greater integration than previous versions, and the addition of disc brakes.

The Teammachine is onto its third iteration and there's no doubting its winning pedigree. The first generation most notably carried Cadel Evans to victory at the 2011 Tour de France, and not to be outdone, the second generation's palmares includes recent victories at Paris-Nice, the Santos Tour Down Under, stages of the Giro d’Italia, and last September, the Rio Olympics road race. Despite its winning ways, BMC felt it was time for a new edition. BMC bikes have always had a distinctive silhouette with a small bridge between the top- and seat-tubes that defined its bikes. In recent years, that bridge served little engineering importance but remained as a defining feature for BMC. However, the new Teammachine has virtually done away with the bridge, filling in the gap and opting instead for a pared back and integrated junction between the toptube and seattube, and one that doubles as the seatpost clamp. The new design resembles other models from a number of other brands, and will no doubt polarise die hard BMC fans. The new design process was extensive, to say the least. According to Stefano Gennaioli, BMC’s product marketing manager, the last generation of the Teammachine went through 34,000 virtual frames; this time, an extra 18,000 versions were generated due to the addition of extra parameters. Not content with digital results, our very own Cadel Evans has "ridden somewhere in the region of 150,000km on every model of the Teammachine over the years", according to BMC’s head of R&D, Stefan Christ.

As well as the removal of the bridge, the new design features asymmetrical chainstays and fork, in order to contend with the extra forces associated with disc braking. An asymmetrical BB86 shell increases bottom bracket stiffness by 10% and comfort has also been enahanced thanks to a lower seatpost clamp. BMC decided to produce both rim and disc brake versions of the Teammachine with some notable differences between the two.

As we'll touch on below, the disc brake version is the cleaner of the two thanks to a proprietary stem that hides the front cables. Amazingly, the frame is only 5 grams (yep, that's right), heavier than the rim brake version in a 54cm size.

The fork features an asymmetrical design, with the left leg larger than the right in order to contend with the extra forces associated with disc braking and it's a similar story at the chainstays that are asymmetrical too. The fork is also unique in another way with BMC creating its own 12mm thru-axle, which tapers through the middle to save weight. As mentioned, the rim brake version is marginally lighter than the disc version with some other subtle differences. The rim brake version gets a neat ball-and-joint cable stop for the top tube, designed by BMC to allow for extra movement for the brake cable so it will be less prone to cracking and fraying. New direct mount brakes feature, with early ride reports suggesting they work nearly as well as the disc brakes. And where many brands offer improved tyre clearance on disc brake versions, both disc and rim-braked Teammachines claimed to accommodate 28mm tyres. Following the Roadmachine's lead, the new Teammachine features next-level integration with a new proprietary stem on the disc-brake version that allows all cables to be neatly hidden away. The rim brake version is less clean, as the cables can’t be tucked away under the stem, but BMC provides an integrated GPS computer and GoPro camera mount for the stem so owners can still keep the cockpit clean and fuss-free.

Clever jigsaw-like spacers below BMC’s stem can be unclipped and removed or added without having to pull the stem off the steerer. This means owners do not have to go through the arduous process of re-routing cables every time they want to adjust the stem height like they would with a number of other popular aero road bikes from other brands that feature integrated cockpits.

Keeping the frame clean is a similar port to that found on the previous Teammachine, this sits at the top of the downtube and serves both electronic and mechanical groupsets. It has however been modified slightly to accommodate Shimano’s new Di2 downtube junction box; alternatively, an alloy plate can be fitted to accommodate traditional gear cables.

The final piece of integration is at the seatpost, which is secured by an integrated wedge system that is hidden within the toptube of the frame. As mentioned already, this was made possible by filling in the frame gap that used to define BMC's bikes.

Surprisingly, the third generation frame is heavier than its predecessor. The extra weight is attributed to the switch to direct-mount brake calipers and extra lamination which has apparently been used in an attempt to normalise the ride characteristics across all frame sizes.

A weight saving is observed at the fork, at 350g, the rim-brake version edges out the disc-brake fork by 5g (355g) compared to 373g of the previous generation. There will be plenty of options to choose from; rim- and disc-brake versions of the bike plus two tiers: SLR01 versus SLR02. According to BMC, the SLR02 bikes retain 95% of the features found on the SLR01s but will have slightly heavier forks and frames due to a lower grade of carbon fibre used.

There are seven models to choose (four rim brake and three disc) from in the SLR01 collection, as well as a frameset kit for each that includes the cockpit and seatpost in a choice of two colours. Details are scarce for the exact specifications of the SLR02 collection but it is expected to offer two rim brake and two disc brake options.

We are still waiting to confirm prices for the SLR01 range and exact specifications for the SLR02 range but both ranges are expected to be available towards the end of 2017.

To get a more detailed description and first ride impressions of BMC's latest release, check out the comprehensive article on CyclingTips. All images courtesy of Dave Everett and CyclingTips.