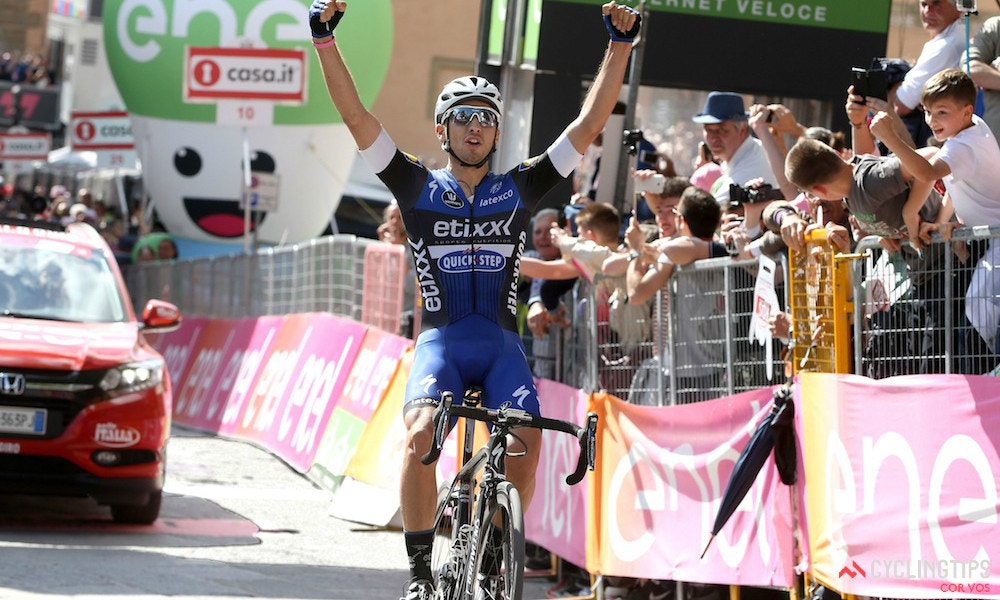 Gianluca Brambilla (Etixx-QuickStep) has moved into the overall lead at the Giro d’Italia having won stage 8 of his home Grand Tour from the day-long breakaway.

Brambilla crossed the line in Arezzo on his own, having attacked from a thinned out breakaway on the slopes of the day’s final climb. Matteo Montaguti (Ag2r La Mondiale) took second on the day, 1:06 behind Brambilla, and Moreno Moser (Cannondale) was third, another 11 seconds back, both riders having also featured in the breakaway.

Brambilla made his way into the 13-strong escape group that formed in the first 30km of the 186km stage before making his move on the Alpe di Poti climb, 25km from the finish. Montaguti had been the first to attack, but Brambilla was among the few riders that were able to mark the move, before attacking solo as the road turned to gravel.

The Italian crested the climb on his own and would remain without company until the finish.

The final climb also played host to attacks from the GC favourites, with Alejandro Valverde (Movistar) forcing a split in the peloton that saw race leader Tom Dumoulin distanced. Valverde, Vincenzo Nibali (Astana), Rigoberto Uran (Cannondale) and the other GC favourites would cross the finish 1:41 behind Brambilla while Dumoulin was more than another minute behind, his time in pink coming to a close for the time being.

The stage win is by far the biggest of Brambilla’s career and is the third stage win for his Etixx-QuickStep team at this year’s Giro d’Italia.

“This is amazing! My idea at the beginning of the Giro was to focus on today’s stage and I’ve made it but I cannot believe that I’ve done it,” Brambilla said. “I have to thank Matteo Trentin because he did an excellent job. I was the rider who initiated the breakaway but he did most of the work until I rode away in the steep part of the climb.”

“I’m delighted. Everything is going well for me this year. The birth of my daughter Asia 20 days ago has also changed my life. It’s beautiful.”

Brambilla now leads the general classification by 23 seconds ahead of Ilnur Zakarin (Katusha) with Steven Kruijswijk (LottoNL-Jumbo) in third, another 10 seconds behind.

He said he will do what he can to defend that lead.

“This year, I’m more confident in my capacities. I want to do a good Giro. The Maglia Rosa wasn’t part of the plan but that’s always hard to plan, although it has always been my dream. Being 58kg, I’m not exactly a time trial specialist but I did well at Barolo two years ago and tomorrow’s course is a facsimile of that one.

“I’ll ride flat out and if I lose the Maglia Rosa, it won’t be a drama. There’ll still be two more weeks of racing to come, and some very hard stages”.

Dumoulin sounded a little uncertain about his prospects, both in the race against the clock and also as regards the general classification.

“If you look at the situation right now, we are going back to plan A and that was winning the time trials. But right now I am just disappointed and I don’t want to think about it,” he said.

“It was just a bad day for me today. I am already having a little saddle sore, since a few days. Yesterday I didn’t feel too good, but it wasn’t really a problem. Today it wasn’t like a big problem, but I just had no energy during the race.

“For tomorrow, if I have the same power that I had today, for sure I won’t be winning the time trial. I hope to recover well and I have a good performance.”

The presence of Gianluca Brambilla in the move was of some concern to Giant-Alpecin, the Italian rider having started the day just 1:56 behind overall leader Tom Dumoulin. With the stage suiting a breakaway, Giant-Alpecin took responsibility for much of the day’s pacemaking, attempting to keep the leaders within reach and protect Dumoulin’s maglia rosa.

At the first intermediate sprint in Umbertide, 63km into the stage, it was Matteo Trentin who took the maximum points. A further 10km up the road, the leaders’ advantage had moved to beyond three minutes and was still climbing.

With 86km completed and 100km to go, the gap was out to 3:20. A further 20km into the stage it was approaching five minutes as Sean De Bie lead the breakaway over the day’s first classified climb: the third-category ascent to Scheggia.

The 13 leaders were five minutes ahead of the peloton with 50km to go; likewise with 40km to go as Giant-Alpecin continued to lead the chase. Trentin again took maximum points at the second intermediate sprint in Indicatore.

When the race crossed the finish line in Arezzo with 31km to go, the lead was down to 3:40. From there the riders headed out on a local finishing circuit which included the partially unsealed ascent of the Alpe di Poti.

Matteo Montaguti attacked from the breakaway on the lower slopes of the climb, 26.3km from the finish, and he was soon followed by Giacomo Berlato. The latter was soon dropped, however, as De Marchi, Brambilla came across to join Montaguti.

The leaders hit the gravel section of the climb with 25km to go, prompting Gianluca Brambilla to hit out alone, keen to do what he could to maximise his chances of being in pink by day’s end.

In the peloton, a touch over three minutes behind, Astana shut down a brief attack by Tobias Ludvigsson before taking responsibility for the pace-making on the climb.

When the peloton hit the gravel section of the climb, Alejandro Valverde (Movistar) went on the attack, splitting the bunch as the other GC favourites responded to the move. Vincenzo Nibali (Astana), Esteban Chaves (Orica-GreenEdge), Ilnur Zakarin (Katusha), Steven Kruijswijk (LottoNL-Jumbo), Rafal Majka (Tinkoff) and Rigoberto Uran (Cannondale) were all able to mark Valverde’s attack, but overall leader Tom Dumoulin was a notable absentee.

Brambilla crested the Alpe di Poti solo, with 18.5km to go, 25 seconds ahead of Montaguti and 2:15 ahead of the GC favourites group. It was another 1:15 before race leader Tom Dumoulin would crest the climb and return to the bitumen for the descent to the finish.

Brambilla took risks on the descent, trying to keep Montaguti at bay, but the latter was closing in, getting to within 20 seconds with 10km to go.

But with 5km to go, and back on the flat approach to Arezzo, Brambilla’s advantage was back out to 30 seconds, the 28-year-old riding his way to a stage win. Brambilla powered through the uphill final kilometre to cross the line 1:06 ahead of Montaguti and 1:27 ahead of Moser. Fellow break-mates Jaco Venter and Alessandro De Marchi followed a few seconds later, and then it was the GC favourites, lead across the line by Alejandro Valverde in sixth place, 1:41 behind Brambilla.

Almost all of the the GC contenders were in that group — Mikel Landa (Sky), Chaves, Zakarin, Majka, Nibali and Uran — but it would be more than another minute before Tom Dumoulin crossed the line.

The result saw a shake-up in the general classification, with Brambilla moving to the top of the table, ahead of Zakarin and Kruiswijk.

Tomorrow’s ninth stage of the 2016 Giro d’Italia is the second of the Giro’s three individual time trials and is sure to further shape the general classification.

Spanning 40.5km through Italy’s famous Chianti wine region, the stage is one for the pure time trialists. Tom Dumoulin will go in as the big favourite after his stage 1 time trial win and the Dutchman will be hoping to move back into pink with a second stage victory.