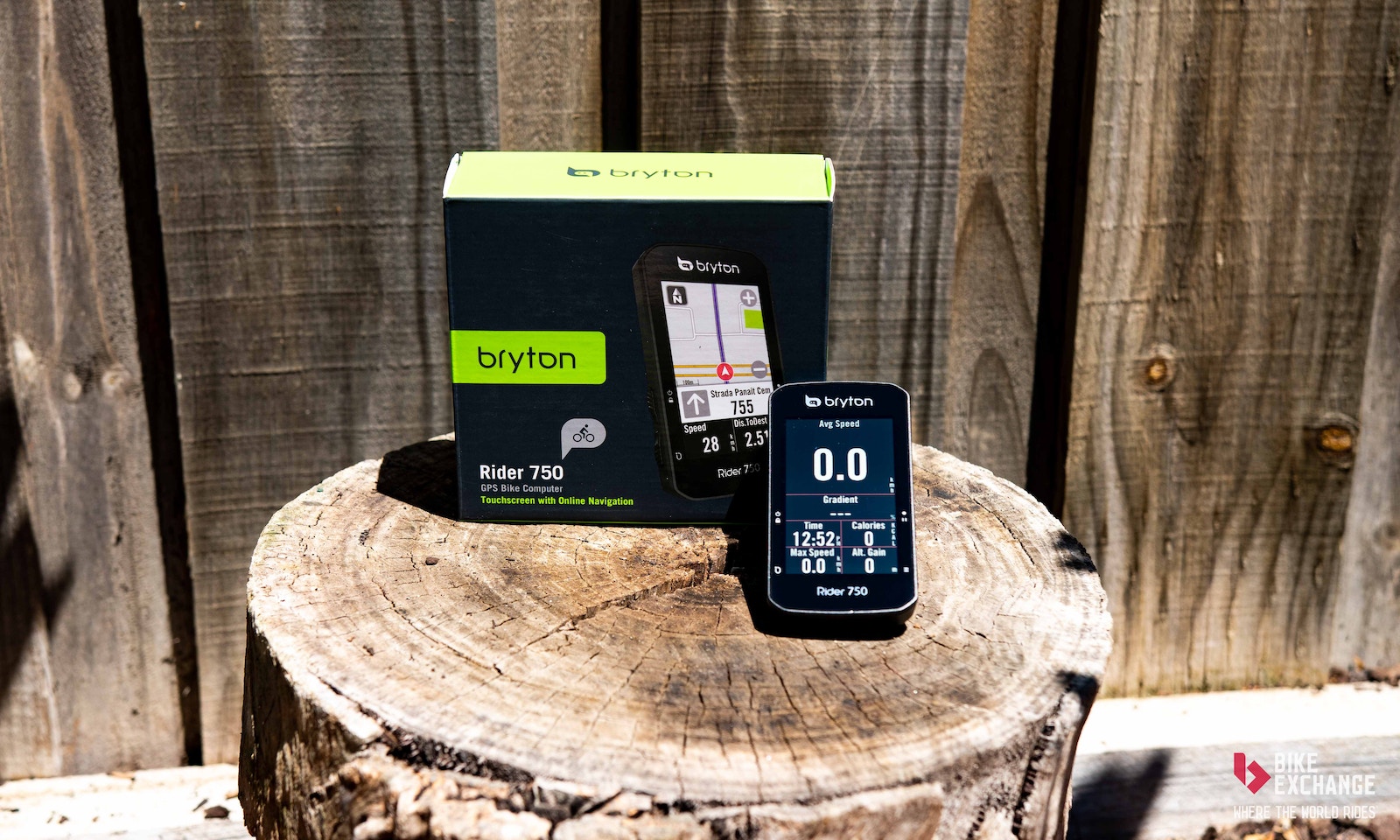 Responsible for giving us a wealth of information in real-time there’s little denying the value that a cycling computer brings to riders and the fact that they’re a great addition to any cyclist’s kit.

While the cycling computer segment is largely dominated by the likes of Garmin and Wahoo, in recent years alternative options have started to pop up, presenting as compelling alternatives to the two industry titans.

One such brand is Taiwanese outfit, Bryton, who for 2021 has released an all-new flagship head unit in the Rider 750. We’ve been fortunate enough to spend the last month and a half putting the new unit through its paces, comparing it to its key competitors to see if it could emerge as a genuine alternative for those searching for an upgrade or their first "serious" cycling computer. 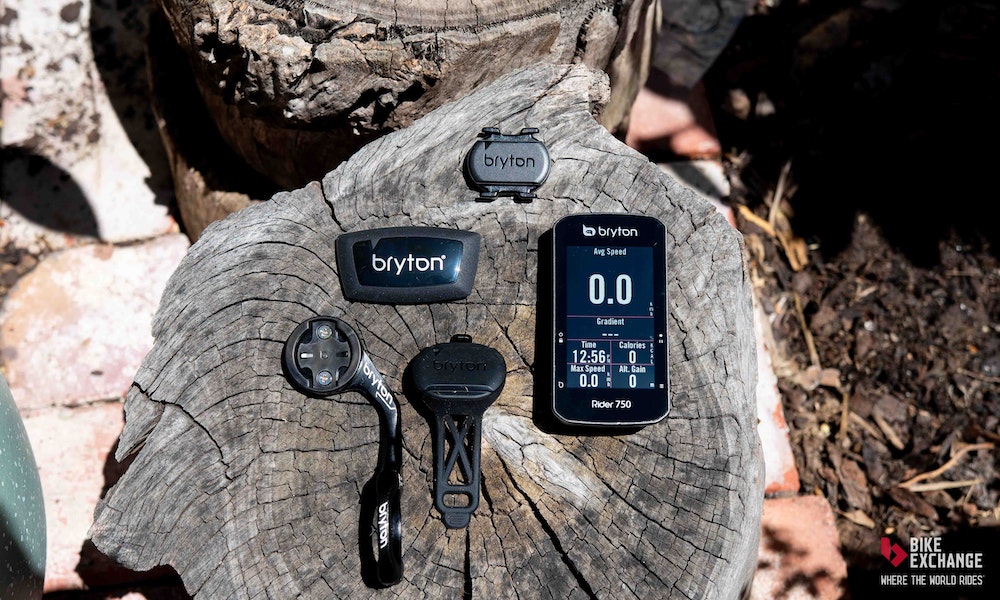 The 750E ships with the Unit, a Micro USB charging cable, a safety lanyard, standard bike mount for those who prefer to stem mount their computer, and an aluminium out front “sports mount”.

Those who opt for the Sensor bundle score the same inclusions as the 750 E with a cadence, speed and heart rate monitor also included in the box. Given the quality of the sensors provided, the additional AU$120 is well worth it in our opinion.

When it comes to specifications and features the Rider 750 reads as a seriously impressive piece of equipment, with WiFi and BLE data-sync, ANT+/BLE, Full GNSS support, 3rd party application support from the likes of Strava and Training peaks all while promising up to 20 hours of battery life the 750 looks to tick most boxes for most riders.

While the specifications are a strong point, the features and integrations are arguably stronger again. With smart trainer, electronic groupset, bike radar system and dynamic sensor support all being rolled in as standard, along with a voice search function that works surprisingly well. 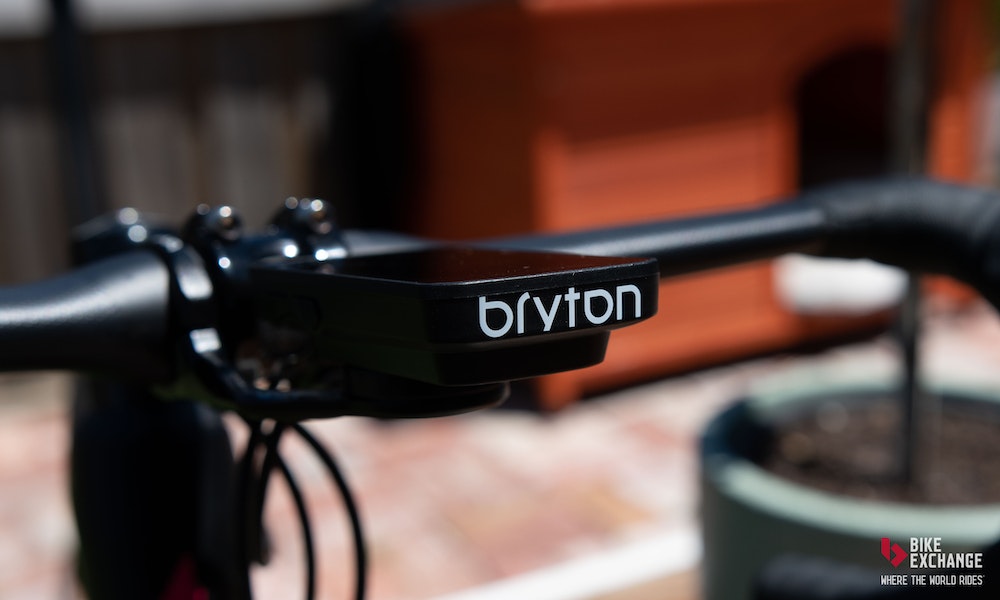 We were fortunate to receive the Bryton Rider 750 T (Bundle) from the Australian distributor ahead of the global launch at the end of 2020. Upon taking delivery and unboxing the unit, it was impressive how much is included with the device despite its relatively small form factored packaging.

The Rider 750 is a well put together bit of kit, it feels well built and materials used in its construction feel of decent quality. The four buttons offer a nice tactile response and have little input lag upon pressing them.

The included mounts and sensors received in the bundle kit were lightweight and performed flawlessly during the testing period. The speed, cadence and heart rate monitor weights range from 12 to 20g apiece and utilise a coin cell battery for power. The sports mount is manufactured from aluminium. It is well built and feels every bit the quality of aftermarket options such as K-Edge, however despite it’s Garmin looks, the mount is proprietary. 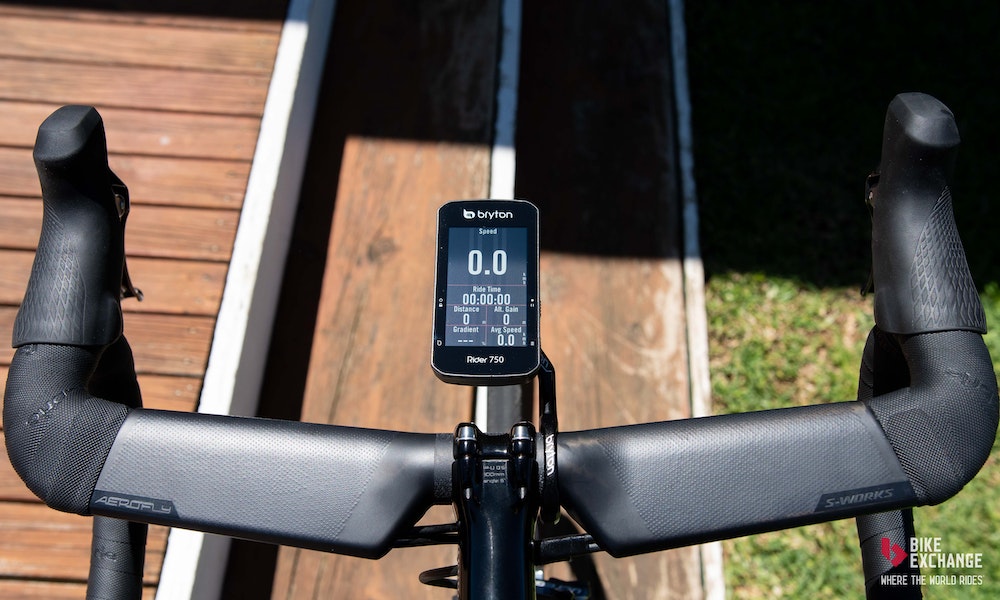 Booting up the system for the first time was also a relatively straight forward affair requiring users to select their language, download the companion app, sync the two and that’s it. While simple and short on steps, my first critique of the rider 750 was that it had a steeper learning curve than it’s competitors. The companion app is quite spartan, yet must be open in the background while using the device to utilise it’s online navigation and voice search functionality. On the device, while there are basic tutorials shown when you access each section of the device for the first time, it is lacking in some information that would’ve been nice to know. Such as how to rearrange data fields or add new data fields to each page. That being said, it’s not all that difficult to figure out in the end, it just didn’t feel as intuitive to navigate around when compared to its big brand competition.

Minor UI quirks aside, getting the unit ride ready was a breeze. The unit boots quickly, and acquires satellites quicker than both my Garmin EDGE and Wahoo ELEMNT units can. Sensors are detected and paired quickly, regardless of whether they were BLE (Bluetooth Low Energy) or ANT+ devices. What was also impressive was the list of devices the Rider 750 plays along with. Connecting up smart trainers was a breeze with no further calibrations required, it simply just worked, which is more than I can say for the Wahoo ELEMNT Roam I run as my daily driver.

However, much like the Roam, the Rider 750 has support for Garmin’s Varia Radar system, along with eTap/Di2 electronic groupset support and e-bike support. 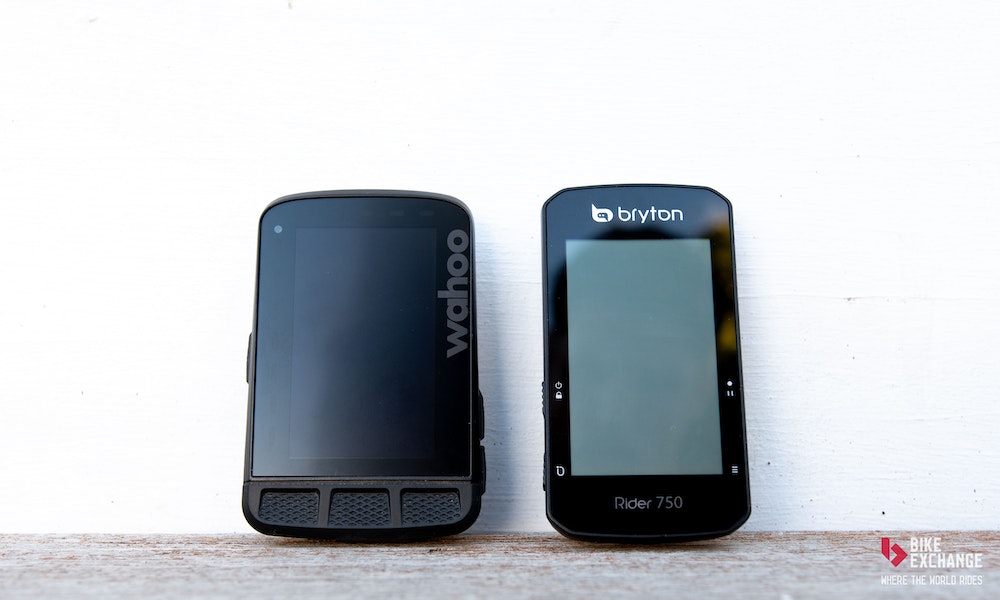 Once you’ve got a handle of the unit, using it becomes just as simple as its competitors. The 2.8” display had decent readability regardless of the harshness of the Australian summer sunlight. However, I would’ve liked Bryton to fit the 750 with anti-glare glass or offer a screen protector to further improve the display readability in direct sunlight.

While the UI is said to have been improved from previous generations, it still feels a little behind its competitors from a visual standpoint. However, this gripe is more or a personal preference for physical menu and scrolling buttons vs a touchscreen-based UI. This aside, navigating around the unit was snappy and responsive with the home screen only a swipe away regardless of how deep into the menu’s or data pages you’ve delved.

On the subject of data pages, if you’re data focussed, the ability to run up to 12 data fields at once should appeal to your interests; however, we felt the unit operated best with 6 or 7 data fields which allowed for the graph feature to run in the main position. This graph feature was an unexpected highlight and allows riders to display larger graphs of power, speed, heart rate and pedalling smoothness instead of a standard numerical readout. 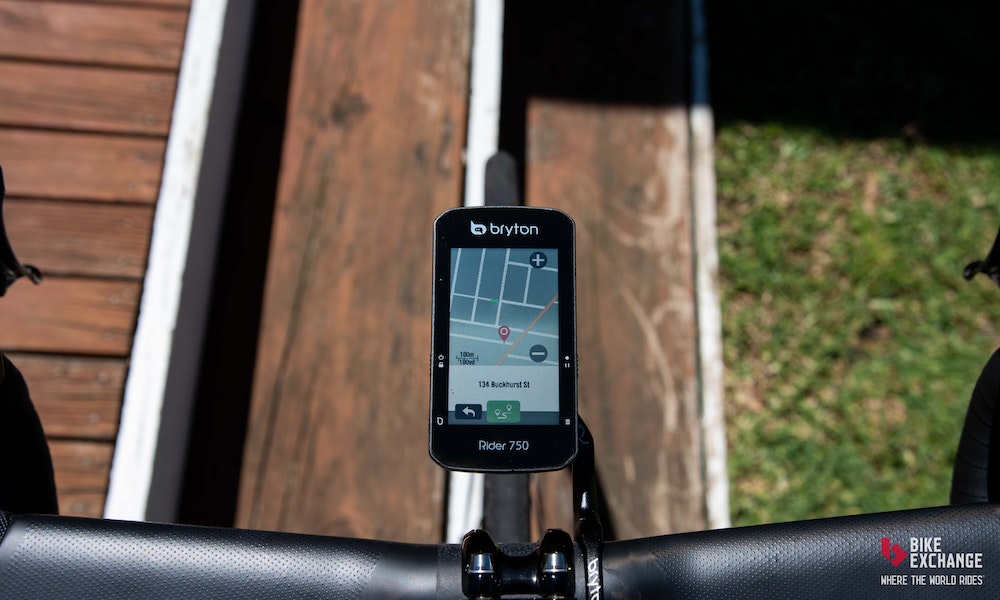 The key selling feature of the Rider 750 is arguably its Online Navigation with voice search. Much to my surprise, the voice search function worked flawlessly throughout my testing period. Which is no small feat, most cars and smartphones haven’t figured out how to nail this yet. While there were some firmware based quirks with some of the navigation routes suggested, particularly over longer distances, for the most part, the turn by turn navigation and routing system performed to the level expected of a unit at this price point.

Much like any device, using the turn by turn navigation feature will eat into your battery life. Over the course of a few battery cycles, we managed an average of 12-15 hours per charge while running the device at full brightness, resolution and utilising the navigation feature more than most typically would. As a result, we see Bryton’s claims of up to 20 hours of battery life as a little optimistic, but not far off the mark. 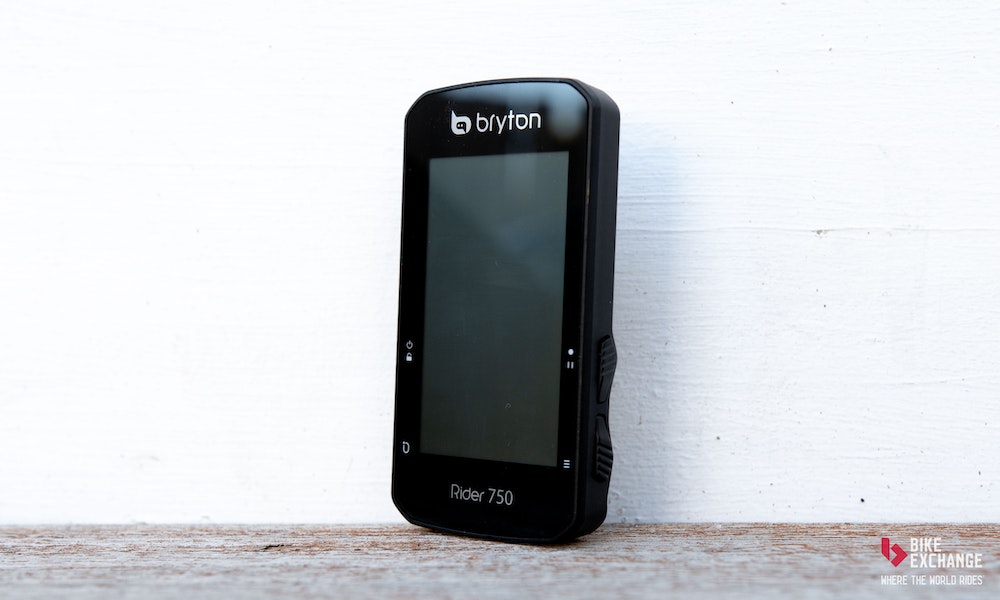 So after a decent amount of riding over our test period, we came away suitably impressed with the Rider 750. It’s on paper performance just about lives up to its real-world user experience. When you consider that fully loaded with sensors, it undercuts its competition’s base unit price, making the value proposition stronger still.

While the companion app or user interface use isn’t quite to the quality of its big brand competition, the Rider 750 performs to the same level of its key rivals. While the AU$429 OR AU$549 is by no means “cheap”, with the number of features and functionality you’re getting for the price compared to its challengers, this is one unit worthy of consideration for those in the market for a new fully loaded cycling computer.

Check out the full range of Cycling Computers and Accessories on offer from leading brands and retailers across the country right here, at BikeExchange.