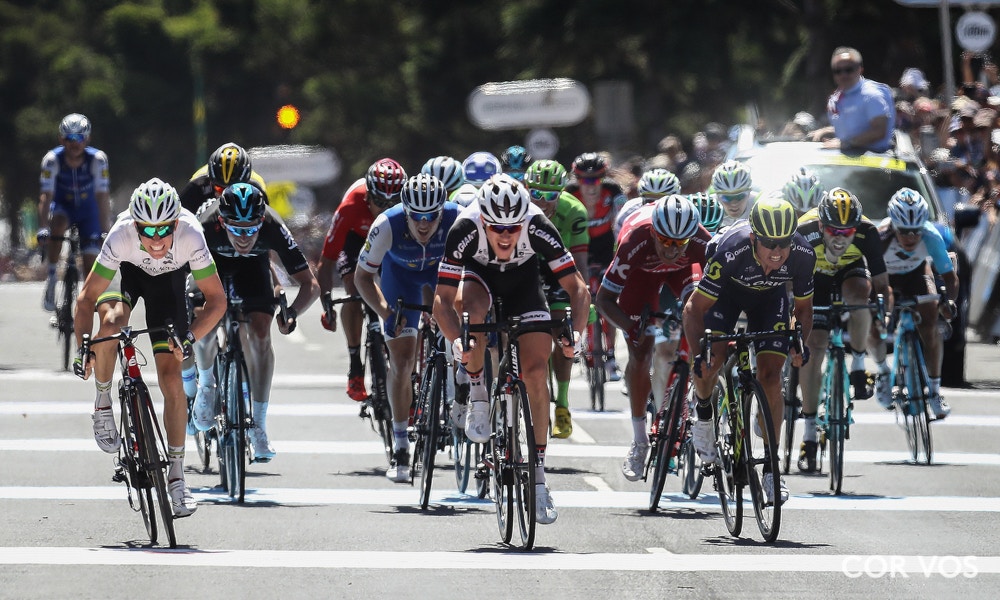 With the Santos Tour Down Under now complete, it’s time to turn our attention to the second WorldTour race of the year: the Cadel Evans Great Ocean Road Race. This one-day race starts in the Victorian city of Geelong, heads through Evans’ Australian hometown of Barwon Heads on a big loop of the region, before finishing back in Geelong.

Ahead of Sunday’s fourth edition of the men’s “Cadel’s Race” we take you through the updated course, the riders to keep your eye on, and how you can catch all the action.

The course has changed a little in 2018.

The course for Sunday’s race is more or less the same as it was the first three editions, albeit with a couple of notable changes.

In all, the riders will do nearly four laps of the 17km finishing circuit: two-thirds of a lap when they first reach Geelong, and then three full laps from the start/finish line. 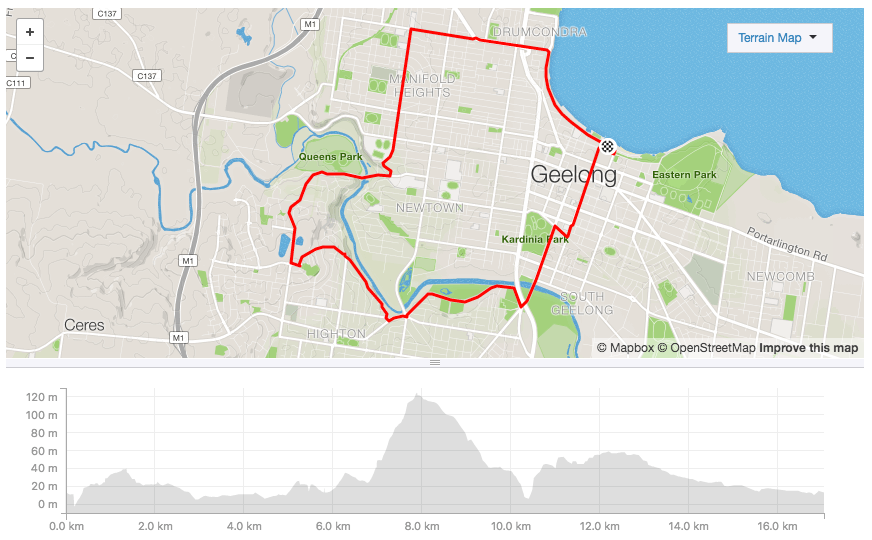 The finishing circuit around Geelong. That sharp peak in the middle is Challambra Crescent.

The changes to the course for 2018 are as follows:

Where previous editions of the race climbed Hyland Street before heading back down to the Geelong waterfront, the 2018 edition will see riders skip that diversion. This leaves just two climbs in the finishing circuit — Challambra Crescent and Queens Park Road/Melville Avenue — and shortens the length of the circuit to 17km (from 20.2km).

The shortening of the finishing circuit sees the overall race distance drop from 174km to 164km.

The race should be won from a small group or by a solo rider.

Cadel’s Race is one that could theoretically sort a range of different riders: sprinters that have a bit of climbing ability, puncheurs, and opportunists that are able to get away late.

In the three editions of Cadel’s Race so far a small-group sprint has decided the winner twice and the other was won solo. Gianni Meersman won the inaugural edition from a group of eight, Peter Kennaugh won solo in 2016 after attacking on the final ascent of Challambra Crescent, and Nikias Arndt won in 2017 from a group of 23.

The most likely scenario for Sunday is that another small group gets to the finish or that a solo rider is able to escape the peloton’s clutches and hold on for victory. Here’s how it might unfold.

There’ll be an early break that gets clear, leading the race through the big coastal loop and back towards Geelong. That group is likely to fragment and be caught as the race hits the finishing circuits and the pace increases in the peloton. If there’s a lot of wind on the day then the long, straight roads near Moriac might provide the perfect opportunity to split the race in the crosswinds.

Expect it to be a race of attrition around the finishing circuit, with more and more riders getting dropped as the kilometres tick by. The extra ascent of Challambra will make the finishing circuits harder, but the removal of four ascents of Hyland Street climb seems likely to even things out.

There’ll be plenty of attacks and small groups forming in the closing laps, particularly on Challambra Crescent. The question will be whether anything can stick. If not, it will be a reduced group of between, say, five and 30 riders that should reach the line together.

Daryl Impey goes in as one of the big favourites, but he’s not alone.

After his impressive victory at last week’s Santos Tour Down Under, Daryl Impey (Mitchelton-Scott) goes in as one of the riders to beat this Sunday. Impey hasn’t lined up at Cadel’s Race before but it’s a course that suits him perfectly — the South African’s good enough uphill to get to the finish in the lead group without issue and he’s fast enough on the line to beat just about anyone from a small group.

There can be no doubting Impey’s form — he trained the house down in South Africa prior to the Tour Down Under, and it showed. He was second in the uphill sprint into Stirling, second on a tough day into Uraidla, and then second up Willunga Hill behind Richie Porte (BMC). Impey will likely back himself for a small-group sprint and, depending on who’s there, he could prove hard to beat. 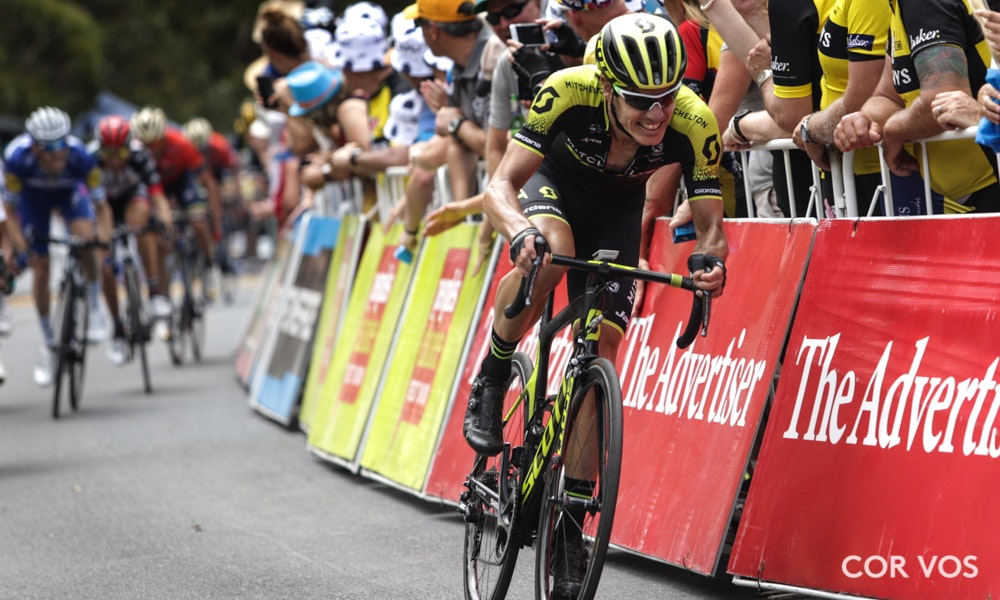 It will be intriguing to see how Impey goes if he comes up against old teammate Simon Gerrans (BMC) in a reduced bunch kick. Impey spent many years riding for Gerrans, particularly at the Tour Down Under, but he showed last week that when he gets his chance he’s more than capable of delivering. Gerrans is another rider that goes into the race as a big favourite. He was second last year, fifth in 2016 and like Impey, he’s perfectly suited to this race.

In his two outings so far this season Gerrans has raced in a support role for Richie Porte and Rohan Dennis. On Sunday, BMC will ride for Gerrans. It will be fascinating to see where Gerrans’ form is at, particularly in the sprints — something we haven’t seen him do yet this year. If he’s on form and can be there at the finish, it would be no surprise at all to see Gerrans take the win.

Look to BMC to try several cards throughout the day. Porte attacked late last year and might be tempted to attempt similar this time around. Rohan Dennis is in good form too and might also be tempted to get off the front. 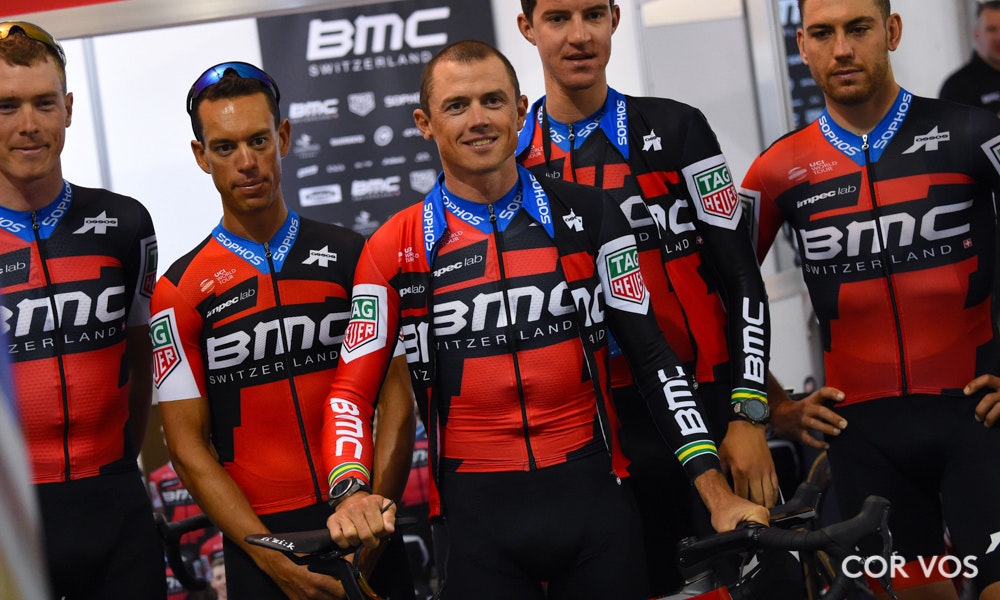 Gerrans is just one of several options for BMC on Sunday.

Nikias Arndt (Sunweb) was something of a surprise winner of last year’s race but the German won’t fly under the radar this year. Many teams will be wary of bringing Arndt (or his teammate Phil Bauhaus) to the finish line as he’s shown he’s got a very handy sprint from a small group.

Peter Kennaugh (Bora-Hansgrohe) won’t be given as much rope this year as he was when he won in 2016 — his rivals are fully aware of his capabilities by now. But the Manxman will be just one of a couple strong options for Bora-Hansgrohe — Jay McCarthy is another strong contender to win a reduced bunch sprint.

McCarthy would have been disappointed with his 19th overall at last week’s Tour Down Under (after finishing third in 2017), and he’ll be keen for a strong showing on Sunday. 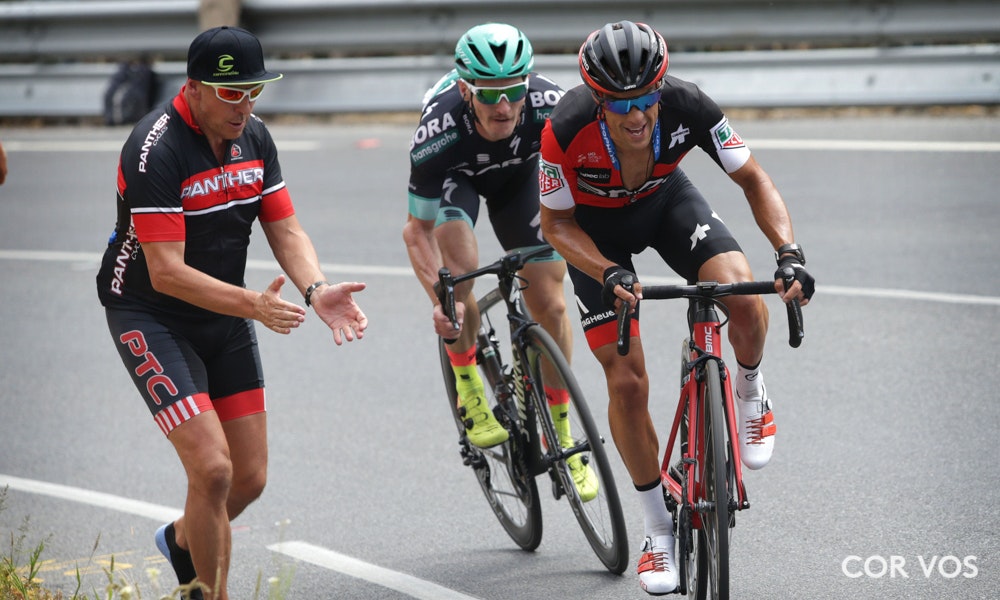 McCarthy was able to follow Porte’s race-winning move on Willunga last Saturday, but only briefly.

Nathan Haas (Katusha-Alpecin) always seems to earn a mention in the same breath as McCarthy, and with good reason. The pair have very similar strengths — good uphill, fast in a sprint — and they’ve had some very great battles over the years. Haas, too, will be disappointed not to have reached the podium at the Tour Down Under and will be looking to make amends on Sunday.

Haas is very much a contender — in three editions of the race, he’s finished third, sixth and seventh. It would be no surprise if he could take the win on Sunday. 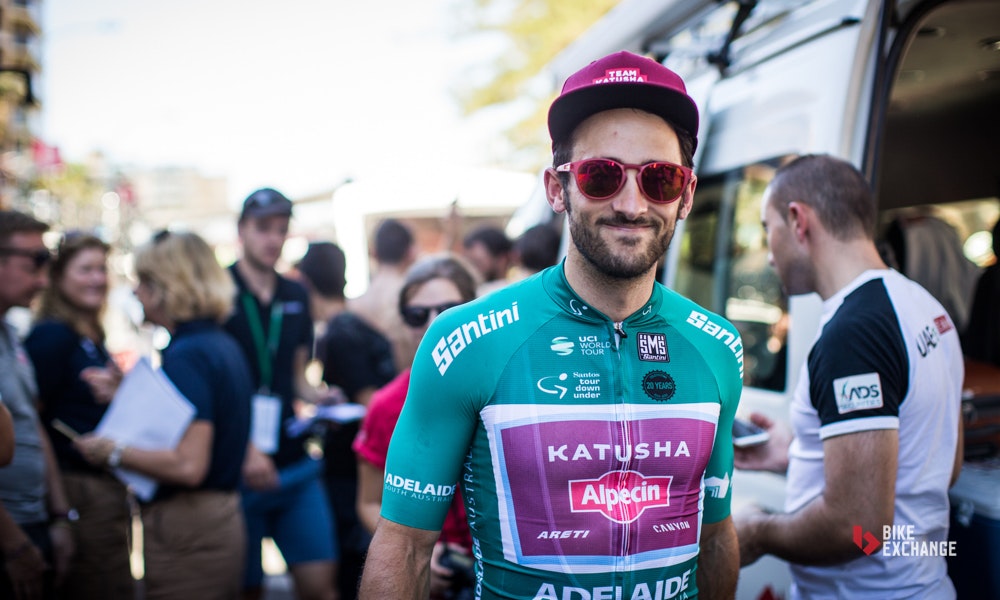 Haas is a genuine contender on Sunday

There are many others that shouldn’t be discounted.

While the riders above are perhaps the most likely to take the spoils on Sunday, there are many other riders that should be factored in.

Jhonatan Restrepo (Katusha-Alpecin) is an exciting young rider that, like his teammate Haas, is good uphill and good in a sprint finish. The 23-year-old Colombian was fourth in last year’s race (beating Haas in the sprint) and provides another strong option for Katusha-Alpecin on Sunday.

Dries Devenyns (QuickStep Floors) flew under the radar at the Tour Down Under, riding to fifth overall off the back of two impressive performances in the race’s hilly stages. If he’s feeling strong the 34-year-old Belgian might be tempted to attack late.

Tom-Jelte Slagter (Dimension Data) brings good form into Cadel’s Race, having finished third at the Tour Down Under. He’s another all-rounder that won’t mind the punchy hills of Geelong and shouldn’t be forgotten in the closing stages. 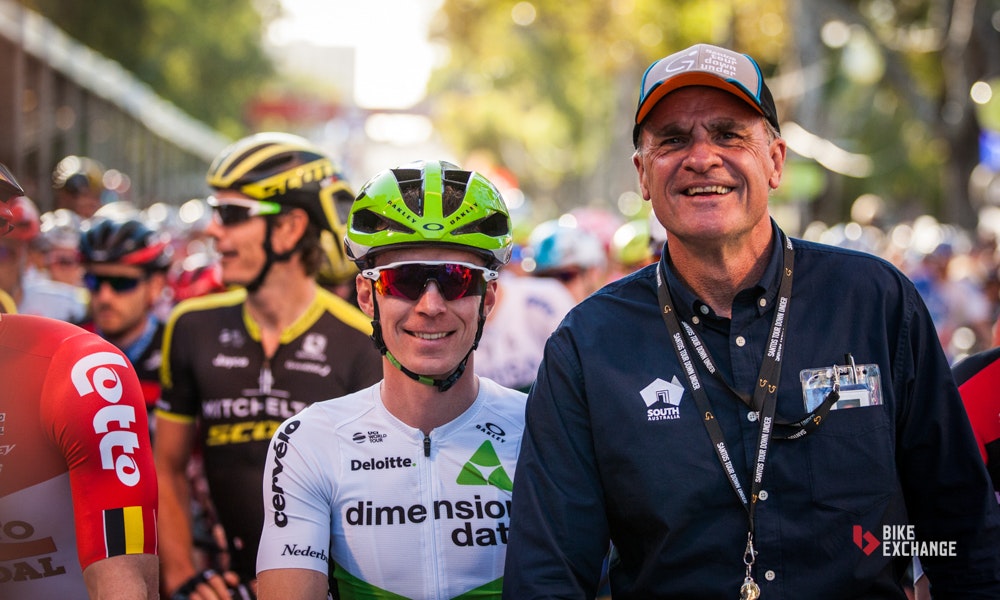 While Mitchelton-Scott will likely be all-in for Impey on Sunday, they have a number of other options waiting in the wings. Cameron Meyer nearly pulled off a significant coup in last year’s race while riding for the Australian national team. Meyer attacked late and almost managed to hold off the bunch, finishing third in the process. He might be given free reign to try something late again on Sunday, and definitely needs to be marked if he does.

Esteban Chaves (Mitchelton-Scott) isn’t likely to win the race on Sunday, but we might see him lighting things up on the climbs around Geelong if he’s feeling strong. If nothing else it will be interesting to see what sort of form he’s in ahead of next week’s Jayco Herald Sun Tour.

It’s going to be a scorcher on Sunday.

The Bureau of Meteorology is forecasting a maximum temperature of 40ºC for Sunday’s race — unpleasant conditions for bike racing. If nothing else, the heat will mean that the race is even more taxing than usual, likely thinning out the field even more in the closing kilometres.

It’s worth noting that there are also some north to northeasterly winds forecast for the day. This means there could be crosswinds on the approach to the finishing circuits in Geelong — a tantalising prospect for sure.

The race will be broadcast live on TV and online.

The entirety of the men’s Cadel’s Race will be broadcast live by the Seven Network with coverage available on Channel 7 and the 7Plus app from 11 am Melbourne time. The race will also be broadcast into more than 100 territories worldwide – visit the event website for more information.

To follow the race live on Twitter, follow the #CadelRoadRace hashtag. Be sure to stay posted to our mates over at CyclingTips for coverage from the race as well.

This article was originally published on cyclingtips.com. Imagery courtesy of Cor Vos and Tim Bardsley-Smith