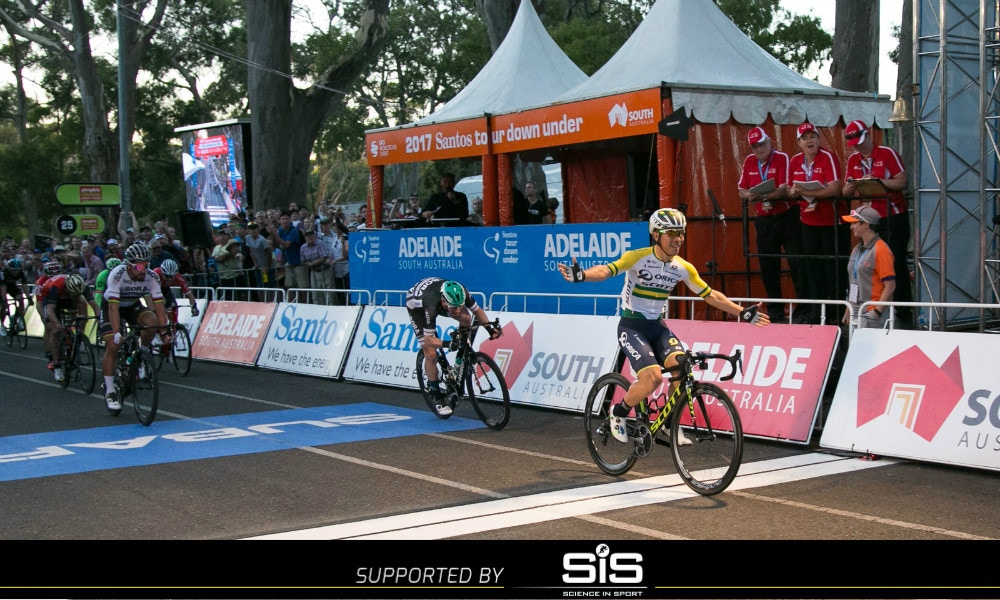 ADELAIDE, Australia (CT) – The battle between Caleb Ewan (Orica-Scott) and Peter Sagan (Bora-Hansgrohe) looms as one of the most fascinating of this year’s Santos Tour Down Under. Ewan, the young Australian speedster, so often billed as one of the world’s most promising sprinters. Sagan, at the height of his powers, the two-time reigning world champion and five-time Tour de France green jersey winner.

This evening, on the streets of East Adelaide, it was Caleb Ewan that drew first blood at the 2017 Tour Down Under. But it wasn’t exactly the head-to-head with Sagan that many were expecting.

Twenty-two-year-old Ewan, in the green and gold of Australian criterium champion, dashed to a convincing win at the People’s Choice Classic, the curtain-raiser criterium that precedes the Tour Down Under by two days. Sam Bennett (Bora-Hansgrohe) was a distant second while Sagan, on lead-out duties for his Irish teammate, claimed third.

Ewan rode the criterium to perfection, repeating the victory he claimed a year ago in the same event. He cruised around the 2.3km circuit near the back of the peloton for all but four of the race’s 22 laps. Only when the pace increased in the closing kilometres did Ewan move up the bunch.

He slotted in towards the back of the Orica-Scott train, his teammates having done most of the work at the front of the peloton to catch lone leader Ben O’Connor (Dimension Data) with two laps to go.

Ewan’s new lead-out man, Roger Kluge, delivered his young teammate into a perfect position (see video below) in what was the pair’s first race together.

“I don’t think it usually happens like that,” Ewan said of the pair’s instant success. “But all I had to do was really follow him. In the last couple of laps he was sitting behind me so I got a better ride up the front and I was surprised he was still there because it was so messy behind me at the end.

“So he did super-well and came around me with about a lap to go and then just led me out perfectly.”

Ewan started his sprint earlier than he had planned, but once he did, no one was able to come around him. He crossed the line several bike lengths ahead of Bennett while Sagan had to settle for third.

While the People’s Choice Classic doesn’t contribute to the Tour Down Under’s general classification, it is a good test for the sprinters ahead of the race’s official start on Tuesday. For Ewan, the win is an ideal confidence-booster.

“It’s so important to get the week off to a good start and a sprint like that gives me a whole lot of confidence going into the tour,” Ewan said. “Probably the main thing is just getting that confidence going through to the next races.”

A key component of that confidence is getting an early victory over Peter Sagan, even if the Slovakian wasn’t Bora-Hansgrohe’s Plan A for the race.

“Coming into the race, obviously no one really knows how anyone else is going so I’m just happy that I could get one over him at the start,” Ewan said. “Like I said before it just gives you a whole lot confidence going into the next stages and as a sprinter that’s what you really need.”

For Sagan, the result wasn’t a particularly satisfying one.

“It was good, but not super-good – it was ok,” Sagan said of the race. “We did a good job, but not enough for the win. We wanted to win with Sam Bennett but he was second. I will recover and we will see for the Tour Down Under.”

For Bennett, the opportunity to have a two-time world champion lead him out was nerve-wracking.

“Peter Sagan is leading me out?! I was shaking,” Bennett said. “There was a big fight for his wheel. I was nervous. I didn’t want to take away an opportunity for Peter, because it is the first race of the season with the new team.

“I hope I can pay them back with a win this week.”

Bennett’s words suggest an interesting possibility — that it will be he that’s given the opportunity to sprint for Bora-Hansgrohe in the Tour Down Under. Or, at the very least, that he will be the team’s designated man for at least one of the four stages likely to end in a sprint.

Will we get to see the much-anticipated head-to-head battle between Ewan and Sagan? That remains to be seen, but we mightn’t have to wait long to find out.

Tuesday’s stage 1 of the 2017 Tour Down Under takes the riders 145km from Unley to Lyndoch. With a fast downhill run to the line it’s almost certainly going to be one for the sprinters. Stages 3,4 and 6 are also likely to end in a bunch kick.

Regardless of whether Bora-Hansgrohe opt for Sagan or Bennett throughout the tour, Ewan’s victory this evening suggests he is the rider to beat. He and his Orica-Scott team will be hoping he can equal, if not beat, the two stage wins he claimed in last year’s edition of the race.

This article was originally published on cyclingtips.com. Image supplied by CyclingTips.