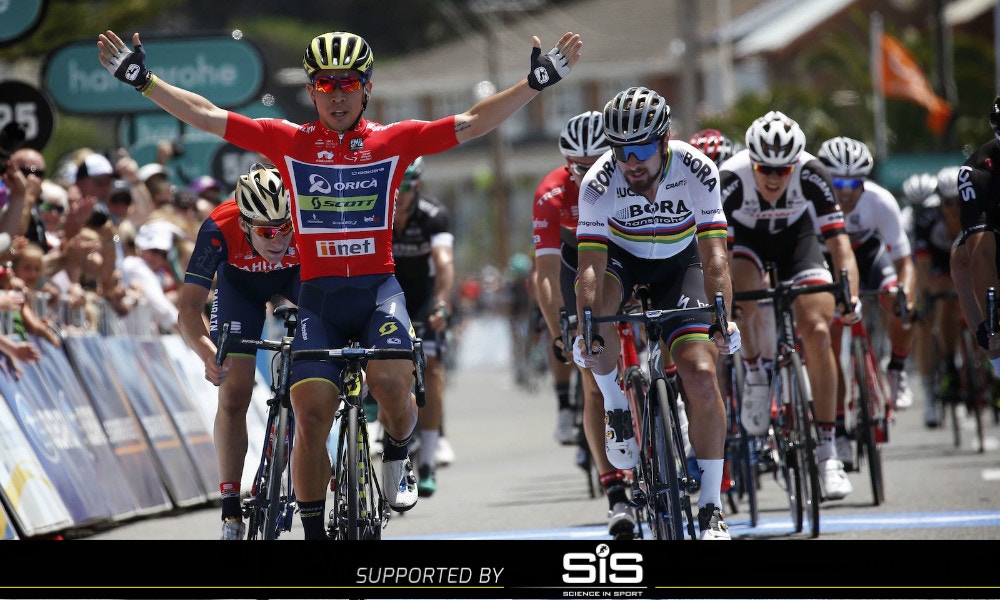 ADELAIDE, Australia (CT) – When Caleb Ewan (Orica-Scott) blasted across the finish line to win stage 3 of the Santos Tour Down Under this afternoon, it was his second stage win of the TDU and his third victory of the week. And yet it was only today that the 22-year-old clearly showed he’s the strongest sprinter in the race.

Two days before the TDU, Ewan won the People’s Choice Classic criterium in impressive style, but he did so with Sam Bennett (Bora-Hansgrohe) as his main rival and Peter Sagan on lead-out duties. Likewise on stage 1 when Bora-Hansgrohe had planned to sprint for Sagan, but the world champion decided during the race that Bennett would again get the nod.

But on stage 3, the much-anticipated Ewan vs Sagan showdown finally happened and it was Ewan that emerged victorious. It wasn’t particularly close either — Ewan hit the front first and Sagan didn’t just struggle to get around his younger rival; he struggled to even hold his wheel.

Perhaps more impressive than the final margin in Victor Harbor was the way Ewan manoeuvred himself into position. A crash inside the final three kilometres saw Daryl Impey get held up, leaving Ewan without a key lead-out man in what turned out to be a chaotic final sprint. He navigated his way through the field with apparent ease though, before punching through for victory.

“Because we didn’t have Daryl there, Roger [Kluge] and Durbo [Luke Durbrige] helped him into position,” said Orica-Scott sports director Matt White. “[In the] last 600 meters [Ewan’s] come from a long way back and read the sprint very very well. And if you look at the overhead shot he was seventh or eighth wheel with 400 meters to go and won by three bike lengths.”

Sagan, too was impressive in the final, avoiding the late crash and then weaving his way through heavy traffic to get into position for the final kick. But when it came time to sprint, he was simply outgunned by Ewan — no mean feat from the 22-year-old.

But while Ewan is the strongest sprinter in the 2017 Tour Down Under and has proved as much, there’s an important caveat that needs to be considered.

“It’s January,” said White. “So we’ll put it into perspective when we get back to Europe in March and have a field of world-class sprinters.”

Sagan was able to recognise that he was beaten by a stronger rider on the day, but he too hinted at the need for Ewan’s victories to be seen in the appropriate context.

“He’s riding at home, he was all the winter here in Australia training in good weather, and I just finished the season in the end of October,” Sagan said. “I did one month without the bike, relax, holiday, and then I started training in December. I am really happy with how I am riding now.”

For Sagan, the Tour Down Under is a stepping stone to bigger goals in the Spring Classics and likely the Tour de France. Ewan, too, has goals later in the year, but the Tour Down Under is one of his biggest targets. It’s a WorldTour race on home soil where winning is particularly valuable for his team and local sponsors.

“For sure he is really motivated for this kind of race because it’s the first race, he’s at home, he wants to win, he’s a good sprinter,” Sagan said. “[But] for now it’s not here like [Marcel] Kittel, [Andre] Greipel, [Fernando] Gaviria, the best sprinters in the world.

“But still he’s winning a lot because he’s the best here I think. He’s a really fast guy, he’s 22, still young, he can learn a lot and take a lot of experience. But still he has to start riding big races.”

Ewan, too, recognises the need to see the bigger picture; to be satisfied with his victories on home soil, but to look ahead to when he’s against the world’s best at peak fitness.

“I don’t know what kind of form he [Sagan] is in,” Ewan said. “So yeah you know, it’s still going to be hard to beat him during the year.”

Ewan has beaten Sagan head-to-head in Europe in the past — he won the bunch sprint on stage 5 of the 2015 Vuelta a España ahead of Sagan and John Degenkolb. He’ll be hoping for a similarly significant victory (or victories) in Europe come 2017. They got clear in the opening 10km and built a lead that peaked above four minutes, but with Orica-Scott and other teams keen for a bunch sprint, and BMC keen to keep overall leader Richie Porte out of trouble, the race was destined to come back together in the closing kilometres.

Laengen took a flyer from the break with roughly 24km to go and he was the last to be caught inside the final 5km. A late crash left second-overall Gorka Izagirre (Movistar) battered and bruised, but with the crash occuring inside the final 3km, he didn’t lose any time.

Likewise with Richie Porte who avoided the late crash to get through to the finish and defend his ochre jersey. He continues to lead the race overall and will have his eye on a fourth straight win on Willunga Hill on stage 5 — a win that would put the GC well beyond doubt, if it isn’t already.

In the meantime, the Ewan vs Sagan battle is likely to continue in tomorrow’s stage 4. Given what we now know, tomorrow’s race is perhaps Sagan’s best chance of a stage victory at this year’s Tour Down Under. The fast, technical run-in down Gorge Road is right up Sagan’s alley, as too is the slightly uphill drag to the line in Campbelltown.

Will the two-time reigning world champion take his first win of the season at the Tour Down Under tomorrow? Or will Ewan add to his tally of stage wins at the race, overtaking the two he claimed in 2016?

All things being equal, and given today’s performance, Ewan will be the rider to beat.