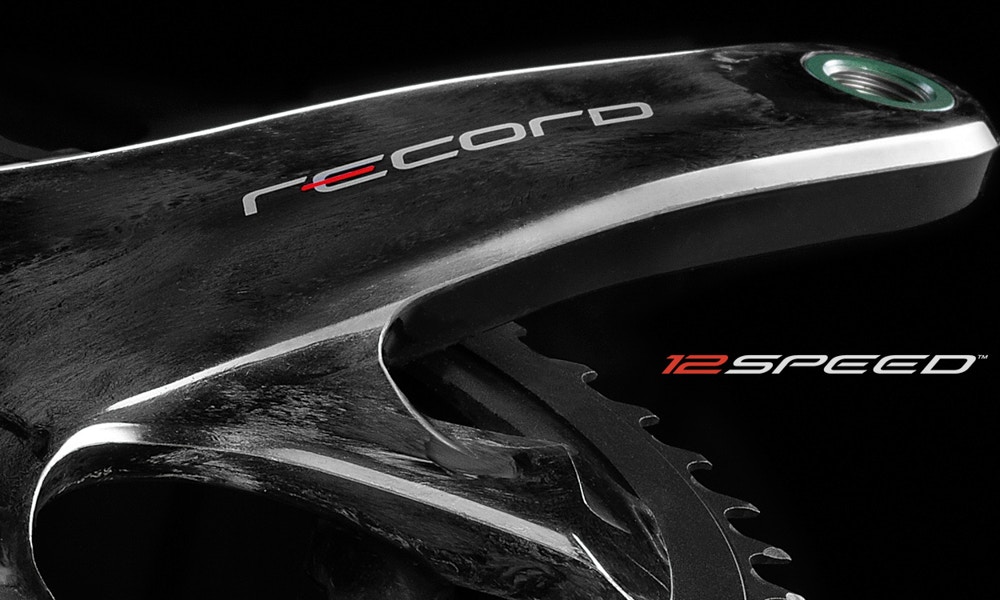 Much like Spinal Tap, Campagnolo were the first to take it to 11, and now for 2018, they’ve cranked it up to 12. Yep, 12-speed shifting has hit the road, and Campagnolo have new Super Record and Record mechanical groupsets to showcase it.

In a case of revolution, rather than evolution, wholesale changes have been made the iconic Italian company’s flagship groupsets. These include all-new cassettes, revised brakesets for both rim and disc applications, new cranksets, shifters, a sleek new aesthetic as well what Campagnolo claim is a best in class aero wheelset.

And for those dreaming of a new electronic (EPS) 12-speed groupset, you’ll need to wait a little longer. Without a doubt, such a thing is on the way, but it remains in the works.

With so much new tech to dive into, we’ve grabbed the meatiest bits to provide the ten most important things to know about the all-new Campagnolo Super Record and Record 12-speed mechanical groupsets.

1. More than the Sum of its Cogs 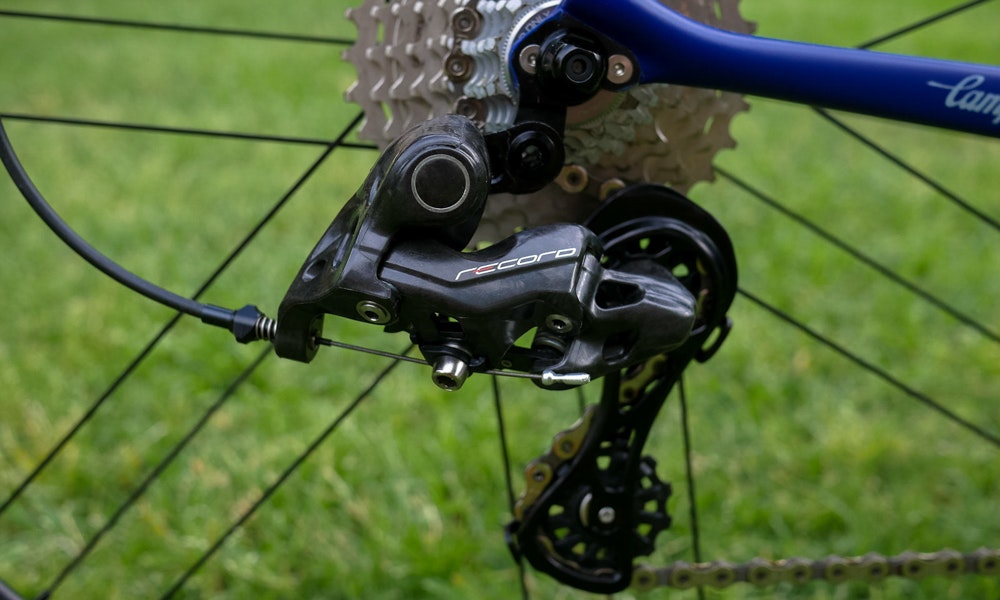 There were rumblings on the rumour mill that a new group was underway, after a patent detailing a 12-speed cassette was unveiled a month ago. As was the case when manufacturers first moved from 9 to 10-speed, and again from 10 to 11-speed there’s little hiding from the polarizing nature of adding another cog to a groupset.

The beauty of Campy’s approach to the two new groups, however, is that it simply wasn't a case of updating a rear derailleur and adding another cog to the cassette, rather a wholesale change that’s rarely seen in such a refined area such as high-end bicycle components. These changes will likely polarize purists, however, there’s no doubting that the new groupsets are a brave step for the typically conservative Italian company 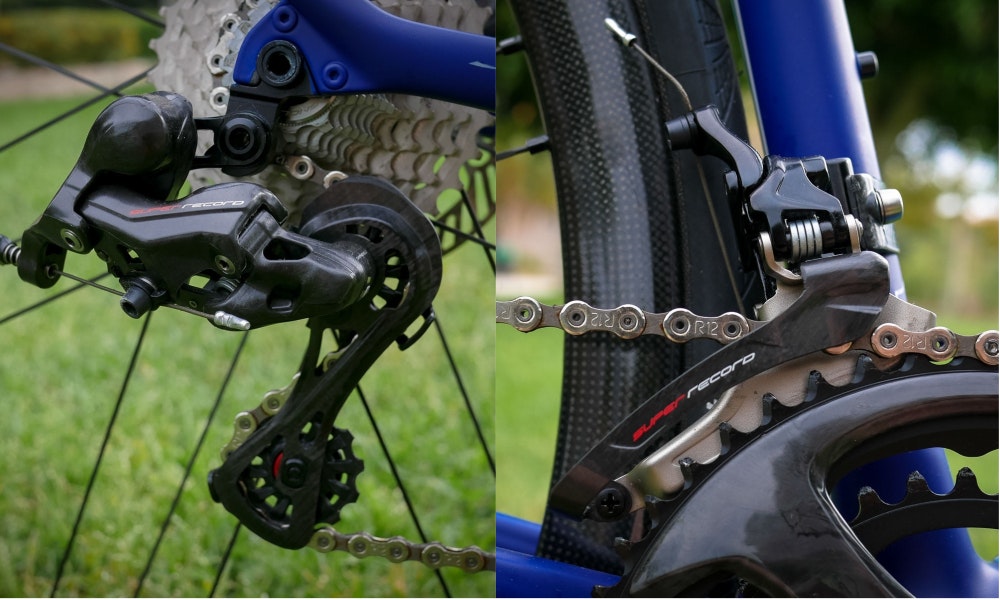 Responsible for the shifting and efficiency of the new groupsets, few components play as big a part in the feel and performance.

Starting with the most extensively changed of the two, the rear derailleur features a longer body, new parallelogram geometry, and a longer pulley cage. The jockey wheels themselves have stepped up to 12t a piece with the upper pulley featuring larger teeth to move the chain across the cassette more efficiently.

Up front and whilst the visual changes aren’t as noticeable as those found on the rear derailleur, they’re equally as extensive. The main change is that Campagnolo has separated the cable lever arm from the outer parallelogram plate. No longer one piece, the cable arm now pushes on a tab about halfway down the outer derailleur body plate. The pivot points have also been shifted which Campagnolo say aids in a straighter chainline and a more linear movement of the derailleur itself. 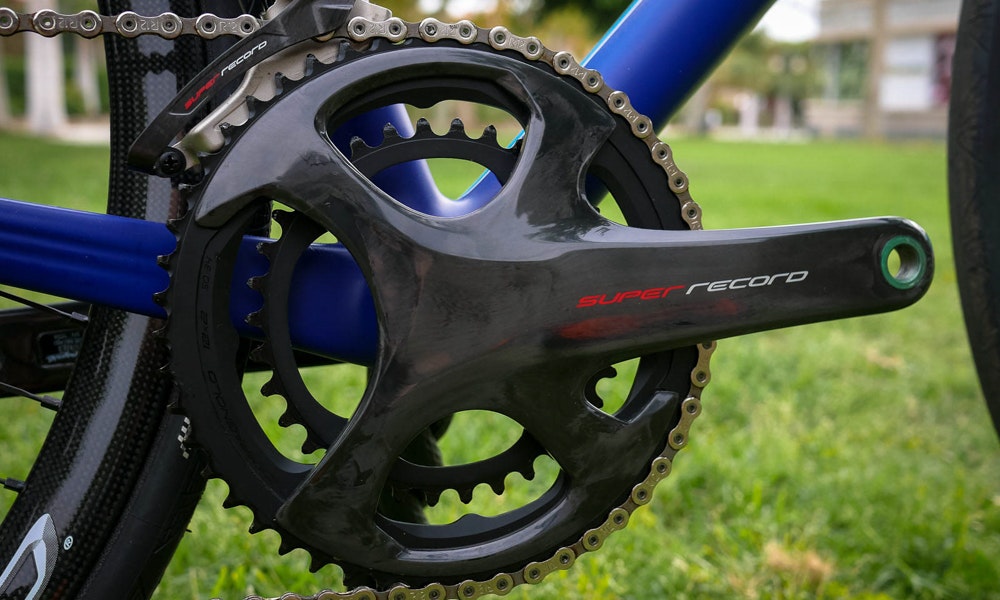 Perhaps the most visible feature of any new groupset is the largest component of them all, the crankset. Complete with a sleek new aesthetic, new manufacturing techniques using different materials and subtle reinforcement for added stiffness, the new cranksets are the most radical and yet refined, Campagnolo has produced.

The crank centre has been smoothed over to aid in aerodynamics and aesthetics whilst a new backing plate is said to increase stiffness over its predecessors. The new cranksets are available in crank arm lengths of 165mm, 170mm, 172.5mm and 175mm.

The chainrings themselves have also been updated, with rounded tooth profiles on the inner chainring claimed to provide quieter running at various chain angles whilst a new anodized finish is said to provide better durability. 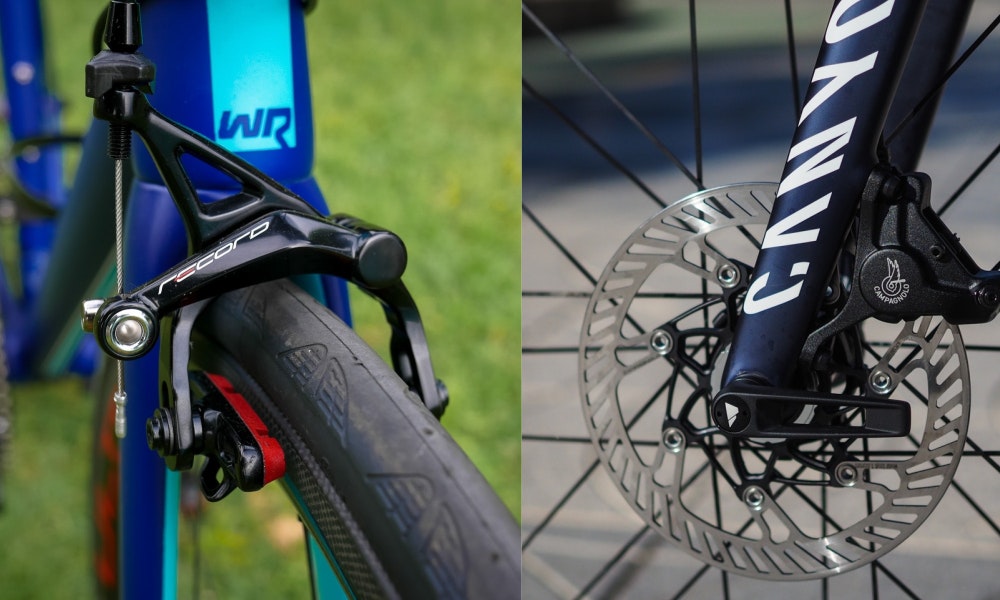 Revamped rim brake calipers are set to be a highlight which are claimed to be lighter and more effective than ever. Offered in both center-mount and direct-mount formats, the latter makes use of a new backing plate that is said to increase stiffness under load, allowing for greater braking modulation and performance. Whilst both brakes will accept 28mm-wide tyres with ease, there should be a little room to spare if you’re a fan of even wider rubber.

Disc-brake iterations of the new groupsets carry over the majority of the same technology debuted last year with the release of the H11 hydraulic disc brake components, save for the new 12-speed Ergo shifters (more on that later) 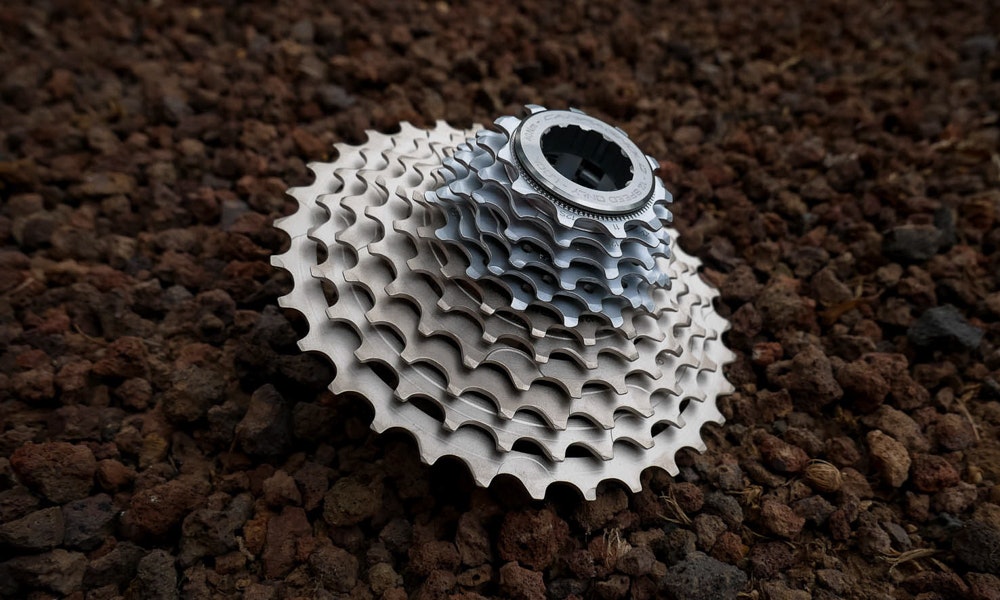 More than just an extra cog, two new cassettes accompany the Record and Super Record groups that are vastly different than their predecessors, and yet, still fit on the same sized freehub.

For the Record cassettes, the six smallest cogs are steel plates, whilst the largest six sprockets are split into two triplets. These are each machined from a single block of steel which is claimed to keep weight low, while also improving durability.

There are two cassette sizes to choose from, 11-29 and a wider 11-32 option for those seeking a little more range again. As the new cassettes fit on existing 11-speed freehub bodies, the plates are narrower and stacked differently to the cogs found on 11-speed groups, and as a result, a new chain was required. Whilst the links are a bit shorter and the chain narrower, Campagnolo claim the 12-speed chains are equally as durable as the 11-speed predecessors. 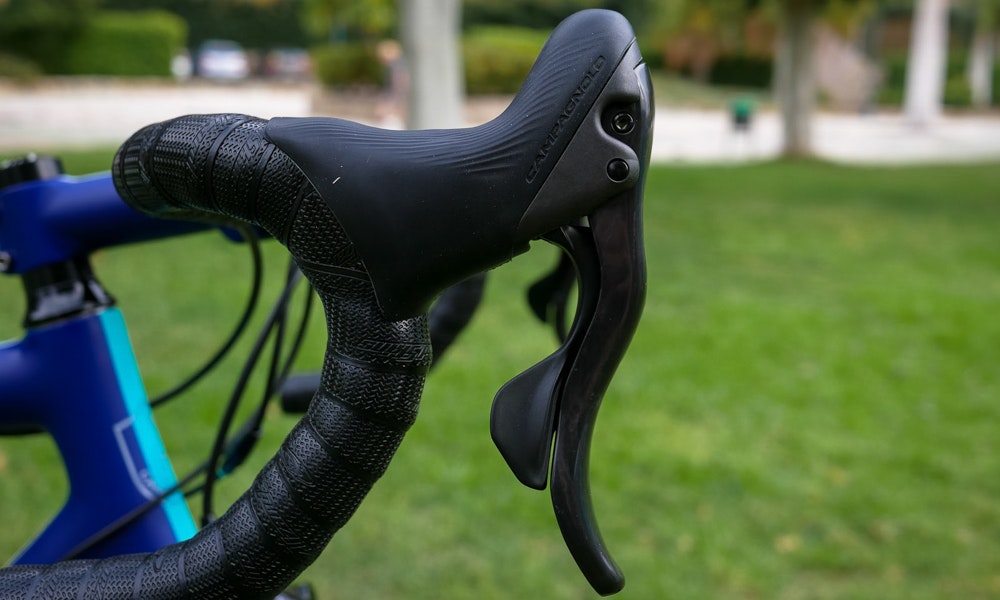 The adjustment capability was first unveiled with the H11 range of disc brake components last year, and now smaller handed riders can get such a feature with rim brakes. Both rim and disc levers now adjust the shift and brake levers in tandem.

Campy claim that much of the free play in the main shift lever has been eliminated resulting in more responsive shifting. Thankfully the class-leading multi-shift capability carries over with the shifters capable of making up to five downshifts or three upshifts per lever sweep. 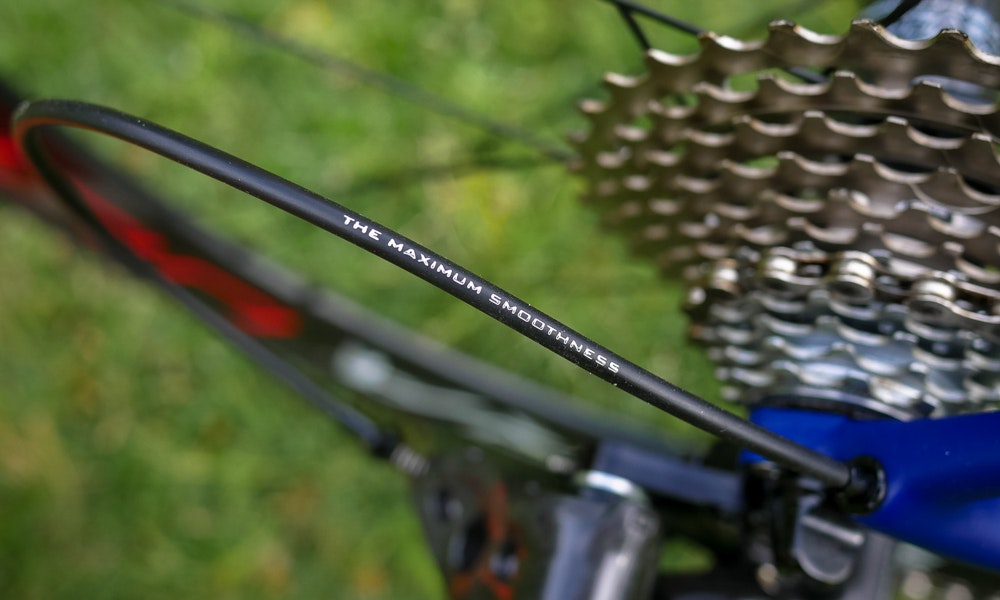 Shift lever effort is claimed to be tangibly easier across both rim and disc groups compared to 11-speed groups. Whilst this is somewhat as a result of updated Ergopower levers and those radically new derailleurs, Campagnolo claim the bulk of this is due to new cables and housings that are said to “drastically reduce friction.”

Releasing not one, but two groupsets at the same time, this is easily the largest release Campagnolo has undertaken in the last few years. So with Record and Super Record both operating at the top of the campy groupset hierarchy, what are the differences between the two?

With a more generous helping of weight relieving materials such as carbon fibre, titanium and making use of higher-end ceramic bearings, Super Record scores a host of improvements over its stablemate. That’s not to say that Record is hefty though, with a claimed weight of just 2,213 grams for the rim brake groupset, it weighs in at a mere 172 grams heavier than its (much) more expensive counterpart. Super Record is claimed to tip the scales at 2,041 grams for a rim brake groupset. 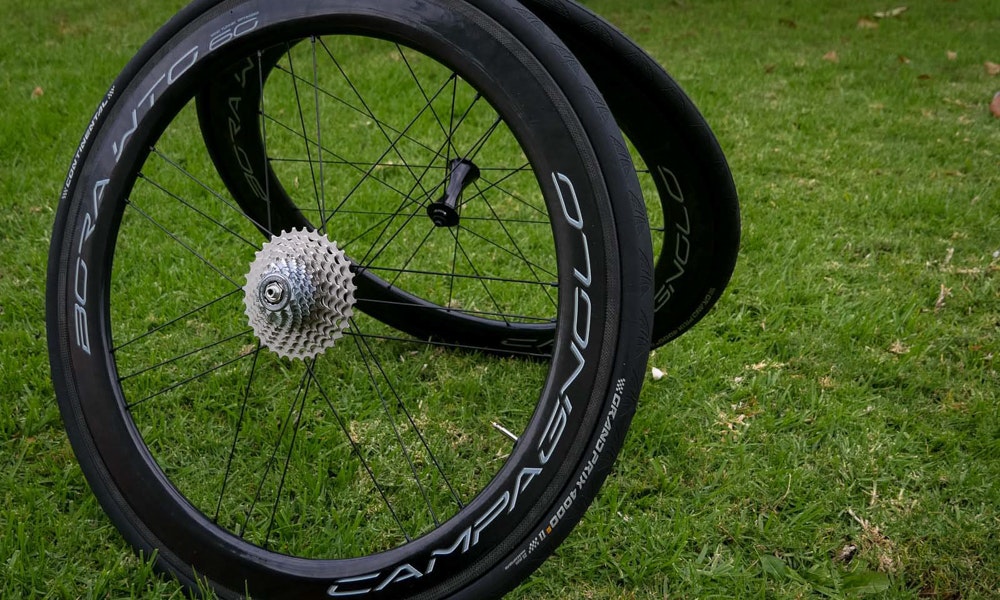 Also released with the new groupsets were the new Bora WTO (Wind Tunnel Optimised) wheelsets. As is the tradition for new aero wheelsets, Campagnolo have stated that the new Bora WTO 60 is the fastest wheel in its class. Aero claims aside, with a claimed weight of just 1,540 grams for a pair, the Bora WTO 60 is also impressively light. The Bora WTO 77, a 77mm deep front wheel that is intended to be used with a disc-rear, is said to provide ever better aero performance than its shallower stablemates.

Interestingly, the Bora WTO wheelset and WTO 77 are clincher/tubeless-ready only. Campagnolo claims that this move was taken as a result of tests proving that tubeless and clincher tyres offered up lower rolling resistance than tubular tyres.

Campagnolo expects both new groupsets to be available online internationally by mid-May with some reports suggesting that rim brake groupsets will be available any day now.

After more information on the inner workings of your road bikes drivetrain? Check out our Ultimate Guide to Road Bike Groupsets for more