Canyon at the Tour de France 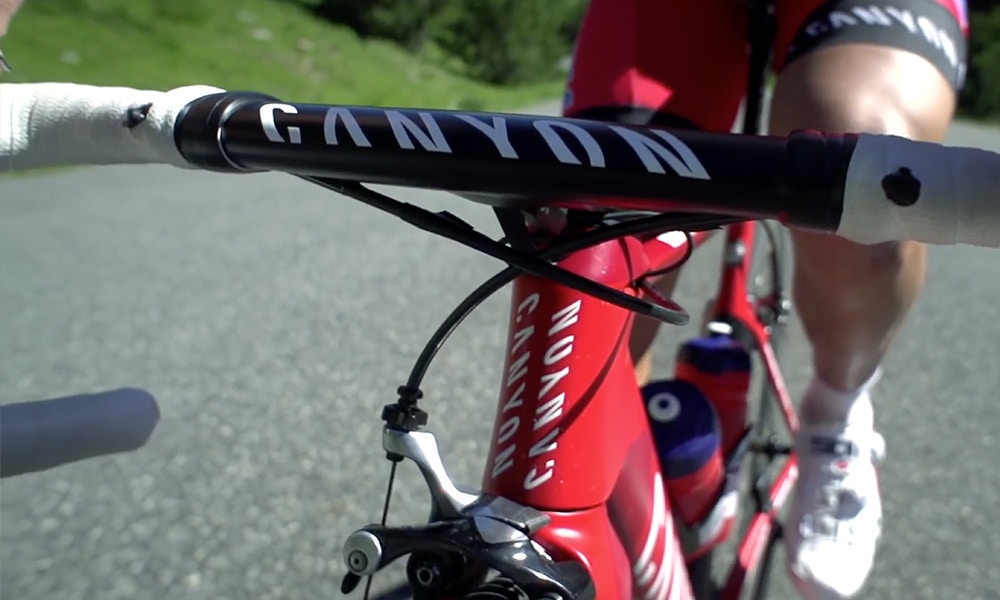 Canyon’s Aeroad is a pure performance machine. For the last three years it has reigned supreme on top of the Individual UCI World Tour rider rankings. The latest Aeroad, the CF SLX, has had a great start to 2015. Alexander Kristoff showed the versatility of this bike, taking his custom painted gold version to 11 victories in the early stages of the season including the Tour of Flanders. Valverde is also one to favour the CF SLX, the bike suiting his all-round riding skills. The whole frontal area has had a remake, the cockpit is now one unit maximising rigidity and handling whilst keeping weight down. Expect to see a lot of this bike from everyone on Katusha and Movistar. Tips for training your lactic system

The Canyon Ultimate CF SLX is the climbing option for Katusha and Movistar. The frame weighs in at 790grams, making it the lightest frame Canyon has ever produced. After the complete build is done it sits well below the legal 6.8kg limit, so the teams will have to be creative with their additions to ensure it makes weight. Ilnur Zakarin used the Ultimate CF SLX during the mountain stages of the Giro and also with great success winning the Tour of Romandie earlier in the year. The 58kg Columbian, Nairo Quintana also rode the Ultimate to victory at the 2014 Giro d’Italia. Those results speak volumes of the bike’s prowess in the high country. Innovative seatstay positioning makes for a more comfortable ride, essential after three weeks of riding. What is life like after the Pro Peloton? We caught up with Allan Davis to find out

The Canyon Speedmax CF has undergone extensive wind tunnel testing to refine the frame shape and design. Trident tube profiles now make for a very aerodynamic offering, regardless of the speed or wind direction. Integration is key with time trial bikes, and the Speedmax CF is no exception; no visible cables and one of the cleanest front ends makes this bike a key player in Movistar’s attempt to put Quintana into the yellow jersey. Thanks to Graham Watson for the great images.