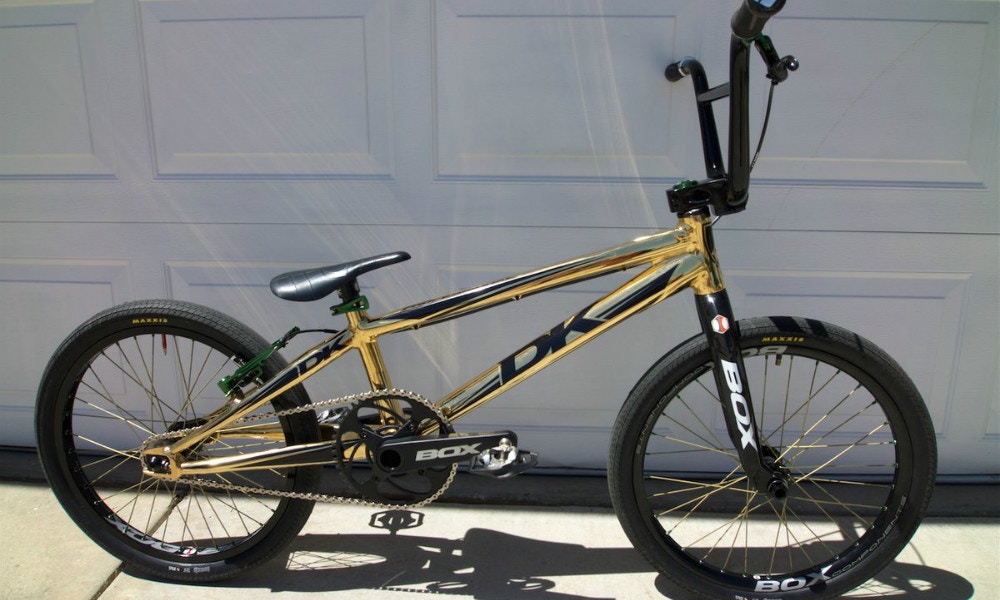 In 2016 Caroline Buchanan will represent Australia at the Rio Olympics in the BMX event, hoping to make amends after her fifth place finish in London 2012. Caroline entered London as the BMX world time trial champ and posted the fastest time in the timed seeding run, but wasn't able to produce that form in the final. There's no doubt the fire burns deep within Caroline to atone for that in Rio.

To help Caroline with her mission, DK Bicycles have produced a one-of-a-kind custom gold chrome plated bike. We take you through the details of the unique bike and check in with the cycling star. Between her busy travels, we managed to speak to Caroline about her rather special-looking race bike. Beyond the paint, Caroline tells that it's much the same set up that she's been racing on for the past three years. Excluding the green and gold Rio treatment, there are two special component choices that aren't exactly noticeable.

Despite the close quarter racing and enormous jumps the riders tackle, the pedalling aspect is equally as important to glory. Despite her 5' 5" stature, Caroline's peak output power has been recorded at 1365 watts, while her top recorded cadence sits at a staggering 265rpm. With such demands, every BMX racer wants to be locked into the pedals, much like a track racer does. Answering this, Shimano has created a small batch of SPD clipless pedals specifically for its athletes going to Rio. From a distance they look much like a Shimano XTR Trail pedal, but Caroline tells that she's just about fully locked in, with the pedals featuring less free float and the ability to only clip out by rotating the foot inwards.

The other trick part in hiding is Caroline's choice of inner tubes within the Maxxis Torch 1.75" race tyres. Here you'll find translucent plastic tubes made by Swiss company 'Eclipse'. These have long been a sneaky choice amongst weight weenie mountain bikers, sitting at about half the weight of a comparable-size butyl tube. In addition to the weight saved, tests have shown the plastic material to offer lower rolling resistance (they're faster rolling) than a rubber tube. Made in Switzerland, these tubes cost nearly AU$80 a piece. A fair price when you're chasing gold!

While we don't have an exact figure, we suspect Caroline's bike doesn't weight all that much – especially given that Olympic BMX racers are only allowed to use 20in wheels, a rear brake and one gear.

Will Caroline get a medal to match her bike? We’ll find out come August 20th. Frame Features: 20mm drop out w/tensioner blocks for both 3/8" and 20mm axles