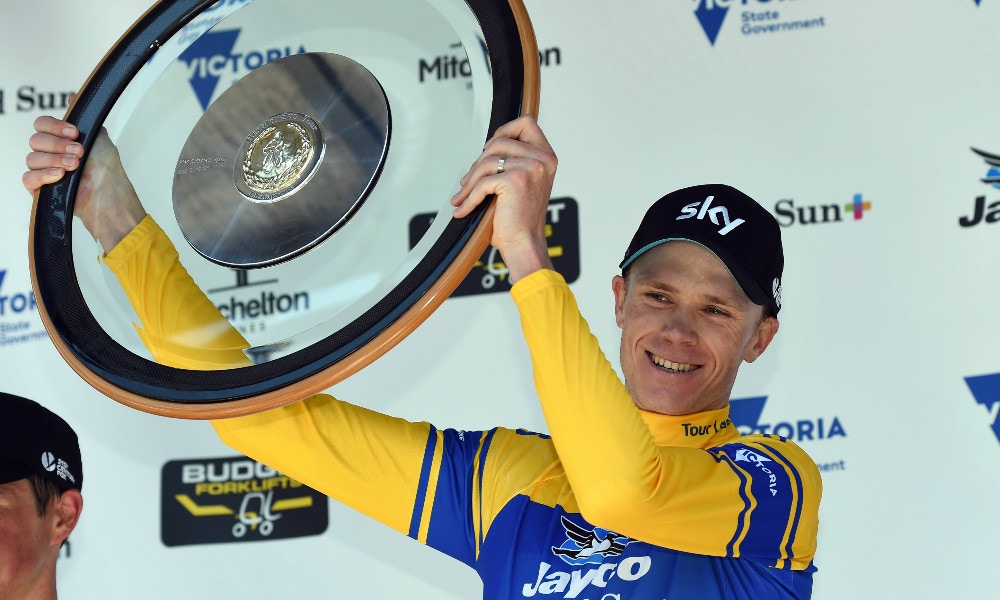 ARTHURS SEAT, Australia (CT) – Chris Froome (Sky) has won his first race of the 2016 season, taking out the Jayco Herald Sun Tour with an impressive solo move in the race’s final stage.

Froome came into the last of three ascents of Arthurs Seat with only Joe Cooper (Avanti IsoWhey) for company, the two having broken clear of the bunch on the previous ascent of the 3km climb. Froome left Cooper behind at the base of the bayside climb and rode to the top on his own, securing the stage win and the overall victory.

Damien Howson (Orica-GreenEdge) was second across the line after attacking from the bunch on the final climb, while Jonathan Clarke (UnitedHealthcare) was third, having followed Howson.

For Froome and his Sky team, the win completes a near-perfect race.

“We couldn’t have asked for a better week as a team,” Froome said. “With Pete [Kennaugh] kicking things off earlier on and going into the leader’s jersey, first and second on that stage, and then winning today’s final stage up Arthurs Seat — [it’s a] really really nice way to end off the week.

“Also to be first and second on the general classification … we really couldn’t ask for much more.” Froome hadn’t necessarily been planning to ride for himself on the stage, but that’s the direction the team headed in as the race progressed.

“It was something that unfolded out on the road when I went for the king of the mountain points the second time up Arthurs Seat,” Froome explained. “The team behind said ‘Listen Chris, just sit on the wheel — we’re not going to ride behind; you’re in a great position to go for the stage win and the overall victory’ and Pete would bring it up from behind.

“Massive thank you to Pete and the rest of the team for giving me the all-clear there to go for that.”

Overnight leader Peter Kennaugh (Sky) finished seventh on the final stage and second overall. While the Manxman was disappointed not to take the overall win for himself, that frustration was tempered by his team’s success.

“[I’m a] bit gutted not to win but then Froomey won and he was strongest probably throughout the race anyway so he deserves to win. I’m really happy with my stage win at the start, and the way I’ve started my season.

“Coming into the race we said it was possible to get a one-two … Froomey was the leader, I was the backup GC, and although those roles changed a bit in the early part of the race, it finished in a perfect way.”

After an aggressive start in the fast opening kilometres, it took most of 20km for the day’s first breakaway to get clear. Stage 2 winner Caleb Ewan (Orica-GreenEdge) was joined by Fumi Beppu (Trek-Segafredo), Pat Shaw (Avanti IsoWhey) and points classification leader Ben Hill (Attaque Team Gusto) as the quartet built an advantage that peaked at 2:20 after 30km of racing.

With the Japanese rider out front on his own, there was a shuffle in the chase group, with Ewan and Shaw dropping back to the peloton, and Christian Meier (Orica-GreenEdge) and Travis Meyer (Drapac) taking their places.

Beppu was soon caught by Hill, Meier and Meyer but with 71km completed, and the first of three ascents of Arthurs Seat approaching, Sky started to apply more pressure at the front of the peloton.

The race was all together again at the start of the Arthurs Seat climb with 86km completed and 36km still to race. Sky had a line of five riders on the front of the bunch with Salvatore Puccio setting an uncomfortable tempo.

At the top of the climb, KOM leader Chris Harper (State of Matter MAAP) and Chris Froome emerged from the bunch to contest the KOM sprint. Froome put in a short dig to move back into the lead in that classification.

As the riders began two laps of a 16km finishing circuit, Sky continued to lead the bunch, keeping a high tempo to dissuade anyone from getting away in the closing kilometres. The British WorldTour team continued to set the pace on the second ascent of Arthurs Seat with Ian Boswell setting a tempo that would thin down the peloton significantly.

Froome emerged from the bunch at the top once again, in search of more KOM points, and it was the former New Zealand national champion Joe Cooper that followed. Cooper attacked over the top and Froome responded, the pair opening up a gap of 30 seconds.

With overall leader Peter Kennaugh in the bunch behind, Froome wasn’t inclined to help Cooper with the pacemaking. He sat on the Kiwi’s wheel for the entirety of the final lap before punching away at the base of the Arthurs Seat climb with less than 3km to race. Damien Howson attacked from the peloton, catching and passing Joe Cooper, before Jonathan Clarke did the same and bridged across to Howson. Up ahead Froome was bolting to an impressive stage win and the overall victory. Howson left Clarke behind to finish second, leading in the remnants of the main field.

In addition to a stage win and the overall title, Chris Froome also leaves the race with victory in the KOM classification and the teams classification with his Sky teammates. Ben Hill wrapped up the points jersey after two days in the breakaway and Chris Hamilton was crowned the best young rider.