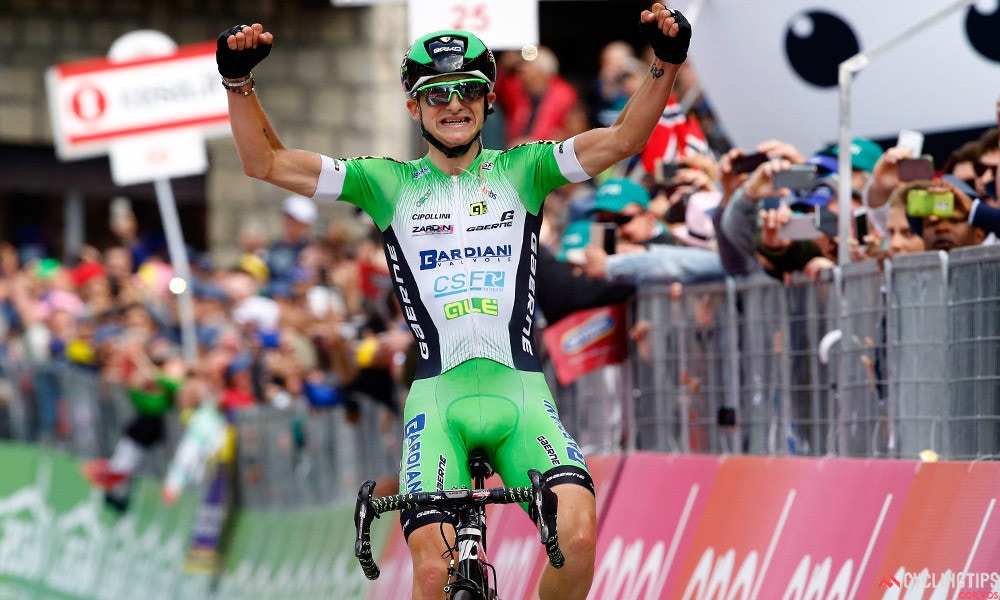 Italian rider Giulio Ciccone notched up the second home victory of this year’s Giro d’Italia on Tuesday, breaking clear on the descent before the final climb up to Sestola and soloing in well clear.

The Bardiani-CSF rider hit the line 42 seconds ahead of Ivan Rovny (Tinkoff) and one minute 20 up on Darwin Atapuma (BMC Racing Team), thus notching up the first Grand Tour stage win of his career.

Nate Brown (Cannondale) and Damiano Cunego (Nippo-Vini Fantini) were the other remainders of the day’s break, rolling in one minute 53 and two minutes four seconds back.

“Today is the best day of my life. It is a massive, massive emotion,” Ciccone enthused. “It is a great feeling. I can’t actually describe it, I don’t have any words. I would just like to thank everybody on my team for helping me on this important day.”

He was in the day’s break with team-mate Stefano Pirazzi and the two were able to work together to ensure the success. In fact, Pirazzi was responsible for Ciccone getting his decisive gap on the final descent; he got his line wrong on a corner and clashed shoulders with fellow breakaway rider Damiano Cunego (Nippo-Vini Fantini), causing the latter to have to run wide and brake.

The move looked more accidental than deliberate, and Cuengo later accepted that Ciccone was the strongest.

Once the gap was there Ciccone floored it, speeding downhill and then riding well on the uphill drag to the line.

He said that the team was in the race in order to chase stage wins, and would continue to do so. “Of course we won’t be happy with just one win. We are not going to rest on our laurels, we will continue to fight.”

Behind the battle for stage honours, an equally important fight was taking place. Race leader Gianluca Brambilla had been put under pressure by the other teams, losing contact on the category one Plan del Falco.

He fought back on the descent but with the rider in third place overall, Andrey Amador (Movistar) racing clear on that same downhill, Brambilla was asked to drive the pace on the final climb.

That meant that he was sacrificing his grip on the pink jersey but with Bob Jungels just one second back in second overall, the team could still retain the lead if Amador’s time gains were limited.

That’s how things played out, with the Costa Rican almost caught by the GC group before the line. Amador came in two minutes ten seconds back, just one second ahead of the Jungels group.

That result meant that Jungels was making history. He took the first pink jersey for Luxembourg since Charly Gaul in 1959, and ended the day in both that jersey and also the white jersey of best young rider.

“It is the first time in my life that I am in a leader’s jersey in a Grand Tour,” he smiled. “To get it in this way is very, very special. We showed great team spirit today. I owe this jersey to the whole team, that is the best way to put it.”

He was impressed by what Brambilla did. “It is unbelievable. I think cycling hasn’t seen this many times,” he said. “This was very special. I really think this shows the spirit of this team.

“I know that tomorrow I would do the same for him. As I said a few days ago, we are great friends. Yesterday I was glad that he kept the jersey in the TT, and now he worked for me and I got it.”

Brambilla was accepting of how things played out. Although he would have liked to have retained the Maglia Rosa, he saw the bigger picture.

“The team hasn’t lot the pink jersey so that is a very good day for us,” he said. “I am very happy. I am just sorry that I can’t take it back home to see my family. But I am pretty sure they will be there to see me.

“It was a tough day. My last job was to work for Bob. Of course, it was great to have Trentin and the others working for us earlier in the day, they probably had the hardest job.”

Following Sunday’s time trial and Monday’s rest day, the Giro d’Italia hit the mountains on stage 10 with a 219 kilometre race from Campi Bisenzio to Sestola. Warm weather greeted the riders, who embarked hoping that their legs would be ready for the early climbing.

After a fairly flat first 21 kilometres, the roads would pitch upwards on the category three Passo della Collina (km. 37.5). That would be followed by the similarly-ranked Pietracolora, then, in the latter half of the stage, undulating roads and two intermediate sprints before the category one Pian del Falco (km. 203) and the concluding third category climb to Sestola.

Stage eight winner Gianluca Brambilla donned the Maglia Rosa again thanks to a solid time trial on Sunday, but had just a one second lead over his Etixx-QuickStep team-mate Bob Jungels.

Australian champion Jack Bobridge (Trek-Segafredo) was an early attacker but his move was hauled back. Giovanni Visconti and Fancesco Bongiorno then jumped away on the climb, but bigger news was unfolding behind. Team Sky leader Mikel Landa cracked and was quickly losing time. He continued to slip backwards after the summit, his Giro hopes in ruins.

Visconti was clear alone and took top points on the climb. Tim Wellens (Lotto Soudal) went over second, just over ten seconds back, but missed out on a counter by Nicola Boem (Bardiani-CSF) and Przemysaw Niemiec (Lampre-Merida), which was able to get across to the leader.

That trio built a lead of over a minute while, much further back, Landa was over six minutes behind and bidding farewell to his Giro chances.

They would soon be joined by Nate Brown (Cannondale) Damiano Cunego (Nippo Vini Fantini), Egor Sillin (Katusha), Darwin Atapuma (BMC Racing Team) and Giulio Ciccone (Bardiani CSF). Of those, Pirazzi was the biggest threat to the Maglia Rosa, having started the just over four minutes back.

Landa was continuing to lose time and decided to give up, climbing into the team car.

With 90 kilometres remaining the chasers were just over a minute and a half behind the three leaders. Boem was weakening and soon lost his place out front, sliding back to the chase group. Visconti and Niemiec pressed on but were both caught with 70 kilometres left, making it a baker’s dozen in the lead.

Pirazzi had become the virtual Maglia Rosa and Boem knuckled down to try to help him. Behind, as expected, Brambilla’s Etixx-QuickStep team was chasing and they hacked the lead down to four and a half minutes with 50 kilometres left.

Prielder sensed opportunity and jumped away before the intermediate sprint, causing the break to fragment behind. He carried his lead onto the first category Pian del Falco where the chase group fragmented and then finally reformed with just under 20 kilometres left.

With 18.4 kilometres to go the Astana team hit the front and drove things for Nibali. At that point Preidler was 19 seconds ahead of the chasers and three minutes 37 up on the Maglia Rosa group. He was caught soon afterwards by the Cunego group, with the 2004 Giro winner leading that break as the road climbed upwards.

Pirazzi decided it was time to go and jumped with 17.5 kilometres left. However Cunego chased with Ciccone close behind, getting back up to him.

Behind, Michele Scarponi (Astana) was hammering at the front of the Maglia Rosa group and this pressure caused former race winner Ryder Hesjedal and current race leader Brambilla to slip backwards. However, with Bob Jungels still there, Etixx-QuickStep were covered.

Meanwhile, out front, Pirazzi was trying to get away but Cunego answered the move and then jumped briefly clear for the mountain points.

Ciccone pushed the pace on the descent, thinking of the stage win. Cunego was tracking him, but Pirazzi came up his inside and clashed shoulders, forcing the mountains leader to run wide and lose time. It was unclear if the move was intentional but, either way, Ciccone got a gap and pushed hard to try to stay clear.

The descent was catching out other riders too. In the GC contenders’ group, which had been whittled down by Astana, Kruijswijk got his line wrong on a tight left hand bend and carried straight on, colliding with Rafal Majka (Tinkoff). Fortunately, both managed to stay upright.

Race leader Brambilla was fighting hard and managed to get back up to the others on the descent. Andrey Amador (Movistar) was also going downhill very fast and had opened up a big gap on that group, seeking to gain time.

With 7.3 kilometres remaining Ciccone was over two minutes clear of the GC group, climbing alone towards the line. Ivan Rovny (Tinkoff) was riding well and had caught and dropped the other two chasers.

Further back, Brambilla was feeling better and was leading the GC group, with that decision implying that Etixx-QuickStep had told him to ride for Jungels.

Amador was continuing to ride well and was pushing hard towards the line. He had started the day just 31 seconds behind Jungels, and 32 off the race lead, and Etixx-QuickStep knew that his gains had to be limited. However, despite Brambilla’s work, Amador appeared to be pulling further ahead and was looking good.

With 2.3 kilometres on the clock for the leader, the Costa Rican was two minutes and ten seconds back. Crucially, though, he was almost a minute ahead of the Brambilla group and had become the race leader on the road. Teammate Visconti dropped back from the break to give him assistance in that goal.

Brambilla had given everything and sat up, exhausted. The Cannondale team had taken up the chase, then Astana came through. The general impression was disorganisation, though, playing further into Amador’s hands.

Out front, Ciccone came home to take his biggest career victory. He punched the air, showing great emotion, then rolled across the line. Rovny was next home, 42 seconds back, then Darwin Atapuma (BMC Racing Team) followed.

Further down the slopes Visconti was burying himself for Amador, driving the pace all the way to the final 50 metres, then being passed. However the Jungels/Nibali group had made a great recovery, and crossed the line just one second behind Amador.

That ensured that Jungels moved into the race lead, keeping the Maglia Rosa within the Etixx-QuickStep team for another day.