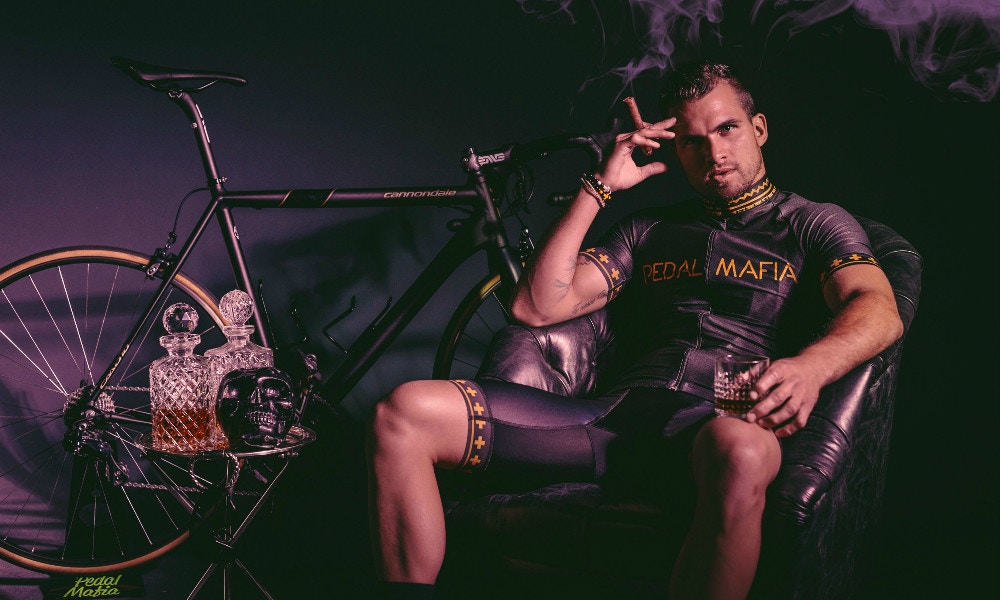 I’ve had dinner with the mafia.

Bear with me, I will get to the (cycling) point soon…

It was almost 20 years ago and it happened in Sicily, Italy. Granted they didn’t sit down around my sister and me with “I’m the mafia” tattooed to their forehead, but you’d have been an idiot to doubt their, err, authenticity.

So when I think of mafia, I don’t automatically think of protection racketeering, money laundering, trafficking and anything else that can pack a Hollywood script to the hilt. I actually think of at least ten really quite charming men in trench coats (yep) making sure my sister and I enjoyed an incredible meal, that we were staying in a safe hotel, and that we knew exactly where to go around Syracuse to make the most of the visit. I kid you not.

Which is why when I first heard the name Pedal Mafia I thought, you guys have nailed it.

Tight-knit, loyal, protective of one another, camaraderie, even family; the perfect name for a brand that’s trying to change the perception of cycling – one funky kit at a time. The man behind the mafia

Pedal Mafia came about because Jay Barron, then in his early-mid 20s, was spending way too much money on kit. Not only that, but he was sourcing most of it from the East coast given Perth at the time wasn’t giving him any sartorial satisfaction. Jay had always had a bit of a soft spot for fashion – he would never go as far as calling himself a fashionista, although he didn’t mind spending time looking at designs and checking out textiles. But he was getting doughnuts from most of his bike kit searching, so he did as any good style Mafioso would. He decided to get his own thing going.

That was four or five years ago and today Pedal Mafia is a global brand featured in 35 stores around the world – from Australia to the UK, Japan, Korea and the US. He also reckons he’s posted kit to every little nook and cranny on Earth, including to Afghanistan (which wasn’t even on the PayPal shipping list – that’s a whole other story).

It doesn’t throw style caution to the wind the way some other labels do, as though designing with Lycra in mind is a carte blanche for garish, look-at-me-look-at-me visual vomits. But it’s nowhere near conservative, either – it’s adventurous, but with taste. The hot pink retro US diner style neon light logo is fun – it’s a brand that isn’t afraid to play.

Inspiration for kit designs can come from anywhere. Jay’s cousins and a tattoo they all share have provided the creative seed for bird designs in early kit. The bird is a theme that has echoed throughout all three seasons so far and there’s no sign of it migrating from season four.
But it’s not all fun and games – well, not quite. As the Pedal Mafia cult has grown, so too has Jay’s desire to keep the brand all-inclusive, and to fly the flag for all that is great about cycling.

The cult of cycling – it can be one big, happy family

“Through Pedal Mafia I am trying to open the public’s eyes to the fact that cycling is fun, it does keep you fit and healthy, and you don’t have to be cool to fit in,” says Jay.

“I hope to encourage more people to discover that mindset and what it can achieve. And I really want to promote that it’s not just the coolest cats who cycle. It really is all-inclusive.”

Jay talks the talk and walks the walk. Once upon a time he would ride the latest and most expensive bike he could afford – these days he’s comfortable in the knowledge that his Giant Propel and Giant TCR are, in his opinion, pretty much the best value for money bikes going around.

The PM bunch rides also go a long way in promoting this feeling of a level playing field ‘famiglia’. From engineers to uni students, from blue collar workers to retirees, the bunch rides draw people from all professions, all ages, all classes – no distinctions are made and everyone just has the same quality, social ride.

There’s a few of these regular PM rides each week (see below) and just yesterday they had about 40 cyclists roll out, the youngest of whom was 16 years old and getting a spin in before school, and the eldest a 50 year old planning his early retirement. Jay loves the way diversity and disparity just levels out on the bike. He loves how it builds a bridge to better work/life balance and believes his own experience is testament to that.

“I used to play pretty high level footy but I was a bit down and out. I got into cycling and it quite literally changed my life. When I start my morning on the bike it calibrates the rest of my day in the best possible way. I’m in the right frame of mind from the get-go, and things just pan out well,” he explains. See also: Follow these kit rules and look the business

Being in the mafia ain’t no Sunday picnic

Jay’s not lushing around in a luxury yacht, sailing in the virtual spoils of in-demand kit. He’s still got his job working in websites in the automotive industry, but Pedal Mafia demands a lot of his time. A lot. From designing to running sales; from maintaining the website and stocktaking to packing and sending; from organising social rides to marketing; it’s pretty much a full-time job that Jay has to squeeze into part-time hours. He doesn’t think it will be too far down the line before the tipping point and he’s ‘forced’ to leave his day job and devote himself full-time to the ‘famiglia’.

Not that this is a bad thing – that’s his ultimate game plan and he’ll be thrilled when the time comes. But for now the clan has already grown – one of Jay’s best mate’s nieces who lives on the other side of the country has been freelancing as a graphics artist. They’ve not yet met but they’ve literally been on the phone to each other every day since she came on board, and their productive output has been huge. Jay’s also got people to help with stock packing and shipping.

Jay’s put everything into this. It’s not been a passion project to keep creative juices flowing – there’s too much at stake. There’s patents, capital investment, sizeable dips into savings. I suppose it’s a little like joining the mafia – not something you’d do lightly and not something you’d do without a solid long-term plan…! (OK, maybe I’ve taken the analogy too far).

But none of this has been done for financial incentives – in Jay’s mind you’d have to be mad to enter the fashion retail industry thinking you’ll hit a goldmine. It’s got to be one of the most competitive industries to break into, and shipping/ disparate sizing charts around the world/ big industry players etc just make it even more so.

This year Pedal Mafia has really hit its straps and now Jay’s talking to various cycling groups and charities. He sees these avenues as his next step towards that vision of demystifying and deconstructing any false perceptions of cycling that are out there in the greater public arena.

He’s also a man who clearly likes a lot on his plate – he’s aiming now to release four new seasons a year with an incredible ten designs each season.

There’s even a team car now. Or, in true Pedal Mafia style, we should say it’s a team truck. Jay found an old F250 that he’s pimped up, complete with customised bike racks. There are two Pedal Mafia teams now entered into the Tour of Margaret River, where the truck will be making its debut. Classic Pedal Mafia. In true PM form, everyone’s welcomed into the famiglia on these bunch rides. In fact just this week Jay welcomed a visitor from the US who was briefly in Perth and keen for a spin with the PM crew.

Thursdays – PM has teamed up with Uncle Joe’s barber shop/café for 50km river loop. Starts: Roll out from Uncle Joes, Subiaco, at 5.45am

Sundays – the first Sunday of every month sees a 110km Perth Hills ride at a civilised pace starting at 5.30am. All other Sundays return to the river for a 65km loop at a fairly tidy pace.

Starts: Roll out from Boulevard Hotel Floreat Forum at 5.30am for the hills session, and same place at 6.30am for the river loop.

Keep up with news, reviews, interviews and more - follows us on Facie or subscribe to our email