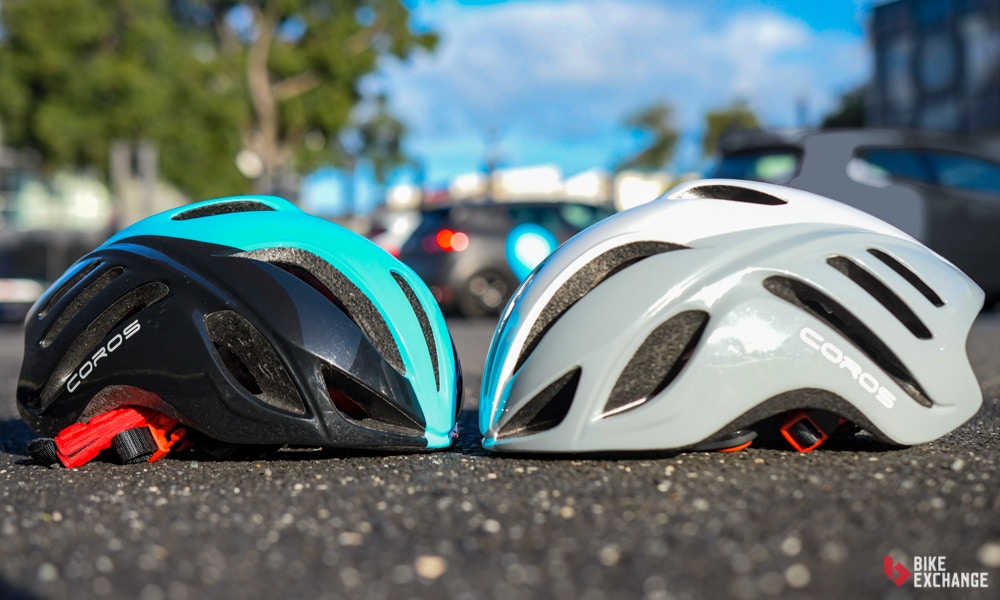 Wearable tech is everywhere in 2017, from smart watches to smart sunglasses, there appears to be no end to smartening up everyday sports products. The Coros Frontier Smart helmet is the latest bit in cycling to get the tech treatment.

The Frontier (named the Linx overseas) entered the market following a successful Kickstarter campaign in 2016. The brief for the helmet was simple, create a helmet with “open-ear precision audio so cyclists can safely hear traffic along with music, calls, nav, & ride data.”

When the samples for the test first arrived, I was skeptical as to why a helmet, fundamentally a safety device, needed the tech treatment. Over the course of three weeks testing the helmet and all of its features in a range of conditions, skepticism subsided and I soon began to understand exactly how such tech can be of benefit to riders.

Who’s it for?: Riders wanting a safe and effective way to stream music, listen to navigation commands and take voice calls whilst out riding.

More than a music device 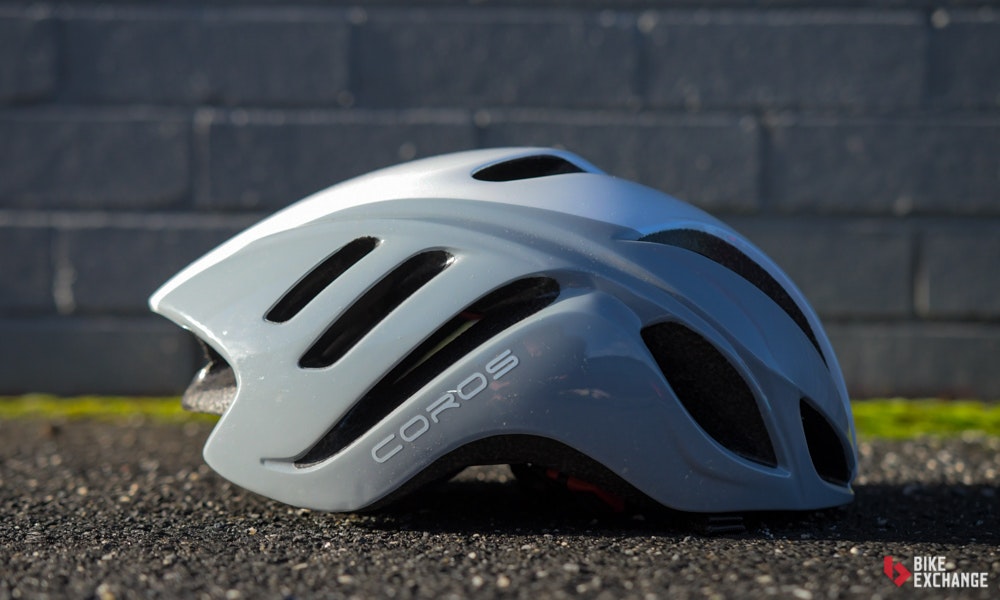 Being a smart product, there’s quite a bit of technical information to digest, understandable considering the expansive range of features the helmet boasts.

The major drawcard of the helmet is undoubtedly the ability for riders to listen to music and field calls whilst still being able to hear the ambient sounds around them. Coming from a musical background and having been a left-bud-in rider this was one aspect of the helmet I was most intrigued, impressed and then a little disappointed by.

Setting up the bone conduction speakers is a little bit of trial and error, but certainly, no strenuous task to undertake. The only requirement for the tech to work is that riders have the speakers positioned snug along the cheekbones, next to the ear. 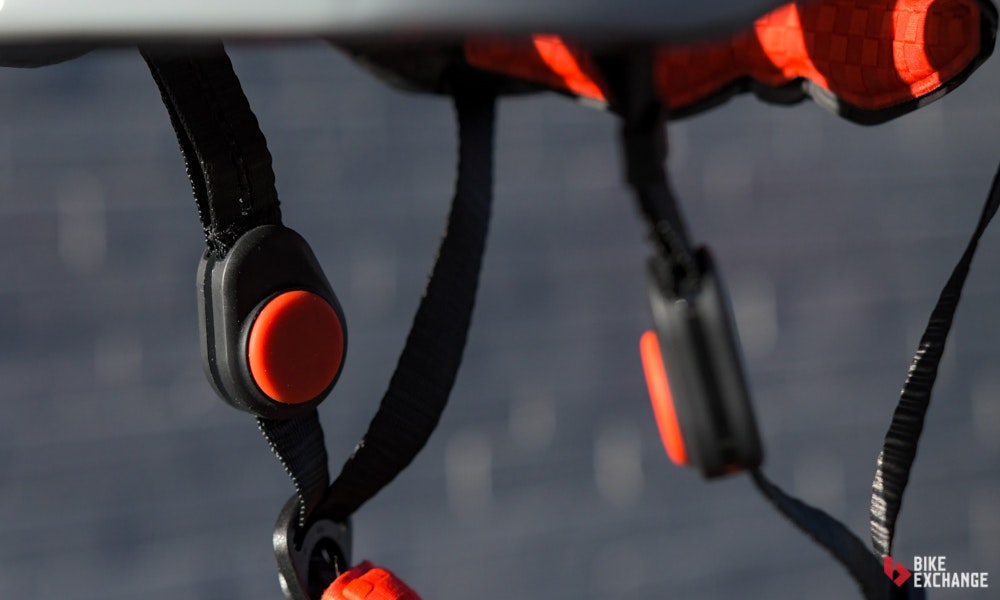 For those expecting precision audio, the sound quality on offer during music playback will likely be a letdown. High on treble and lacking bass resonance, the speakers, for me, lack the sound quality offered by a single bud. Music playback is fair when climbing or riding at reduced speeds, so shouldn't present too many issues for recreational cyclists and commuters, however riding at speed may present some issues.

The increased treble output of the speakers does have a silver lining, providing clarity when listening to spoken word podcasts, fielding phone calls or listening to navigational commands. It's this spoken word clarity that is the biggest winner of the Frontier for me. Especially given the recently updated legislation (VIC) regarding the use of phone and navigational devices when riding, whereby riders can be fined up to $476 for using a mobile phone whilst riding. The hands-free capability of the helmet ensures that rider's phones remain in jersey pockets, or affixed to the bike.

Going hand in hand with the spoken word optimised speakers is the wind resistant microphone located in the brow of the helmet. I took a few calls during the testing period and the person on the other end of the line had no trouble at all hearing me, and I had no trouble following the conversation. Ambient sounds around me during the phone conversation were unaffected, despite bombing down rollers with wind and vehicles rushing past during the calls. 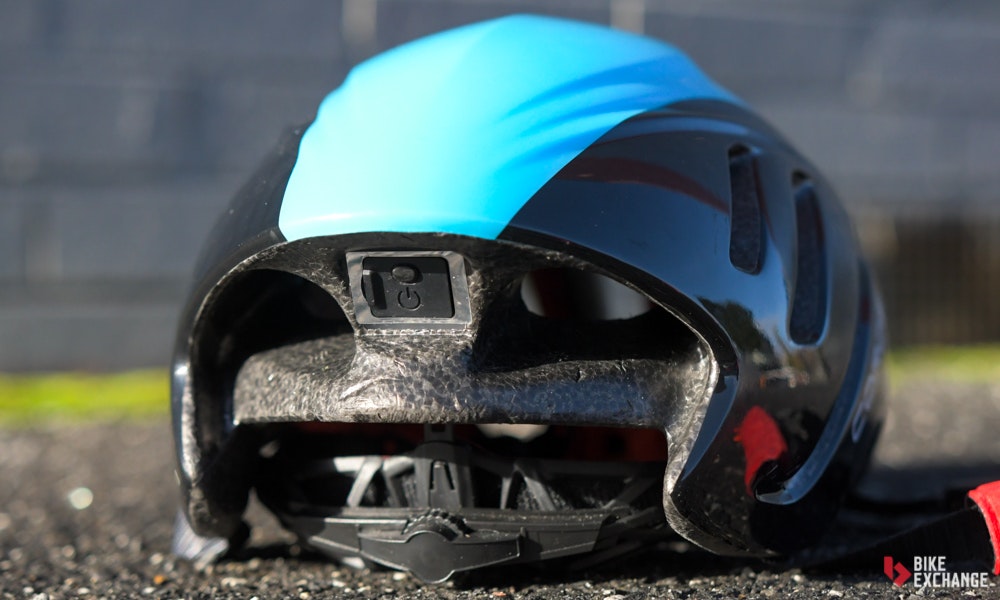 Battery life is another tick for the Frontier. Despite using the helmet for music playback and calls over the course of a number of weeks, riding roughly 8-10 hours per week only required a single recharge during the testing period.

The manufacturer claims a battery life of ten hours, however, this can easily be stretched out by limiting music playback and using the speakers solely for navigation prompts and intermittent phone calls.

Charging the unit is simple enough, with a single micro-USB port located at the rear of the helmet. A full charge from completely empty took roughly two hours.

There’s an App for that. 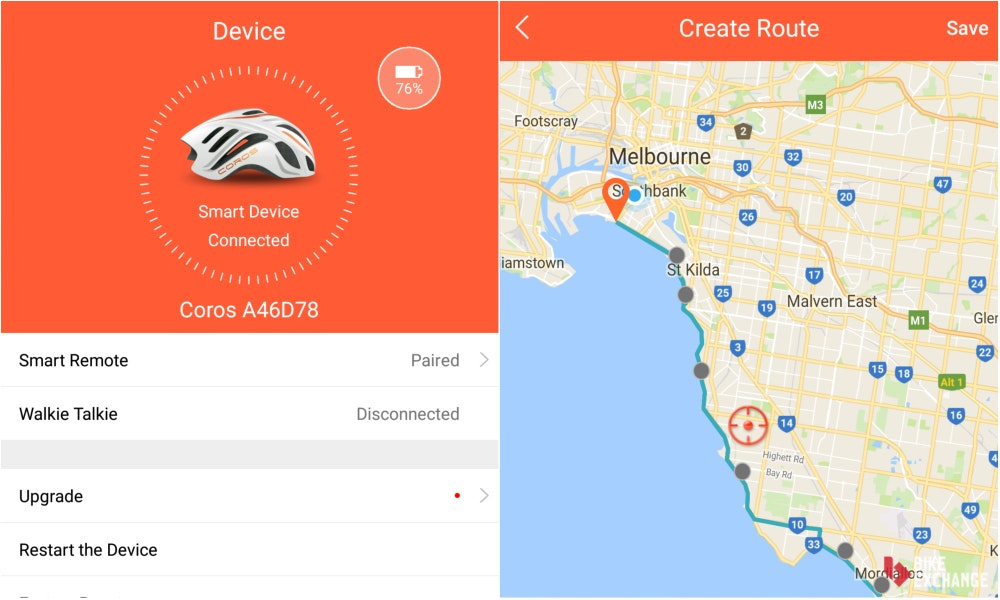 Following in the footsteps of other wearables, Coros have also developed a companion app that accompanies the Frontier/Linx family of helmets. The app has a number of functions including voice navigation, ride tracking and is also responsible for sending out the emergency alerts should you run into trouble out on a ride.

The emergency alert function works with the aid of a sensor embedded inside the helmet that senses when a rider has crashed by reading excessive g forces. From here, a message is sent to the nominated emergency contact with the GPS location of the incident, it's a concept very similar to that first seen with ICEdot, but obviously cleanly integrated out of sight. Whilst I wasn’t too keen on throwing myself off the bike for the sake of this review, it's comforting to know such a feature is there.

It must be said that the app itself is somewhat of a letdown. The route mapping function was clunky and frustrating to use and when tracking ride data and the app was a huge drain on battery life from my Android device, although it's worth noting that this doesn’t appear to be an issue on apple devices.

Third party navigational and ride tracking apps work seamlessly with the helmet in regards to prompts and on the fly feedback, Coros recommends using these apps, such as Google Maps and Strava for a more refined user experience. 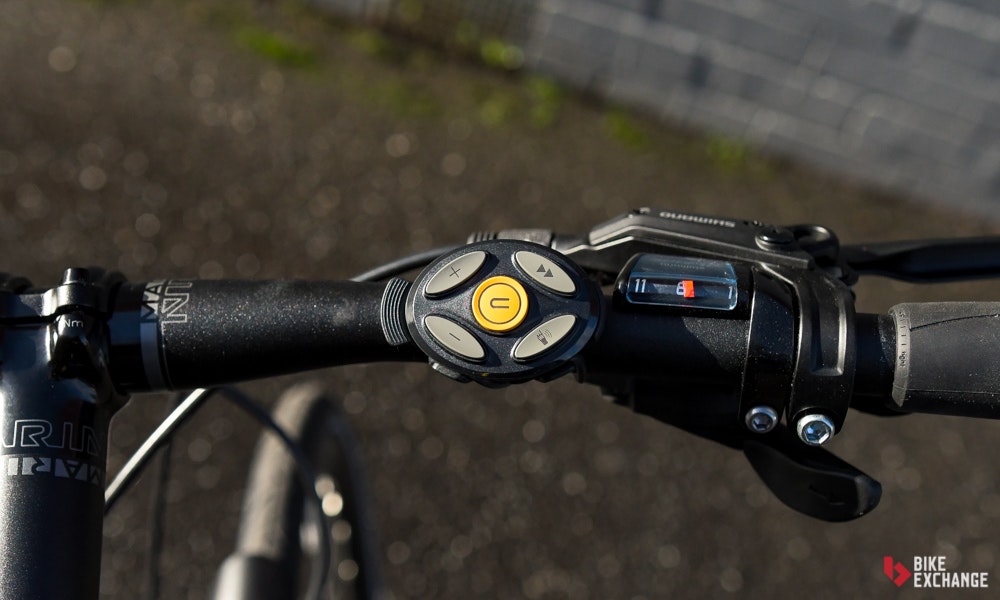 Interactivity with the helmet all occurs through the handlebar mounted controller. Featuring a simplistic design, the controller is easy to use and small enough to be almost unnoticed on the cockpit of my road bike.

The controller itself sits securely inside of a mount that is easily affixed to either the stem or handlebars with a couple of o-rings (supplied). The controller features five buttons, used for volume control (up and down), next song function, walkie talkie and pairing/phone call answering. 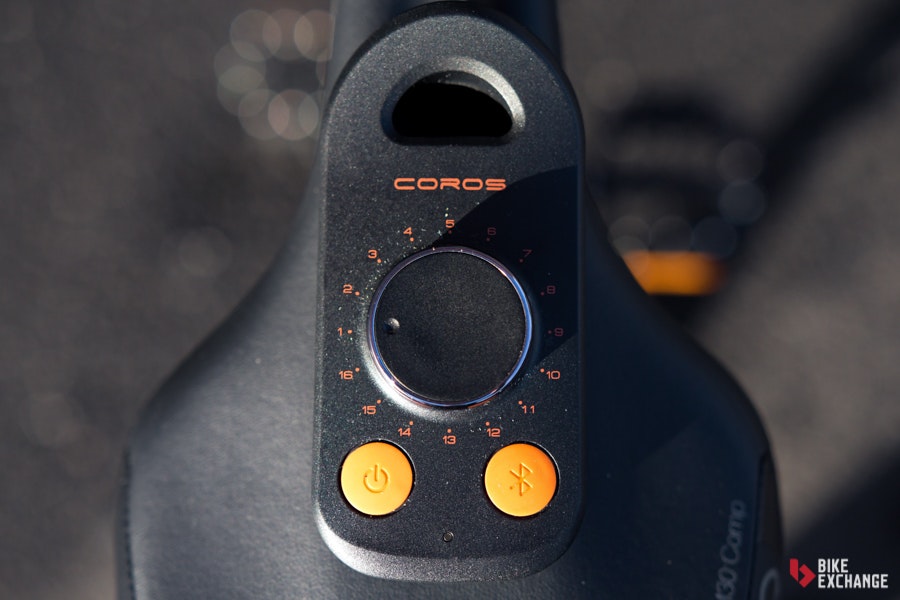 The walkie-talkie function is a unique feature of the Frontier, and one that could be of most benefit to those operating in the tour business. The Walkie Talkie (sold separately for AUD$59) functions with the aid of Bluetooth and allows two or more riders to communicate during a ride. The module itself is simple to use and simply requires all Coros wearing riders to be on the same channel, of which there are 16 available. Coros claim an operational range of around 500m for the walkie talkie units to interact with each other, something that should provide ample distance for large tour groups, or bunch rides.

The feature can be seen as gimmicky in a private sense, and will likely be unused by the majority of riders given it requires others near you to have the same tech. However, it's easy to see how the tech could be of benefit in a business sense. One such example is cycling tour companies, allowing a tour leader to explain landmarks, or convey information to a group of riders without the need to stop is an obvious advantage, allowing for a more engaging experience and safer ride. 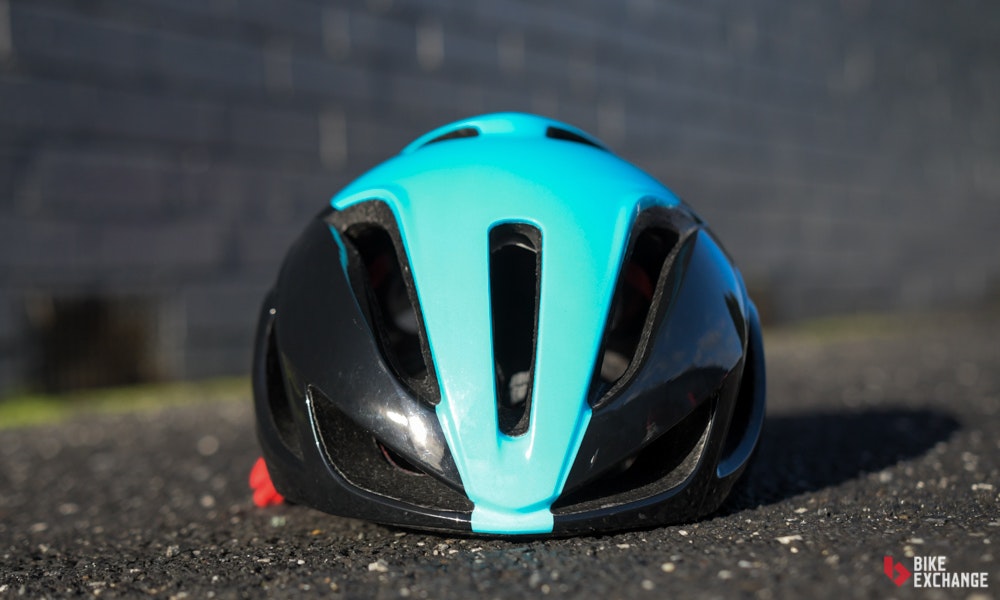 Whilst also a smart device, it’s important to acknowledge the Frontier for what it is – a helmet. So how does it stack up? Quite well actually!

Slide the Frontier out of the box, and it looks much like many other quality lids on the market today. Featuring a modern aero inspired design with ample ventilation, the Frontier has equal parts form and function.

Manufactured utilising a polycarbonate shell and EPS impact foam, the Frontier comfortably meets the benchmark AS/NZS 2063 safety standards. The Frontier is available in both Medium (54-58cm) and Large (57-61cm) sizes, so those with a particularly small head may not be privy to such smart tech. 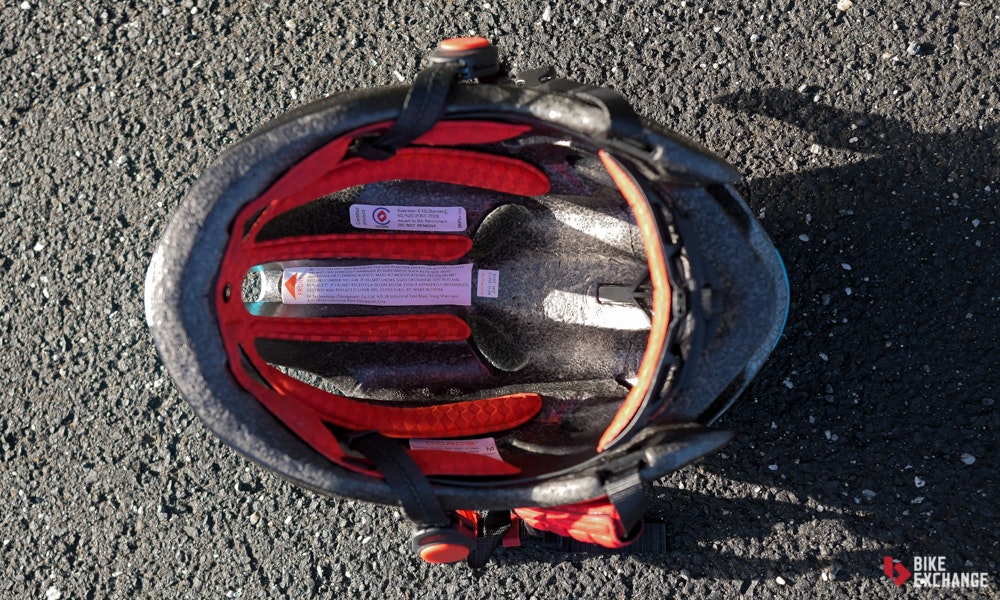 The helmets sent for review (Size M) fit the shape of my head easily, with little need to adjust the fit. The internal shape of the helmet is similar to other rounded, American brand helmets. There is additional padding included with the helmet, allowing you to customise the fit of the helmet, a big tick for those wanting a more dialled fit.

The helmet sat snug on my dome thanks to the retention system at the back of the helmet with no excessive movement when riding. One minor gripe is that the straps of the helmet can prove to be a minor annoyance, having a tendency to flap around whilst riding.

The downside of the tech laden Frontier and its long list of tech is seen on the scales. The samples sent for review (Size M) weighed in at 413 grams. Compare the Frontier to helmets of similar build and whilst heavier, the Frontier does manage to fair quite admirably in terms of weight.

It’s worth noting that having come from wearing a helmet that is roughly half the weight, granted my helmet is a near top of the line offering that costs more and doesn’t have any smart tech, the additional heft of Frontier was noticeable, particularly towards the rear of the helmet where the battery is located.

Given the wealth of smart features, build quality and aesthetics of the helmet, the Frontier is commendable in many ways, especially when you consider its affordable price tag. Such tech does come at the cost of additional weight to your head and another device you need to charge, but regardless of that, it’s easy to see the benefits that a smart helmet provides.

The Coros Frontier is available in Australia right now in a number of colours including Black/Blue, White/Grey, White/Red and Matte Black with an RRP of AUD$249

Thanks to IICO for providing the helmets for this test. IICO are the Australian Distributors of Coros Helmets, for more product information visit www.IICO.com.au