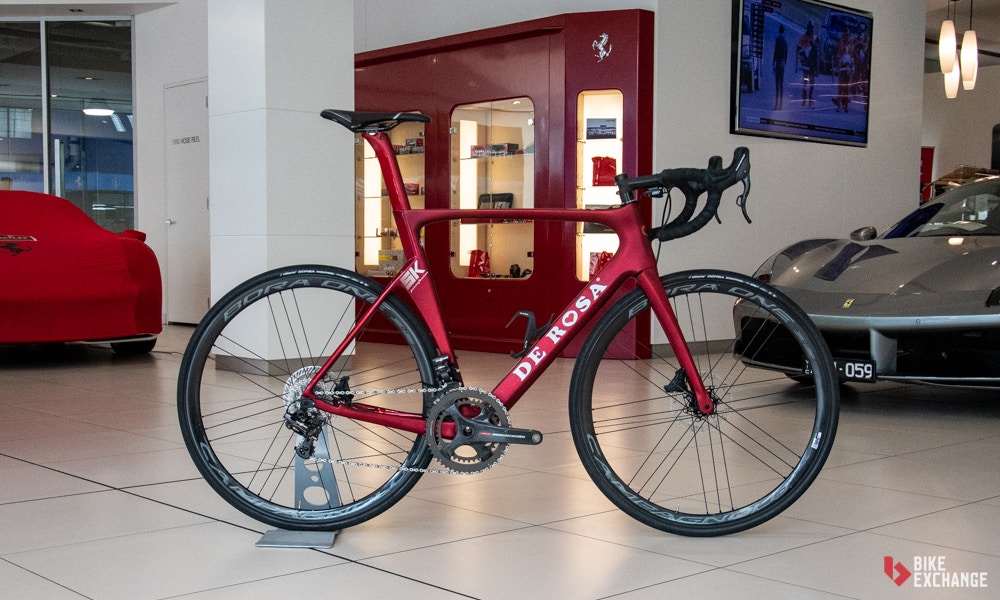 Oozing with heritage, tradition and a rich racing history, Italian bicycle manufacturer De Rosa has been focussed in producing race winning machines since 1953. In 2016, the Italian company teamed up with iconic design house, Pininfarina, the end result, the SK Pininfarina.

With De Rosa recently relaunching into Australia, we managed to get our hands on the Italian-made SK Pininfarina Disc and set about putting the premium road racing steed through its paces. As it turns out, this is one premium bike that offers a desirable blend of form and function.

Who’s It For?: Well-heeled cycling enthusiasts seeking an aero road bike with modern technology that combines comfort and speed with prestige and heritage.

What We Liked: The sleek supercar inspired lines, comfortable ride (for an aero bike), confident handling and the slick shifting groupset.

What We Didn’t: The stock narrow saddle and an eye-watering price tag.

Heart and Soul of the Brand 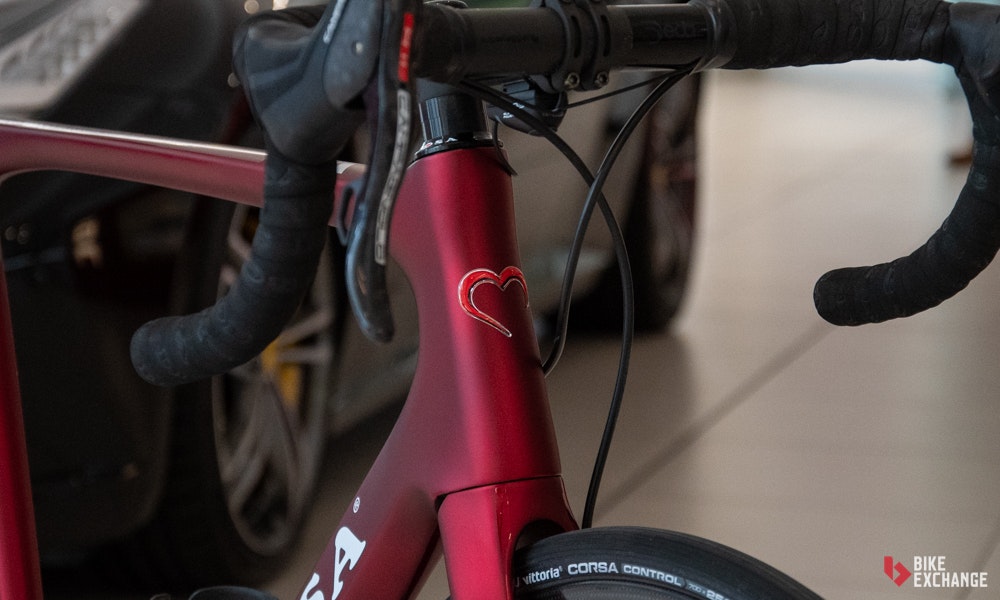 Having launched in the thick of the post-war Italian cycling revolution alongside the likes of Colnago and Cinelli, De Rosa has struggled in recent times to find its footing in the fast-paced modern cycling industry. However, rather than let it’s marketing department thrust De Rosa into the spotlight, the proud company chooses to let its products do the talking.

The company itself was established by amateur bike racer and engineer Ugo De Rosa in 1953. Over the next decade or so, De Rosas' became a fixture in the professional peloton, becoming the bike of choice for some of the sport’s icons such as Gianna Motta and Eddy Merckx.

Moving to the present day and De Rosa continues to build high-performance aluminium, carbon, steel and titanium road bikes both off the peg and made to measure. It’s this commitment to hand-made quality that has seen the resurgence of the brand in recent times.

A History of Stunning Design 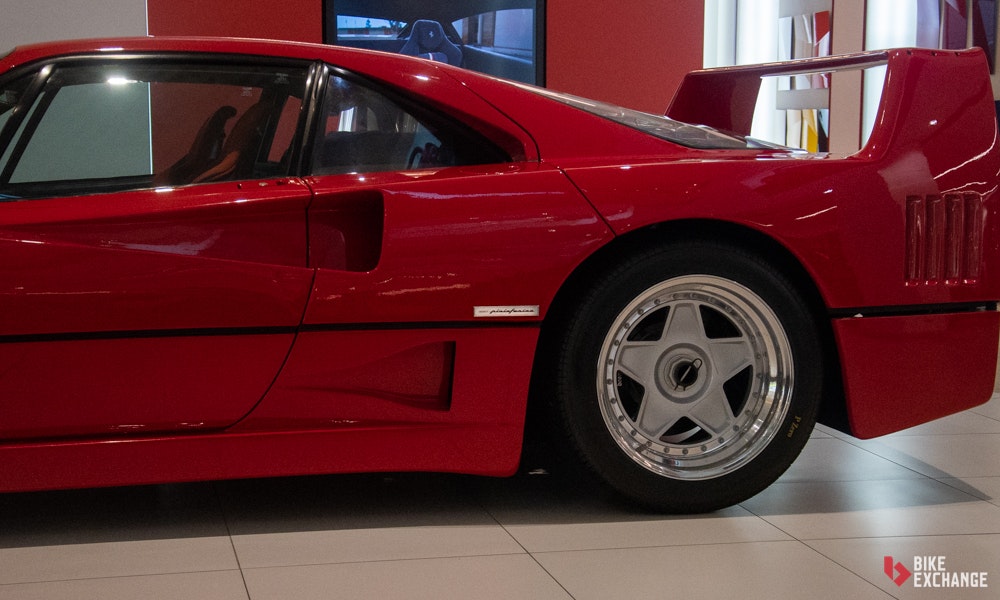 Pininfarina doesn’t just embody the supercar styling mantra, they wrote the book on it. Credited with the design of some of the world’s most desirable cars including the Alfa Romeo Giulia Spider and Ferrari’s Testarossa, F40, and the 458. It was this partnership with the prancing horse that thrust Pininfarina into the global spotlight.

More than just a marketing gimmick, Pininfarina played a large part in the wind-cheating design of the SK, with De Rosa making use of the design firm’s in-house wind tunnel when developing the swooping aesthetic of the bike. 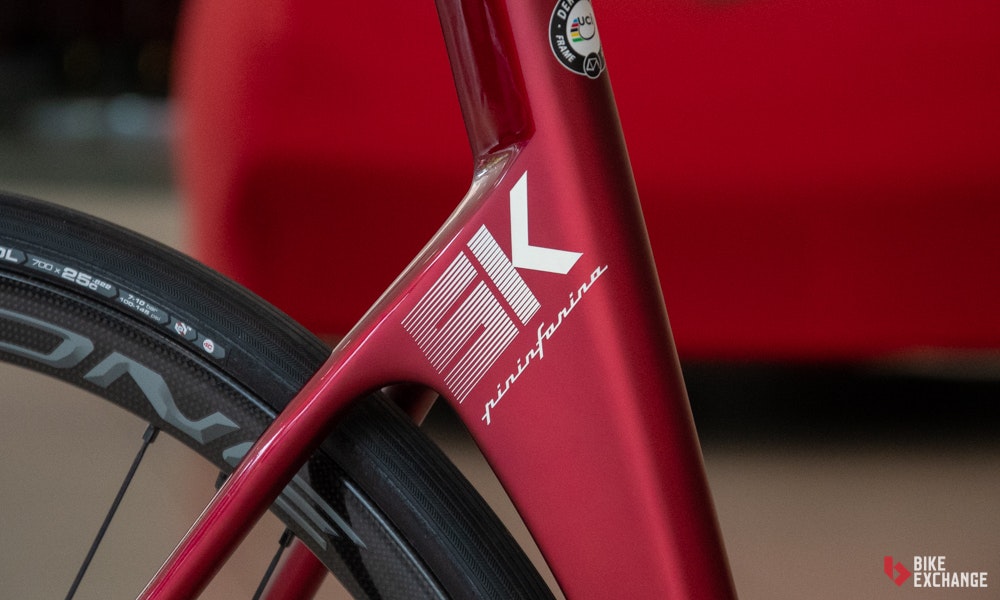 In a market where nearly all the big names have off-shored their manufacturing, De Rosa has gone against the grain and kept the production of its premium bikes, such as the SK Pininfarina, in-house. The frame and fork are made from a mix of 24, 30, 40, and 60-ton hi-modulus carbon fibre, each number depicting a different tensile. De Rosa says that the end result is a frame and fork package that’s stiff where it counts and supple where it matters, a claim I certainly back (more on that later).

Tipping the scales at a claimed weight of 990grams, the SK Pininfarina presents as a compelling candidate as a wind-cheating superbike. The swooping lines, hourglass headtube and modern aesthetic that come courtesy of Pininfarina are designed to make the bike as slippery as possible in the wind. 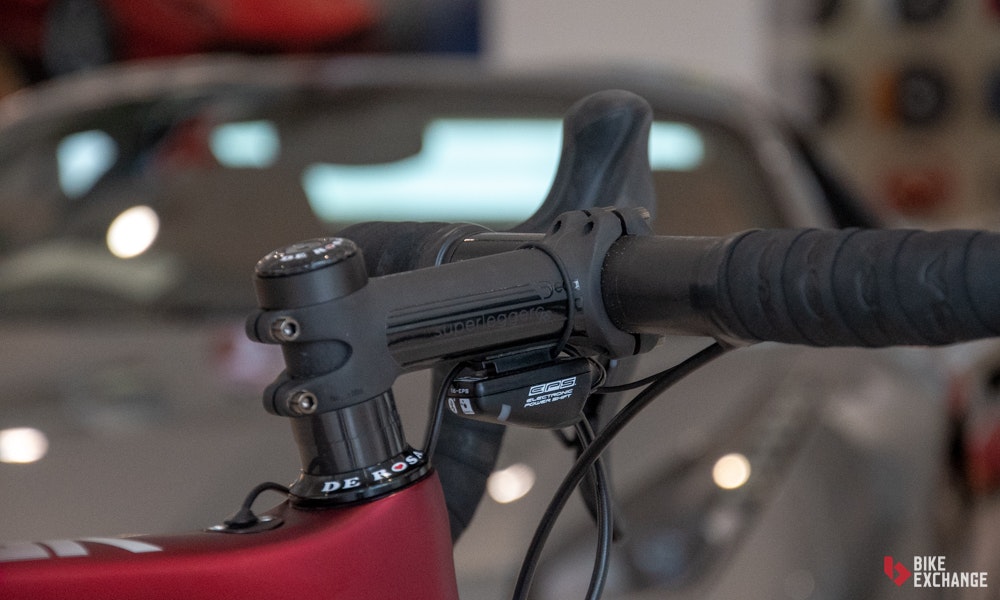 All cabling is semi-exposed at the bar before being internally routed through the frame. So it’s not quite as aero as something like a Specialized Venge, Trek Madone or the new Ridley Noah Fast, but it’s also far easier to make changes at the cockpit as a result.

Being in the aero race category, the geometry of the SK Pininfarina is best described as moderately aggressive, however, minor tweaks can transform the fit to be more upright. Available in eight sizes from 46cm through to 60cm, the tested 58cm featured a bespoke adjustable seatpost, a relatively tall 184mm headtube, 402mm chainstays and a relatively conservative reach and stack (for a race bike) of 399mm and 586mm respectively. 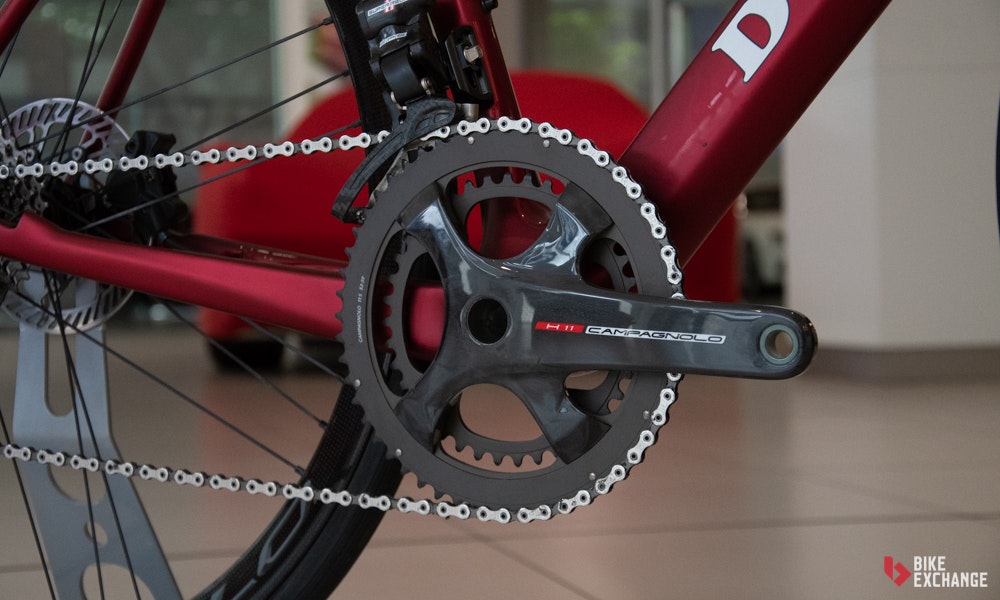 Firmly ensconced in the “superbike” category, our SK Pininfarina tester was outfitted with a high-end build kit to match its supercar styling. Being a proud Italian company, much in the same vein as the likes of Colnago and Bianchi, it would almost seem odd to see a bike of this heritage outfitted with anything but a Campagnolo groupset. It was fitting that our test steed was fitted out with a full Campagnolo Super Record EPS Disc groupset, indisputably the most luxurious (and expensive!) groupset on the market.

The rolling stock was another all-Italian affair, with the Campagnolo Bora One 35 DB wheels wrapped with Vittoria Corsa Control 25c tyres. Finishing off the full ‘tricolore’ build kit is a Deda Superleggera RS cockpit and Selle Italia SLR saddle. All told, our 58cm test bike tipped the scales at 7.69kg with cages but without pedals – A reasonable figure for a disc-equipped aero bike running electronic shifting. 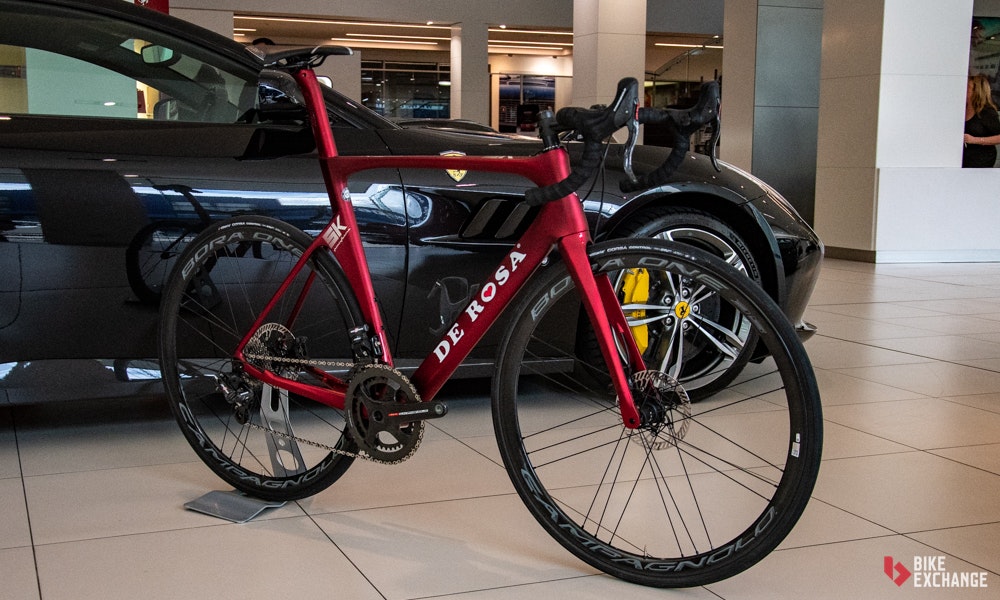 Standing for Super King, the SK Pininfarina (AU$5,895 for a frameset) is an evolution of the De Rosa’s much-revered “King” race bike. So for the maiden voyage on the steed, where better to take it than Melbourne’s Albert Park Formula One circuit. Straight from the showroom floor, I was impressed by how efficiently the bike rode over the smooth tarmac surface, urging me to go faster, get out of the saddle and dance on the pedals in haste.

Moving the bike to the coarse chip roads of my local Great Ocean Road area, however, was another story. Whilst the ride wasn’t ever what you’d call unbearable, the stiffness on offer from the aero-shaped seatpost, 86.5mm wide bottom bracket and Toblerone-shaped downtube induced an irritating amount of chatter from the road. Despite this, the bike isn’t uncomfortable, and I’d go as far to say that the SK Pininfarina is up there amongst the most compliant aero bikes I’ve ridden. This is a result of the carbon lay-up, which is designed to make the bike laterally stiff for immediate acceleration, yet not have a sting in its tail on long days in the saddle. 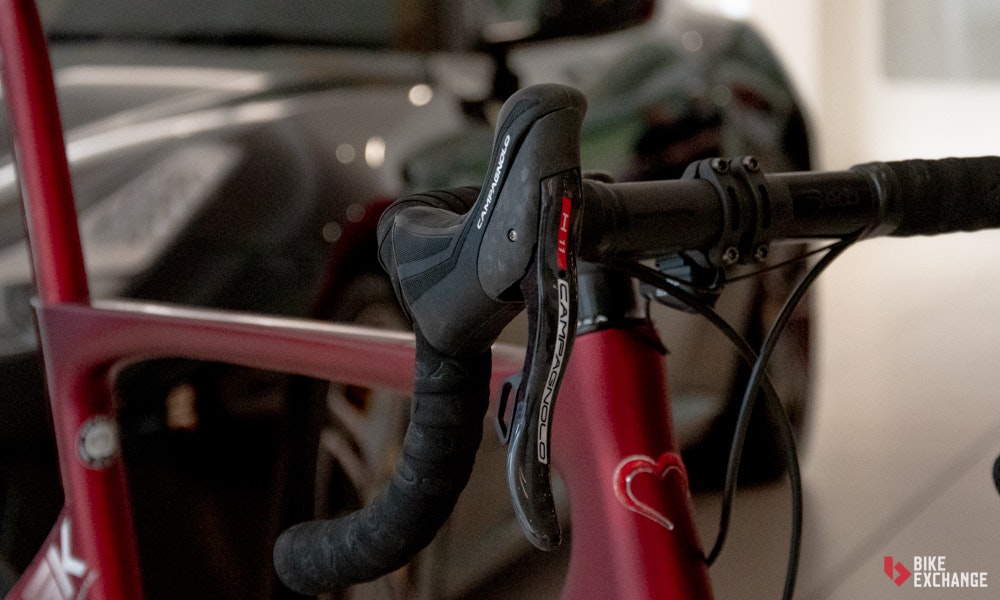 One trait that carried through the entire test period was the bike’s willingness to be ridden hard and fast. Whilst the stiff bottom bracket and 72.8º seat tube made for a machine that was adept on the slopes, the bike felt most at home effortlessly cruising along the false flats. At this price point, you’re splitting hairs when it comes to tangible differences between high-end aero bikes, and certainly, the SK felt every bit as fast as other bikes in its league.

There’s something consistent amongst the Italians, and they sure know how to make a great handling bike. Hunkered down in the drops, sitting on the top tube, or more relaxed on the hoods, it didn’t matter, the bike had confidence inspiring stability, regardless of what speed you hit on a descent. It’s not just a straight line hero either, the bike tracked confidently through corners, never feeling skittish or twitchy despite pushing my own limits of bike handling ability. Certainly, the disc brakes help, but so much of it is in the dialled frame angles and carbon lay-up. 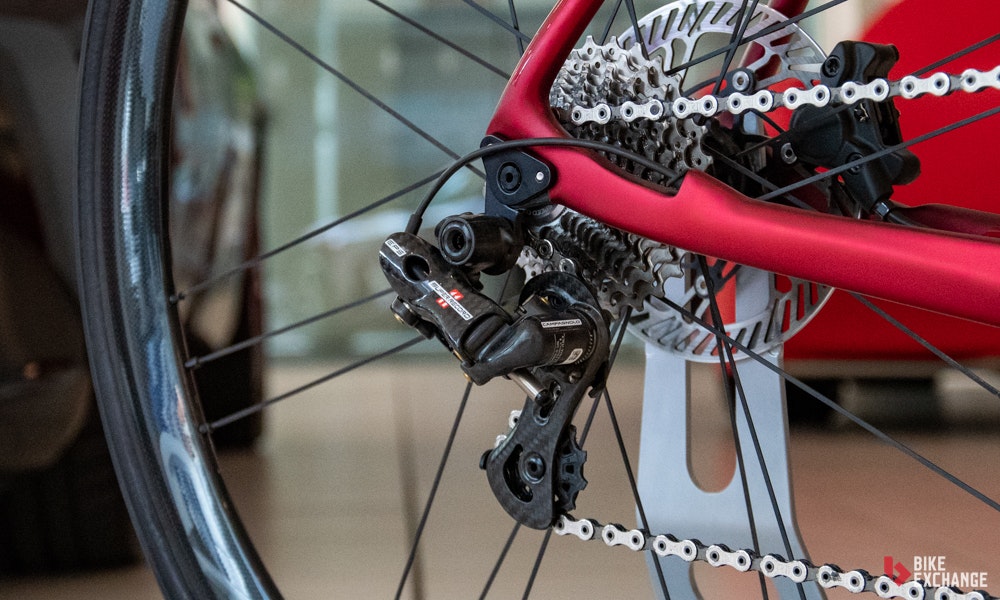 As a package, the SK Pininfarina was, as to be expected, well sorted. The Campagnolo SuperRecord EPS groupset was effortless in its function, never missing a shift throughout the entire testing period. The modulation and performance on offer from the hydraulic disc brakes was also an effortless affair, seldom leaving me wanting more bite or performance.

The cockpit took nothing away from the confident handling characteristics, with the compact shape of the drops suiting my ride style well. The Bora One 35mm wheels were plenty stiff enough and offer a fast feeling. As a matter of personal preference, I’d swap out the Vittoria Corsa Control rubber for something a little more supple and with better grip – it’s tough to beat the Continental GP4000. 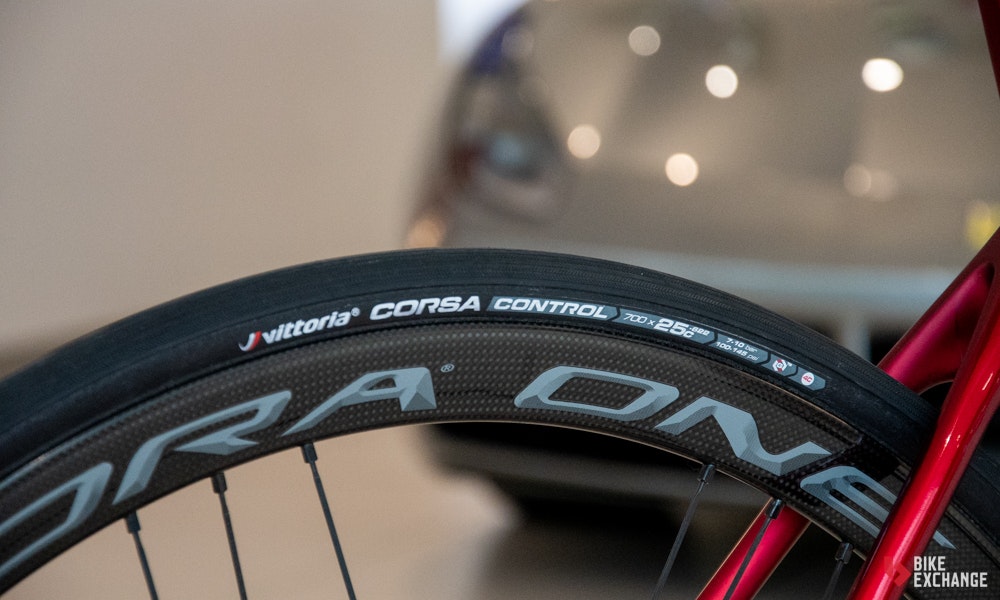 The only let down of the groupset were the levers themselves, a shame considering how revered the ergonomics on Campagnolo levers are. The hood shape worked for me, but I just didn’t get on with the location of the thumb shifters. Positioned, in my opinion, too far back on the lever itself. If you’re a lover of Campagnolo, this will go unnoticed, but I personally spend most of my time on Japanese shifting systems.

Another minor gripe was the Selle Italia SLR saddle. Designed with a flat and slightly rounded shape, my derriere never really got on with the narrow shape. However, saddle preference is as unique as music choice and this was easily rectified by swapping out the perch for something a little more to my liking. 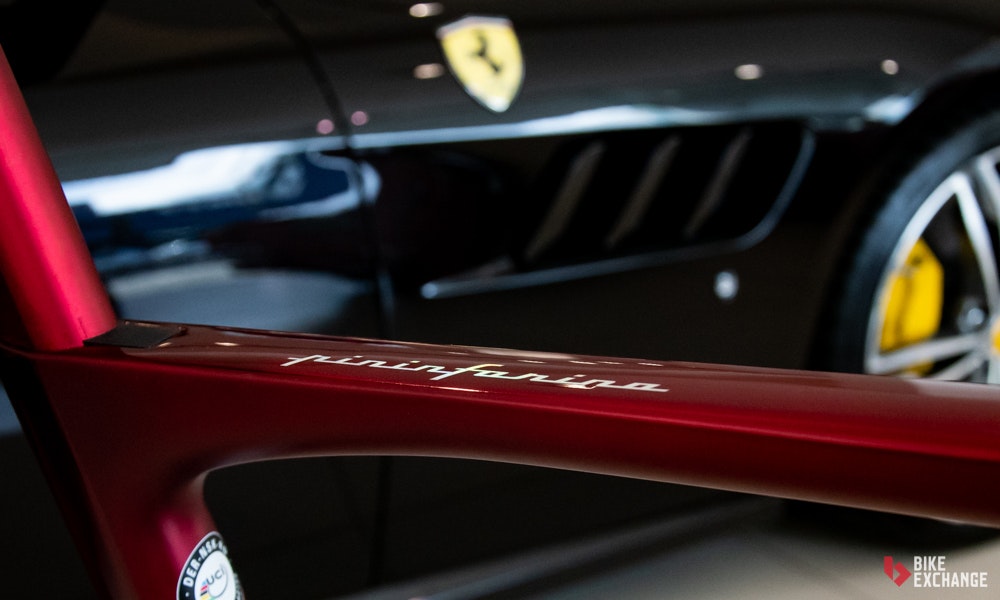 As a lover of the automotive world, the prospect of taking delivery of a freshly built Pininfarina designed race bike was a treat. Whilst the aesthetics of the SK Pininfarina proved to be quite polarizing within the BikeExchange offices, I was well and truly in the enamoured camp. The matte Rosso Vulcano paint job, highlighted by gloss accents of the same colour with pearlescent logos was truly something to behold in the sunlight and turned more than a few heads when parked up out front of the local coffee shops. The finish of the bike is to a level expected for a machine that retails for the considerable sum of AU$12,035. 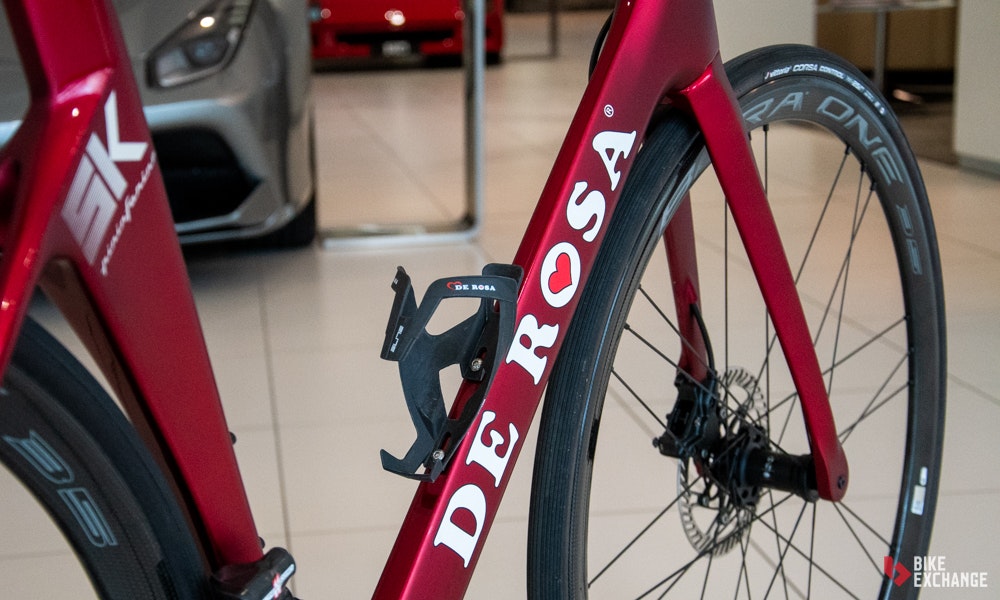 With elegant lines, aerodynamic efficiency, lightweight components and a price tag that’d make most people fall over, there’s little denying that the SK Pininfarina is anything other than high-end.

I’ll admit that I was originally dubious as to the Pininfarina connection, having marked it down in my mind as a marketing exercise. Having spent the last month riding around on the superbike, I can attest that this is one special machine. It may not be the fastest or the lightest tool that I’ve had in my shed, but the fact that I still chose to ride this bike over every other bike I have in my stable (some of which I love dearly) speaks volumes of the type of ride it provides.

So who is the SK Pininfarina best suited towards? Priced at the top-end of the market amongst other high-end and custom bikes, it’s best suited to an enthusiast that appreciates a ride that embodies true Italian style, passion and flair. If you’re a fan of all things Italian and are considering adding a bike to your stable that’s just that little bit special, the SK Pininfarina Disc is one bike worthy of the wish list.

Confused by the different categories of road bike on offer? Our Aero vs Enduranace vs Traditional Road Bike Comparison article is packed with all you need to know.