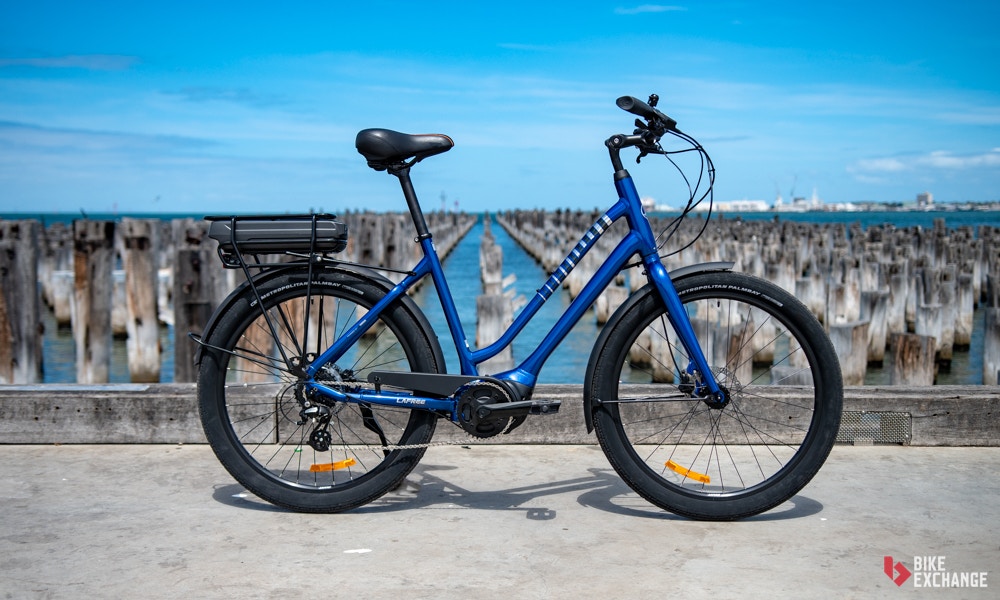 With the booming popularity of e-bikes, it should come as no great shock that some of the industry’s biggest players are taking what they’ve learned from the top-end of the market and putting that knowledge into great value e-bikes to suit first-time buyers.

When it comes to big industry players, there’s none larger than Giant, the world’s largest bicycle manufacturer. The Taiwanese juggernaut has long been known for its high-quality bikes at sensible prices, and so it makes sense that they are amongst the first key industry players to offer a quality mid-mounted pedelec e-bike at a fair price.

All-new for 2019, Giant unveiled the LaFree E+, a bike positioned as a uni-sex commuter for first-time e-bike buyers. We’ve spent the past month riding around on the LaFree E+ to get a sense for if it stacks up to the manufacturer’s claims of being an “invigorating and exciting” entry to the e-bike market.

A Frame to Suit All 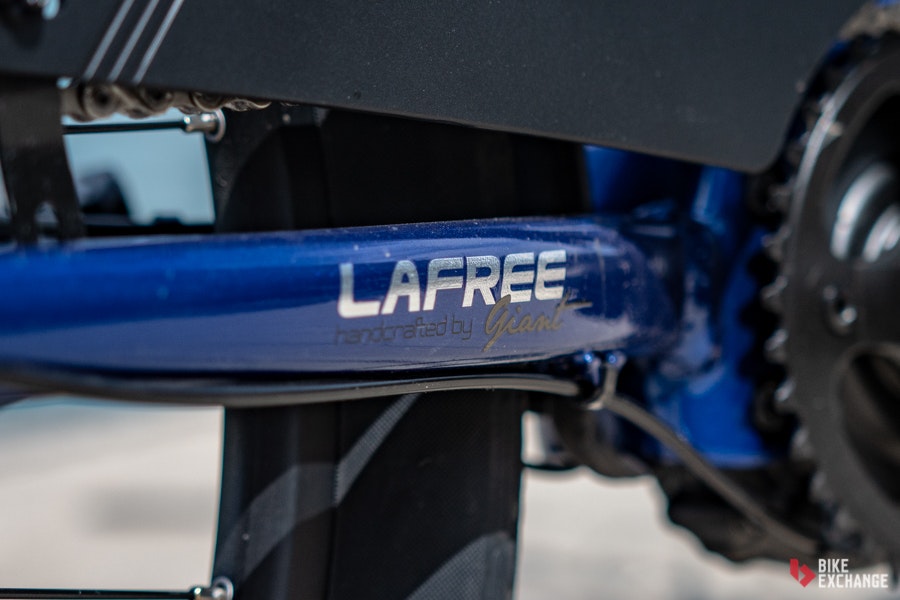 Marketed as an entry-level e-bike to suit riders of all abilities, the LaFree E+ 2 (AU$2,799) has a robust aluminium frame at its foundation. Offered only in a step-through configuration, there’s a clear sense that the folks over at Giant were aiming to make the LaFree E+ as accessible as possible.

With just three size options to choose from, the fit can only be described as comfort orientated. With an upright riding position, a long wheelbase, and the mid-mounted pedelec drive system, the LaFree E+ offers up cruising stability in spades.

The fit and finish of the frame are what has come to be expected from the world’s largest bicycle manufacturer, with quality welds, smooth lines and consistent paint. Our test bike is outfitted with a rigid aluminium fork, manufactured from the same ALUXX grade material as the frame. the lack of suspension wasn’t missed and serves the urban environment well.

Cabling at the front of the bike is largely exposed, however, the rear derailleur, rear hydraulic disc brake hoses and drive system control unit cabling are all internally routed through the downtube for a clean aesthetic.

All told, our large-sized test bike tips the scales at a hefty 24.9kg, a weight more palatable when you consider that includes the provided platform pedals, kickstand, racks and mudguards. 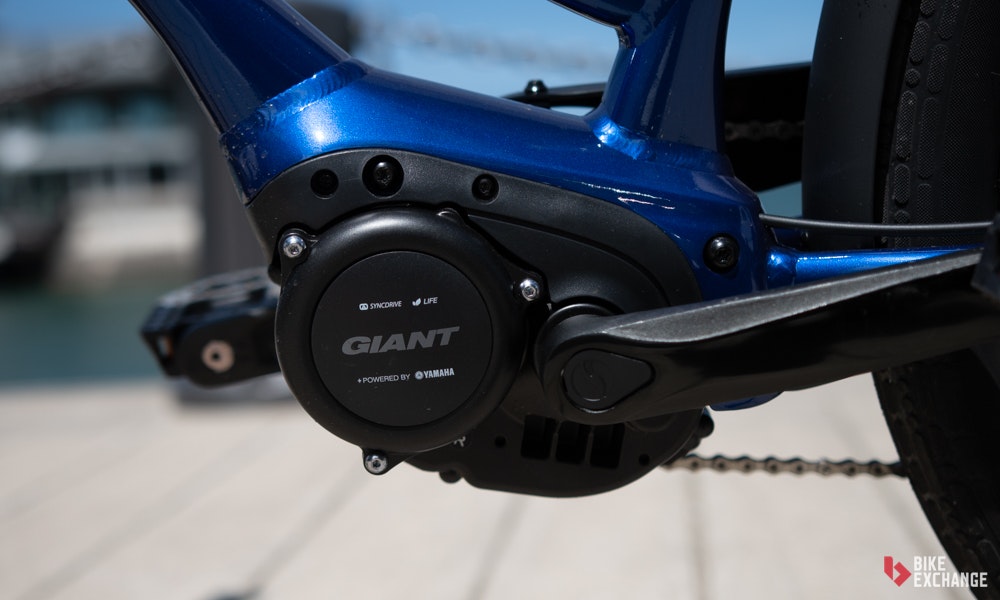 Occupying the same space as more premium budget e-bikes on the market, the LaFree E+ has a clear advantage over its competition largely thanks to the quality mid-mounted pedelec drive system fitted.

Designed and manufactured in collaboration with Yamaha, the SyncDrive Life drive system is all-new for 2019 and is optimised for use on e-bikes outfitted with low step-through frames. Delivering a maximum of 60Nm of torque, 250 watts of power and up to 300% assistance, the unit is well suited to this steed. Coupled with six assistance modes, you’ll be sure are to find a setting to suit.

In case you’re not keen on constantly flicking through assistance levels, the LaFree E+ is outfitted with an AUTO assistance mode that scales assistance from 50-300% of the output. Thanks to Giant’s own 6-SensorPlus technology, the drive unit offers torque, slope, cadence, speed, motor rotation sensors and an accelerometer to adjust the required assistance as necessary. 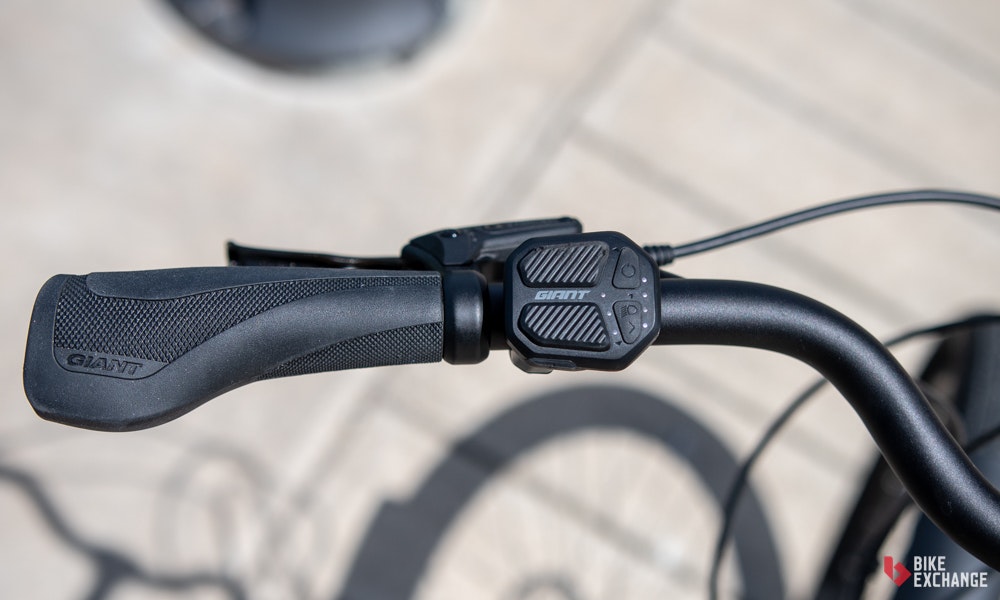 Giant’s own RideControl phone app provides basic information on assistance levels, remaining battery, range and allows for limited drive unit tuning capability. On the bike’s handlebars, a basic controller is outfitted with an on/off button, and two buttons to cycle through the assistance levels.

Acting as the fuel tank, Giant have outfitted the LaFree E+ with a 400Wh rack mounted battery. The battery unit is recharged via Giant’s own 3 amp EnergyPak charger that sees the LaFree E+ charged to a very usable 60% in approximately 90 minutes. The remaining 40% is trickle charged, with a full charge on our test bike taking a little under four hours from completely empty. 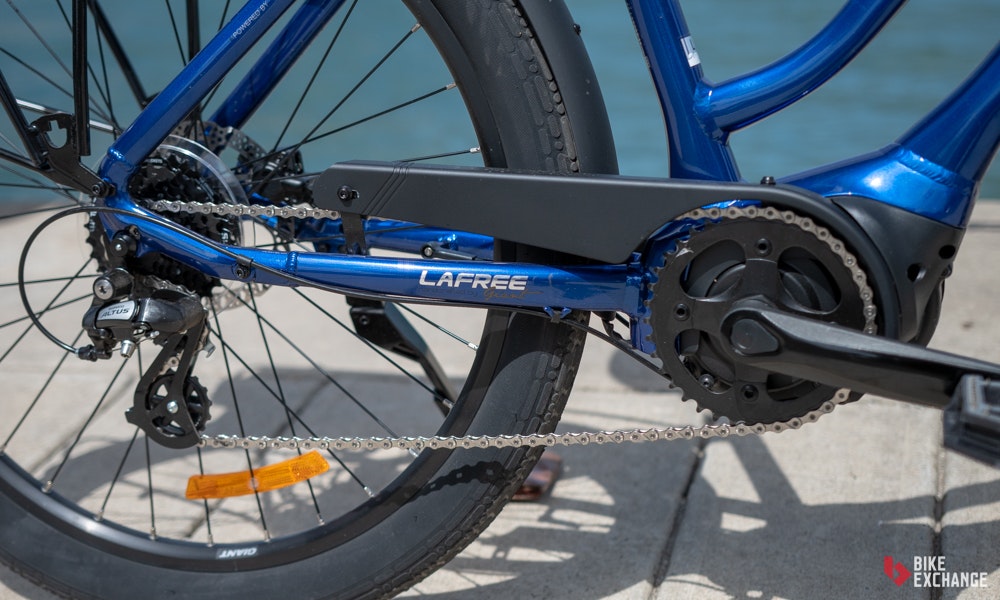 Priced at AU$2,799, the build kit found on the LaFree E+ 2 straddles the line between affordability and long-term durability. Shifting is a mixed affair, courtesy of Shimano. An eight-speed Altus rear derailleur, controlled by Acera shifters is matched with a single 38T chainring. A relatively narrow range 11-32T cassette out back offers up adequate range for the urban jungle, however, it may prove to be a little narrow for those wanting to explore hillier routes, and certainly, it’s not something you want to be left with if the battery runs dry. 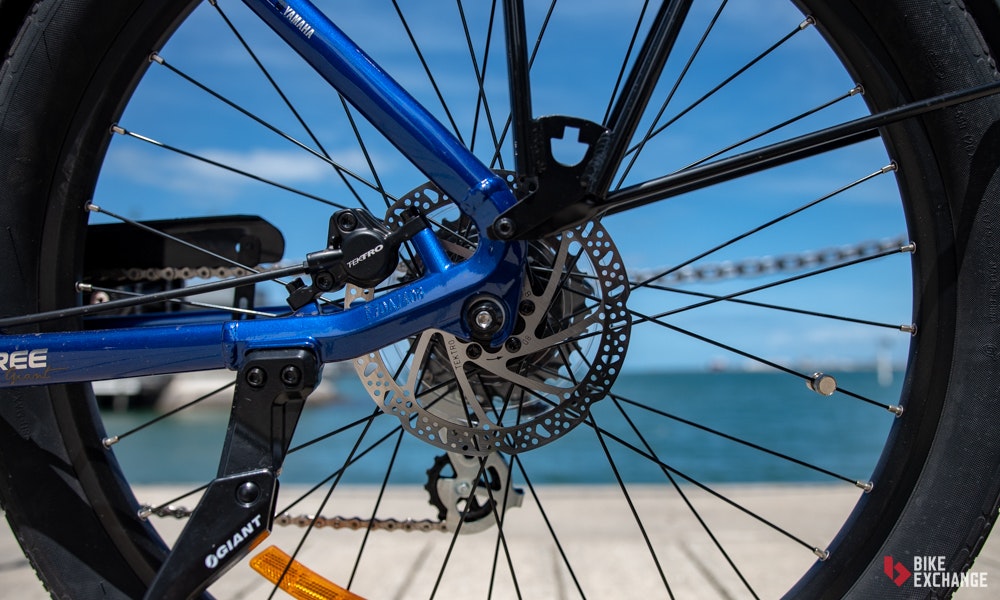 Elsewhere, the component specification is considered and well-suited to the urban environment the bike is destined to traverse. An aluminium rack out back handles the bulk of the load-lugging duties and is capable of hauling goods up to 25kg in weight. Mudguards front and rear also feature, shielding the rider from water spray and road grime whilst the uber plush saddle and contoured handlebar grips have an obvious emphasis on comfort. Really the only things missing are integrated front and rear lights. 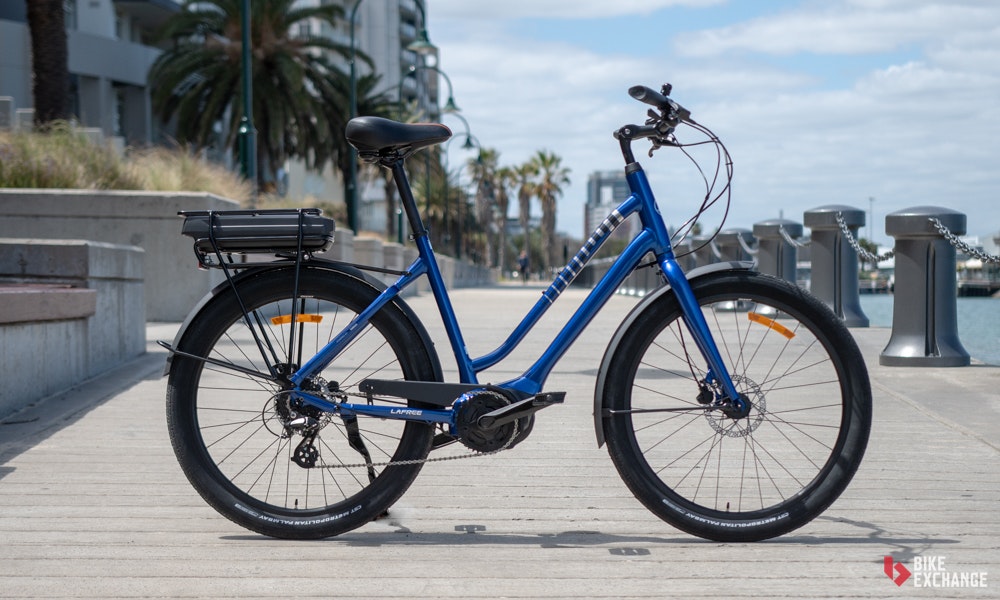 When the LaFree E+, along with a host of other new e-bikes, was announced a few months ago at the local Giant launch, we were immediately keen to get our mitts on the all-new urban steed. Having ridden a number of rival budget e-bikes recently, we were curious to see if the world’s largest bicycle manufacturer could indeed provide a suitable all-around package at an extremely competitive price point.

Since receiving it, the bike has been passed around several members of the BikeExchange office for urban commuting duties as well as serving as my main transportation tool to and from work. 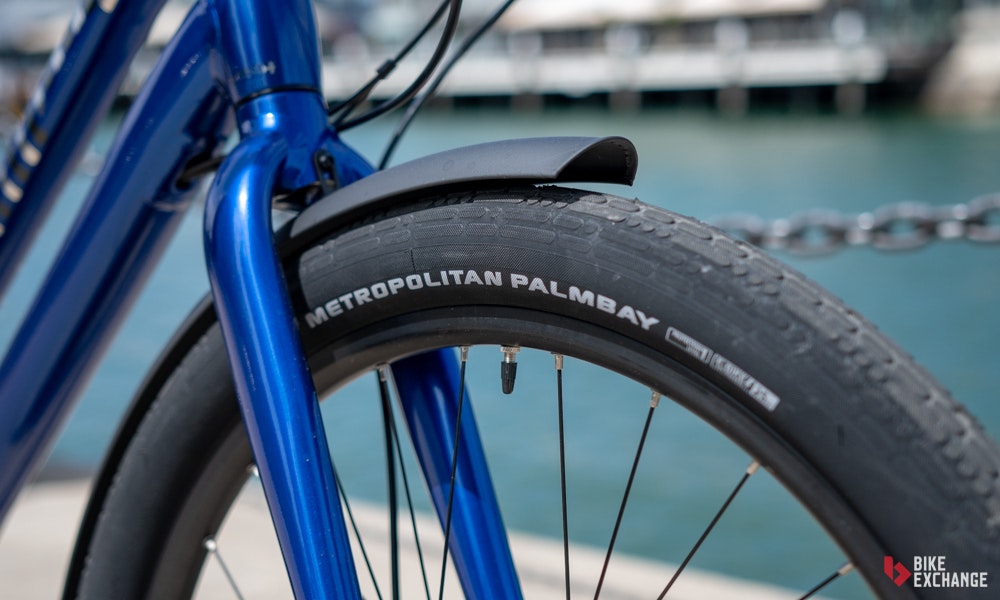 The collective first impressions of the bike were of supreme comfort, a trait that carried through the entire test period. With its plush perch, adjustable cockpit and ergonomic grips, the LaFree E+ was effortless and easy to ride. Likened, on more than one occasion, to riding a leather recliner, the robust and meaty 2.35” wide urban-focussed rubber provided more than enough cushioning to smooth out all but the most aggressive bumps during the test period.

The easily adjustable cockpit and seatpost also made swapping between riders of various heights a breeze, while the size Large test bike suited my 186cm frame perfectly.

Whilst beauty is in the eye of the beholder, the styling, paint scheme and finish of the bike, in my opinion, is a winning combination. The royal blue hides a number of subtle branding queues and really pops in the sunlight. Say what you will about step-through frames, but for those in the market for an aesthetically pleasing super commuter, it’s hard to look past this one. 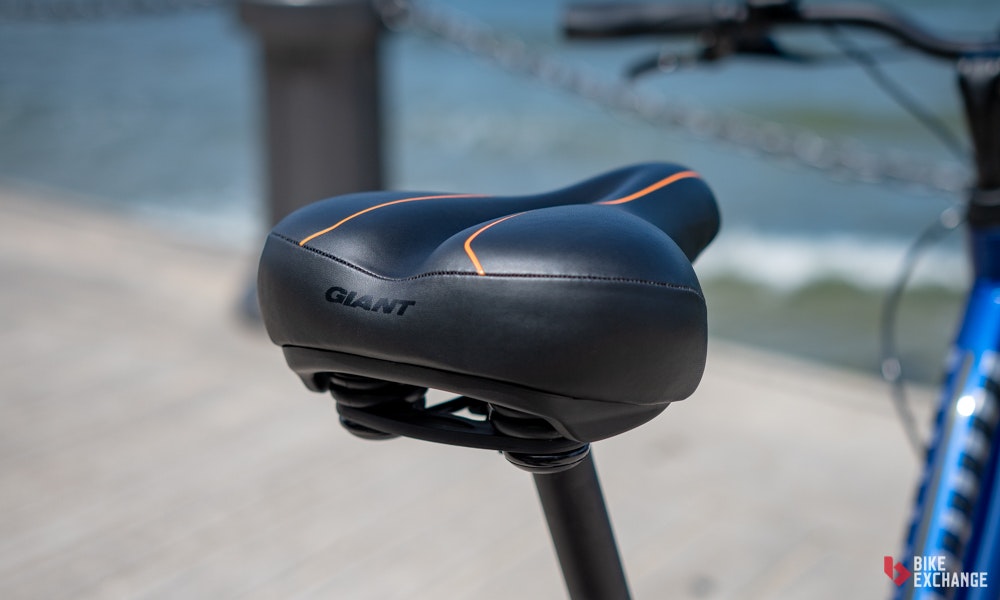 The riding experience of the bike was largely positive for the bulk of the test period. I had managed to clock up a couple of hundred kilometres worth of commuting duties aboard the LaFree E+ 2 in a largely fuss-free fashion.

My only real criticism throughout the review period was with the 1x (single chainring) set up. I wasn’t seeking more gears, but rather the lack of a chain catcher or a more secure rear derailleur led to a number of dropped chains. There is a chain guard in place, but it serves to keep grease off your leg and doesn’t do much for keeping the chain on the chainring when dropping off kerbs or rolling over larger bumps, both a common occurrence riding in the urban environment.

Aside from that, the groupset performed perfectly, as to be expected from the likes of Shimano. The Tektro brakes impressed with their power and ease of modulation under heavy braking, however, shuddering and occasional squeals were ever present during the review period. 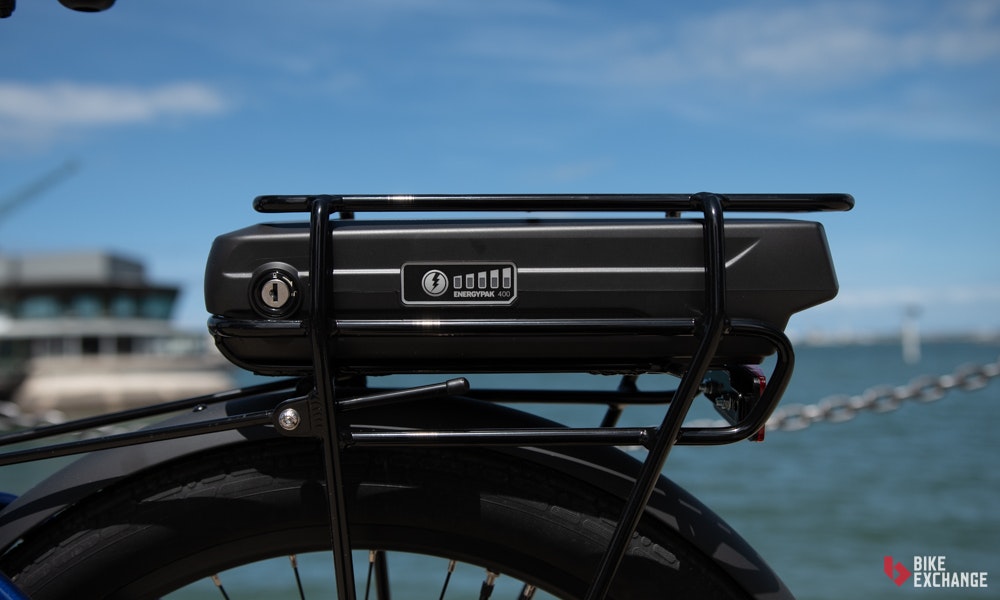 Whilst the analogue components of the bike fulfilled their job to a high standard, it was the drive system that was the real winner. The internally belt driven SyncDrive Life motor was flawless in its function. Whisper quiet in its operation, the power was smooth and effortless in its application, seldom leaving me feeling like the bike wanted to surge forward on its own accord. Whilst I imagine that the majority of riders will opt to go straight for the highest output setting, I found the auto assistance level to provide intuitive and usable assistance in most situations.

Battery life was another tick for the LaFree E+. Whilst 400Wh is by no means “big capacity” in the age of 700+ Wh battery systems, the rear mounted unit provided me with in excess of 100km of range on my undulating commute. 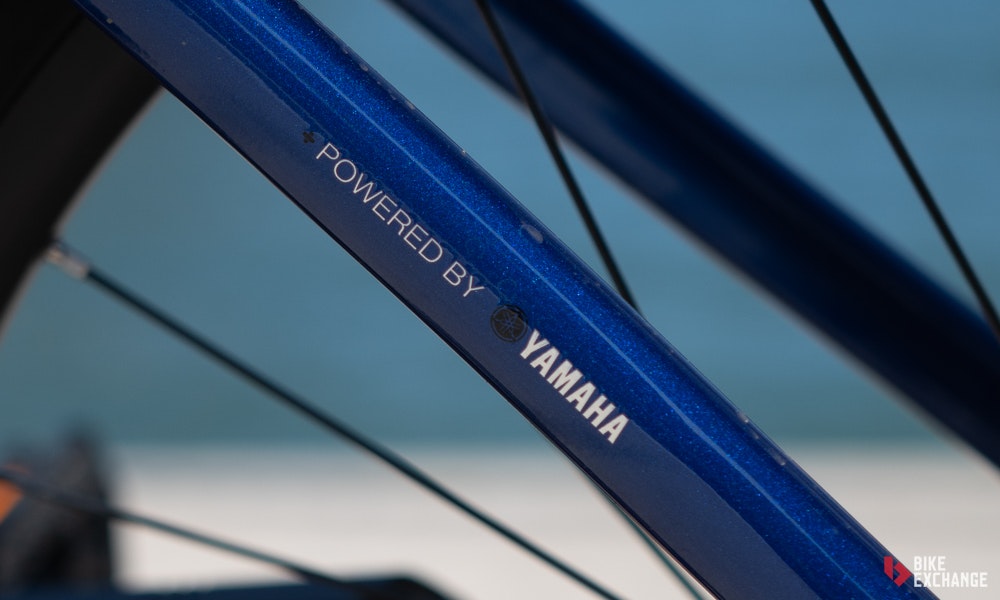 With e-bikes across the industry benefiting from a trickle-down effect, 2019 looks set to be the biggest year in assisted riding yet. As more of the industry's big players introduce quality e-bikes at ever sharpening price points, consumers look to be the real winners in the electrified arms race.

Introducing a quality product at a price that undercuts its competition, Giant have unearthed an e-bike that has all of the ingredients to be the Taiwanese company’s most popular model. With quality components on board, considered additional extras and a fantastic drive unit, Despite a few kinks to iron out, if the LaFree E+ represents where affordable e-bikes are headed, the future is bright.

Looking to get started in the world of assisted riding? Check out our Ultimate E-Bike Buyers Guide for all you need to know 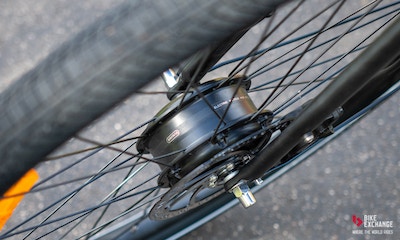 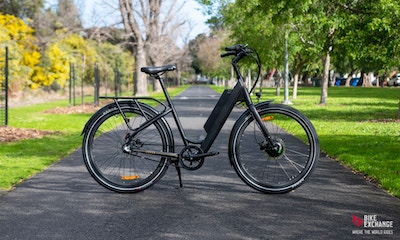 We put the stylish, affordable and practical Lekker X e-bike through its paces in this in-depth review...