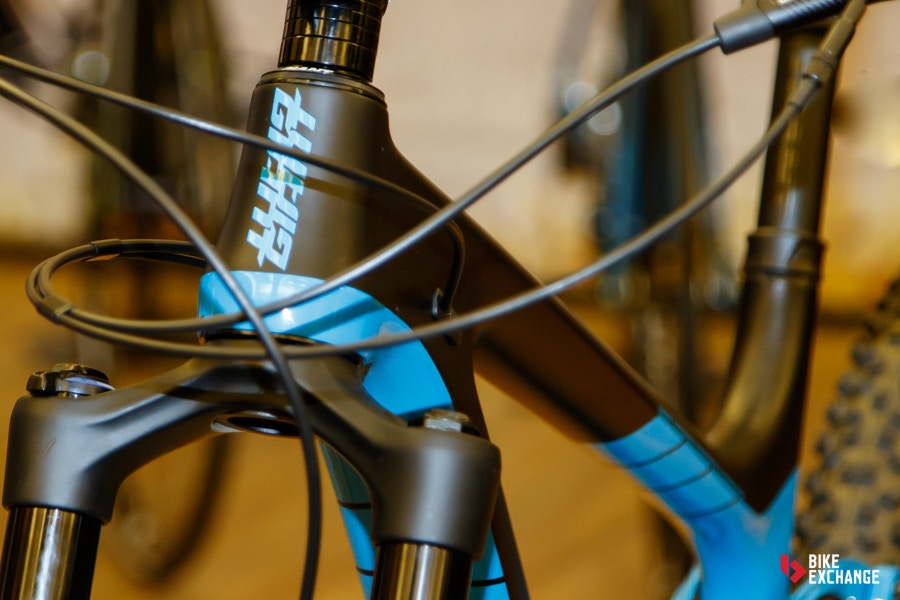 We’re barely half way through 2016 and 2017 bikes are starting to trickle through to stores. The new product season sees plenty of fresh things in the mountain bike world from Giant.

Giant has revamped its hugely popular Trance trail bike and Anthem cross country ranges. Additionally, it seems the hardtail is still very much alive, with Giant overhauling the Talon and XTC ranges, while introducing a new mid-level range, the Fathom 29.

Across the board, these new bikes feature geometry that’s now longer, lower and slacker. It’s a common theme amongst the top mountain bike brands, and helps to create a bike that handles better and offers greater control.

Beyond the technical changes, it seems 2017 is another year of Neon. The bikes are beyond bright! Below we highlight Giant Australia's complete unisex mountain bike range for 2017.

The Giant Talon has been one of the biggest selling entry-level mountain bike hardtails in recent years. For 2017, the aluminium frames get an update in geometry that’s said to create a more confident ride. The Talon is now exclusively 27.5in wheels only. Just the Talon 3 and 2 will be available in Australia. Some will notice that the 29er wheels are a little out of character given Giant’s strong focus on 27.5in wheels since 2013. This is due to the larger wheel proving to be the more popular choice in hardtails and general cross-country bikes.

Fathom 29er 1 - AU$1,699: The Fathom 29er 1 looks to have plenty on offer to the aspiring mountain biker, including a 1x11 SRAM NX drivetrain, Shimano hydraulic disc brakes and a Suntour Axon LO-RC fork. For those keen on a dual suspension bike at a similar price point, then check out the Stance 2. At AU$1,999, the bike features Giant’s ‘FlexPoint’ suspension system, 120mm rear wheel travel and 27.5in wheels. RockShox supplies the shocks front and back, while Shimano Deore takes care of the shifting duties. What was previously Giant’s race hardtail platform is now becoming a rather versatile trail weapon. An all-new frame moves to ‘Boost’ axle spacing, which has allowed for enormous tyre clearance without increasing rear end length.

This extra space means that international markets will see the XTC Advanced available with either 27.5 Plus or 29er race wheels. For the moment, Australia will only see the 29er version, but changing the wheels yourself is an option. This versatility is a trend we’re seeing plenty of from leading trail bike brands, but Giant is one of the first (if not the first) to do it in a carbon hardtail. "Giant suggested racing with 29er wheels on Sunday, and using 27.5 Plus-sized wheels (3in width!) to go bike packing with on Monday (assuming you don’t have a job to be at).

27.5 Plus tyres feature a similar external diameter to a 29er tyre, but pack a massive three inches of grippy tread and plush air volume. Adding even further versatility, this new XTC Advanced platform will feature horizontal dropouts, making converting to a singlespeed a sinch. Once a short travel cross-country (XC) race bike, the Anthem dual suspension is following trends as XC riding continues to blur into the ‘trail’ category with more technical and demanding riding.

Featuring 27.5in wheels, both the new carbon (Advanced) and alloy models receive a major frame overhaul. Rear suspension travel has been bumped up to 110mm, while a longer 120mm fork sits up front. The top tube reach extends by 10mm, while the rear end is now 5mm shorter thanks to new Boost axle spacing (148 x 12mm). Head angle is at a relatively slack (for XC) 68-degrees.

Perhaps the biggest story is in Giant’s refinement of its Maestro suspension system that is found on the new Anthem and Trance bikes. The brand claims to have pioneered the new Metric rear shock standard, which results in a number of small, but significant changes.

Now using a Trunnion mount (rear shock is attached lower on its body and not at a top eyelet), the shock is said to offer a longer shaft within the same overall space. This means the bike’s leverage ratio is now lower and so can run a lower air pressure. Giant states that by lowering the air pressure (7.3% for the Anthem) the damper is able to react more smoothly and not have to fight the reaction of air pressure as much. The result being improved pedaling, braking and small bump sensitivity without a downside. In addition to all that, Giant has a new ‘Forged Composite’ upper rocker link that’s said to half the weight of aluminium, while being far stiffer and stronger. This new composite link (similar to carbon) will feature on both aluminium and carbon Anthem models. This also means it’s only the front triangles that differ between the Advanced and standard models.

This change in making the Anthem more trail worthy has of course bumped up its weight and perhaps made it less suitable for the lycra-wearing racers. We weighed the AU$8,299 Anthem Advanced 0 at 11.4kg. It’s a figure that makes sense when you consider the included dropper seat post, RockShox Pike fork, SRAM XX1 Eagle drivetrain and 2.25in wide tyres.

Those keen on a race-focused dual suspension will find the Anthem X 29er still available. This frame continues on from the past season without change. Now that the Anthem is a more capable trail machine, Giant Australia has decided to not bring in the identical-framed Anthem SX models (for now). These beefed up international versions feature even wider tyres, wider bars, a dropper seatpost and a 140mm travel fork – all things the new Trance has on offer.

Trail riding is undoubtedly getting tougher, trails are becoming more technical with bigger obstacles and faster speeds. Adapting to this trend, the hugely popular Trance range see many changes for 2017.

New geometry means the Trance now offers 10mm longer reach, 5mm shorter chainstays and 5mm lower bottom bracket height. Giant had to rework a number of things on the frame to achieve this while bumping front fork travel to 150mm, with the rear at 140mm. Head angle sits at 67-degrees.

As described above for the Anthem, the new refined Maestro suspension system results in a claimed 3.3% less air pressure needed for the Trance’s rear shock. Giant state that pedaling efficiency has been improved by 4% too.

Not only is the bottom bracket lower, but the weight of the bike is too. Giant state the seat stays now sit 15mm lower resulting in shorter and far stiffer rear end. The lower central pivot placement apparently allows for greater internally routed dropper post compatibility too. The frame pivot bolts and derailleur hanger haven’t been ignored either, with it now all stronger, stiffer and easier rear wheel removal/installation. The gravity-orientated Reign and Glory bikes continue without any major changes for 2017. The Reign will be available with an alloy frame in the 1 or 2, with the Reign Advanced lightening things up. Built for downhill racing, the Glory range in Australia will consist of three models. Giant continue to expand into parts and accessories

There was plenty new to see in Giant's expansive range of parts, clothing and riding accessories. However, it was two items in particular stood out for us. First is the new Flow mountain bike shoe using Giant's 'EXOBeam' outersole design. This design aims to keep the shoe stiff along its length, but allow for natural torsional flex at the heel. The shoe looks to feature a very grippy tread, durable upper and is pitched to the masses as a general 'trail riding' shoe. Pricing is to be confirmed.

The other item is the new 'Control Tank' which works as an air chamber to seat tubeless tyres. Simply attach your floor pump of choice to the tank, inflate the tank to the suggested pressure and then use the tank to pop those stubborn tubeless tyres into place. It's a bicycle-specific and travel-friendly alternative to using an air compressor. We've seen similar products from Bontrager and Topeak already (and believe Specialized will soon to have one too), but this one doesn't feature a pump or gauge and so should be priced far cheaper. Exact pricing is also to be confirmed.

Find out more of the new range by visiting your local Giant dealer. Find them through our dealer finder portal.