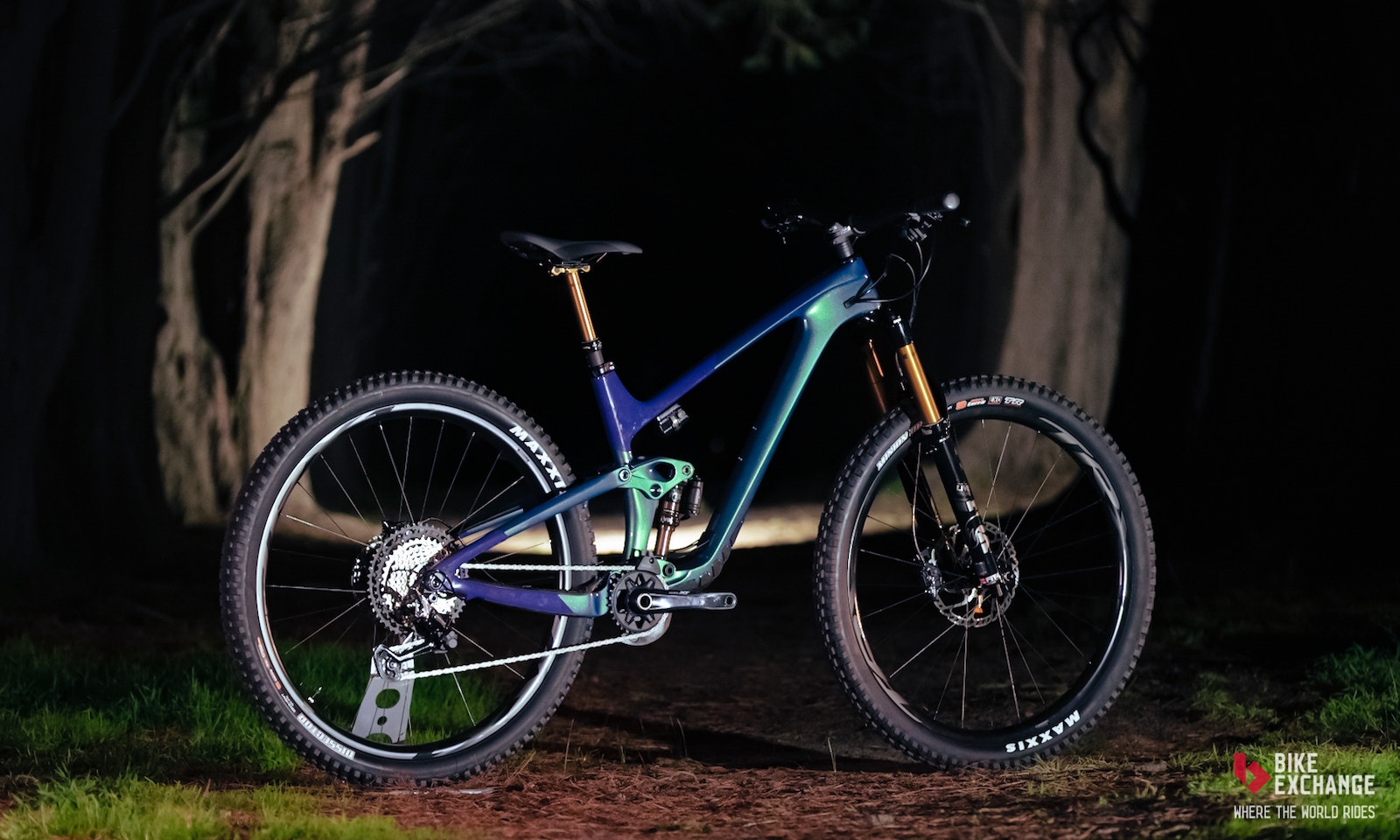 Hot on the heels of the latest iteration of Giant’s incredibly popular Trance X trail mountain bike platform, the world’s largest bike manufacturer added carbon variants of the Trance Advanced X to the product lineup. Featuring a host of flagship features such as Fox’s intelligent Live Valve suspension system combined with a smattering of high-end carbon componentry, we’ve spent the last month putting the top dog Trance x Advanced Pro 29 0 through its paces. Read on for an overview of the bike and our ride impressions of this impressive trail shredder.

Who’s It For?: Riders are in the market for a versatile offroad ride that is a blast on descents and offers superb climbing efficiency.

What We Liked: High-end XT/XTR matched with carbon components made for a smooth ride, adjustable geometry is a welcome addition and expands the bike’s scope.

What We Didn’t: Miscellaneous rattles from the many wires that make up the LiveValve suspension system while descending isn’t something you’d expect on a bike at this price level.

What We’d Change: While LiveValve is likely an excellent option for some riders, we feel a standard suspension set-up would suit our local trails better. 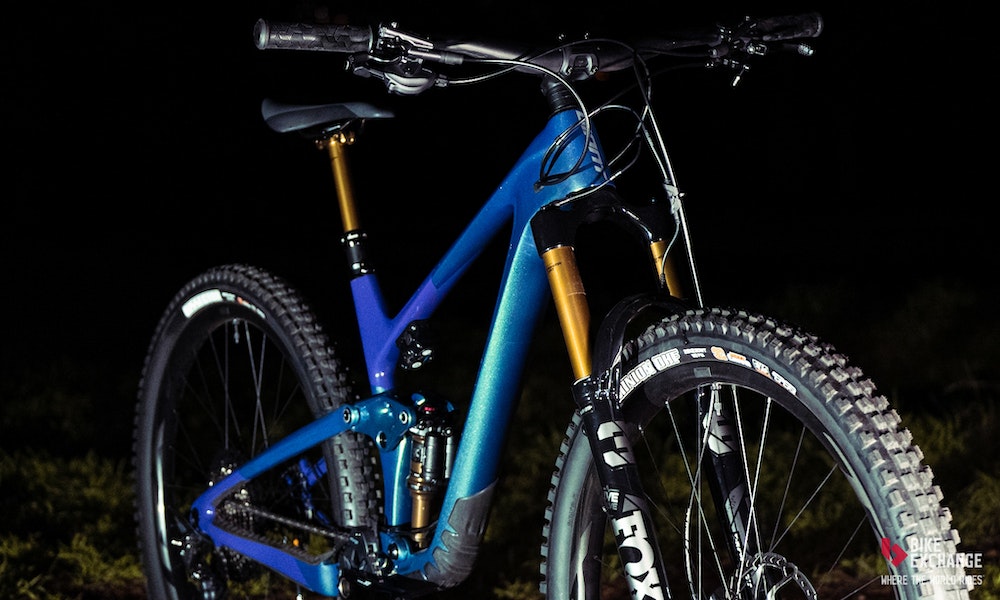 While the Trance Advanced X was offered exclusively in an aluminium frameset at launch, it didn’t take long for the Taiwanese titans to add a carbon fibre framed range to its versatile trail platform.

The change or upgrade in frame material has substantially affected the frame’s weight, with the carbon frame claimed to be a whopping 682g lighter than the standard Trance X alloy range. All told our size Medium test bike tips the scales at an impressive 13.5kg. Other upgrades to the frame over the aluminium variant include titanium hardware at the rocker link, which is said to boost stiffness at the rear swingarm.

The geometry remains unchanged from the aluminium model, with the flagship variants scoring the same 65.5º head angle and 77.2º seat angle. The flip chip also carries over, which when, uhh... flipped, increases the bottom bracket height by 10mm and steepens the head and seat tube angles by 0.7º, perfect for those who’d rather focus on pedalling efficiency and technical climbs.

Protecting the frame is a generous helping of transparent plastic 3M vinyl on the upper section of the downtube and a mix of moulded rubber at the base of the downtube and bottom bracket area. A ribbed rubber chainstay protector is also in use to protect against chain slap on technical terrain.

The Trance X Advanced Pro series utilises the same carbon frame across the product line-up and starts at AU$6,599 for the Advanced Pro 29 2. Stepping up the Advanced Pro 1 will set riders back AU$7,699 and looks to offer the best balance of cost and performance while the flagship Advanced Pro 0 tested here retails for AU$11,499. 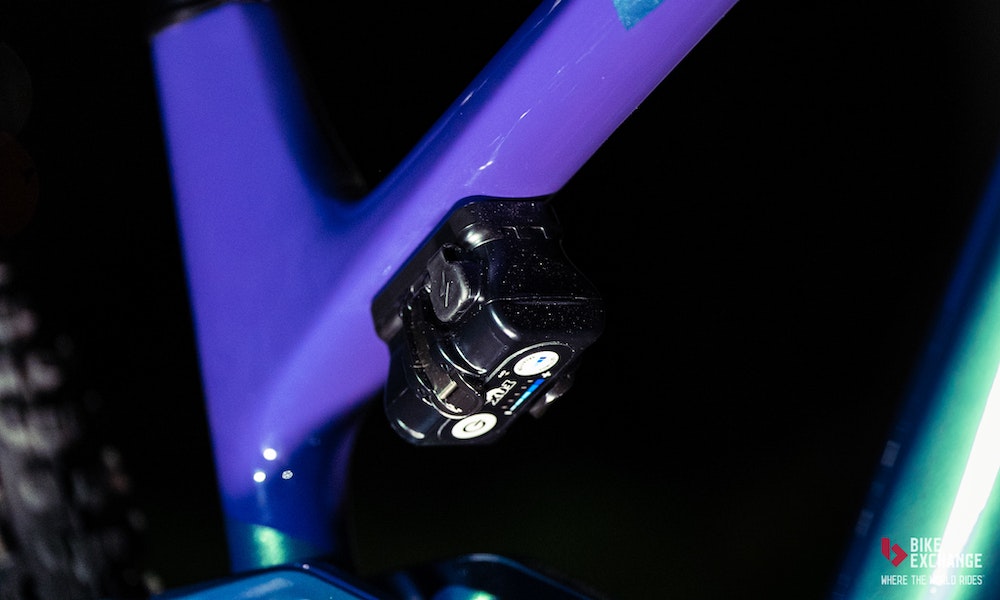 Topping the Trance X hierarchy means this steed scores an impressive specification from the factory; we’ll cover the mechanical components below. Still, arguably the show stopper and most significant talking point about this bike is the use of Fox’s LiveValve electronic suspension system.

The LiveValve system utilises accelerometers at the front fork and rear suspension to automatically adjust the fork and shock between open and locked out or firm settings. It is said to do this up to 1,000 times a second with a reaction time in three milliseconds. We’ll get into how this tech translates to the real world in our riding impressions below. Still, on paper, this smart suspension tech looks to take the guesswork out of the riding experience and depending on the trails you’re likely to ride, this could be either a boon or a bane.

The LiveValve system is paired with a Fox Factory 36 fork up front with a FIT4 Damper and 150mm of travel. At the frame, the system is mated to a Fox Float DPX2 Factory series that’s been fettled with by Fox to accept the new tech. 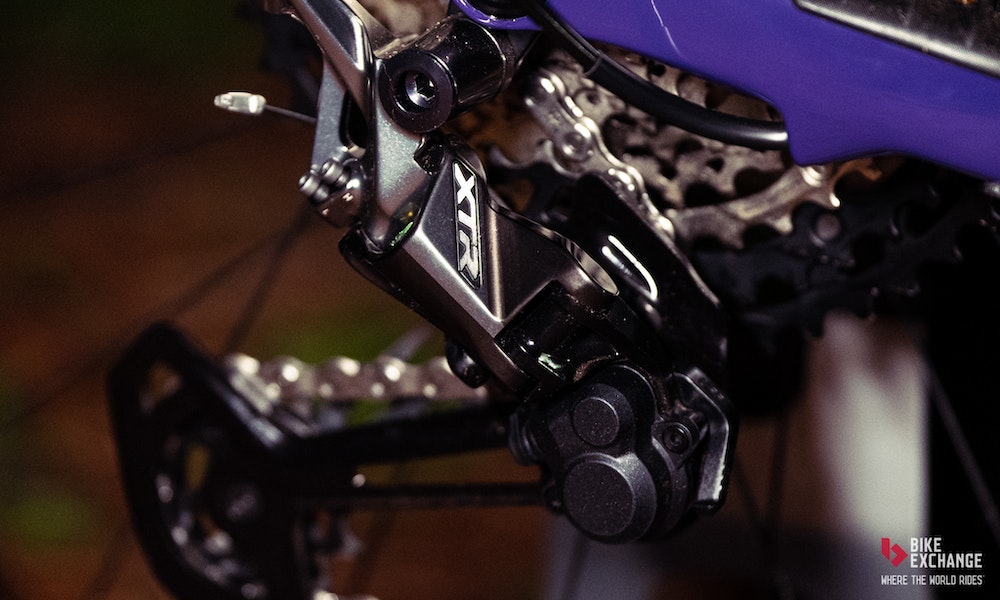 Moving to the mechanical parts of the ride and the components fitted to this steed are suitably high-end to match the flagship price tag. Fox continues its suspension offerings with a Transfer Factory dropper seatpost. Shimano takes care of the going and slowing with its sublime Deore XT 12-Speed drivetrain, with an XTR rear derailleur handling the sprocket swapping duties. Shimano also supplies the stoppers with its Deore XT 4-Piston hydraulic callipers gripping a 203mm rotor up front and a 180mm rotor at the rear.

Moving to touchpoints and the high-end affair continues with Giant equipping a smattering of carbon components to the Advanced Pro 29 0, including a Giant Contact SLR Trail riser 780mm wide carbon bar and a set of Giant TRX 1 Hookless carbon rims set up tubeless from the factory. Maxxis provides the tyres with a 2.5” wide Minion DHF up front, while a 2.4” wide Dissector rear tyre wraps around the rear hoop. A Giant Romero SL saddle rounds out the impressive specification. 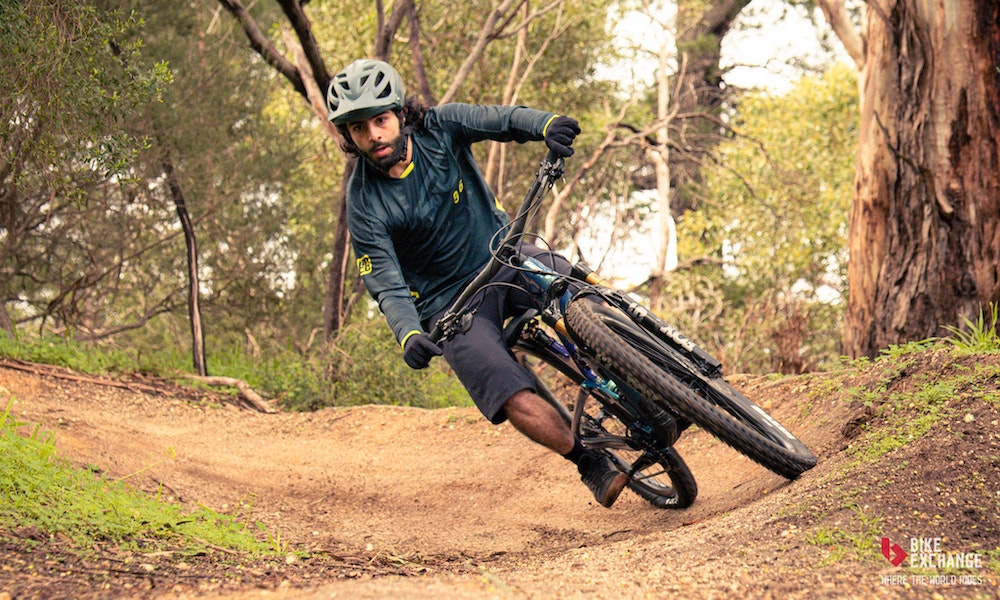 It’s no secret that depending on the steed that you’re after; a bike can be rarer than rocking horse droppings in this COVID era we’re currently living through. So when the crew at Giant Melbourne gave us the opportunity to spend some time on the latest iteration of its flagship trail bike that was flying off the showroom floor, we jumped at the opportunity.

First off, the aesthetics. We’re big fans of quality paint schemes and tastefully placed logo’s on any ride. In our humble opinion, the flagship Trance X Advanced is sporting one of the loveliest mountain bike paint jobs we’ve had the pleasure of laying eyes on, let alone throwing a leg over. The minimalist logo’s let the paint do the heavy lifting in the looks departments, and we’re absolutely here for it. Once we’d finished drolling over its looks, it was time to thread some pedals on and get riding.

While we’d have loved to test this bike over many different surfaces, bike parks and trail types, a series of lockdowns during the testing period limited our trail time to the parks and trails in and around Melbourne, Red Hill and the Yarra Trails. With more gradual, flowy trails that feature a nice mix of technical features, climbing and descending providing the test area for this review.

In our mountain bike comparison piece, we mentioned that 140mm is right about the sweet spot for a trail bike. With 150mm at the fork and 135mm at the frame, the Trance X leans a little more into All-Mountain territory, but with the aid of its flip chip, it is just as versatile as any other trail bike we’ve ridden. With 0.7º of angle adjustment and an 8mm difference at the bottom bracket, the flip chip has a noticeable effect on the bike’s character. The pedalling efficiency on offer in the raised position, thanks to the steeper angles and increased pedal clearance, makes the ride almost on the same level as an XC bike, making it ideal for gobbling up techy climbs and pedal heavy trails. The Trance X feels composed and planted in the low setting at the other end of the spectrum, particularly on the descents. However, we did find that pedal strikes and clearance may be limited if your trails feature more technical features like rock gardens and exposed tree roots. 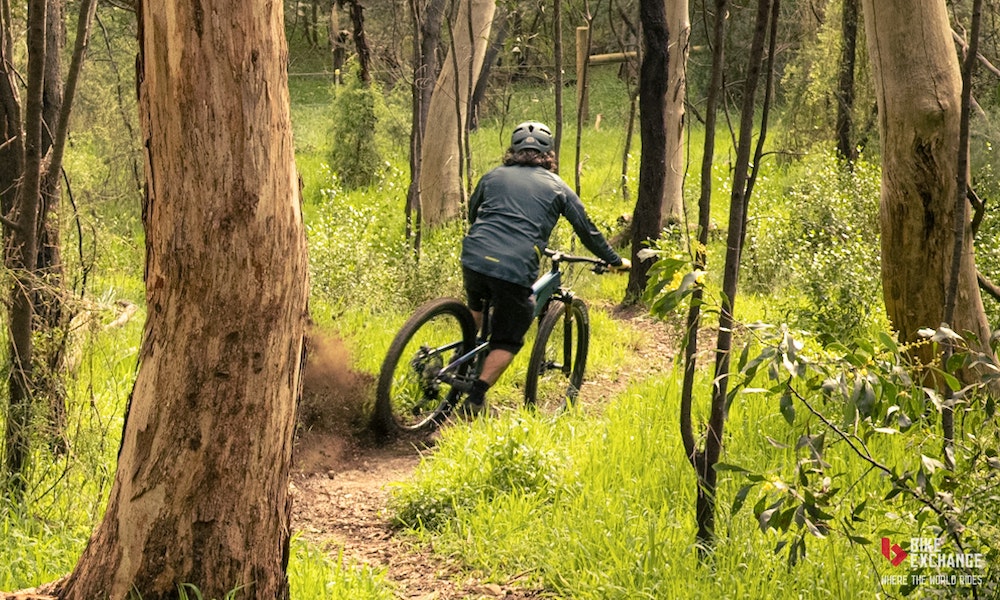 In an age when trail bikes continue to get longer, lower and slacker, we were happy to see Giant keep to some more conservative angles at the head tube (65.5-66.2º). This is arguably the key contributor to the versatile nature of the bike.

Moving to the components and the quality is as you’d expect from flagship Shimano parts. The shifting was crisp and precise, the brakes with their four-piston callipers were an excellent match for the frame and its intended use. The high-end carbon components and Fox Factory level parts were also nice, adding a smooth, almost effortless riding quality to the bike. One area that Giant should be commended on is the addition of decent quality Maxxis rubber set-up tubeless from the factory. After all, the tyre set-up on any bike is the most cost-effective upgrade a rider can make to the ride quality.

Now the elephant in the room, the LiveValve suspension system. This is arguably the make or break feature of the flagship model; after all, on paper, it looks to be an excellent addition to the bike, leaving you to focus on the ride rather than faffing with lockout settings. First, the positives, in short, the suspension system does what it says on the tin. The most noticeable change is when the trail points upwards.

The bike feels noticeably more planted, especially on steep, technical climbs littered with roots or rocks where the bike tends to lose some rear traction. With the live working, you have less of that, and the efficiency increases considerably. On the descents, the difference wasn’t all that noticeable from a standard suspension system. Landing after jumps, going through berms, seemed just as natural as our usual daily drivers, the Specialized Stumpjumper and a custom but slightly longer travel Specialized Status. 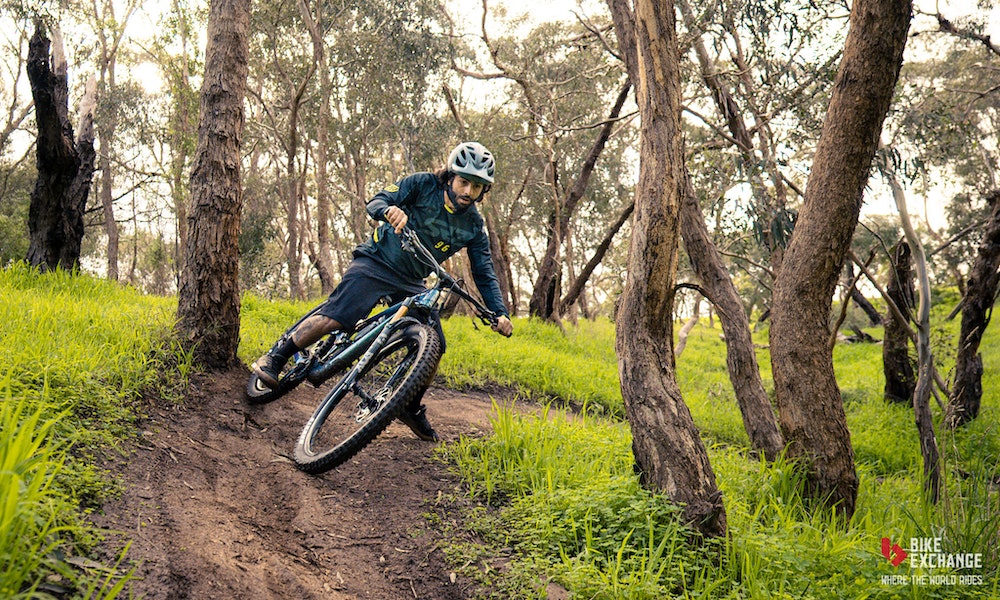 The low point of the suspension system is how it reacts at high speed. Roll through a technical section of trail at pace, and the system reacting to the terrain under it caused a disappointing amount of rattle. This is partly caused by the accelerometers locking and unlocking the suspension and the myriad of exposed, largely undamped wiring on the frame required to make the system work. It is worth noting that this may be a total non-issue depending on the trails you regularly ride. However, on our rocky, rooted trails, a standard suspension set-up would likely suit our terrain better. Outside of the rattles, we had no other faults to note with the ride. 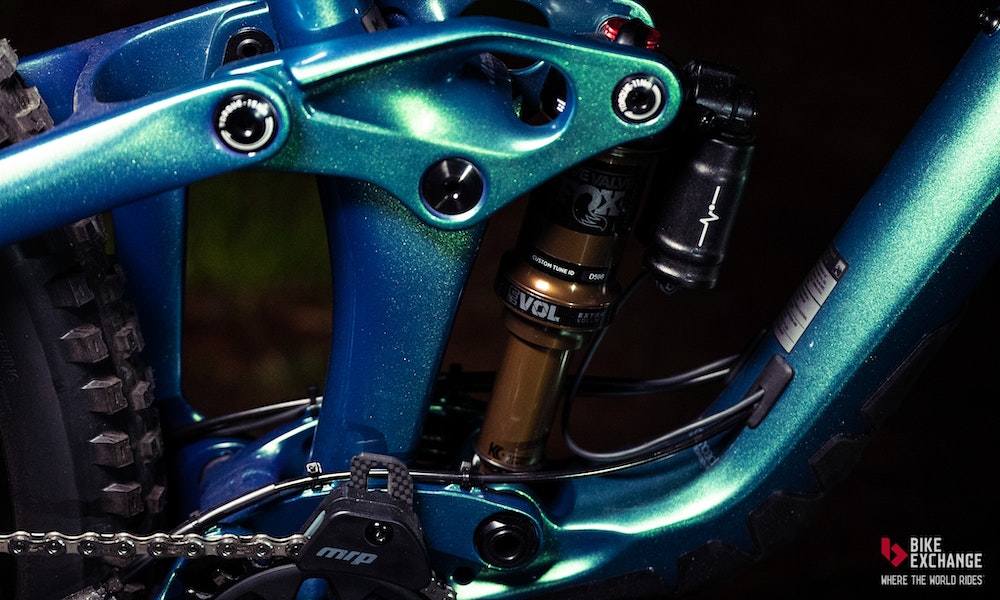 In closing, the flagship trail bike offering from the world’s largest bike manufacturer is more or less as you’d expect it to be. It’s a stout feeling, versatile and well-sorted ride that offers decent value for money despite its price tag. That being said, we can’t help but feel the addition of the Fox LiveValve system adds some unnecessary complication to an otherwise excellent bike. So if you’re in the market for a well-sorted trail bike that’s loaded with tech, this is the bike for you. However, suppose you’re happy to forego the suspension tech and compromise on some of the drivetrain componentry, priced at AU$7,699, the Advanced Pro 1 looks to offer the best bang for your buck in the Trance X range and is worth a spot high on your consideration list.

Thanks to Giant Melbourne for providing the product for this test.

Browse the full range of mountain bikes on offer from leading independent retailers across the country right here, at Australia’s number one online bike marketplace.