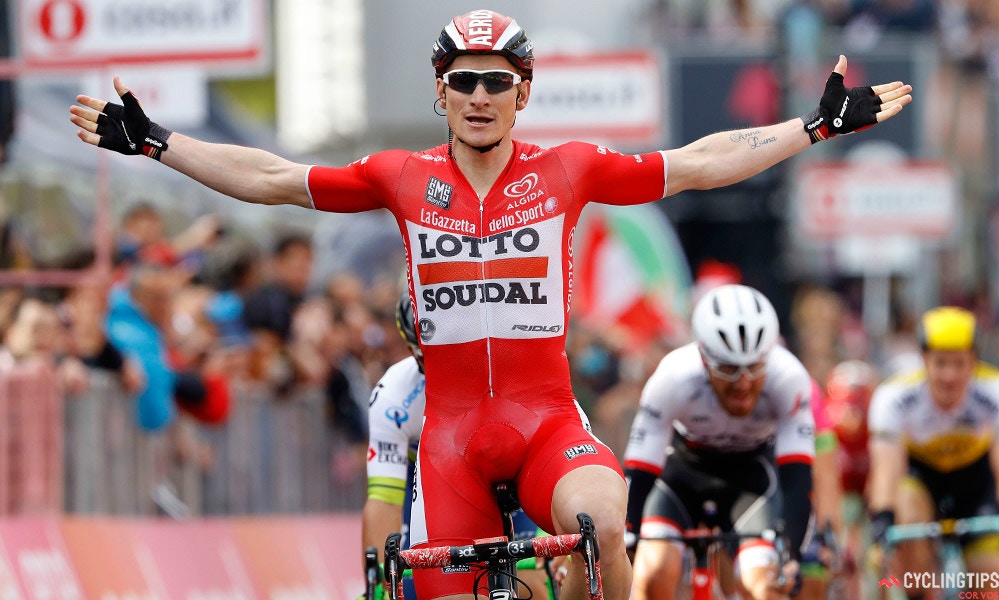 Notching up his third stage win of the race and the 20th Grand Tour victory of his career, Andre Greipel brought his participation in the 2016 Giro d’Italia to a close with a triumphant gallop in Bibione.

The German was given superb assistance by his Lotto Soudal team, which did much of the chasing down of breakaway riders Daniel Oss (BMC Racing Team) and Mirco Maestri (Bardiani-CSF). They were finally hauled back with 22 kilometres to go, after which Lotto Soudal continued to ride and dissuade attacks.

Adam Hansen did a massive pull inside the final five kilometres and, after a brief bit of pace-setting by Lampre-Merida, Jurgen Roelandts hit the front in a final leadout effort by Greipel. The latter then opened up his sprint and held off Caleb Ewan (Orica-GreenEdge), who got up to his bottom bracket but didn’t have the space against the barriers to go any further.

Greipel appeared to pull further ahead inside the final 100 metres, raising questions about whether Ewan would have won with more room.

The victory sees Greipel move level with Erik Zabel in terms of Grand Tour stage successes. “Of course it makes me proud to reach this goal at the Giro d’Italia,” he said, “and to be in the shape I wanted even with the difficult spring that I had.

“The team was very good, it rode hard today to set the pace. It was awesome teamwork and I think this is a really nice victory for myself and the team.”

Greipel was asked about Ewan going close. He said that the course and conditions meant that he had to play his card early.

“The goal was to hit the front in the last corner with Jurgen Roelandts,” he said. “I left a bit of a gap to accelerate in his slipstream. I knew that there was a crosswind, so I knew I would be on the right. I started my sprint first, I could chose my line as I wanted.

“I saw Caleb on the right side and obviously he choose the wrong side. His time will come.”

Greipel is known as a fair sprinter and, unlike some other rivals, tends not to deviate from his line. He kept close to the barriers and suggested that Ewan should have known he wouldn’t make things simple for him.

“I was in front, I just did my sprint until the line,” he said. “It was a bit of a difficult final straight and I am just happy to win.”

The flat, fast stage was affected by rain for several hours. While the two finishing laps were dry, the tricky, twisting roads there prompted the race organisers to take the general classification times at the start of the final lap, thus enabling the GC riders to back off there.

That meant there were no changes to the overall standings, with Bob Jungels (Etixx-QuickStep) continuing to lead overall.

He is 24 seconds clear of Andrey Amador (Movistar) and one minute seven seconds up on both Alejandro Valverde (Movistar Team) and Steven Kruijswijk (Team LottoNL-Jumbo).

A big mountain stage follows on Friday and he admitted that he was unsure how it would go. “It is hard to say. It is going to be a really tough stage,” he said. “At the moment I don’t really know where I am against the others in the really high climbs.

“I think I have shown that my shape is great but tomorrow will be the first showdown in the high mountains. We will see what is going to happen.”

Stage 12 of the Giro d’Italia was predicted to conclude in a bunch sprint, thanks to the flat roads along the 182 kilometres between Noale and Bibione. One of those aiming for victory was Andre Griepel, who said that he was planning on exiting the race after the conclusion of the stage.

He’s aiming for success on the sprint stages of the Tour de France and so didn’t want to go too deep by finishing the Giro.

While the stage was bereft of any categorised climbs, it was complicated by wet conditions plus a two laps of a tricky eight kilometre finishing circuit. This had multiple corners and prompted concerns about possible crashes.

That finish was still hours away, though, with the flag dropping and early attacks being launched.

One rider who succeeded in getting clear was Daniel Oss (BMC Racing Team) and after 20 kilometres, he was almost three minutes ahead. He was being chased by neo pro Mirco Maestri (Bardiani-CSF), who caught him soon afterwards.

Alexandr Kolobnev (Gazprom-Rusvelo) tried to get across but was unable to do so, leaving just two up the road.

The duo built a lead of four minutes but the Lotto Soudal-led bunch decided to accelerate and reduced this to under two and a half. Gazprom-Rusvelo later came to the front and further hewed it down to one minute 50 seconds with 100 kilometres left.

Oss won the intermediate sprint at Ormelle (km. 94.7), with Giacomo Nizzolo (Trek-Segafredo) grabbing third from the peloton. The gap climbed again to two and a half minutes, after which Oss took the next bonus sprint in Portogruaro (km. 131.1). Nizzolo was again best of the bunch.

The wet conditions were beginning to abate and the finish was dry. However, despite that, the race organisers announced that the times for the general classification would be taken at the start of the finishing circuit, some eight kilometres from the end. This was to avoid consequences of possible crashes on that circuit.

Given the effect on the racing, the obvious question is why the twisting route was approved in the first place.

With 32 kilometres left Oss and Maestri were 32 seconds ahead. The game was up but they plugged on anyway, seeking to delay the recapture as long as possible. They were finally hauled back with 22 kilometres left, further increasing the odds of a big gallop.

Greipel’s Lotto Soudal team was banking on that outcome and continued to drive the pace. The other sprint teams were happy to let them at it, conserving energy for the finale.

With approximately 16 kilometres to go the riders crossed the finish line for the first time, beginning the two finishing laps. Lotto Soudal continued to drive the pace and, once past the finish line again, the clock stopped for the general classification.

This enabled the overall contenders to back off, thus limiting possible danger.

Lotto Soudal led under the five kilometre to go banner, the Belgian team having done a superb job during the stage. The other sprint teams hovered nearby, waiting for the right moment to push forward.

Adam Hansen led the train into the final two kilometres. Orica-GreenEdge was lurking nearby with Caleb Ewan, but still nobody tried to overtake the red team.

Hansen was still on the front until 1.2 kilometres to go, continuing his massive effort before a Lampre-Merida rider hit the front. Greipel lurked third in line, maintaining a good position.

Jurgen Roelandts then hit the front with approximately 900 metres to go, making the final effort for Greipel. The German rounded the last corner in a perfect position and then accelerated. Ewan came up on his right and tried to get by, but the gap wasn’t there against the barriers and Greipel held on all the way to the line.

He confirmed rumours that it was his final day on the race.

“I am going to leave this evening. Of course, I am not happy about it but I am not a machine,” he stated. “My season is full of goals and I need to go on until October [the world championships in Qatar – ed.]. It has been a hard 12 days and I am looking forward to recovering and then my next goals.” 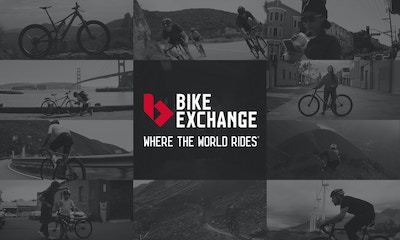 A Message to our BikeExchange Community

Our commitment to you, our valued customers, during the COVID-19 pandemic...