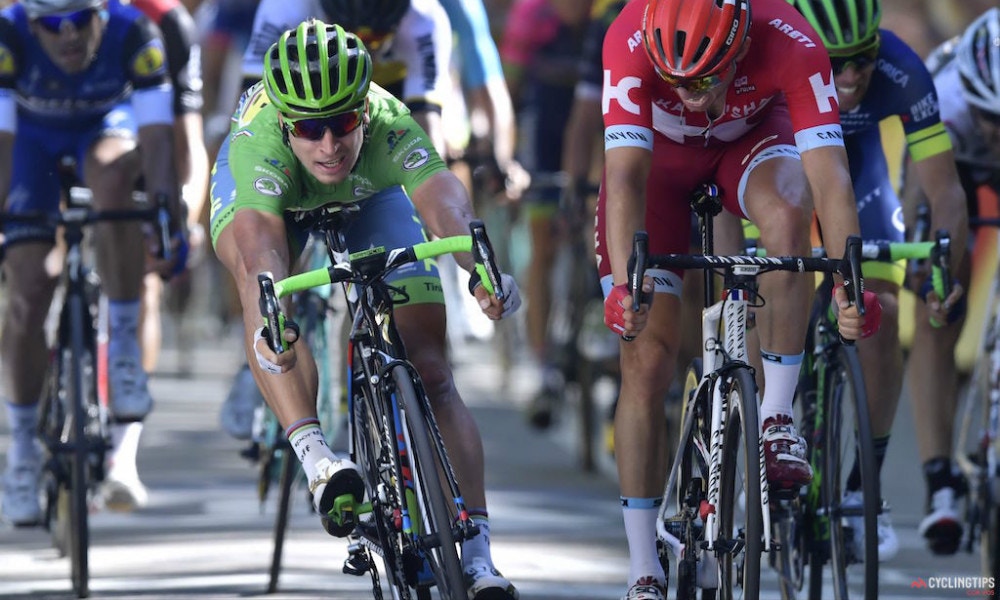 There was was no fairytale Tour de France ending for Fabian Cancellara (Trek-Segafredo) on Monday in Berne, the Swiss rider’s hometown, as Peter Sagan (Tinkoff) took the Stage 16 victory out of a select group, in a photo finish.

Alexander Kristoff (Katusha) finished second by mere centimetres and Sondre Holst Enger (IAM) finished third. Cancellara was in the mix, but could only muster sixth on the stage.

The peloton had to navigate a technical finale on stage 16 with a cobblestone-lined climb coming in the final kilometres. The peloton split dramatically on the climb with the classics riders of the peloton coming to the fore.

Ramunas Navardauskas (Cannondale-Drapac) and Sep Vanmarcke (LottoNL-Jumbo) tried an attack, but it came to nothing due to the high pace in the bunch. Warren Barguil (Giant-Alepcin) led the peloton into the final kilometre in support of his teammate John Degankolb.

Alejandro Valverde (Movistar) opened the sprint, but the Spaniard didn’t have the speed to compete with the likes of Kristoff and Sagan. The world champion captured the victory with the bike throw, his third stage victory of this year’s Tour. Kristoff later admitted he’d misjudged the line, due to shadows on the finishing straight.

“I was not waiting for the results, I thought I was second until they came and told me I had won,” Sagan said after the stage. “It’s unbelievable. After so many times finishing second… the wheel turns. I want to thank my team for the work they did all day. Then it was a crazy finale, very technical. Everyone wanted to be in my wheel. I think Kristoff made a mistake in the sprint. He jumped very late and that’s how I won.”

The peloton split to pieces with the tricky finale, but all of the riders inside the top-10 in the general classification made the split, resulting in no changes at the top of the leader board.

The Tour takes its second rest day on Tuesday.

“It was a pretty sketchy finale so I was just trying to stay out of trouble,” Froome said. “Today was tough, I think everyone will now welcome the rest day.”

On Tuesday the 2016 Tour de France traveled 209km (130mi) from the French town of Moirans-en-Montagne to Berne, Switzerland. A tough final couple of kilometres awaited the riders in the final 3 kilometres with a 250-metre section of uphill cobblestones before a 600 metre climb at 6.5% heading into a flat final kilometre.

“It’s obviously a special day for me,” Cancellara said before the stage. “When you have a stage of the Tour de France, the world’s biggest race, 4 kilometres away from your home, it means something — furthermore with my history on this race and all my days in the Yellow Jersey. There are two routes to get into Bern and the organisers chose the one with cobblestones. I welcome that as a tribute, and I thank them.”

The Etixx-QuickStep duo of Tony Martin and Julian Alaphilippe attacked 13 kilometres into the stage. A formidable duo, Martin is a three-time world time trial champion, and Alaphilippe, overall winner of the Amgen Tour of California, has shown he’s not slowing down despite riding his first Tour. The Frenchman was in the daylong breakaway on Sunday, as well.

Four riders tried to bridge to the two leaders, Lawson Craddock (Cannondale-Drapac), Nicolas Edet (Cofidis), Vegard Breen (Fortuneo-Vital Concept), and Timo Roosen (LottoNL-Jumbo). The quartet would never make it to the front, as Martin was setting a quick tempo. The leaders covered 49.5 kilometres in the first hour of racing.

The chase was reeled in by the peloton with 107km to go and the leaders held an advantage of over five minutes. BMC Racing contributing to the work on the front of the peloton; the team’s owner, Andy Rihs, is Swiss, and the finish suited the team’s rouleur, Greg Van Avermaet.

Lotto-Soudal was notably absent front the of the peloton and Andre Greipel was even seen carrying and distributing water bottles to his teammates. The German sprinter didn’t feel the finish suited him. “I don’t think it’s really a stage for me,” Greipel said at the start. “With the two bumps in the finale, it’s more for riders like Sagan or Matthews. But I think it’s also a great day for a breakaway because everybody’s tired and it’s before the rest day and nobody will really want to chase.”

With 75km to go, the peloton was not underestimating the strength of the leading, as strongmen Rohan Dennis (BMC Racing) and Marciej Bodnar (Tinkoff) spent considerable time riding on the front. Katusha, Direct Energie, and Cofidis also sent forward riders to help with the pacemaking. The gap to the leaders was down to 2:55.

Alaphilippe dropped back to the peloton with 25km to go on the Category 4 Côte de Mühleberg (1.2km at 4.8%), with the peloton just over 30 seconds behind. Martin was reeled in over the top of the climb with 22km to the finish, with BMC Racing controlling the front of the field.

“Tony (Martin) really is a special rider,” Alaphilippe said. “I was suffering behind him, he’s a huge champion. Today, it was a lesson of cycling for me and also good memories for both of us. We deserve that rest day. I moved on after my big disappointment from yesterday. It wasn’t easy but there are still opportunities to take until Paris.”

Rui Costa (Lampre-Merida) tried his hand at stealing the stage win from the rouleurs by attacking with 20km to go. The former world champion put in a valiant effort, although he never held an advantage of more than 15 seconds. The peloton entered the outskirts of Berne with 10 kilometres remaining and had to navigate around traffic furniture, giving an advantage to Costa.

The Portuguese rider was brought back into the fold with 4.5 kilometres remaining with the Swiss-based IAM Cycling team leading the peloton and BMC Racing positioned right behind. The tough finale awaited the riders.

The fast-moving peloton stormed onto the cobblestones with 2.8km remaining in the stage with IAM Cycling at the head of the race. The small uphill road with tight hairpins made positioning key on the climb. Sagan, Van Avermaet, and Vanmarcke were seen near the front, with Cancellara looming a little farther back — four riders who have been on the podium at the Tour of Flanders and Paris-Roubaix.

Navardauskas and Vanmarcke made a move off the front, but Barguil set a fierce pace on the front of the drastically reduced peloton, resulting in the duo not gaining much of an advantage.

Inside the final kilometre, riders elbowed each other to get into position and Cancellara was seen moving up on the right hand side of the road.

The Spanish all-arounder, Valverde, opened up the sprint, but was soon passed by the more explosive riders. Sagan and Kristoff went elbow-to-elbow down the center of the road with the Slovakian taking a stellar victory. Cancellara finished sixth.

“It didn’t work out,” Cancellara said. “But in the end it was very difficult to control, the best riders were at the front fighting it out. In the end, I was missing a little bit of strength but I gave it my all, and that’s the main thing. It’s special to ride in your own streets but for now, I’m more tired than anything else. I don’t like the heat too much, yesterday I lost five kilos. Berne gave us a nice finish. Tomorrow, it’s rest day. Maybe I’ll drink a beer. The wine will be for the end of the season.”

Van Avermaet, who won Stage 5 and wore the yellow jersey for three days at this race, finished 10th.

“It was hard to get in position but I was there where I wanted to be,” he said. “On the bottom the peloton hesitated a little as it was a bit too early to go I think, still 2.5km to the finish. So I waited and then on the top when I wanted to go the tempo was high so there was no point to attack there. We were just waiting for the sprint and I think I just tried to get into a good place but I never could get to the first row to sprint for first place. It was really good teamwork. Rohan Dennis did a really good job today and for us it was an important stage with Bern and Andy Rihs, our sponsor, here from BMC Switzerland. So we tried to do it as good as possible. Sometimes you win, sometimes you lose. I don’t think I could have gone better on this stage.”

Froome had an uneventful day in the maillot jaune, his 35th time wearing the coveted jersey. The Briton is now tied for fifth all-time on the list for most yellow jerseys. He leads Mollema by 1:47, with Yates 2:45 back.

“It was pretty fast today,” Yates said. “It took 50 or 60 kilometres for the break to get away. Everyone wanted to go, there were lots of attacks and I think we kept at 48 km/h all day long. So, yes, very fast.”

Rafal Majka (Tinkoff) kept his polka-dot jersey as leader of the King of the Mountains classification, and Sagan further extended his massive lead in the points classification. Martin and Alaphilippe were both given the award for the most aggressive riders on the stage.

On Tuesday the riders will enjoy the second and final rest day of the 2016 Tour de France in Berne. The 184.5km (114.6mi) stage 16 on Wednesday travels from Berne to Finhaut-Emosson and includes 3,750m (12,303ft) of climbing. The finish in Finhaut-Emosson is atop an hors categorie climb that is 10.4 kilometres long, and averages 8.4%.

Michael Matthews finished fifth in a tough final sprint while Adam Yates held on to the white jersey and third overall. Yates finished safely near the front of the peloton going into tomorrow’s rest day.

Sport director Matt White was happy with the performances and position of the team as they look forward to a well deserved rest day.

“It was a very fast stage today,” said White. “The tailwind helped out the breakaway which in turn made things a little more comfortable in the bunch.”

“We were able to work out relatively early which teams were looking to control things and that provided more respite than anticipated.

“It was a good effort from Michael (Matthews) in the sprint after a very nervous run in. There was more road furniture to contend with and lots of teams worried about getting caught the wrong side of the split over those two small final ascents.

“Adam (Yates) finished safely in the front group and after a great two weeks of racing so far we are looking forward to tomorrow’s rest day with the hardest days of the Tour still to come.”