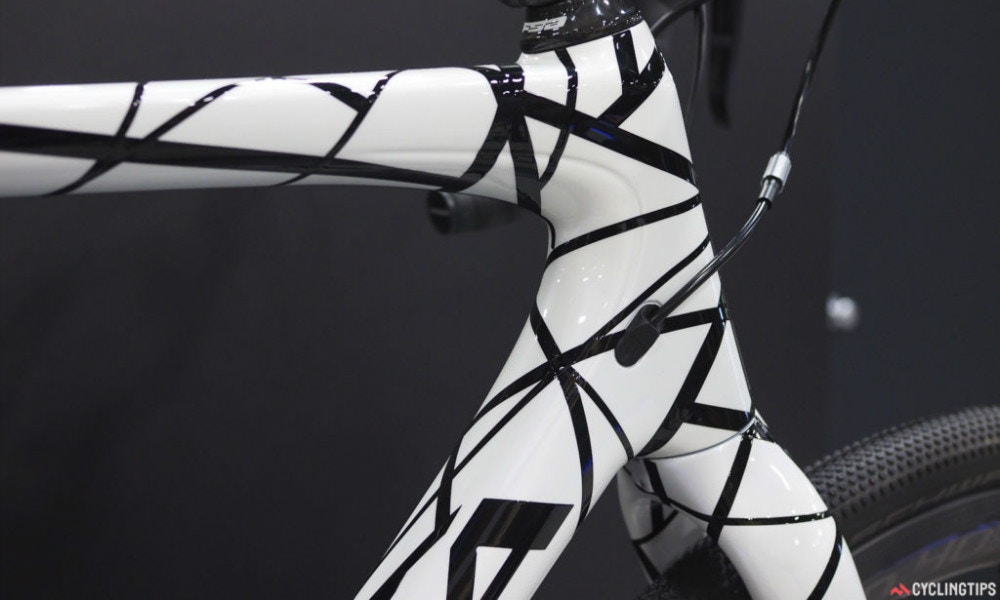 Europe has 'Eurobike', the United States has 'Interbike'. Held in Las Vegas every year, the bicycle trade show is the largest in the USA and gives manufacturers and brands the chance to show off their latest and greatest creations. If you weren't fortunate enough to be at the show, we've got the next best thing: CyclingTips were at Interbike covering the show live for three days, and we've compiled the best bits for you here.

There are several consistent and distinctive themes running through the bike industry at the moment; disc brakes on road bikes, wider wheels in all disciplines, and the emergence of the do-it-all bike. Interbike didn't disappoint in showing off a multitude of new bikes with such features.

Orbea gave a glimpse of their soon to be released gravel bike, the 'Terra', which has to rank as one of the best looking gravel bikes we've seen. The unique paint job is currently unavailable to the public, but the response has been so positive Orbea are considering making it available... at a price. The Terra comes with disc brakes, will accommodate mechanical and electronic transmissions, as well as single- and dual-chainring drivetrains and has extra wide tyres to tackle off-road riding. Further information won’t be available for a few months, but this is one to keep an eye on. Starting price will be US$3,000.

Orbea's flagship performance road bike, the Orca, received an overhaul for 2017. Now available in a disc-equipped version, it offers a hidden seatpost binder and exceptionally thin and flexible seatstays. It was a similar story for Argon 18, launching a new gravel bike plus equipping their road performance machine with a disc brake version. Argon 18’s Krypton XRoad is perfectly suited to dirt and gravel riding with stable handling, disc brakes, and more tyre clearance.

The high performance Gallium Pro road racer is now available with disc brakes, which sees the frame gain flat mount calipers and thru-axles. It's becoming clear that when (if) the UCI approve the use of disc brakes, manufacturers are ready to go. If it's not about off-road, it's all about aero. Bianchi is the latest manufacturer to release a slippery, super aero road bike with integrated cable routing, one-piece aero cockpit and aerodynamic tube shapes. Thanks to their Countervail technology the new Oltre XR4 is said to offer a smooth ride as well. The vibration cancelling technology has featured in the Infinito, Specialissima and Aquilla; but this is the first appearance on the Oltre, where it could be argued it's most needed.

As nice as the new Oltre XR4 is, we don't think anything could match the beauty of the Italian brand's throw-back style road bike. No prizes for guessing who owns the gold BMC, it's of course Olympic road race champion Greg Van Avermaet. The Belgian rode the BMC teammachine SLR01 to victory after surviving a hairy descent and holding his nerve for a perfectly timed sprint to the line. His bike is complete with Shimano Dura-Ace Di2 groupset, shallow-profile Shimano Dura-Ace carbon tubular wheels to tackle the climbing-intensive course, a 3T cockpit, and fi’zi:k saddle. As well as releasing a new partially wireless groupset, FSA have also released a power meter. In association the Power2Max, the power meter will feature independent left/right data, automatic zero offset, and a claimed battery life of 300-400 hours. Some say over analysis leads to paralysis, but Pioneer certainly don’t think so. Taking analytics to the next level, the Japanese company hope to build on its power meter offerings with these wireless sensors that are fitted to your shoes, seatpost, stem and helmet to capture movement and create a 3-D rider position and motion profile. The information can then be used to assess a rider’s aerodynamic profile, stability, head position, optimal power output and so much more. The extensive data is essentially an ongoing, real time bike fit system that can optimise your riding. Tech head heaven from Pioneer. Analytics in action providing everything a rider could ask for to analysis their position and make improvements.

There's no doubt the mountain bike world is responsible for a large portion of innovations we're now seeing in the road cycling world. Think disc brakes, 1x drivetrains and wider tyres, but could dropper seat posts be next? KS have designed a road specific dropper seat post that could soon appear on gravel and adventure bikes, and possibly even road bikes. The idea is by dropping the seat height, your centre of gravity is lowered making it easier to navigate through corners and technical terrain. There's also an argument of aerodynamics for fast descending. Watch this space... Helmet company Lumos has upped the ante on safety with a helmet with not only in-built front and rear lights, but also left and right turn indicators. Battery life is claimed at a respectable seven hours, with its rechargeable port found in the back of the helmet. Kali have created something reminiscent of RoboCop with their ‘Tava’ helmet. The dark charcoal, matte finish aero helmet will save you some watts but is equipped with equally impressive safety features. In built cylinders act like the popular MIPS system that allows some helmet rotation in the event of a crash. No word just yet on an Australia-standards approved version. Kask took things to the next level with two hand painted helmets that look more like a piece of art than a protective device. Japanese artist Noble Hardesty painted the truly unique designs on a Protone and Bambino that almost look too good to ride in. It's likely you're need to commission your own artist if you want such a product.

You’re not going to be missed in the latest climbing shoes from Lake. The super light and bright CX 301 is made from Clarino microfiber synthetic material, lighter than the traditional Kangaroo leather. A single BOA closing mechanism and a dual-layer, hollow carbon fibre sole further reduce the weight to an astounding 181g for a size 44 (claimed weight). Bont featured heavily at Interbike showcasing their new Vaypor G Gravel shoe, along with an updated Zero+ that borrows the Vaypor S' performance last and adds a vibrant range of colourways for 2017. Pearl Izumi had a couple of interesting developments, the main being a limited edition X-Project MTB/CX shoe that will help raise funds for the Amy D Foundation, a young cyclocross racer who was tragically killed while training two years ago. US$100 from each pair sold will go directly to the foundation. This article is a modified version of that originally published on cyclingtips.com Check out the best of Interbike from Day 1, Day 2 and Day 3.