Meet the Team Behind the LTCC 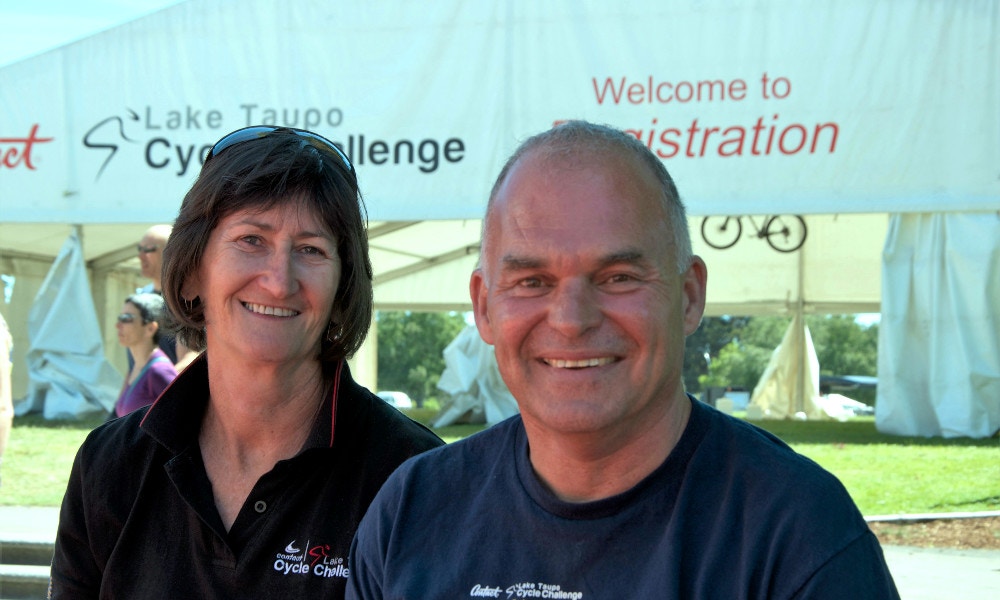 We’ve been excited to ride the Lake Taupo Cycle Challenge for a while now. Having recently made it round in one piece, we decided to find out a bit more about the people behind NZ’s premiere cycling event; the people who organise the spot prizes (but never win them); the people who make sure everyone is safe out on those roads; the people who were hard at work while we were, well, playing hard.

We caught up with Event Director, Kay Brake, and Sponsorship and Communications Director, Hayden Dickason to find out more about the event, what goes on behind the scenes, and what we can expect next year for the 40th anniversary of the LTCC.

When did you first get involved with the Lake Taupo Cycle Challenge Kay?

It was back in 2008. I came on board as Administration Director and then in 2011 stepped into the role of Event Director.

Have you always had a connection to cycling?

Not necessarily cycling, I’m more ‘recreational everything’ – definitely a sporting background, and business as well, which is what was really needed at that particular time.

What sports are you into yourself?

Tennis, hockey – I do a bit of cycling, more trails than road though.

And what’s kept you coming back to the LTCC all these years?

The buzz and excitement of the event…and in a little town like this, it’s just such a cool thing to be involved with because the community is a real stake-holder in the event. Obviously we are small, but we have a large number of volunteers: over 800 from a community this size is a significant proportion of the people who live here, so they buy into the event, which just makes it so much more rewarding. And the fact that we are a charitable trust and that any proceeds from the event get distributed back into the community means it’s a real win-win — everyone feels a bit of ownership and pride, real pride. Well the support that you see around the lake is amazing, you know the locals getting out and cheering you on from their front gates as you pass by…

Yeah and all the participants who come as well, and the stories that we get from the people who come and do the event is just awesome; particularly the ones who see it as a real personal challenge. And it is a challenging course, 160km, and it’s amazing to see the generations keep coming back.

We heard one story earlier about a guy who has done our event for the last 28 years. Any memorabilia from the event – his bib, the welcome guide, one year we gave out a chocolate medal – goes into a box. He has a box full of memorabilia for each year – 28 boxes! Stories like that make you think ‘wow, that’s awesome’.

Hayden, what’s the biggest change that you’ve seen since you first got involved with the event?

I’ve been with the event for four years now. Since then we’ve introduced a couple of new categories: the half-lap 80km option was a fantastic introduction to the event last year, and I think it’s an event category that is going to grow. Bringing back the Friday night Criterium and entertainment has been a good call for us. Seeing the streets lined with spectators on Friday night – it’s a really great way to the set the tone for the start of the weekend. We had a gap year last year with the crits, and to have it back I think is fantastic. We now have a really solid team working on the event throughout the year leading up to it. We have a core of 4-5 members that have been working on the event for the last four years now – of course that team swells with the number of volunteers getting involved leading up to event time. I think the stability of that team has made a difference in terms of the running of the event: we all know what we need to do, we know each other’s strengths and weaknesses, and that has brought a bit of finesse to the event in terms of the way that it comes together.

Kay, in terms of organisation, what goes on behind the scenes that competitors just don’t know about?

One thing that people probably don’t realise is the amount of work that we do to make the roads safe, specifically around traffic movements. Because we use State Highway 1, we do a significant amount of liaison work with NZTA (which is the governing body that looks after New Zealand’s roads), with the Automobile Association, with the Truck Driver’s Association, to make sure that most road users know that the event is happening and to minimise the number of vehicles on the road.

And it’s a mutual arrangement as well because the last thing a truckie wants is to come across 8,000 cyclists on the road.

Yeah and until you see that, you don’t really understand the scale of the event, and appreciate what goes into it. That’s something that is really unique about this event, the fact that we do start in Taupo and finish in Taupo, even if you are participating in the relay… See also: Meet some of the riders participating in the LTCC 2015

How do you prepare for things that are out of your control, i.e. the rain that we have had?

Hayden: In 2012, the week leading into the event, Mount Tongariro decided to vent – so we had a small hole in the side of the mountain, a very small eruption, and you can actually see that it is still venting sometimes even now.

That is a really good thing! Because we already had very stringent safety contingencies in place, an eruption makes you look at those plans and look at them in detail. We’ve never had so much media coverage actually, we were headline news for three nights in a row – ‘What are you doing this weekend?’ they read. Mt. Ruapehu famously blew it's top in '95 - here's hoping it keeps it on for many years to come...

I’m not sure there are many cycling events in the world that need to plan for volcanic eruptions…. Hayden what was something that was special about the event this year?

Hayden: For me it had a really nice vibe to it this year. I think that could have been because the weather forecast wasn’t very good, and I think everyone came prepared for that and were pleasantly surprised that the weather wasn’t as bad as it potentially could have been.

The other thing is just a couple of the stories that came through this year. We’ve been following, in particular, a team called the Chain Gang. They are the perfect example of our riders being predominately non-competitive. The husband had an accident a number of years ago and significant operations. He took the family out to do the accumulator, which is the event category where someone does the full lap and picks up a team mate at each point around the lake and they all finish together.

And the story of Talia Faith who has her own health challenges and went out and raised the most funds for Heart Kids NZ, that kind of stuff is amazing to see.

Kay: We had some awesome finishes to the race categories as well. With the men’s elite race, after 160km, it’s great to see it come down to a sprint in the finish. And Dion Smith will be wrapped because Aaron Gate is well known for his sprinting ability.

In the women’s race we had the whole bunch coming cross the line with mere seconds between the riders in the top 11. We’ve seen some seriously impressive riding over the weekend. What about next year Kay, it’s the 40-year anniversary of the Lake Taupo Cycle Challenge, can you give us an idea of what to expect?

We have already started working on next year. There will definitely be a few more festivities going on, some extra rewards for our riders. We are working with the local museum here just by the Great Lake Centre: there will be an exhibition celebrating the history of the event which will tie in with registration, sending riders over to experience some of our history.

Hayden: We’ll be talking to our mate with 28 boxes of Memorabilia… We are looking forward to it being a real celebration, you know that’s the emphasis that we want to put on it next year.

Kay: Yeah, a celebration…inviting everybody to be a part of our history.