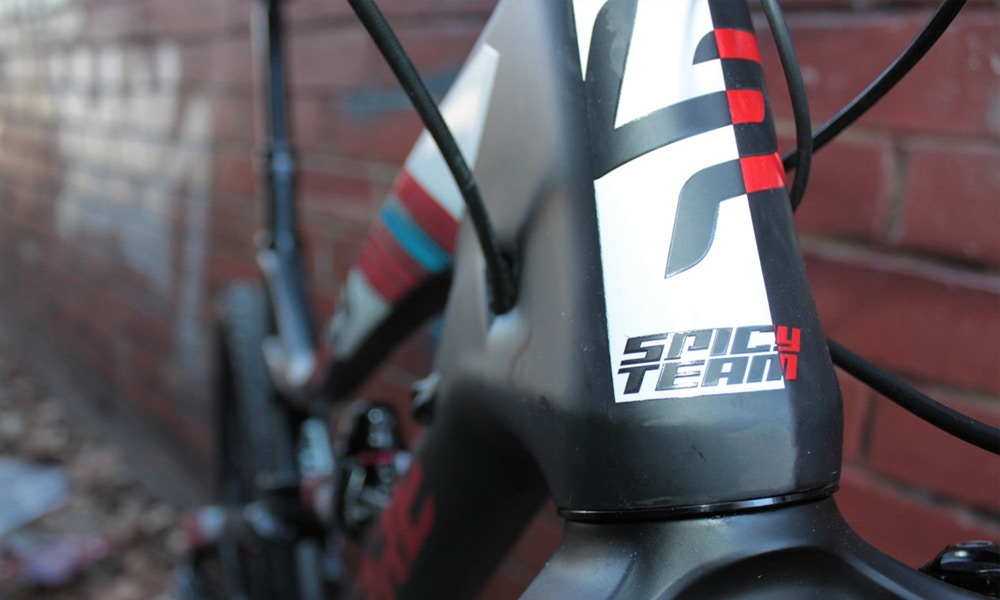 On a warm winters evening not so long ago, my perspective on mountain bike riding changed quite considerably. After a lifetime of riding bikes, I guess I never saw the day coming.

Let me spare you the drama and introduce you to the 2015 Lapierre Spicy Team.

The latest iteration of the popular model has gone and raised the bar... significantly. Not familar with mountain biking? Don't worry we have you covered

I don't know how much my large test bike weighed, nor do I care. If you said it weighed 12kg, I'd be forced to tell you it rides like a 10kg bike. With 160mm of travel up front and 150mm in the rear I was concerned this would be far too much bike for my liking and definitely too much for the very XC orientated trails I was about to ride.

The 2015 Spicy Team is equipped with Lapierre's updated (and clever) E:i Auto Shock System, which is easily one of the company's biggest assets. Even with the teething problems of the earlier system, you'd be game to debate the technology and its intentions.

The Spicy is the perfect platform to showcase the refined system and it effortlessly exceeded all expectations. Without starting any arguments, I doubt there has ever been a 160mm bike which genuinely pedals well, until now that is. Even though I tested the bike over a variety of natural terrain, the biggest surprise for me came on the fire road climb into the trail head. The E:i system was whirring away and I could barely believe the bike was riding the way it was. If you have any kind of commute to and from the trails, you'll never be worried again. It just works. The carbon monocoque frame is stiff, but it never feels harsh. The enormous rear stays ensure the power is being transferred directly to the ground and keep things going in your chosen direction. The Rock Shox Pike and Monarch RCT3 are a match made in single track heaven. I'm sure you've all heard enough glowing reviews of the Pike and rightly so, but the new Monarch is worthy of the same praise. The system is so dialled from the get go that you'll barely even notice it's there. That's definitely something I'd say this bike can hang it's hat on. I'd throw myself into corners harder, hit rocks and roots faster and I know the bike was begging for more.

As you'd expect from a top of the line wonder bike, the componentry is spot on. XX1 is probably my single favourite upgrade in all of my riding life. It works and it shaves mountains of weight. What more could you want?

The Black Box carbon bars are one of the nicest handlebars I've used, but I understand how personal cockpit setup is and so I'll let you decide.

I struggled to notice the Sram Rail wheels, which is surprising given the frame does not budge. I expected a bit of flex and was pleasantly surprised. Get your Lapierre Spicy Team Now!

The Reverb Stealth seat post is pure class, its action is smooth and fast. Unsurprisingly, this seems to be a common theme with this bike!

On the trail the bike feels feathery light, it springs forward with unwavering acceleration and poise. Absorbing rocks, roots and drops with ease, I could not get enough. Very rarely do you have a ride where you never want it to end, but this was that day. I was begging for steeper and rougher terrain. A simple change in bike might not make you a World Champion, but this one will absolutely make you feel like one.

For a bike of this category to perform the way it does on climbs and flatter terrain, I'm finding it hard not to clear the shed and make this my one bike for all scenarios. Every year the industry mentions the closing gap between XC and gravity orientated bikes and every year I laugh it off. I've now been convinced the gap is actually closing and I genuinely don't know how much longer my trusty XC steed will survive.

If I were desperate to find any negatives, I'd say that tight uphill switchbacks weren't as comfortable as other bikes I'd ridden, but in the end this isn't designed for climbing with the XC crowd. The bike also came equipped with a Maxxis Minion front and Ardent rear, the latter of which I would get rid of immediately. Again, personal preference.

Lapierre and Nico Vouilloz have absolutely hit a home run with this bike and I can't possibly see anyone being disappointed with it. If you can manage the price this kind of quality attracts, then you'd be very hard pressed discounting this as your first choice.

See Also -The Word from Your Local Mountain Bike Stores