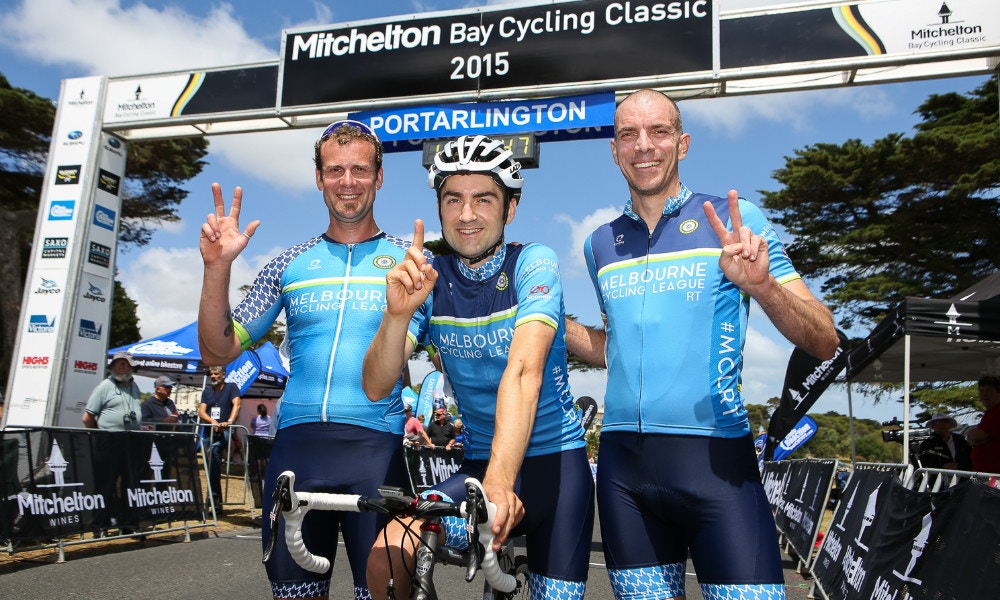 It might be hard to find a link between a 3-1 Chelsea loss in the UEFA Champions League, and one of the most forward thinking, fresh cycling clubs in Australia, but out of that heartbreaking Chelsea disappointment came the name Melbourne Cycling League.

Melbourne Cycling League was born in 2014 after good mates Dan Wilkins and Andrew Gooding saw a gap in the market for members of traditional cycling clubs.

The League is all about collaboration, and its founders have a very genuine goal to grow the sport of cycling and increase participation and enjoyment. Anyone who follows the club on social media will be in no doubt of their commitment, regularly posting on their own channels to promote their inclusion based model for racing.

To say it’s unique to find an organisation that is more focused on ’we’ as opposed to ‘me’ is an understatement.

We caught up with Melbourne Cycling League co-founder, social media aficionado, donut connoisseur and ‘elite’ rider on the comeback trail Dan Wilkins, to chat about MCL and the Chelsea heartbreak. How did Melbourne Cycling League begin?

Melbourne Cycling League started in 2014. Andrew and I felt the traditional structure of cycling clubs left a gap in their offerings to members. We felt that being involved in a cycling club shouldn’t be all about racing, that there was that pivotal missing link between the social and competitive side of cycling.

We thought to really build this ideal club scenario a new entity had to be created. So we did.

We started in May / June 2014 with the idea of value adding to members, but not necessarily through racing. As well as a traditional membership, the club has a social membership which we put as much effort into developing as any other part of the club.

In a short space of time we’ve had some really great people get on board, people who believe in the brand and believe in cycling.

See also: We step you through the reasons why you should get involved with your local cycling club and start racing.

Tell us more about the social membership

There are so many quality racing options available. We didn’t want to dilute the pool and run weekly races. Our goal was to create a number of ‘special’ events on and off the bike, offering something to those people who love cycling but are not necessarily into racing.

We created a social membership that is open to anyone, including those from other clubs. You don’t have to be a fully-fledged member of Melbourne Cycling League to take advantage of our social calendar.

The club has teamed up with Pitcher Partners, putting on a range of social events in late 2015 and into 2016. These include wine tasting nights, Q&A nights with some notable cycling/professional people, to more cycling specific events. This month, we’ve managed to get a VIP area at the Austral / Madison Championships on December 19. With that we’ve included a competition offering members a chance to ride with Shane Perkins on the morning of the event. We also try and ensure all events are free to our members - we think that’s really important. What events are Melbourne Cycling League involved with?

We try and mix things up from the traditional.

We’ll have an increase in races at Caribbean Park in 2016. In a couple of weeks we have the Anchor Point Melbourne Kermesse Championships. We’re running both Elite and Masters events, with Southern Masters Cycling Club coming on board as well.

In 2016, we’re working with Geelong Cycling Club to host a twilight crit series on the Bellarine in the New Year, a number of winter CX races and a few more very cool events in the pipeline (if they come off they will be pretty sensational!)

The club also has ride days with the focus on going places to which people might not typically ride. The rides are open to everyone; you don’t have to be a member of Melbourne Cycling League.

See also: Improve your performance on the bike with this easy 'how to' guide for the foam roller

And we get behind club members as well as local guys we believe are doing great things. A couple of examples are Nick Bensley and Drew Ginn.

#Ginn24 – That came about after a semi-throwaway line at one of the club social events by one of his Oarsome Foursome buddies James Tomkins. From there it became real pretty fast and the resulting effort was not only mind-boggling (836km in 24 hours!), it went pretty viral on social media which helped drive the Tour de Cure fundraising effort and resulted in over $40,000 fundraised. Massive on several fronts.

#Benshour – For those who don’t know Nick, he’s an incredible athlete. Top 10 at Nationals TT – regularly the first ‘worker’ behind all the pros, he finished Hawaii Ironman this year in just over 9:30 hours – so you know where he’s at. Having said that, earlier in the year all the talk was about the Hour Record. Nick wanted to give it a go and we happily obliged to help him out. DISC was a great venue to hold it at, local and the home of track racing here.

NOTE: You don’t HAVE to go deep into the hurtbox to get us to help you out… but it is fun… for us. Fair to say MCL has some heavy hitters in the ranks. Can you tell us about the star-studded Masters Team?

Ha-ha, yeah the Masters racing team is pretty stacked! I can’t even get a look in!

We have a number of members who joined for a range of reasons. Some include Steele Von Hoff, Josie Simpson, Pat Lane, Chloe Baggs, Jo Cooper, Oscar Stephenson, Drew Ginn and James Tompkins.

Not to be forgotten are those who have established fantastic value adding components to the cycling fraternity, people like Anna Thomson, Co-Founder of Fondo and Steve Waite from AWS Cycling

With regards to the MCL masters racing team, that grew very organically. As a club, we put no pressure on the guys to race. However, we are lucky they are more than dedicated, popular in the local cycling scene and have very understanding families who let them ride ALL THE TIME! Big ups for winning the 2015 VRS Masters A Grade Team title in 2015+ Andrew Stalder taking out the Overall in the same category.

See also: Check out our review of 'Sweat. Think. Go Faster.' A book written by Darryl Griffiths, the founder and CEO of Shotz Sports Nutrition

You’ve also partnered with the Trek Fondo women’s racing team, tell us about that.

Yeh, they’re fantastic. Women’s cycling is in a great position leading into 2016 – but it’s time to invest a little more – time, money, effort – to ensure it rises to that next step.

The Fondo brand is brilliant – incredibly engaging and community orientated. When Anna (Fondo) approached us we had no other answer than ‘absolutely.’ We have little to do with the day-to-day running of the team, they’re an organised bunch of people – but as far as spreading their message across our channels and connections we’re only too happy to help out where required. Again, they’re a great group and a real testament to where women’s cycling is heading in the future. What does the future hold for Melbourne Cycling League?

There’s no end goal for us. What I mean by that is, this club is a constant evolution of what our members and the cycling community want. We don’t do what Andrew and I want, we listen to our members no matter how ‘out there’ their desires are. The community is far bigger and more important than any brand club could ever be, and we are well aware of that.

We feel a paradigm shift in the way clubs and its members interact. And we’re happy to be a part of that.

Who is Dan Wilkins?

I started riding a bike seriously about 10 years ago as a way of getting my fitness up after I finished playing football.

Two of my mates opened a bike store and I grew to love it after meeting some really great people through which I was very fortunate to be offered some great opportunities. Cycling enables you to meet people from all walks of life who have a common bond to the bike, that’s what keeps me coming back to cycling.

I’m also lucky in that my job in advertising/marketing requires me to be pretty creative. Naturally, that applies to MCL as well - it’s quite entertaining thinking of stuff that hasn’t been done yet, or how you can offer existing products in a new light.

Who is Andrew Gooding? And where did he get that amazing custom MCL bike from?

He works in marketing, or finance, or the cycling industry – I’m not sure even he can articulate what he does to pay the bills, but it probably involves a few of those things. He’s certainly passionate about cycling and the broader culture that surrounds it. The MCL bike project came about after he crashed and damaged the frame requiring it to be repaired and re-painted. He worked on the bespoke colour scheme in conjunction with the Benny Johnson from Johnson Bikes, and what they came up with is pretty special. Sun Graphics did the paint job and to see the frame up close is to truly appreciate the quality of the workmanship.

He gets plenty of comments on it from strangers he encounters on the road, most of whom wouldn’t even know the connection between the bike and the club. He pretends to be all coy about the attention the frame gets but I’m pretty sure he’s giving himself high fives in his mind with each comment.