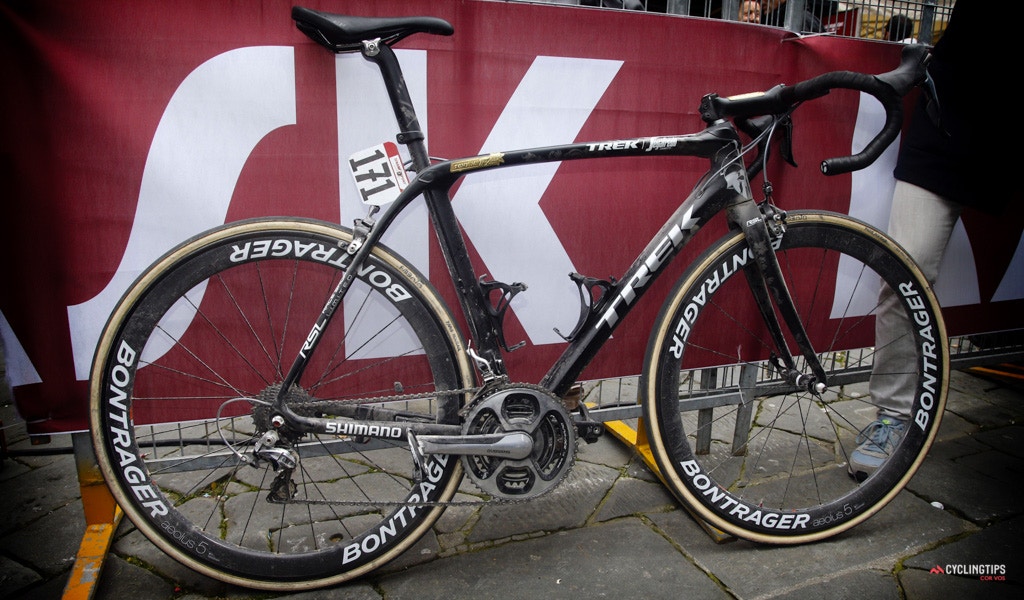 Cancellara’s bike doesn’t look all that different in profile at first glance but make no mistake; there are some radical changes incorporated here. The 2017 Domane still uses the company’s innovative IsoSpeed ‘decoupler,’ a mechanical pivot at the seat cluster that allows the seat mast and seat tube to flex much more under load than traditional fixed joints. And like on the latest Madone, Trek appears to once again be using a novel double seat tube arrangement that allows for more saddle movement under load than on a more conventional single-tube setup.

Whereas the Madone’s dual seat tubes are nested one inside the other (thus allowing for a deeper, aero cross-section on the outside, but a slimmer and more flexible profile on the inside), this new Domane has its seat tubes stacked on top of each other. The forward tube is rigidly attached to the rest of the front triangle, but the rear tube is basically just a flat leaf spring, moulded as one piece with the integrated seat mast up above.

Visible just above the front derailleur mount is some sort of insert in between the two tubes. Given the graduations marked on the frame, it seems that riders will be able to easily tune the ride quality of this latest Domane by raising and lowering that insert, which would effectively alter the spring rate for firmer or softer feel, respectively. ISOSPEED UP FRONT, TOO?

While the previous Domane was remarkably smooth out back, the ultra-rigid front triangle made for a distinctly unbalanced ride. From what we’re seeing, however, that may be remedied for Domane 2.0.

It’s impossible for us to tell exactly what’s going on, but there does appear to be some sort of mechanism tucked away inside the head tube on Cancellara’s bike, just beneath the upper headset cover. Trek has already dabbled with variable steerer tube shapes in an effort to create a softer ride, but would the Wisconsin company be so bold as to take that concept even further? Or is there actually some sort of mechanical pivot in there similar to what Trek does out back? Unfortunately, we’ll have to wait until Trek officially launches this bike to find out, but something innovative is going on in there. It’s impossible to see what’s inside the head tube, but it appears that Trek has figured out a way to boost the ride quality up front via some sort of mechanical device. Photo: Cor Vos.

Other details are thankfully a little easier to pick out. The rim brake version of the new Domane will switch to direct mount callipers and sticks with quick-release dropouts front and rear, although the latter now look to be hollow (and possibly even moulded as one piece with the stays). The fork once again uses the original version’s dramatically forward-swept legs, and in the name of versatility, hopefully Trek has still incorporated the original bike’s hidden fender mounts.

What Trek has done with the Domane’s frame geometry is more of a mystery. The original version’s rather upright riding position was admittedly well received but nevertheless, a more aggressive option would be welcome. Trek has obviously already cut moulds for the longer and lower frame used by Cancellara and while they’ll ultimately be offered for sale through Trek’s Race Shop Limited program, they’ll still be frustratingly rare.

Either way, we expect more complete details to emerge in April before Paris-Roubaix. Stay tuned.