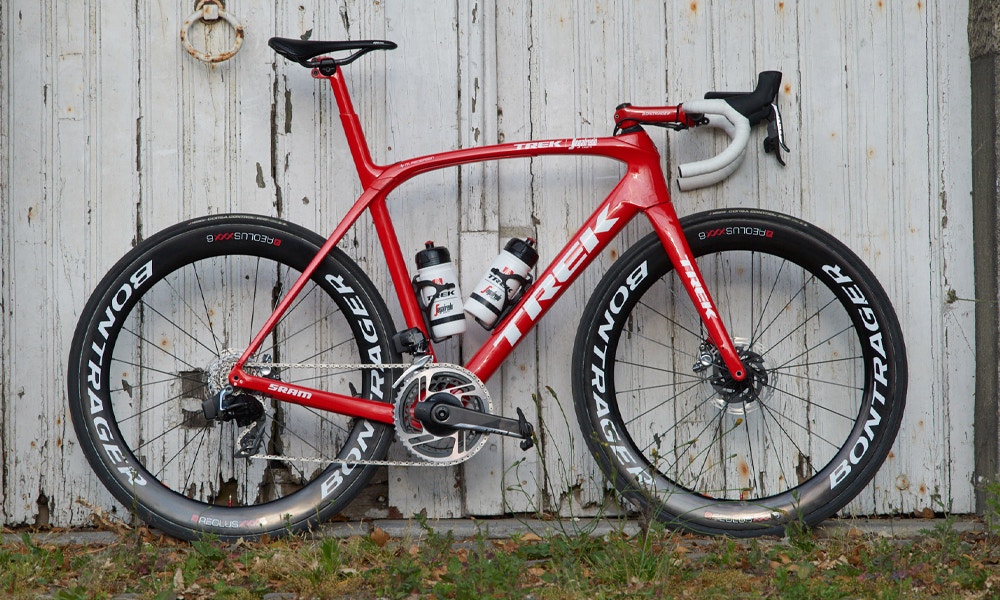 More comfortable, sleeker and said to be faster in the real world, Trek has unveiled the latest iteration of its endurance road bike platform, the Domane. Boasting integrated features, room for bigger rubber, more versatility across the board, and a hint of aero, the Domane is said to be the most refined endurance bike the American outfit has produced. So with that in mind, join us as we take you through what to know about the 2020 Trek Domane. 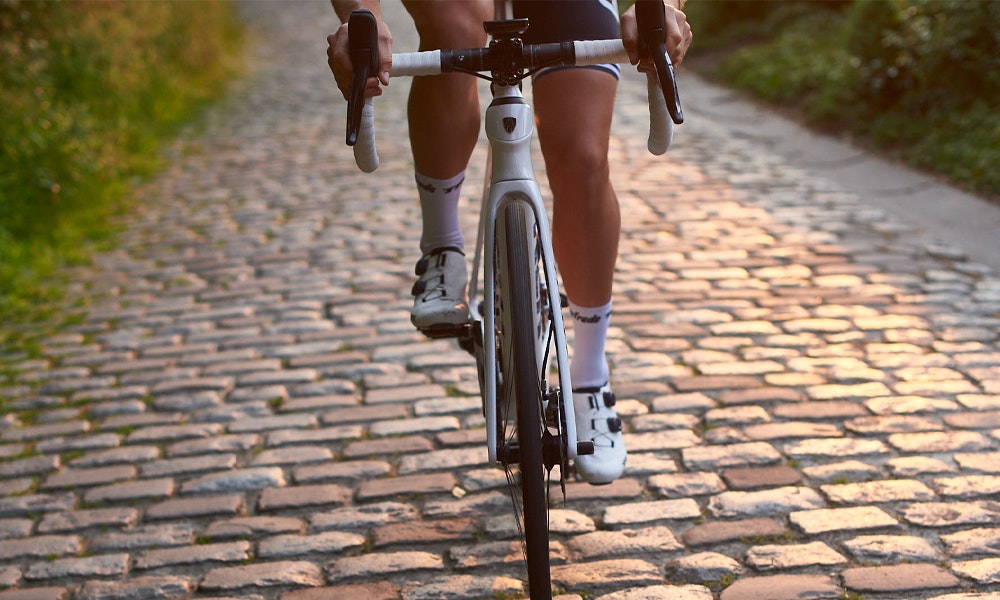 First released back in 2012, the Domane was revolutionary thanks to its IsoSpeed decoupler. IsoSpeed has been proven to minimise road buzz, and most importantly, smooth out the jagged cobbled roads the imperious Fabian Cancellara was traversing in his prime.

In its second iteration, IsoSpeed expanded, with the elastomer tech moving to the front end of the bike. In our 2017 review we praised the tech for its seriously smooth ride and impression handling characteristics. For 2020, rather than revolutionising its endurance platform, Trek has evolved the Domane, refining its shape, handling and comfort while adding versatility to suit modern needs, after all, if it ain't broke...

As before, the Domane will be available in both SL and SLR level framesets, with the latter featuring a higher quality carbon fibre lay-up that's said to be both lighter, and more compliant. Frameset weight is said to tip the scales at 1,335 grams with the SL frame weighing in just 30grams heavier. That includes the entire frame, seatpost, and fittings. Disc brakes are again standard, with no rim brake models featuring in the product line-up while the aluminium frameset options of old have gone the way of the dodo. There are 9 sizes on offer across the board, with a single unisex fit offered, meaning WSD (women's specific design) geometries are no more. 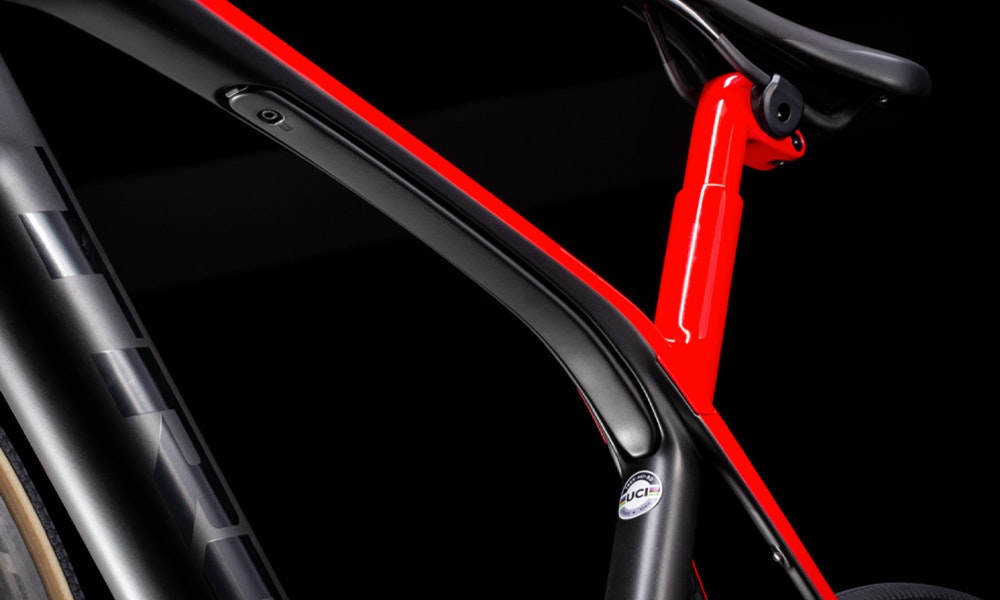 Further increasing comfort is the updated IsoZone and IsoCore handlebar pads which are said to reduce road buzz by 20% compared to standard bar tape. This reduction in road buzz is said to aid in wrist fatigue on long rides and improve overall comfort.

While the aesthetic of the 2020 Domane is refreshingly different from the recept crop of dropped seat stay, sloping top tube lightweight aero road bikes that have recently hit the market, Trek has still managed to squeeze some aerodynamic features onto its endurance road machine. The frame shapes are the main benefactor, with every tube tweaked to be more efficient in the wind. While up top, the cabling has been tidied up around the headtube, making for a cleaner aesthetic. All told Trek claim that in back-to-back aero testing compared to the outgoing model, the new Domane will cover the same distance as its predecessor in just 59 minutes. While a minute over an hour may seem marginal to some, that's a minute sooner you'll get to the coffee shop which is a win by us. 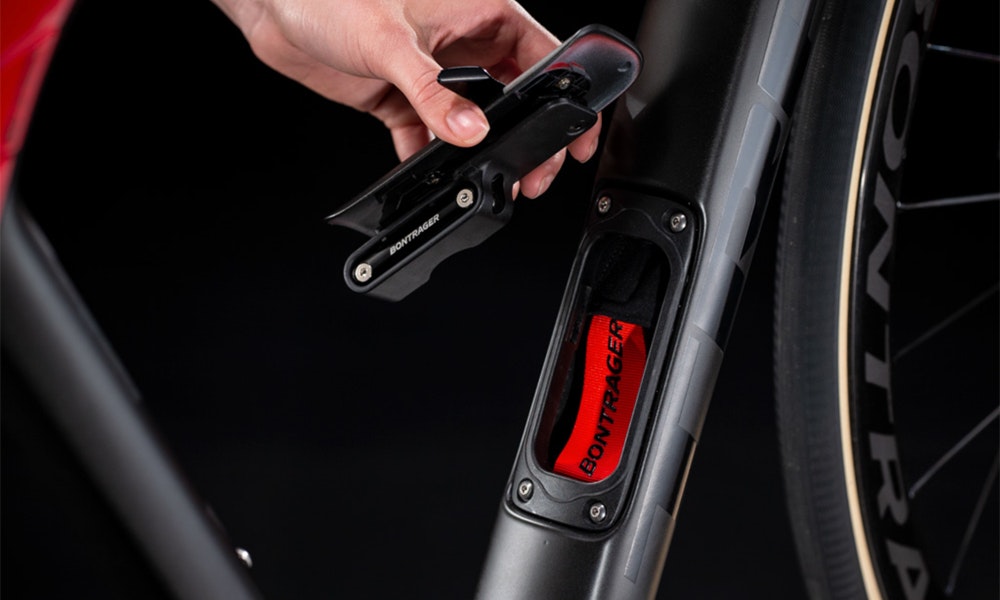 Integration is king at the moment with most, if not all road bikes unveiled by the top brands in the last 18-months boasting a host of integrated features. With the Domane, Trek is no different. The cabling for one is internally integrated through the bars, running alongside the stem before entering the frame just behind the headset. Trek claims that this reduces drag, increasing aerodynamic efficiency.

In the downtube, a removable plate exposes a cavity for riders to keep their ride spares and aids in consumers threading the shift and brake cables through the frame.

Finally, Trek has done away with the seat mast topper as used on previous models in favour of a semi-integrated unit across both its SL and SLR level framesets. 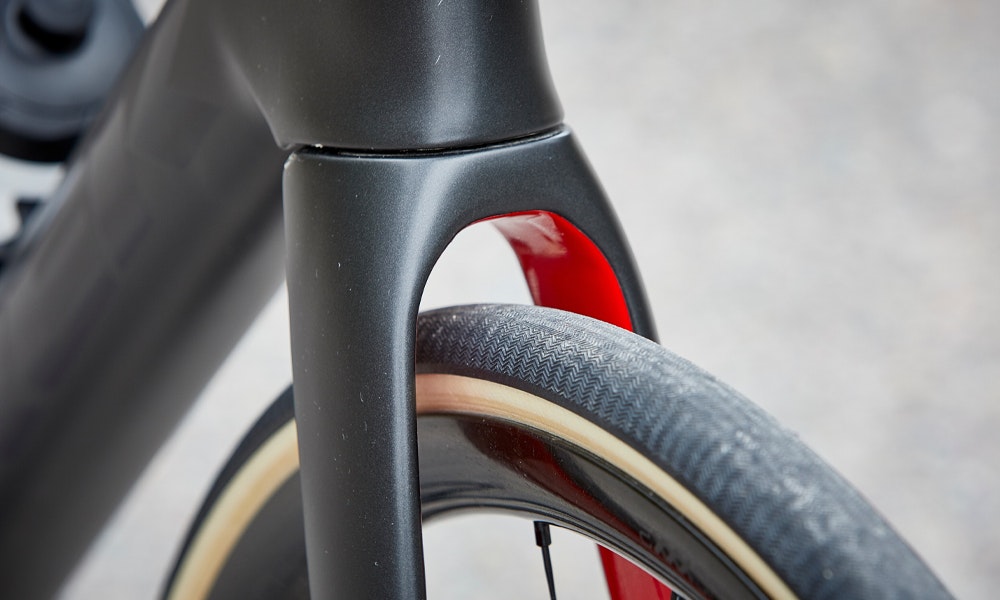 For 2020, it's clear that Trek is aiming to broaden the scope of the Domane and the terrain it thrives on. All bikes in range ship with 32mm wide tyres as standard with the frame said to swallow tyres up to 38mm both front and rear. Hidden fender mounts also feature front and rear, adding to the versatility. It's worth noting that these mudguards are proprietary so they're unlikely to be compatible with the full range of fenders on the market.

6. Return of the Threaded Bottom Bracket 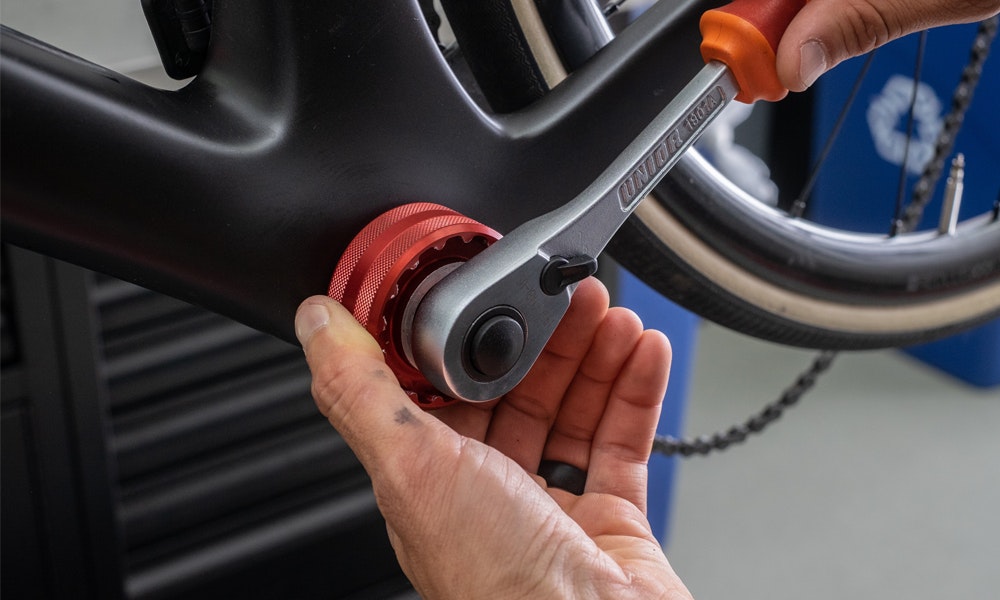 Much to the pleasure of bike mechanics and purists everywhere, Trek has ditched its PF90 press-fit bottom bracket standard in favour of a T47 threaded bottom bracket. Threaded bottom brackets are preferred as they're largely set and forget components, unlikely to creak at the sight of excess, dirt, dust and road grime, and easy to service.

The 2020 Trek Domane is said to hit local shores in the coming months, check the Trek website for more details.

At the time of publishing only the Australian 2020 Domane SLR range has been confirmed, we'll update this article when we have more details at hand. 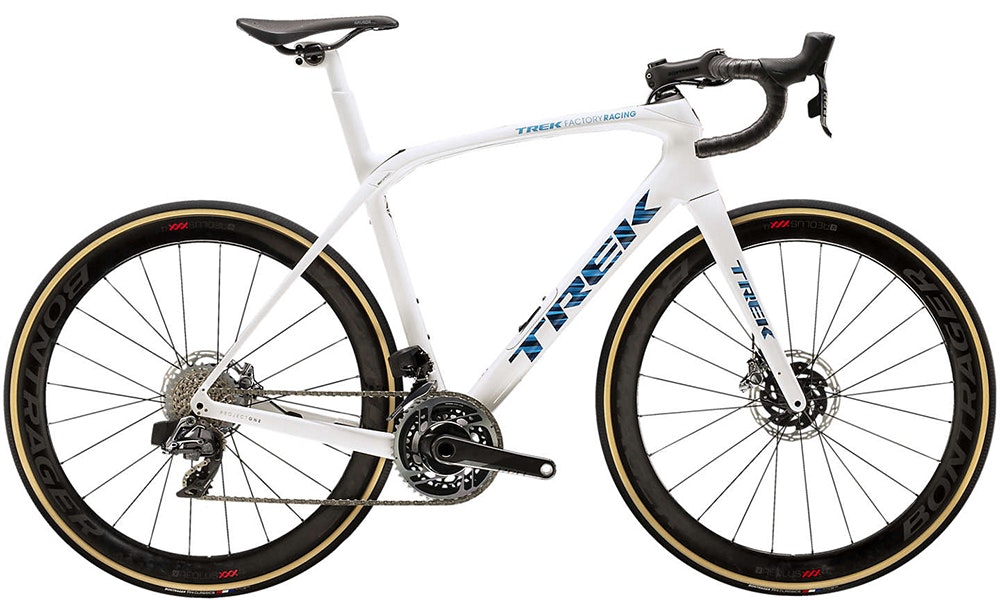 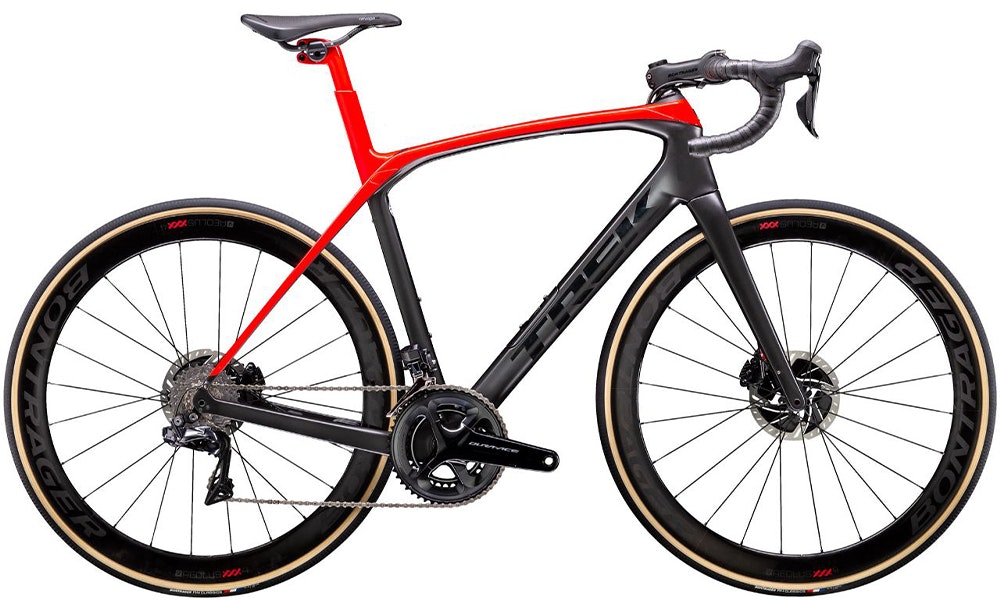 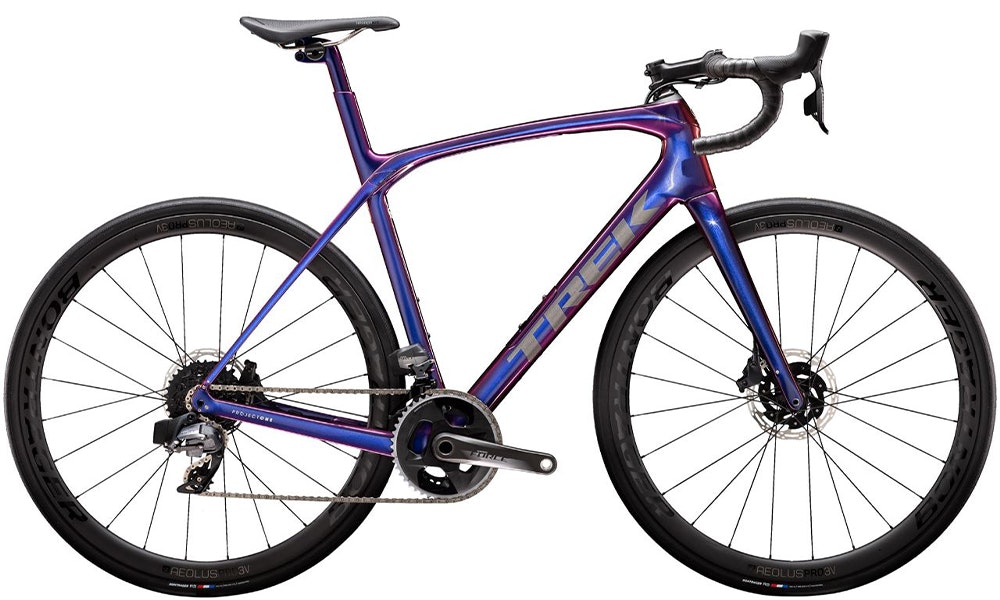 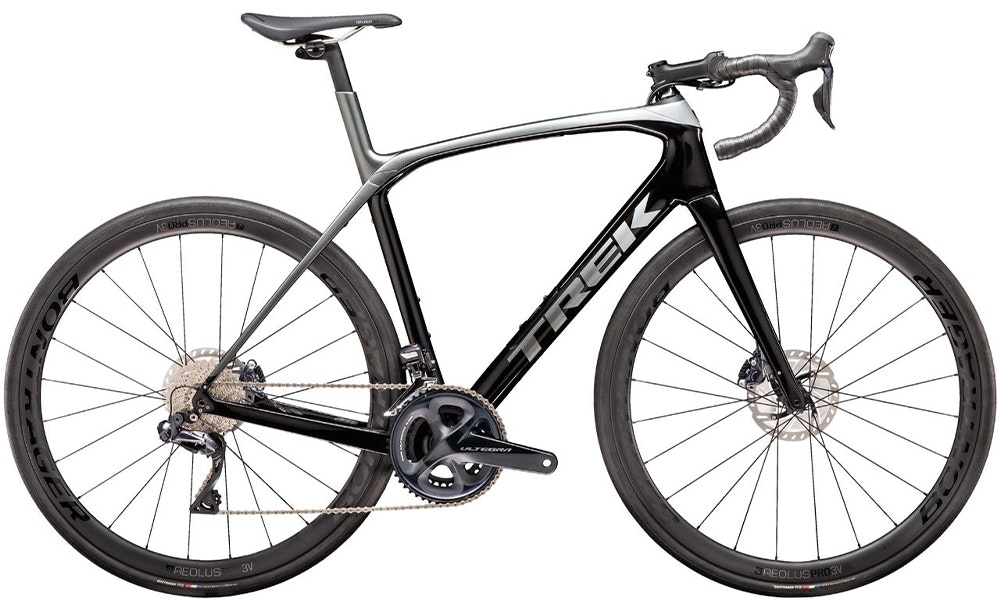 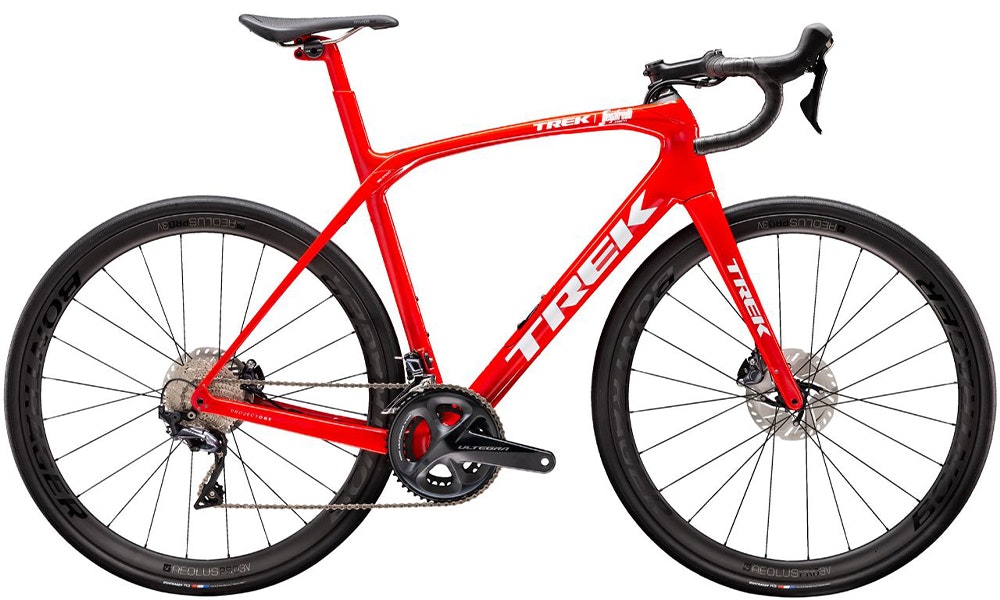 With the 2020 Domane range so near, right now is a great time to pick up a deal on an outgoing model Domane. Check out the wide range on offer from leading retailers across the country right here, at BikeExchange.