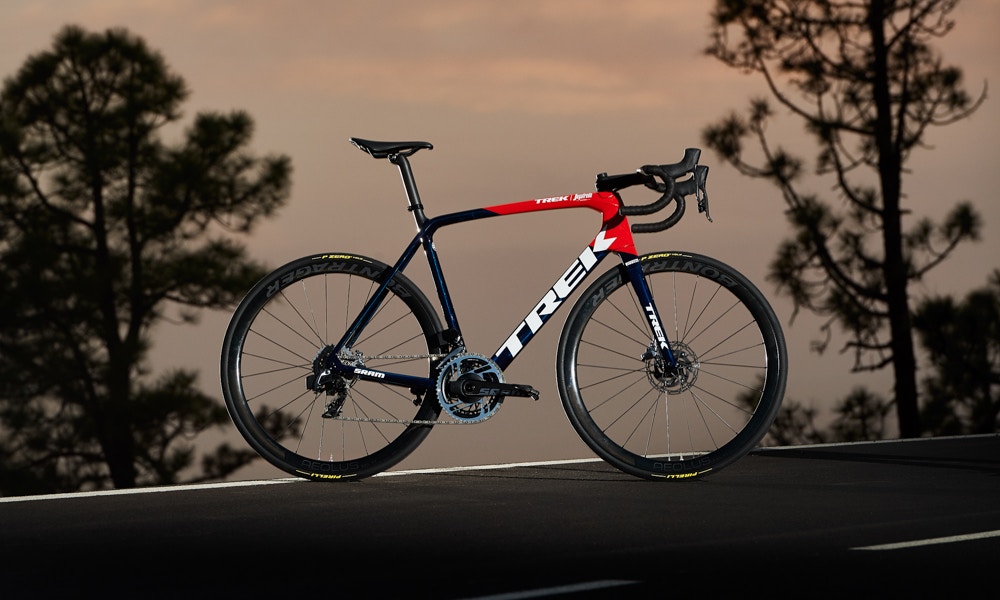 Almost three years to the day after announcing the second-generation Emonda, Trek has pulled the curtains back on the latest iteration of it's climbing focussed road bike alongside a host of new carbon wheelsets.

Disc-specific, available in two frameset levels, more aero than ever and just as stiff as its lightweight predecessor, join us as we take you through everything you need to know about the overhauled 2021 Trek Emonda. 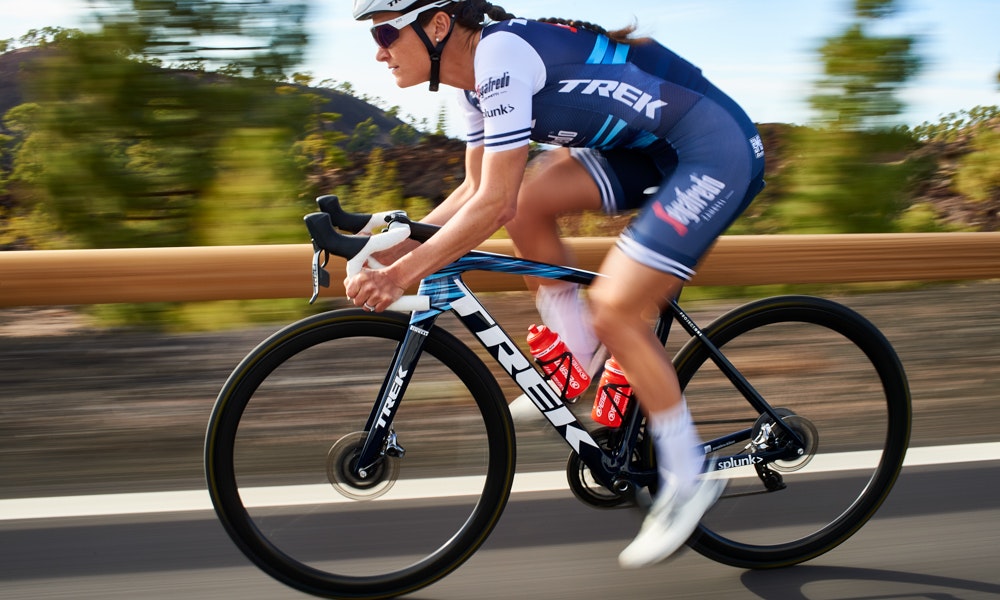 At a glance, the casual observer would be hard-pressed to spot the differences between the MY18 and MY21 Emonda, however, take a closer look and there have been some considerable changes made across the board. From overhauling the tube profiles, cleaning up the front-end, to debuting an all-new carbon lay-up there's plenty of evolution at play here. While several small tweaks and changes add up to somewhat comprehensive overhaul, the new Emonda is one of the very few big bike companies to forgo dropped seat stay, instead opting to retain it's somewhat classic double-triangle aesthetic. 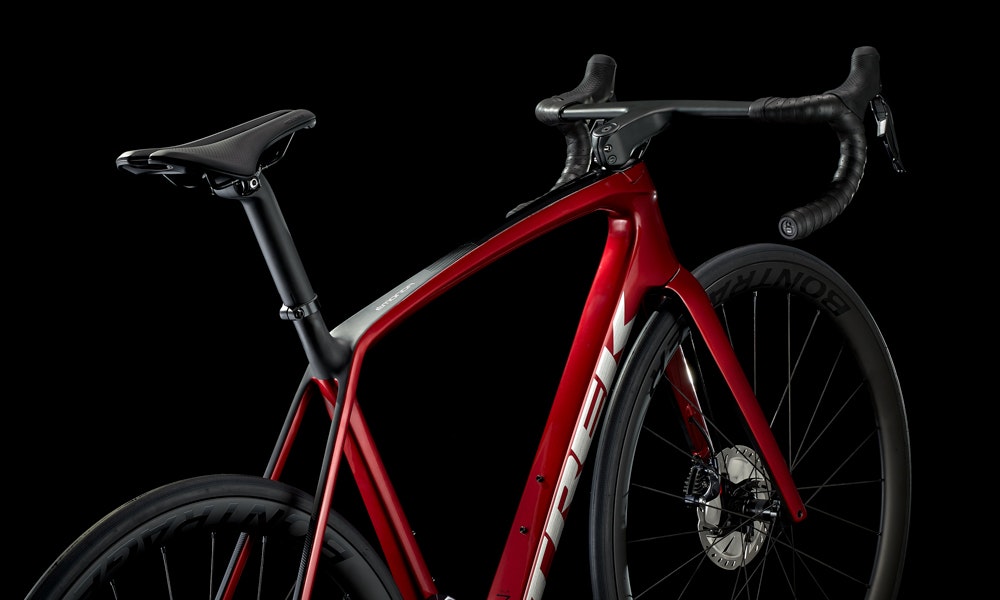 While the Emonda isn't stepping on the toes of its aero orientated sibling, the Madone, the latest Emonda is outfitted with a host of aero trickery to aid it in slicing through the wind more efficiently. This includes a generous smattering of truncated-airfoil tube shapes across all wind facing area's of the redesigned frame as well as an uncluttered bar/stem set-up.

The result? Trek claims that over a flat course at 350 watts after an hour of riding, the new Emonda will be 60 seconds faster than its predecessor. While the vast majority of us would go into cardiac arrest attempting to hold this power for a full hour, even at modest power levels, the claimed aero gains are nothing to be sneezed at and are likely to have a tangible effect out in the real world. Most importantly, this should bring the Emonda in line with its competition such as the 2021 Giant TCR, and the Cannondale SuperSix Evo. 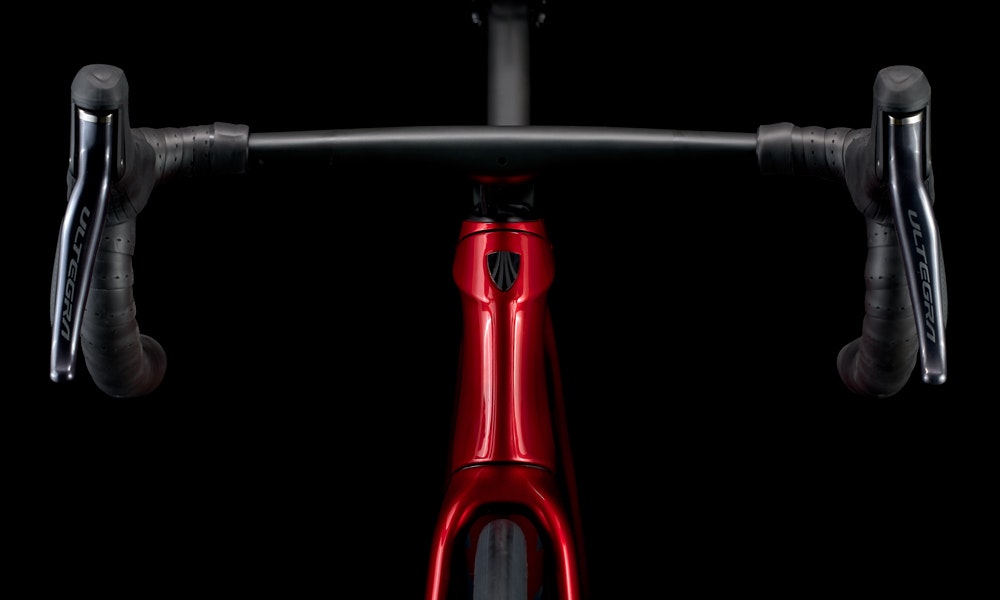 Aiding in aerodynamic efficiency, Trek has added a host of integration features to the new Emonda. These include tucking the derailleur and brake cables up under the stem, and feeding them through the frame out of the wind, as well as introducing an all-new integrated bar/stem option that's included as standard on top-end SLR models. The integrated cabling isn't limited to top-end models either, all models in the range benefit from the smart internal routing.

The new bar/stem cockpit, on the other hand, is limited to flagship offerings. While similar-looking to the two-piece unit found on the Madone, the integrated cockpit is a one-piece unit, purely to keep the weight at a minimum.

Despite altering just about every frame tube on the bike, Trek has managed to eschew modern trends and retain the traditional double triangle aesthetic that purists (and us here at the BE office) are sure to appreciate. Despite the familiar silhouette, Trek has decided to streamline its geometry options moving forward. This means no H1 or H2 fit; rather, all Emonda models feature what Trek dubs H1.5. This means that reach is increased marginally, while headtube lengths are shorter, placing the rider in a slightly more aggressive (lower) position than previous models with the H2 fit. Additionally, Trek is no longer offer women's specific models in the product line-up. Instead, a generous spread of eight sizes ranging from 47cm up to 62cm is the new norm.

While the original Emonda hit the headlines back in 2014 with its flagship offering tipping the scales at a scant 4.75kg, flagship offerings of the 2021 Emonda are claimed to tip the scales at bang on, or just under the UCI weight limit of 6.8kg. This should come as little surprise to potential buyers, after all, road bikes have been trending heavier in recent years due to the implementation of disc brakes, aerodynamic and stability features. Still, at a claimed weight of 6.72kg (Size 56) the 2021 Emonda is still more or less class-leading when it comes to disc-equipped modern race bikes.

As for raw frame weights, Trek claims the SLR frameset weighs in at 698grams (Size 56), while the fork is said to add a further 365g. SL level framesets hit the scales at 1,142g (Size 56) with the fork weighing in at 380g. As a result, Trek says the weight difference between SL and SLR builds with a comparable specification is around 500 grams.

6. A Focus on Stiffness and Durability 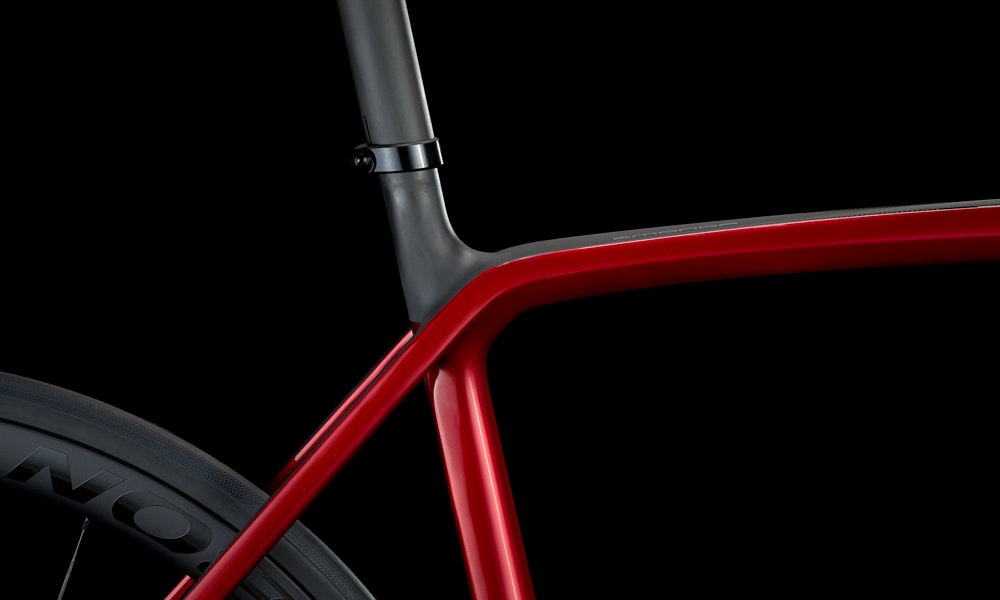 With thanks to an all-new carbon blend Trek calls OCLV 800, the new Emonda SLR is said to be within 5% of the stiffness numbers touted for the MY18 Emonda. This is no mean feat, considering that the frame has more or less been redesigned around subtle aero cues rather than rigidity and feathery weight figures like its predecessor. A bonus of the new carbon blend is that flagship SLR models are said to be 30% more durable as a result of the unique fibres ability to absorb more energy.

However, in the pursuit of a class-leading overall weight figure, Trek has decided to omit its IsoSpeed compliance technology from the MY21 Emonda. What this means for the end-user is that the Emonda remains a dedicated road bike, rather than the aero/gravel/endurance/race bikes that appear to be the norm of late. So if you're in the market for a lightweight and efficient road bike, the Emonda should check more than a few boxes.

While internal cabling and integrated features usually present a fair share of headaches for both home tinkerers and shop mechanics alike, the DIY enthusiast will rejoice at the news that Trek has outfitted the Emonda with a T47 threaded bottom bracket, and a sensible approach to its cable routing. While the cables are fed through the headtube, channels on the fork and the underside of the integrated bar stem mean that simple tasks such as replacing your stem, bars, bar tape or cables is a straight forward job. Additionally, the move to a threaded bottom bracket should make for plenty more creak-free bikes on the roads, and allows for a broader range of crankset options to be used, win-win! 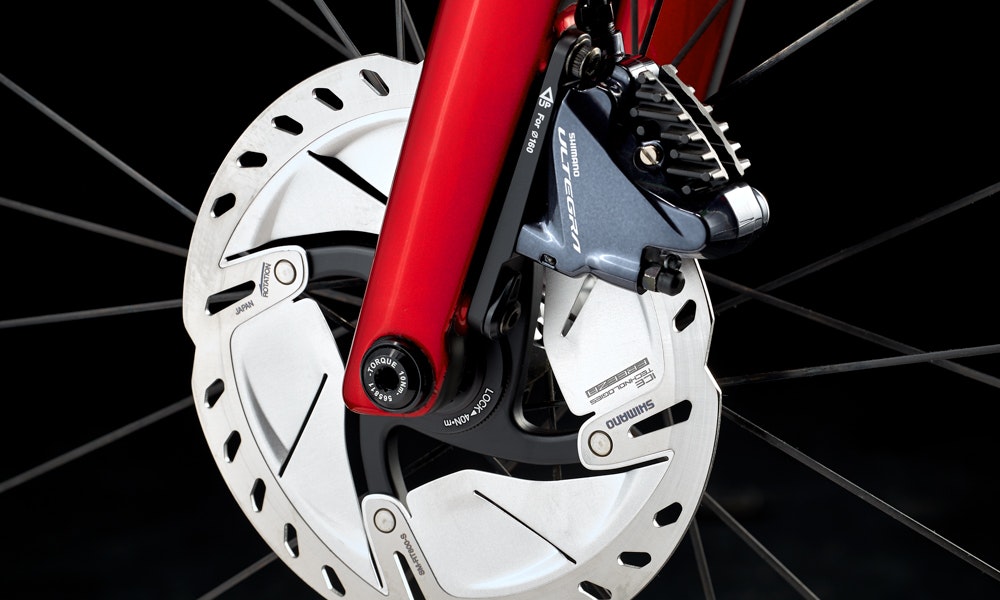 Somewhat controversially, yet unexpectedly, Trek has foregone rim brake altogether with the latest Emonda. While this is bad news for weight weenies and traditionalists, the majority of buyers should find comfort in the increased modulation and braking power offered by the flat-mount disc-brake standard. As for rotors, Trek says the Emonda will accept either 140, or 160mm rotors, so if you want more bite from your anchors, you now have the choice to spec larger rotors if that's your preference. As for tyre clearance, Trek claims a maximum of 28c tyres are to be used; however, early reports indicate that this is quite a conservative limit and broader rubber will likely fit as the riders risk. 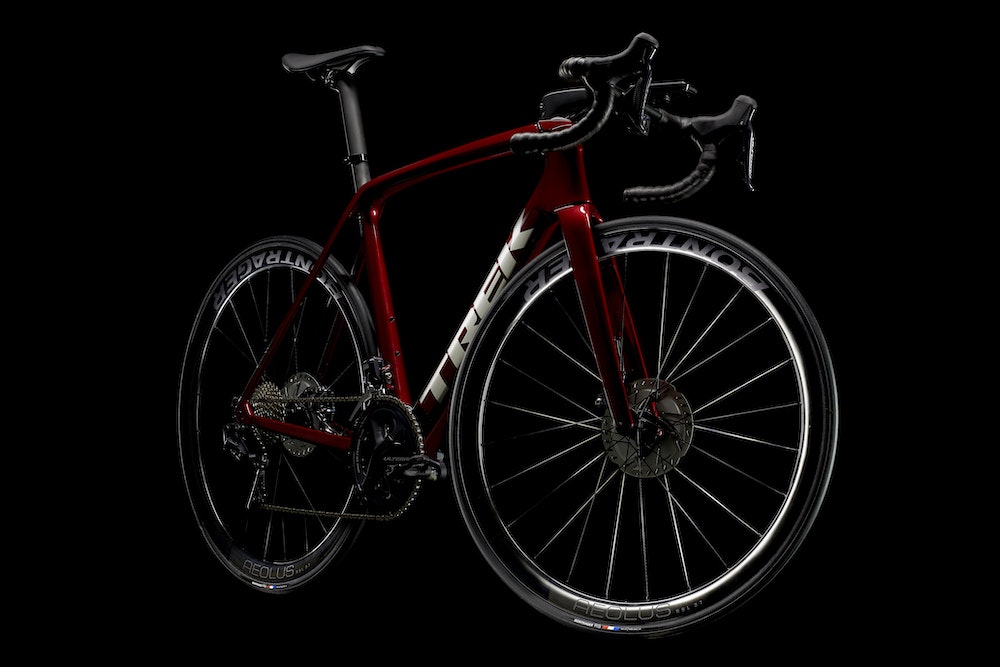 Announced alongside the Emonda was not one, not two, but three new disc-specific wheelsets from inhouse component supplier Bontrager. Said to be the "ultimate race wheel", the all-new Aeolus RSL 37 (RRP AU$3,798) wheelset sits atop the crop of new offerings. The lightest clincher wheelset ever offered by Bontrager, the Aeolus RSL 37 weighs in at a claimed 1,325g a set. The new hoops feature an all-new rim shape that's said to be more aerodynamically efficient than the Aeolus XXX 4, despite being shallower at 37mm deep. When it comes to width, Internal rim width is said to measure in at 21mm, while the external width is a claimed 28mm. Hubs come courtesy of DT Swiss in the form of its new 240s EXP 36-point ratchet hub and are laced to the rim with DT Aerolite spokes with DT Pro Lock nipples.

The final addition is the Aeolus Elite 35 and Aeolus Elite 50 TLR Disc wheelsets. Priced at AU$1,498, the Aeolus Elite wheeler is said to offer both performance and affordability. Claimed to weigh from 1665g, the tubeless-ready Aeolus Elite has a 19.5mm internal rim width, an overall width of 27mm and are backed by a lifetime warranty.

The 2021 Emonda is available at Trek dealers around the country right now! Check with you nearest bike store for local availability.

The Australian Emonda range including pricing, weights (for a Size 56), and specification are as follows; 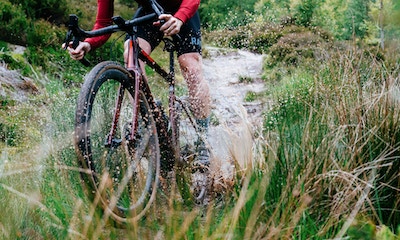