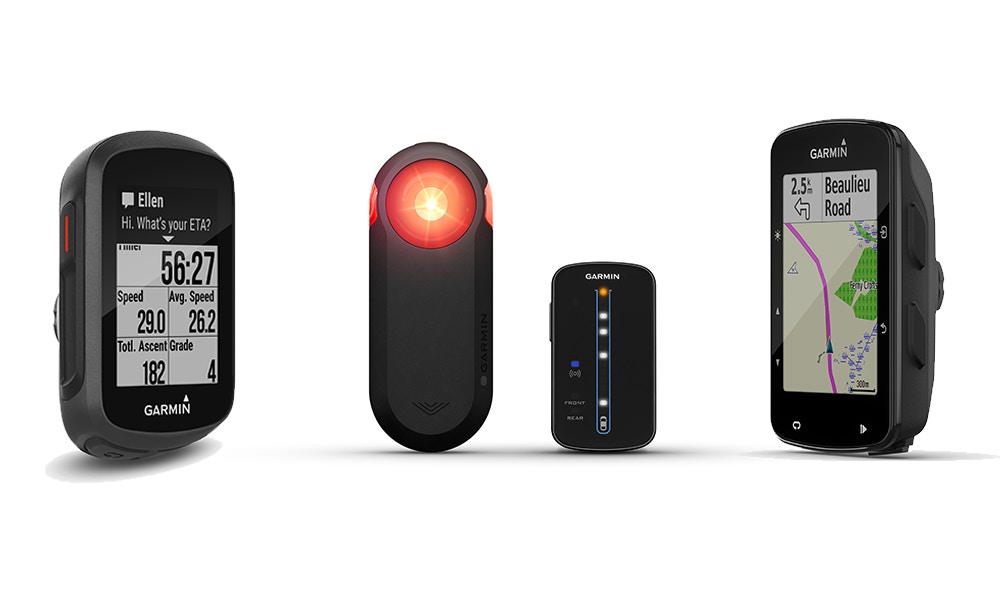 It’s only April, however, cycling industry product launches for the following year are coming in thick and fast. Ahead of the Sea Otter Classic, North America’s premier cycling festival, Garmin unveiled its latest offerings to the cycling world.

The navigation experts have introduced a new entry-level model to its highly capable Edge family of cycling computers. In addition to this, the Edge 520 see’s an update as does the rear-facing traffic sensing Varia bike light. So with a new budget-friendly option, and a host of smart features added to its stablemates, read on for ten things to know.

Garmin has been a market leader and go to brand in the cycling computer game for a number of years now. The broad range caters to all users from professional and performance-minded riders all the way through to weekend warriors and everyday enthusiasts.

With GPS a standard feature, the individual capabilities, and features distinguish the various computer models. However, it must be said that gap is closing, following the release of the Edge 1030 late last year, many of the new features found on the flagship unit, such as mountain bike specific maps, have filtered their way down to more affordable options like the new Edge 520 Plus featured here.

Designed to be lightweight, compact and rugged, the Edge 130 slots below the 520 in the Garmin family of cycling computers. Fans of the hugely popular Edge 500, or the cheaper Edge 200, will rejoice in the simplicity of the new unit. Whilst smaller physically, it boasts a larger 1.8” screen that Garmin claims is readable in direct sunlight and is said to give riders a crisp view of their metrics. The unit also features a simple five button interface for ease of use regardless of the terrain. With a claimed 15-hour battery life, this is one unit that’s sure to appeal to those seeking a simple and compact way to track their ride data.

Making use of GPS, GLONASS, and Galileo satellites, Garmin claims the 130 will provide users with fantastic coverage, ensuring more accurate ride data. In addition to the boosted accuracy, the new unit also scores Course Creator capability, where users can plan and download routes before heading out for a ride.

Whilst the Edge 130 is priced towards the entry-level of the cycling computer market, the connectivity of the device is up there with benchmark devices found higher up in the Garmin product hierarchy. With Bluetooth and ANT+ connectivity, the 130 is capable of showing a number of metrics from sensors including heart rate, power, speed and cadence.

Connectivity on the Edge 130 goes beyond sensor compatibility too, with the unit scoring a number of smart features including message and call notifications, as well as weather alerts, should mother nature change her mind mid-ride.

5. Edge 520 Plus: Breathing New Life into a Benchmark Device

Garmin claim that they’ve taken all that was good about the Edge 520 and improved upon it to create one of the most competitive cycling computers available on the market.

Key features such as Strava segment live-tracking carry over whilst more navigation and safety features find their way onto the device, more on that below. The Edge 520 Plus is claimed to last up to 15 hours per charge and is housed in the same shell as the standard 520.

First debuted on the flagship Edge 1030, the 520 Plus scores the intuitive Garmin Cycle Map. Preloaded on the 520 Plus, Cycle Map gives riders turn-by-turn navigation as well as providing alternate routes if a rider strays off track, or bails from a route to return home. In addition to this, the unit can also issue alerts to notify riders of upcoming hazards on the road such as sharp turns.

The 520 Plus also scores a number of connectivity add-ons. Messaging and call alerts carry over, however, the new unit has a new integrated rider-to-rider messaging function as well as group tracking capability.

Along with connectivity gains, the Edge 520 Plus also has an Incident Detection feature which when triggered, sends out the cyclists’ location to a list of pre-selected emergency contacts.

An update of Garmin's radar-detecting rear light, the Varia RTL510 scores a host of improvements over the first iteration. A new design means a single bulb takes over lighting duties from the strip of LED’s found on the original model. Garmin claims the RTL510 can be seen from up to 1.5km away and is visible within a 220-degree range. When paired with the radar display unit, or compatible Edge device, the unit will alert riders of a vehicle approaching from up to 140 metres away.

The new vertical design is claimed to provide better leg clearance on the bike and carries the added benefit of being easier to mount to a range of different seatpost shapes. Garmin claim the RTL510 offers up to 15 hours of battery life on day flash mode, and 6 hours in night flash, or solid mode.

The Garmin Edge 130, 520 Plus and Varia RTL510 are available in Australia right now over at garmin.com. Check with your bike shop for local availability.

Want to start tracking your metrics? Check out the wide range of Cycling Computers available from leading retailers across the country right here, at BikeExchange.