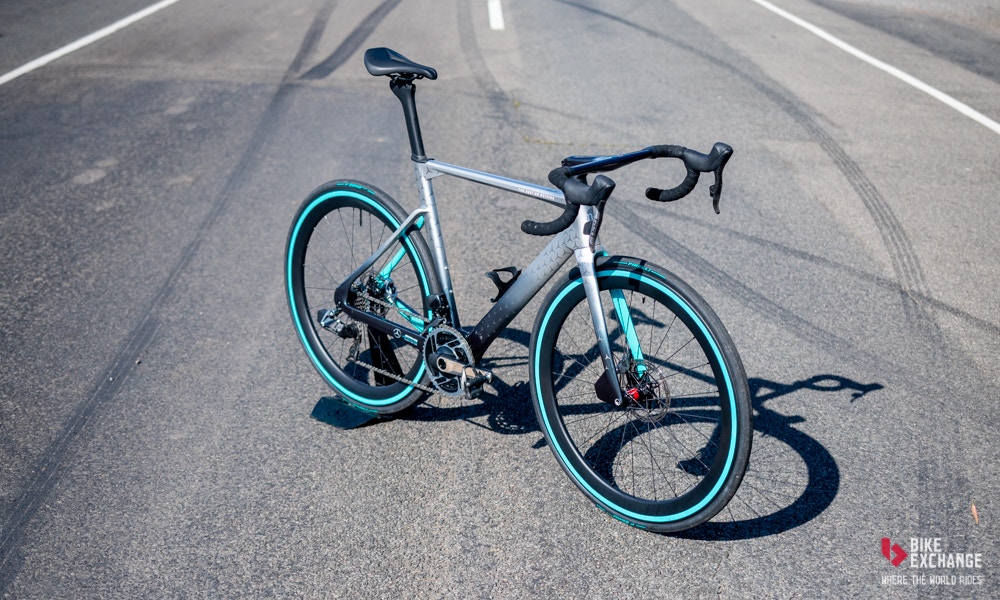 When it comes to the crucible of motorsport, the pinnacle of four-wheeled racing is Formula One. Over the last decade, the Mercedes-AMG Petronas team has utterly dominated its competition, winning both the Drivers World Championship and the Constructors Championship the previous Seven years in a row. In 2020, the German team licenced its own line of road bikes and e-bikes, designed to emulate two-wheeled versions of its successful F1 and Formula E series race cars.

While automotive and cycling crossovers have been met with mixed success in the past, there have been some notable wins. Think Specialized and McLaren teaming up to birth the first iteration of the Venge, or Ferrari and Colnago collaborating to design the C35, C40 and most recently, the all-around V1-R race bike. So when Mercedes-AMG announced it was throwing its hat into the world of licensing its own race bike, we were keen to throw a leg over the silver arrow adorned steed and put it through its paces.

A Frame to Tie It All Together 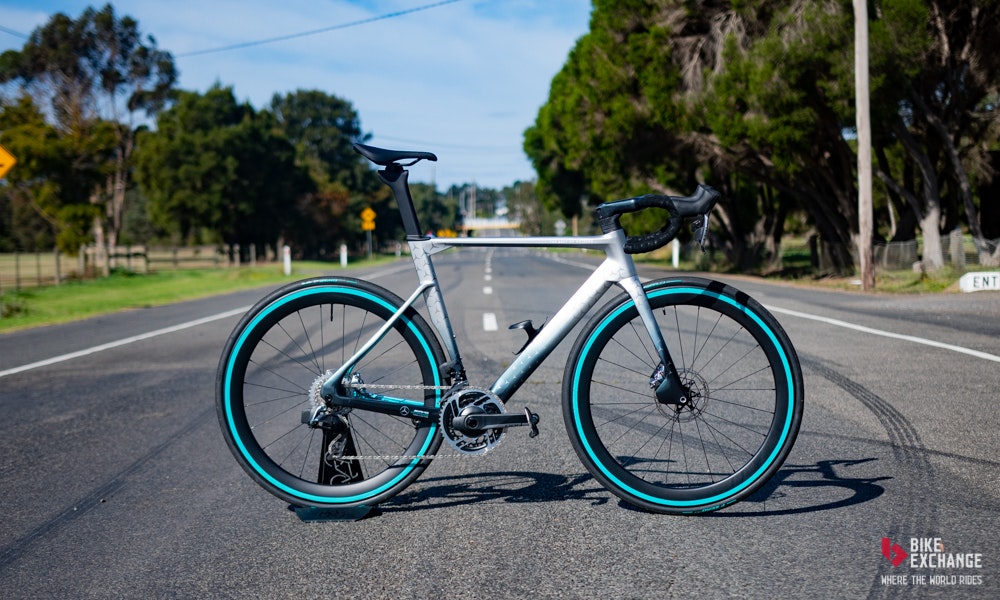 At the heart of this Formula One-inspired bike is a carbon monocoque frame that is comprised of T1000/800/700 high modulus carbon. The frame itself is quite obviously aero-inspired and takes a similar aesthetic to its aero road bike competition. This means integrated cabling, wide aero shaped frame tubing, and what n+ calls “Motorsport inspired” aero fins on the fork. The bike carries the BB86 bottom bracket standard and can accept either mechanical or electronic disc brake groupsets. 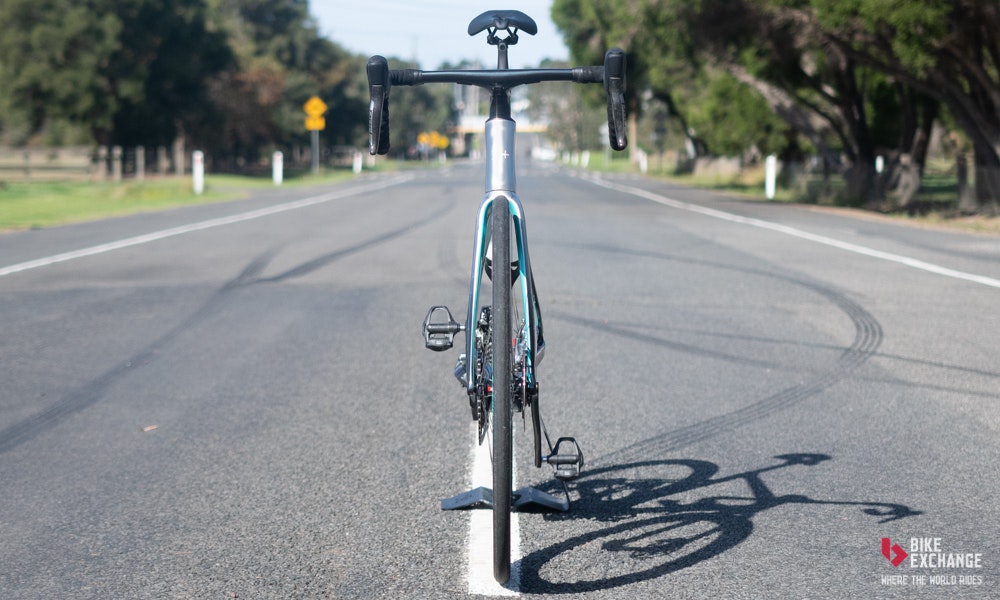 Despite being an aero bike, the bike’s weight is somewhat competitive with other aero focussed steeds. The frame is claimed to weigh in at 1160g, with the complete bike said to weigh 7.35kg. On our scales, our SRAM Red eTap AXS test bike weighed in at 7.5kg in size Large, complete with a bottle cage and pedals fitted.

Finally, the key selling point of this frame is the race car-inspired paint scheme. Each V11 and V12 is said to be assembled and painted by members of the team at the Mercedes-AMG Petronas F1 factory in Brackley, UK. 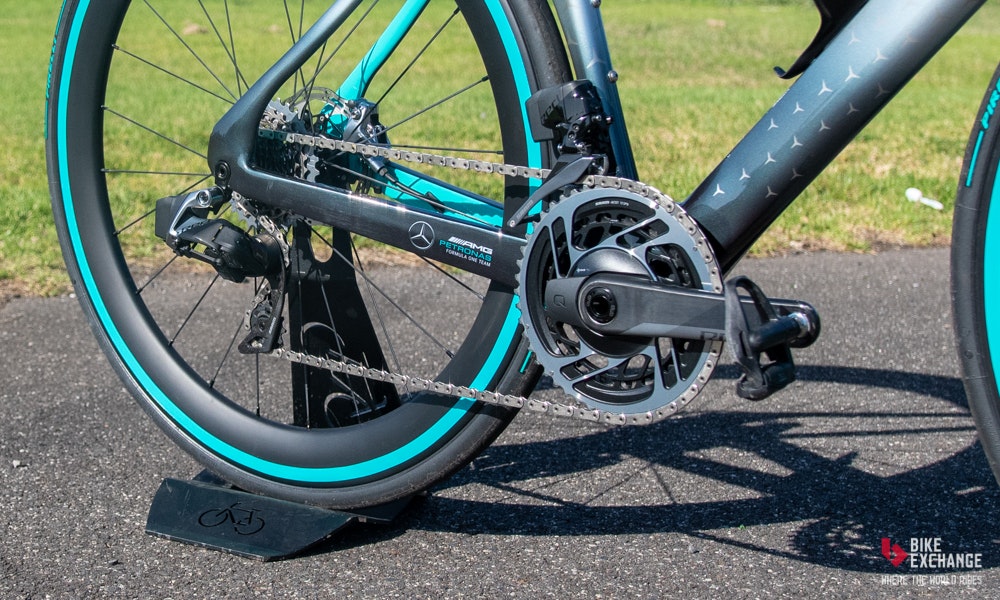 The V11 and the new V12 Carbon Edition ships in three different iterations, increasing in price the more flagship bits added to each fit-out. At the “entry-level”, the bike ships with a mechanical SRAM Force 22 groupset, as well as a host of components that feature on all other bikes in the range; an integrated carbon bar/stem, flat-mount hydraulic disc brakes, BEAST Alcantara carbon saddle, and a Mercedes-AMG branded carbon wheelset shod with 25mm Pirelli P Zero Petronas LTD Edition tyres.

Sitting above this is a Force eTap AXS option and a flagship SRAM Red eTap equipped version, which scores a Quarq power meter integrated into the crankset.

The components list highlights outside of the groupsets are undoubtedly the wheelset and the featherweight carbon saddle. Our test mule was fitted out with a 50mm deep wheelset that carried the same 30mm external and 22mm internal rim width. Shod with 25mm limited edition Pirelli rubber, the modern width plumped our tyres out to an efficient 28mm on the bike, making for a smooth ride. 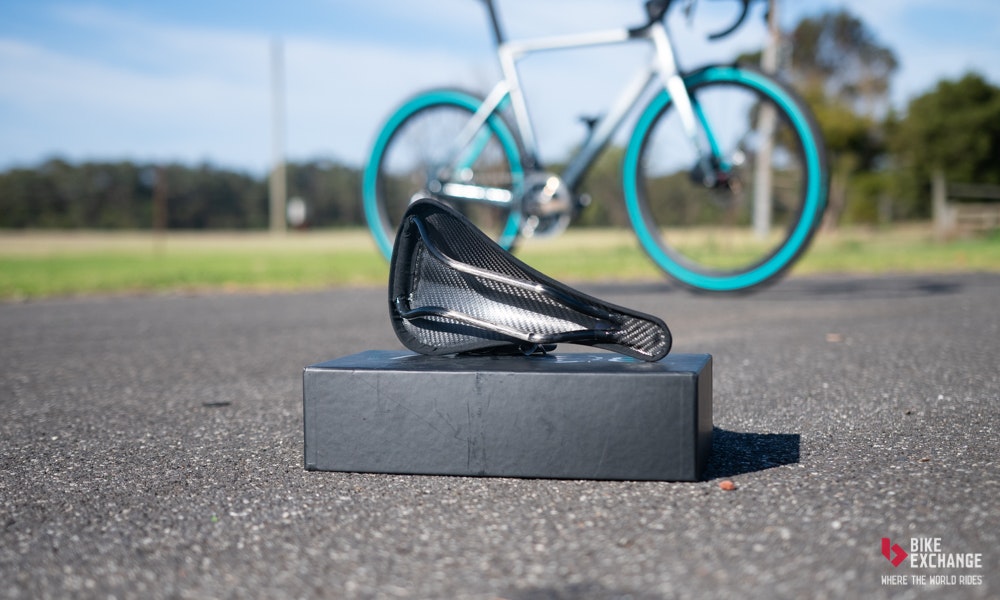 The carbon saddle, hand made by BEAST components in Germany, is the show stopper. Tipping the scales at a meagre 106g and carrying a weight limit of 90kg, the Alcantara clad saddle should appease any weight weenie.

Finally, arguably an essential aspect of any bike purchase, each V11/V12 sold comes with a Hintsa one-on-one bike fit. This puts a Hinstra accredited specialist in touch with each buyer to ensure each bike is shipped to fit its user straight out of the box. 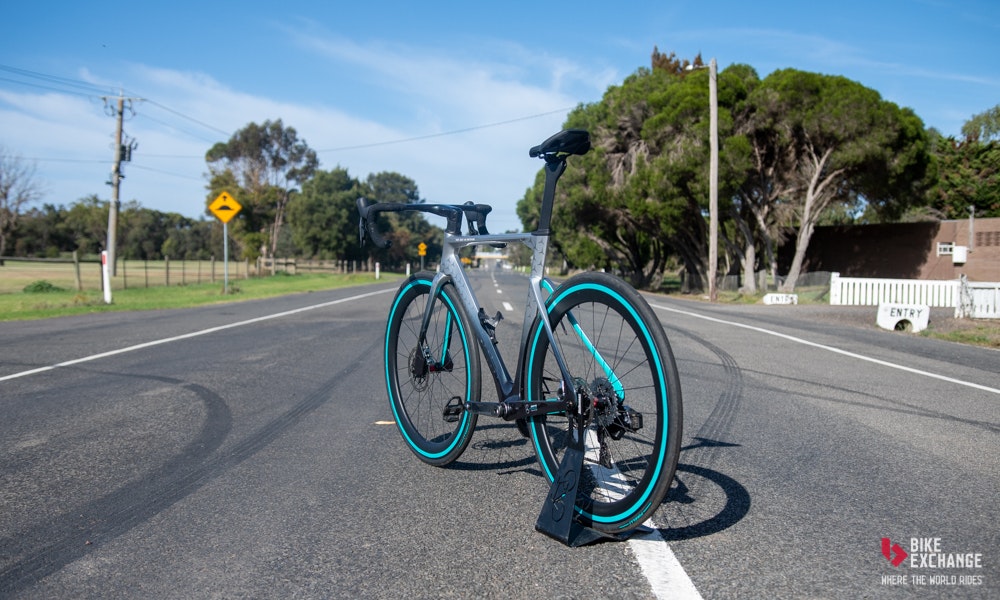 Eighteen Thousand Dollars, it’s not a small amount of money, and with that price tag comes both a particular set of expectations for performance and the expected clientele of a bike such as this. This phrase continued running through my head for the first tepid 60km I spent aboard the n+ V11. On paper, it’s easy to dismiss the V11 as another “dead-eyed marketing exercise”, thankfully, bikes are made to be ridden in the real world, not on internet forums. When it comes to this steed, I’m happy to admit I was pleasantly surprised with this bike’s performance.

Much like the Formula One car the bike draws its inspiration from, the V11 and the updated V12 are not going to appease everyone. Love it or hate it, this is one ride that certainly turned heads whenever I had it parked up at the cafe mid-ride or pulled up to a set of traffic lights.

A long and low position, short chainstays, and a steep headtube angle make for a quick-handling bike that excels on criterium racing circuits, hot mix tarmac and rolling roads begging to be ridden fast. In the right hands and the right conditions, this bike is just that – fast. 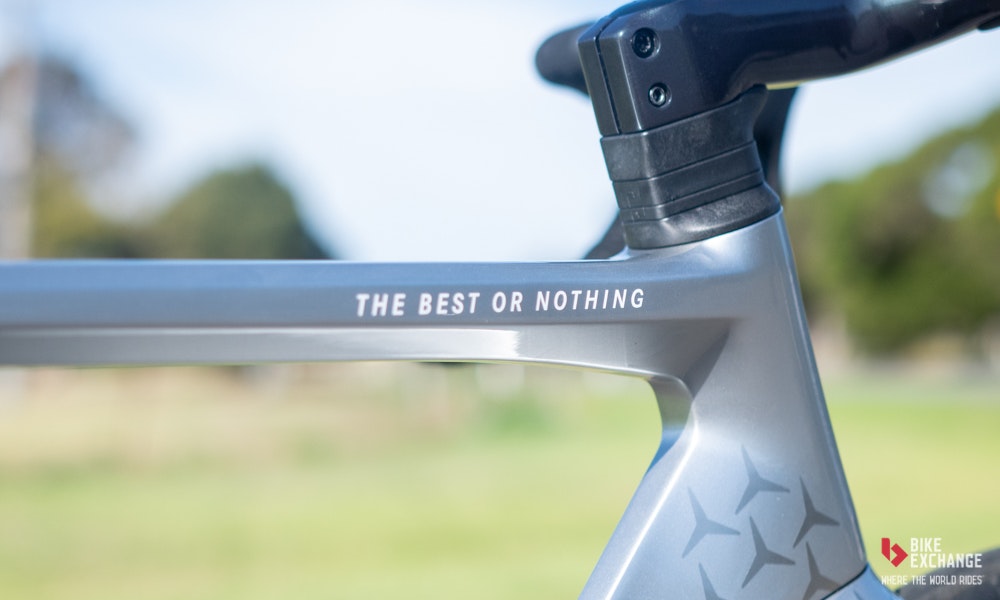 Out of the saddle, dancing on the pedals, or hunkered down in the drops, the V11 was efficient and translated my efforts well to the tarmac below. The beefy bottom bracket area and short chainstays make for a bike that accelerates and climbs well, however, this is one ride that shines on rolling terrain rather than hilly routes.

The downside of this quick-handling nature and the broad aero-shaped frame tubes is that the bike can be a bit of a handful in crosswind conditions. Much of this was felt at the front of the bike with the “motorsport” inspired aero fins. The fins are similar to those found on the Scott Foil and other aero focussed bikes. N+ claim that these fins reduce drag generated by the disc brakes. However, in our experience, once the crosswind whipped up above 20-25kph, these fins felt like they caught more air and tugged at the bars more than they aided in overall aerodynamics. 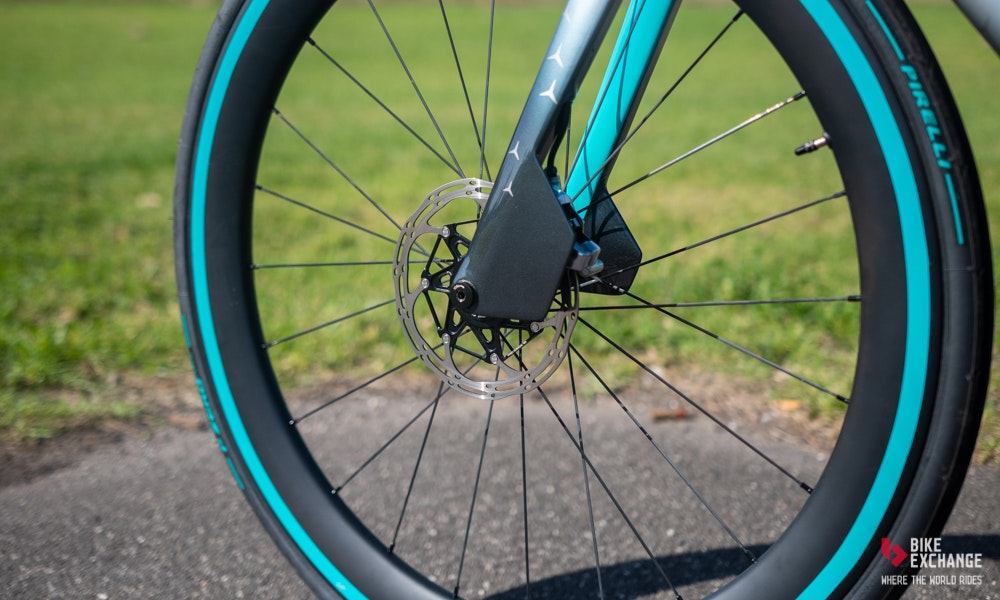 This isn’t to say that the bike was fatiguing to ride over a vast distance, though. Despite the apparent aero focussed nature of the bike, the V11 swallowed up kilometre after kilometre of tarmac that varied from fast hot-mix to coarse chipseal around my local testing ground in Victoria’s Surf Coast region. Sure it’s not as smooth as an endurance-focused road bike or my Specialized SL6 Tarmac I have as a daily driver, but when it comes to aero bikes, this is up there with the most compliant steeds I’ve ridden.

Much of this smoothness and compliance was thanks to the sublime wheelset. At 50mm deep and 30mm wide, the hoops did an excellent job in tandem with the fast-rolling Pirelli P Zero rubber at minimising road buzz and providing a decent amount of comfort. 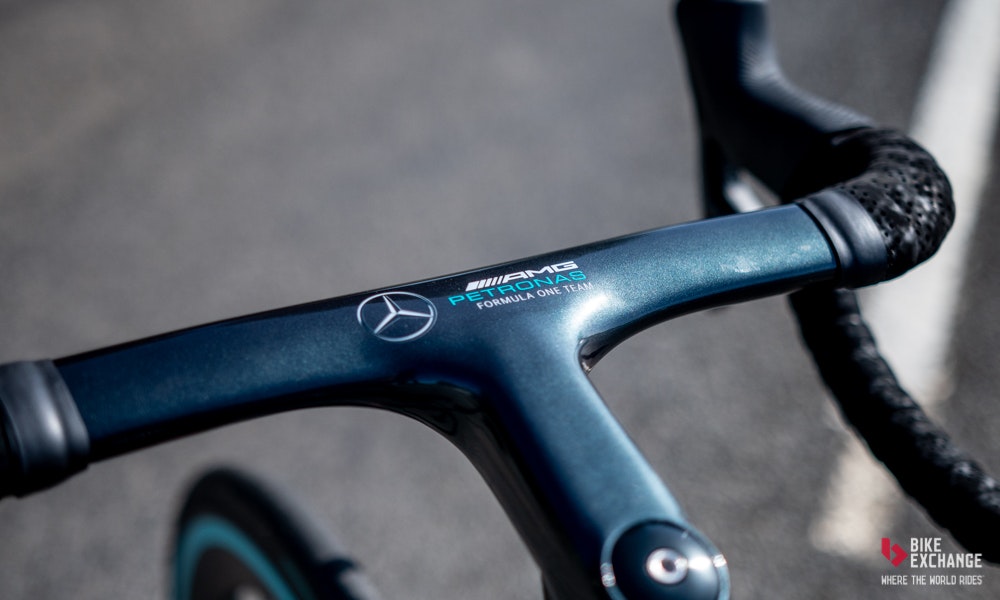 Elsewhere the rest of the bike build was as you’d expect from a bike of this price point. The SRAM Red eTap AXS groupset was flawless during the test period, with the shifting crisp and precise, and the brakes easy to modulate and easily powerful enough when required. While the BEAST saddle arrived mid-way through the test period, it provided a surprising amount of comfort despite its weight weenie nature. A word of caution, though, the manufacturer specifies a 90kg weight limit on the saddle, somewhat limiting the riders able to ride it. 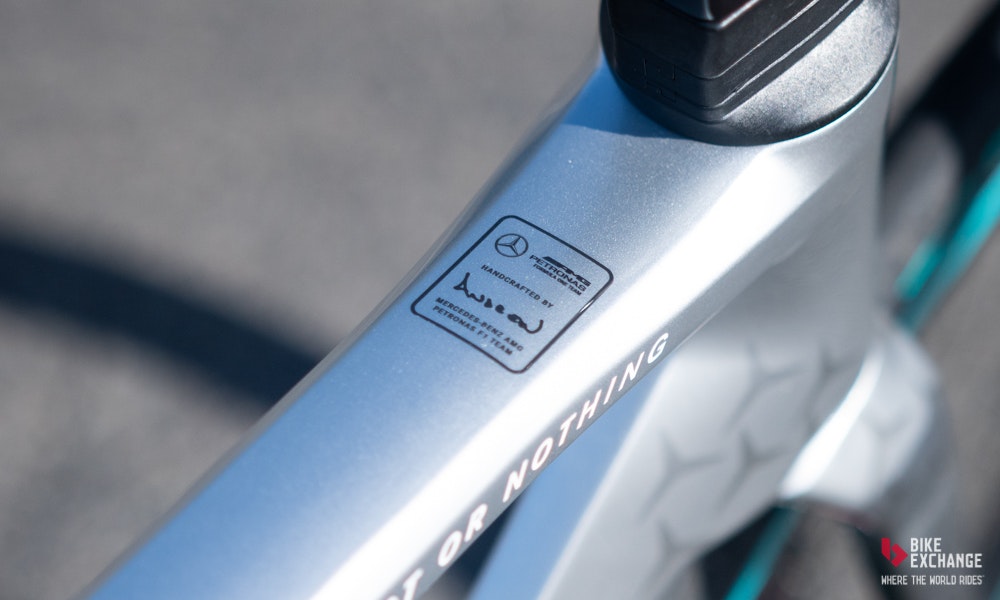 With the V11 and the more or less identical 2021 variant, the V12, there’s no denying that the price tag, limited production numbers and the tie-in with Mercedes-AMG Petronas will both attract and ensure that this bike hits an exclusive clientele. Despite being fit for its intended purpose, the biggest stumbling block I foresee is that while n+ is pitching this bike to a specific niche, many will still want to compare it to flagship race bikes from established brands which is hard to break away from.

Strip the marketing and price away from the bike, and at its core, this steed offers a ride that very few will get the privilege to enjoy. Which, in a way, is a shame, as, sans the F1 tie-in and the associated price hike, specified right, at its heart, this is one ride that would make a great race bike.

So if you are looking for a bike that you’re more or less guaranteed to not see in your local bunch ride, to park in the shed next to your toys, or simply a ride that’s equal parts form and function, right this way.

Disclaimer: While N+ has paid activity on BikeExchange, this review and all other reviews on site are not sponsored content

Check out the wide range of Road Bikes on sale from leading brands and retailers right here, at BikeExchange