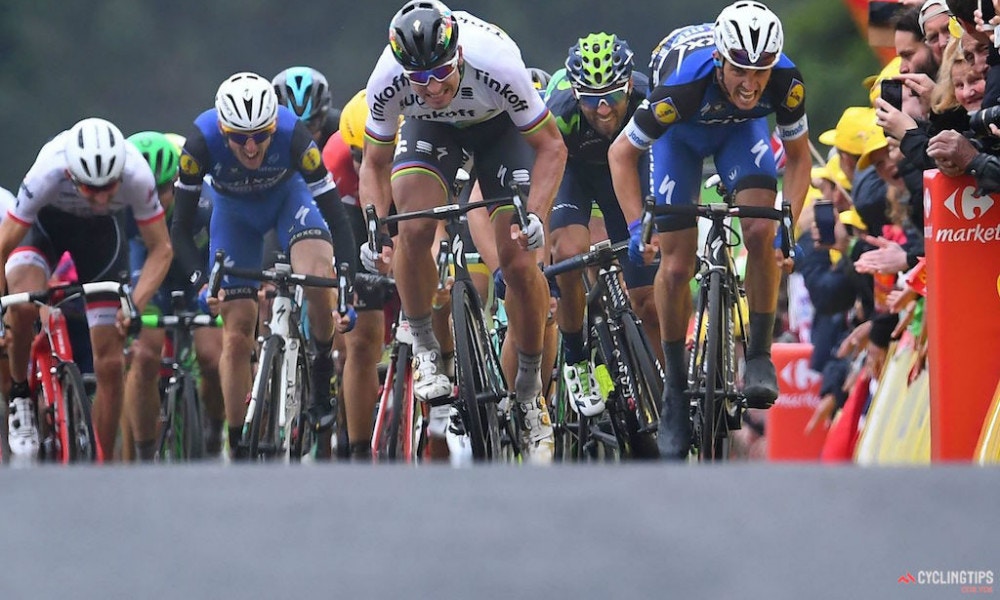 There were several winners and losers on Stage 2 of the 2016 Tour de France, but none more so than world champion Peter Sagan, who took his first Tour stage win since 2013, and with it, the yellow jersey of race leader for the first time in his career.

The day’s “first loser” would be Frenchman Julian Alaphilippe (Etixx-QuickStep), who punched his handlebar across the line as her finished second. Spaniard Alejandro Valverde (Movistar) rounded out the podium in third.

The day’s biggest losers, however, were GC contenders Alberto Contador (Tinkoff) and Richie Porte (BMC Racing), who both lost significant time on the classification. Contador suffered on the final uphill drag to the line after crashing early in the stage; his second crash in as many days at the Tour. Contador lost 48 seconds on the stage, but the day’s biggest loser was Porte, who punctured inside the final five kilometres. The Tasmanian lost 1:45 on the stage.

The day’s biggest heartbreak goes to young Belgian Jasper Stuyven (Trek-Segafredo), who rode in the daylong breakaway, attacked solo 8.5km from the line, held a 1600-metre gap with 5km remaining, but was caught inside the final 400 metres.

From there, it was a slow-motion uphill sprint, with the world champion proving strongest.

Sagan took over the lead with 300 meters to go, but showed tactical nous, allowing another rider to open the sprint. Tour-rookie Alaphilippe showed his youthful exuberance and opened the sprint; Sagan jumped right into his slipstream. As the lactic acid set-in for Alaphilippe, Sagan surged into the lead and took the stage win, albeit unknown to him in the moment.

“I am very surprised I won,” Sagan said at the finish. “I was thinking on the front, there were still two guys. Then I finished first, and I didn’t know I’d won. Everyone was telling me I won. I am very surprised, and very happy. My team did a lot of work.

“Roman helped me a lot on the last climb, he pulled until 500 meters to go, then it was just my legs. Everyone came to the front. Alaphilippe was very close to winning, but I beat him in the finish. It’s the first time in my career to wear the yellow jersey. I’m wearing a nice jersey now, but to wear yellow for the first time is very nice.”

For his efforts, Stuyven was voted the day’s most aggressive rider, as well as the polka-dot KOM jersey.

How It Played Out

A steady rain greeted the riders in the morning, but Mark Cavendish (Dimension Data) stood out, splendid in his maillot jaune. The “Manx Missile” has now worn the leader’s jersey in all three Grand Tours.

The 183km (113.7mi) second stage from Saint-Lô to Cherbourg-en-Cotentin featured a finale tailor-made for the punchy riders of the bunch with a tough 1.9km category 3 climb coming in the final three kilometres before a leg-sapping 700m uphill drag to the finish.

Paul Voss (Bora-Argon 18) had a polka-dot paint themed bike to go along with his King of Mountains jersey and again the German attacked from the stage start. He was joined by his teammate Cesare Benedetti, Stuyven, and Vegard Breen (Fortuneo-Vital Concept).

This marked the second consecutive stage the Bora-Argon 18 team had two members in the day’s breakaway.

A rolling opening 50km featured three category 4 climbs and Voss was looking to extend his lead in the KOM competition, however he failed to gain a single point and appeared to be suffering from his effort one day earlier, as he was briefly dropped from the lead group.

Stuyven was able to capture two of the three opening climbs and pull-even on points with Voss. The category 3 climb at the end of the stage would determine who would pull on the KOM jersey with two points on offer for the winner, meaning a rider without points still had the opportunity to pull on the polka dot jersey.

Dimension Data set a steady tempo in the peloton and allowed the breakaway to gain a bit of leash with the leaders stretching their advantage to nearly seven minutes.

The slick roads made the racing treacherous and Contador hit the deck for the second day in a row, 60km into the stage. The Spaniard remounted his bike quickly. Rodriguez, Matthews, Tony Martin (Etixx-QuickStep) and others also went down. All riders would rejoin the peloton, but Contador would lose 48 seconds in the finale.

“I lost more time than I had hoped to lose,” Contador said. “I suffered another crash, I hit the handlebars and I was hurt on the other side from yesterday. I must stay calm, not lose morale, I’m still standing but I have been really touched. The Tour has really started on the wrong footing. I’m not happy at all. It’s cycling. I must see if I can make up some time in the Pyrenees and the Alps, see what I can do.”

While the Dimension Data riders continued to lead the peloton, one of their team cars was in need of assistance, suffering from a puncture. They received a relatively quick tire change and rejoined the caravan. The gap to the leaders still hovered around the six-minute mark with 60km to race.

Sam Bennett (Bora-Argon 18) and Michael Morkov (Katusha) both struggled throughout the stage, each man nursing serious injuries from falling in the finale on stage 1. They both soldiered on and finished the stage within the time cut.

With 25km to go, Benedetti could not hold the pace in the breakaway and dropped off the lead. The gap to the peloton was down to 3:35 with the teams of the general classification contenders moving to the front, BMC Racing, Tinkoff, and Astana respectively.

Charging into the final 10 kilometres, the peloton was in full chase mode and rain had begun to fall again. Stuyven continued to push the leaders and their gap was over two minutes.

Stuyven, who soloed to victory at Kuurne-Brussels-Kuurne in February, attacked on a small-uncategorized hill with 8.5km to go and set out alone in chase of a stage win and a potential maillot jaune. The peloton flew up the slope, led by BMC Racing, less than two minutes later and riders were immediately shelled off the back.

Porte then punctured and received a wheel change from neutral support, but no teammates were seen around him. He would lose 1:45 on the day.

“What can you do? Sitting second wheel in perfect position. I don’t what the hell I did,” Porte said. “The next thing the rear tire went down and then I had to buckle the seatbelt out there, going back through the peloton was quite dangerous. It’s a disaster. I don’t know what really you can do, move on I suppose.”

Stuyven hit the category 3 climb just before the uphill drag to the finish and his gap came tumbling down.The Trek-Segafredo rider made it over the top in the lead, but was brought back on the plateau before the final drag to the finish. He will wear the King of Mountains jersey on stage 3.

“My main feeling is disappointment. In the breakaway, I knew I’d be the fastest if we were to arrive for the victory. I could keep a good pace in the first part of the climb but I felt empty in the steep part. It’s a good thing I have at least the polka dot jersey even though I’m not really a climber. It’s a nice jersey to have but my legs will hurt tomorrow,” Stuyven said.

Tom Jelte-Slagter (Cannondale-Drapac) had a go out of the peloton on the final climb, but was brought back by Kreuziger, who had escorted Sagan to the front of the peloton.

Inside the final kilometre, everyone fought for Sagan’s wheel. The Slovakian showed his maturity by opting to wait to begin his sprint. The hesitation paid off, as Alaphilippe opened his sprint early.

Sagan swiftly moved onto the Frenchman’s wheel and came around the Etixx-QuickStep rider as he faded in the final 50 metres.

Sagan now leads the general classification by eight seconds over Alaphilippe, who collected the white jersey of Best Young Rider as a consolation for his efforts.

“Today I got my first emotion at the Tour de France, but it’s also a small disappointment because I’ve been so close to winning,” Alaphilippe said. “It’s a feeling of frustration. I’ve been told I should be happy and it’s probably true because Peter Sagan is a big champion. This is my first Tour. I still have a lot to learn. To have the white jersey is good for my morale and for my team. I’m here to discover what the Tour is like. I’m also here to help my team the maximum I can. We’ll ride full gas every day.”

Valverde sits third overall, 10 seconds behind Sagan. “I was doing well before the last kilometer uphill, but I took the choice to follow Matthews’ wheel into the final 500 meters, and I got a bit boxed in from the left-hand side as I sought for my sprinting distance,” Valverde said. “I thought Matthews would be stronger into such a kick, and once I got past his wheel, the rivals in front of me, super fast guys like Sagan and Alaphilippe, were impossible to overtake.”

Sagan also leads the points competition, which he has won the last four years.

The third stage of the Tour de France from Granville to Angers will see the sprinters back in action. The 223.5km route does end with a slight uphill to the finish and should see Sagan fight for a stage win in the yellow jersey.

Michael Matthews recovered from his stage one crash to finish an impressive 5th on stage two of the Tour de France. It was another fast and furious race to the line with plenty of crashes taking out some big name contenders.

Matthews came home in fifth place with Sagan now moving into the race lead and the yellow jersey. Gerrans crossed the line just outside the top ten in 11th with Adam Yates close behind in 13th.

Sport director Matt White was content with the efforts with the team on what he acknowledged was a hard stage.

“It was a tough finale today,” said White. “The stage was reminiscent of a classics race and the uphill sprint was made up of an eclectic mix of the world's best climbers and classics riders.”

“The team rode very well throughout the stage, Michael (Matthews) was in a good position going into the finish he gave it everything and came very close.

“It has been a solid start to this years Tour de France for us, but it is a long race and we have got work to do.”