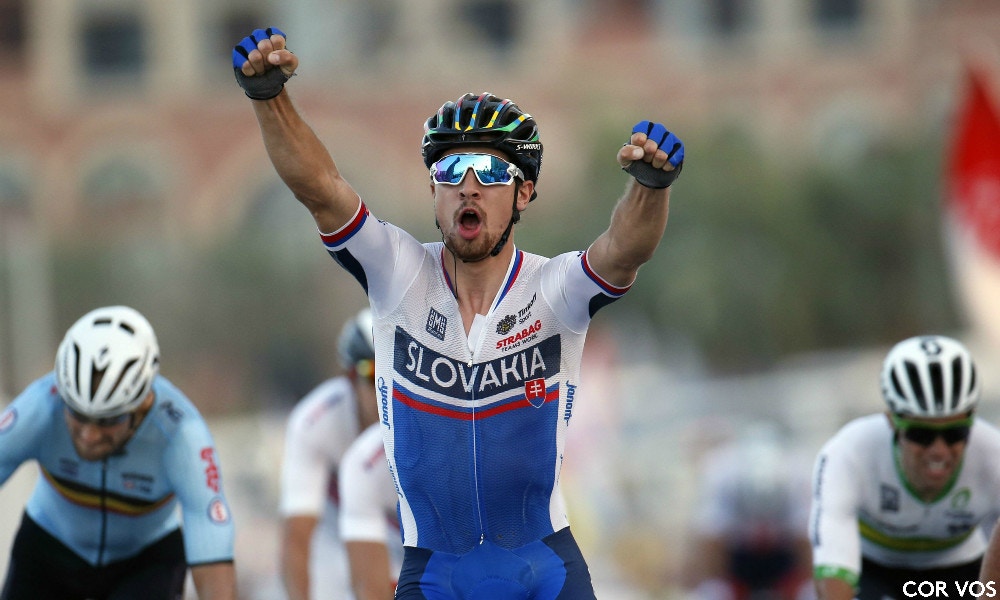 Just when you think the Santos Tour Down Under couldn't get any better, word filters through that the current UCI Road World Champion, seven-time Tour de France stage winner, 11 time Grand Tour stage winner, and mega-star of cycling, Peter Sagan, will take to the start line of the race's 2017 edition. The 26 year old Slovakian powerhouse announced he will start his 2017 cycling season with new team Bora-Hansgrohe at the Santos Tour Down Under following a simple twitter message, "See you next January at @tourdownunder, my first race of the new season!"

Sagan later went on to say, "I'm excited to announce that I will race at the Santos Tour Down Under next year. This iconic Australian race brings the world's best riders on a course that features tough climbs and fast sprints and I'm convinced its 19th edition could be the best so far.”

“The Santos Tour Down Under will be the curtain-raiser of the 2017 season and my first race wearing the Bora-Hansgrohe colours, but it also holds a special place in my heart. I first took part in 2010 in what was my maiden WorldTour race and I still remember the excitement and anxiety on the start line of the first stage in Clare."

“Returning, after seven years, to the race that set off my professional career is a great feeling and I look forward to riding on the roads of Adelaide and South Australia.” - Peter Sagan Back in 2010, Liquigas selected the then 19 year old Slovakian for his first ProTour road race. Far from riding the race in obscurity, the unknown junior mountain biker joined Cadel Evans, Luis León Sánchez and Alejandro Valverde on the final climb of stage 5. The quartet managed to put over 30 seconds into the peloton on the final climb of Willunga Hill and hold them off until the finish.

Let's just reverse over that quickly. A 19 year old mountain biker, riding his first big international road race, with 17 stitches in his arm and thigh from a previous fall, attacking on the final climb of the day with the current World Road Race Champion, 2005 Santos Tour Down Under winner and one of the best all-round riders we've ever seen respectively.

“Six years ago we saw Sagan attack over the last climb on Willunga Hill finishing fifth, battling it out alongside Cadel Evans, Alejandro Valverde and Luis Leon Sanchez. The race and the fans are in store for something special next year when he tackles the climb for the second time,” said Santos Tour Down Under race director Mike Turtur.

“He has had an outstanding season to date, not just with his Tour de France campaign but with victory at the one-day classics, Tour of Flanders and the Gent-Wevelgem. Not only is he a great cyclist, he is also one of the most popular cyclists on the WorldTour."

"We cannot wait to welcome him back to the race – he is an exciting addition.” - Mike Turtur, race director

This time around, he returns to the race he describes as "special to me" as the reigning World Champion and a formidable name in pro cycling. Sagan recently added another rainbow jersey to an incredibly successful year that saw him winning Gent-Wevelgem, the Tour of Flanders, three stages of le Tour de France and the green jersey and, in September, the European Championships in France.

“This will be the fourth occasion the rainbow jersey has travelled to compete at the Santos Tour Down Under," said Mike Turtur. "For any race to have the world champion riding it’s a great honour, and on top of that he’s the European Champion and number one rider on the UCI WorldTour rankings.” "The thing about Peter Sagan is that he’s a brilliant all-round bike rider, but we will never talk about him as a winner of the Tour de France, but he could win the Santos Tour Down Under. With Peter Sagan being a good bike handler, a very intelligent bike rider, we’ve seen that he can mix with the best climbers on Willunga Hill before, and I think that if he plays his cards right, there could be a podium finish in this event because he’s that sort of bike rider."

"We’ll see what he can do in the race, it’s a difficult route for him but he is a man who’s ridden the Tour de France five times and every time won a green jersey. He’s a special guy and I’m delighted, we’ll have fun especially at the Legends’ Night Dinner."

Fans will not only have the opportunity to see Sagan ride in South Australia in January, but they will also have the opportunity to hear him talk at the Legends’ Night Dinner on Saturday 21 January 2017, where he will be honoured. Tickets are on sale now! The 2017 Santos Tour Down Under will be held from Saturday 14 January until Sunday 22 January and the Santos Women’s Tour will be held from 14 – 17 January 2017.