In the past year or so since our blog went live, we’ve met some pretty incredible people rising to some pretty epic challenges on the bike.

This might well take the cycling cake so far.

In June this year Aussie endurance athletes Julie-Anne Hazlett, Natasha Horne, Sarah Matthews and Nicole Stanners will compete in the Race Across America (RAAM). They will attempt to ride 4,828km across 12 states, 88 counties, 350 communities, multiple mountain ranges, deserts and the Kansas flats. In seven days.

In order to do this, each woman will need to complete approx. 200km riding per day, every day, maintaining an average speed of 32km.

Settle in – you’re about to find out what it takes to get ready for a physical and mental journey that makes your average run-of-the-mill endurance event look like a Sunday spin – on an electric bike.

What makes someone want to relay ride 4,828km in seven days?

It’s all Sarah’s fault. She completed RAAM last year as part of a mixed team, and was determined to return as part of an all-female outfit. She approached Julie-Anne (both of whom are 41 and part of the same triathlon club) with the suggestion of a duo. Not surprisingly, Julie-Anne told her she was insane. She’d need at least two more riders for it not to be crazy.

Julie-Anne recruited the other two team members; Natasha (32) whom she’d met whilst competing at the 70.3 Ironman Cairns where they’d both qualified for the Half Ironman World Championships in Canada, and Nicole (42), who she’d often raced in many different triathlons.

So all four age groupers were already endurance athletes. They had the base, they knew they were more than capable of competing in long distances (Julie-Anne’s fastest bike split for a 70.3 90km leg is a tidy 2:25) and they were willing to take things up a notch.

The Veloroos are half way there and on track for a world record finish!

More importantly however, the four are motivated to raise awareness of women’s cycling – particularly endurance cycling – and raise funds for Tour de Cure. What can they expect on the ride?

It starts in Oceanside California and finishes in Annapolis Maryland. Across the whole distance riders will cover 51km of elevation, most of which will come from the mountain ranges of the Rockys and Wolf Creek Pass in Colorado and the Appalachian Mountains in the East.

With last year’s RAAM already under her belt, Sarah has warned her team mates of the incredible heat. As an Aussie, she thought she knew what it was like to live and compete in hot conditions – RAAM showed her she had no idea what heat really was. Although the long journey will take them through changing temperatures, desert conditions during the day will be in excess of 40 degrees and promise to test even the finest tuned and mentally prepared riders in the mix.

The women’s strategy is to split into pairs and effectively time trial the entire distance. One pair will ride 20 minutes on, 20 minutes off for six hours, and then there will be a changing of the guards. The women are realistic enough to know this won’t roll out like a textbook – they’ll need to be flexible and accommodating of variables such as extreme fatigue, injury, pain, etc. They also want to be able to mix things up enough so that all riders ‘see’ the journey, and they don’t fall into a day shift/ night shift routine.

What are they riding?

All four are heading over with Cervelo S5s, as well as their own time trial bikes. Julie-Anne is on a Cannondale Slice Hi-Mod, Sarah is on a Felt B16, and both Natasha and Nicole are both on Cervelo P3s. Behind every endurance athlete there’s an endurance support crew

And RAAM is no different. The women will be supported by two cars and one RV (which won’t be able to access all areas of the route) shared amongst a 12-strong team comprising a Crew Chief based in Brisbane (Troy Grice), six Sydney-siders, one Bathurst local, one Aussie based in Brazil, one Aussie based in the USA and two Americans. Within that mix is a doctor, two physios and a masseuse as well as Hana, who’s about to become the team Chef.

Find out what happened on day one of the Race Across America!

Good question. The team is arriving one week ahead of the race starting to not only acclimatise, but start sorting out where they will be able to shop for produce and groceries, etc. They know ahead of departure that it will be a challenge to find food without high salt and sugar levels, so Hana’s got her work cut out for her. It will be her responsibility each day to not only source groceries, but determine the nutritional mix and volume of food each woman will require. And she’s got to pull it all together from the kitchen of an RV. We can’t wait to hear more….

Aside from meals, the team will be supported by Clif Bars and gels as well as Em’s Power Cookies, which will be consumed whilst riding.

All women work full-time. Julie-Anne works as Head of Customer Experience for Call Design, a systems integrator. Natasha is a Government Agent, Nicole is Director of Marketing for a major alcohol company (hopefully they’re supporting the women once this is all over!), and Sarah is a Veterinary Surgeon who works mainly night shifts (and has therefore had to train separately to her team mates for most of the lead-up). Because they’re treating RAAM as a time trial, the women have had to prepare with interval training as well as endurance sessions. They’ve spent vast hours on windtrainers and in Turbo Studio sessions. They recently completed a 24-hour straight windtraining test. Julie-Anne went home to bed at the end of it, slept soundly and was up again the next day for a ‘light’ ride, before pushing out 200km the day after that. Such a session has left her feeling positive in the approach to the real deal.

Aside from interval training, the women have endeavoured to spend weekends riding somewhere between 200 – 300km in one day, and then a ‘short’ 150 – 180km the following.

Find out the final result here!

When you’ve ridden RAAM, what on Earth becomes your next Life Challenge?

Good question. Julie-Anne and Sarah are backing it up with the 70.3 World Championships in Austria in August. But Julie-Anne’s not quite sure what challenge will call next. She’s originally from Ireland and has heard there is a race of similar intensity – although shorter – back home, and she quite likes the idea of returning to take that on. There’s also the Race Across Europe. But for now – she’s happy to ‘just’ conquer RAAM. We are pumped by this story and can’t wait to see how the women go – we will be touching base with them and will keep you posted!

If you’ve been blown away by their plans, please consider donating to their Tour de Cure cause.

Jump to our blog for more of Everything Bike! 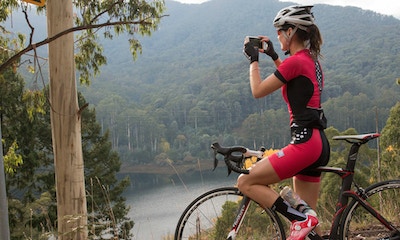