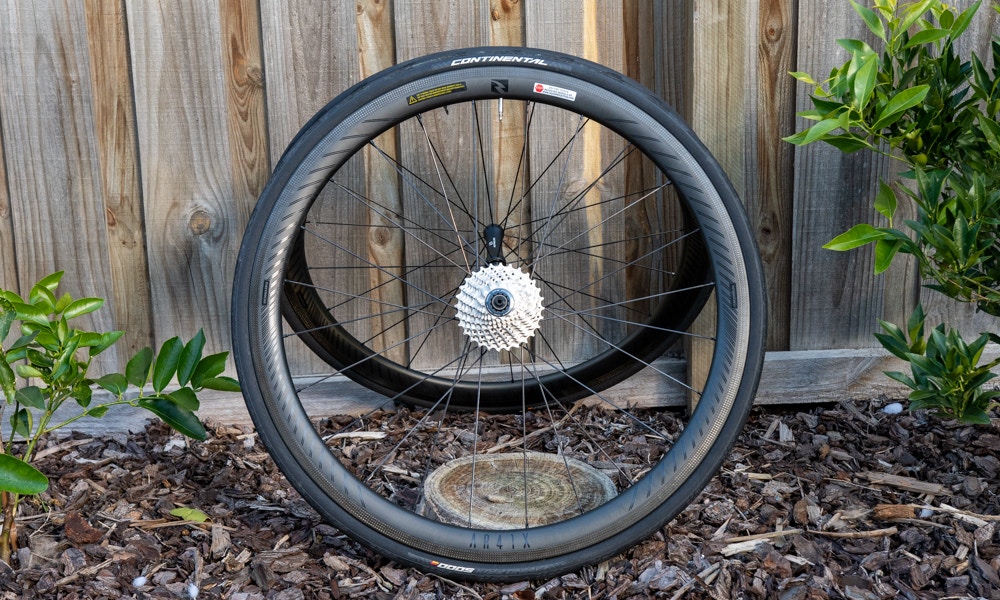 In the hyper-competitive road bike wheelset market, American brand Reynolds has long been favoured by riders looking for an aftermarket wheelset that mixes quality, performance and affordability. First unveiled in late 2018 and rolled out through 2019, The AR series of wheelsets replace the hugely popular Attack, Assault, and Strike, updating the rim profile across the range and refining the wheels in just about every way.

So with thanks to Reynolds Wheels Australian importers Bike Sportz, we recently spent a month or so with a set of the AR41x wheels and set about putting them through their paces to see if their real-world performance matches up to the marketing hype as a “perfectly capable” set of wheels designed for “whatever terrain you ride.”

Who’s it For?: Non-racer enthusiasts looking for a comfortable, endurance focussed wheelset well suited to long days in the saddle.

What We Liked: Modern rim profile, the comfortable ride quality and excellent modulation offered by the textured brake track. 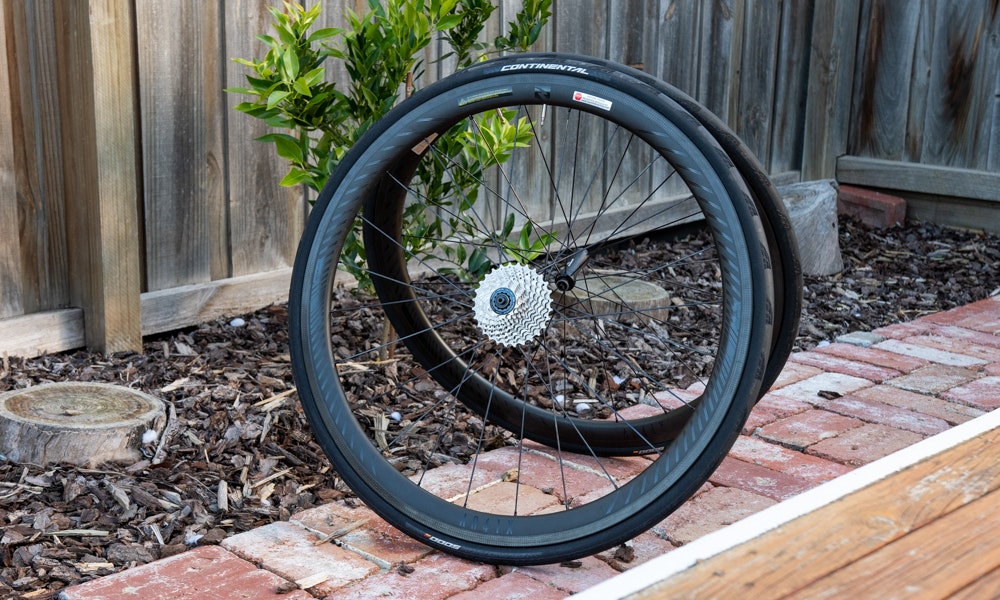 First introduced back in 2009, the Strike, Assault and Attack wheelset range from Reynolds were long regarded as one of the best bang for your buck hoop upgrades around. While the product lineup saw a host of improvements over its nine-year lifecycle, with the AR range, Reynolds has taken the heritage of its predecessors and given it a thorough modernisation. Internal rim widths have been increased; overall widths expanded, weights decreased while tubeless compatibility is included as standard.

Standing for All Road, the range is comprised of the entry-level AR and the ARx (tested). The main difference between the two being the inclusion of bladed Sapim CX-Sprint spokes, a lighter hubset and water transfer graphics for a more subtle aesthetic. Both the AR and ARx wheelsets are available in 29, 41 and 28mm depths and can be had to suit both disc and rim brakes.

Moving to the specs of the wheelset and in keeping with its name, the AR41x rim brake wheelset tested has a depth of 41mm. Reynolds claims a weight of 1480g, while rim widths are 19mm internally and 27mm externally at its widest point. The hubset is said to have 10º of engagement, sure to make for a quick pickup while spoke count is pegged at 20 upfront with 24 at the rear. 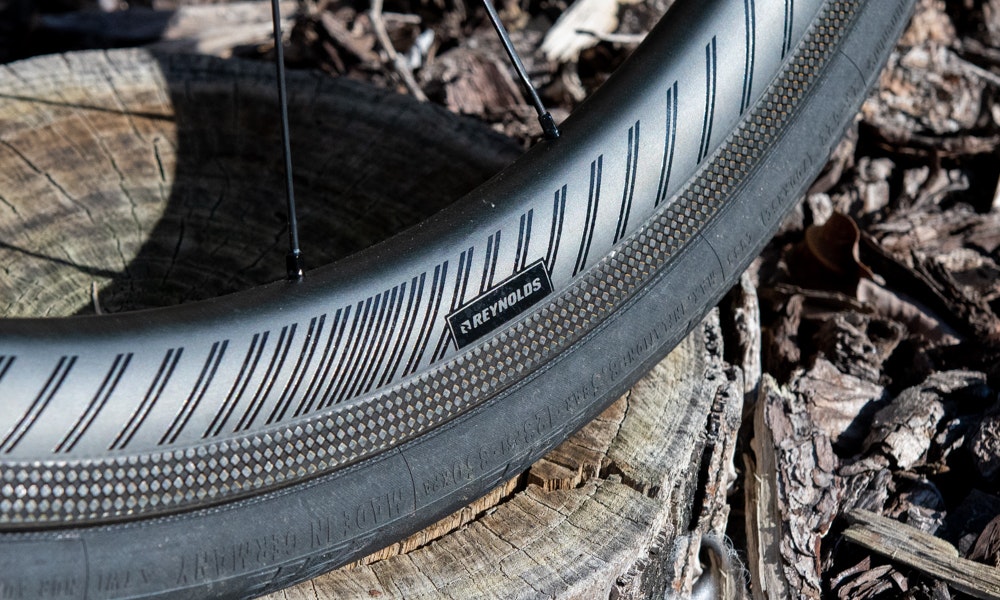 It’s worth noting that those opting for disc-brakes do get a slightly tweaked rim design, with a wider 21mm internal rim width, while external rim widths expand out to 30mm.

Both rim and disc variants of the AR41x are priced at AU$2,399 and are available to suit Shimano/SRAM, Campagnolo and SRAM XD-R freehubs. The wheelset is available right now Australia wide. Check with your nearest bike store for local availability. 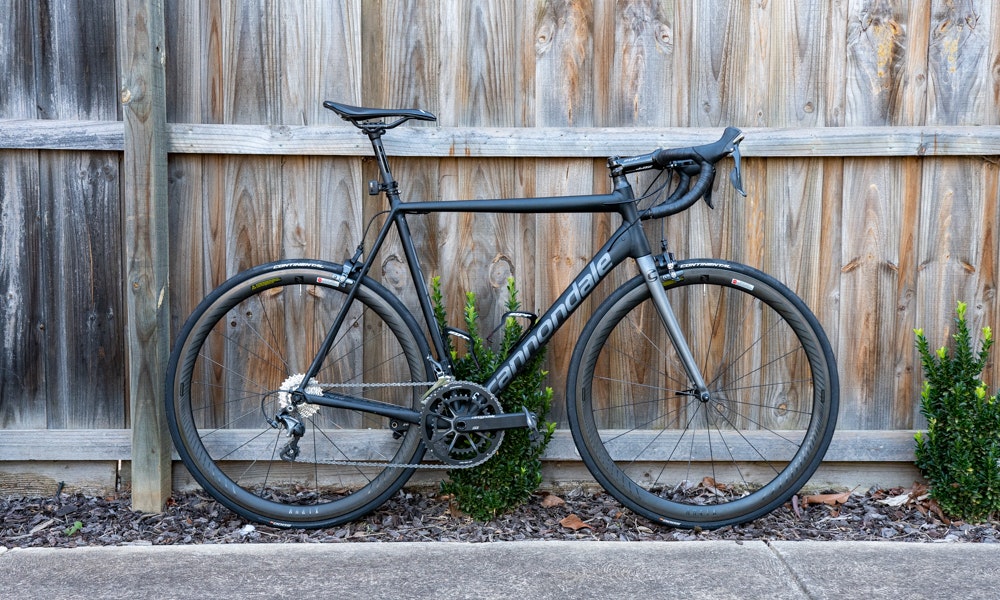 With the AR41x, on paper at least, it looks as if Reynolds is onto a winner, so when the wheelset arrived for review, we were keen to whip them out of the box, slap them on a bike, and put them through their paces.

Along with the wheelset, buyers can expect to find skewers, tubeless valves, Reynolds own blue brake pads and a suite of owners manuals also included. The demo set sent also shipped with a Campagnolo freehub fitted, and a Shimano 11-speed freehub in the box. Switching this over was a 3-minute job and required a couple of Allen keys and a little bit of know-how. With such ease of serviceability, this was an instant a big tick for DIY enthusiasts who prefer to tinker without the aid of the LBS.

For the review period, we opted for 25c Continental GP5000 rubber, simply because I had a new set sitting on the shelf at home for another project. With that being said, I did mount up a set of tubeless Schwalbe Pro One tyres simply to see how easy they were to service. While tubeless tyres can be notoriously difficult to mount, particularly tubeless road tyres, I’m happy to report that both the Continental clinchers and Schwalbe tyres mounted on the generously sized rim with minimal fuss. In the case of the tubeless rubber, they sealed with a floor pump, no compressor or air blast required. 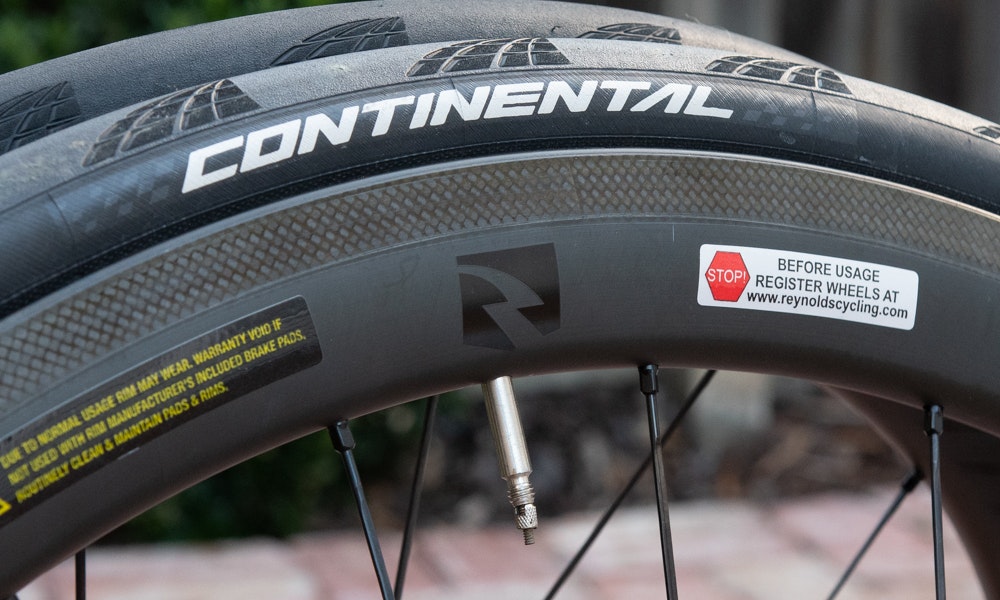 Aesthetically, the water transfer graphics are understated and in my opinion, looked the business on every bike ridden during the testing period. Onto the test mules used to put the wheelset through their paces and I clocked up a similar amount of distance on both my Cannondale CAAD12 and Specialized SL6 Tarmac.

First impressions weighing and handling the wheelset, then mounting the tyres were generally good. The rims, as expected, were straight and true out of the box. On my trusty ParkTool scales, I weighed the AR41x wheelset in at 1475g with rim tape, but without skewers. Internal and external widths were consistent with manufacturers claims too, while the skewers provided a decent hold of the wheelset in the dropouts, so far so good.

For my maiden voyage on the hoops, and for the majority of the test period, I strapped the hoops to my ever-reliable CAAD12 and headed down the coast for a meandering six-hour ride that took in everything from fast flats, rollers, and half-hour climbs with screaming descents. The first thing noticeable was the comfort of the wheelset. With it’s more extensive rim profile, the Continental rubber ballooned out to an external width matching 27mm, which when inflated to 80PSI made traversing the coarse chip seal roads in my area a breeze. With 10º of engagement, the pickup from the rear was impressive, while the four-pawl inner made for a freehub buzz that was well suited to my “louder the better” philosophy.

The depth of the wheelset provided excellent stability regardless of the wind direction or weather conditions, while the recently revamped CTG brake track provided confidence-inspiring brake bite and consistency. There were no inconsistencies to report on the handling front either, both at speed bombing down descents and traversing through town, handling was direct, and as I’d expect with a wheelset of this price range. 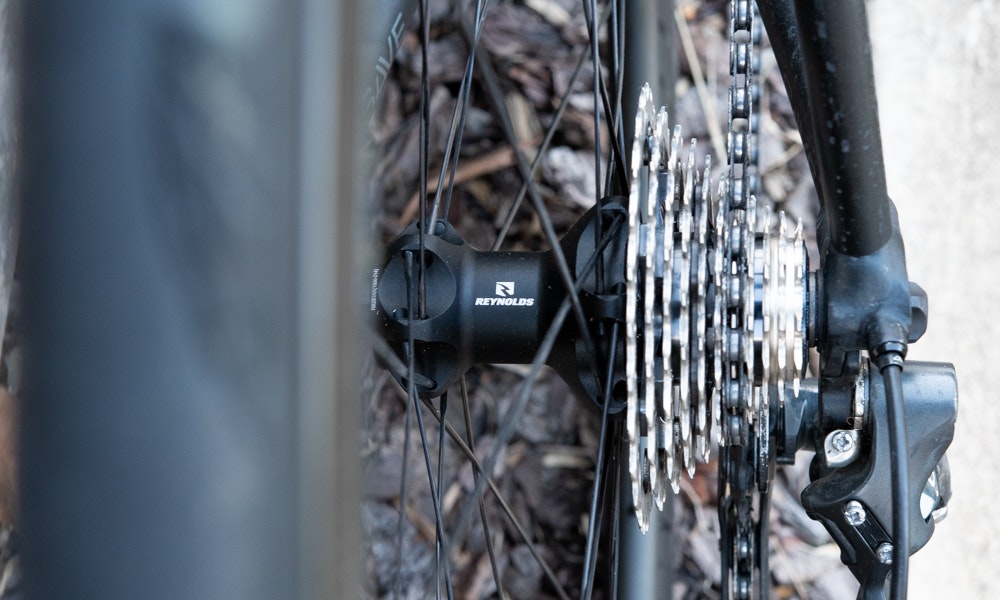 The build quality of the hoops, in general, was impressive, the spokes were evenly tensioned, and the bearings in both the front and rear ran smooth and effortless over the review period. The only downside here was due to a narrower rear hub shell, and as a result, lower spoke tension, was that when sprinting, or climbing out of the saddle, the minimal tyre clearance offered by my bike induced some detectable brake rub. While the brake rub was nowhere near the level reported by other reviewers of this wheelset, it was not a deal-breaker, but present nonetheless. So if you’re looking for a wheelset to hammer around your local crit, options from rival outfits may be better suited to your racier riding style. It’s worth noting that switching bikes, in this case to my SL6 Tarmac Pro with its direct-mount rim brakes and 30mm of tyre clearance, more or less solved the issue of brake rub.

As a rider who hasn’t pinned on a number in over five years, save for in the digital world, being able to sample a wheelset that had more for a focus on compliance, comfort and all-road capability rather than teeth-rattling stiffness and all-out speed was somewhat refreshing. After all, we can’t all be and aren’t all racers...Combine that with the fact that the brake track is up there with the best I’ve sampled on a carbon wheelset and the AR41x started to all make perfect sense.

Much like a Trek Domane, think of the Reynolds AR41x as an ideal companion for those long weekends rides, where Strava segments, max heart rate, and power figures take a back seat to taking in your surroundings and merely enjoying tapping away the kilometres. 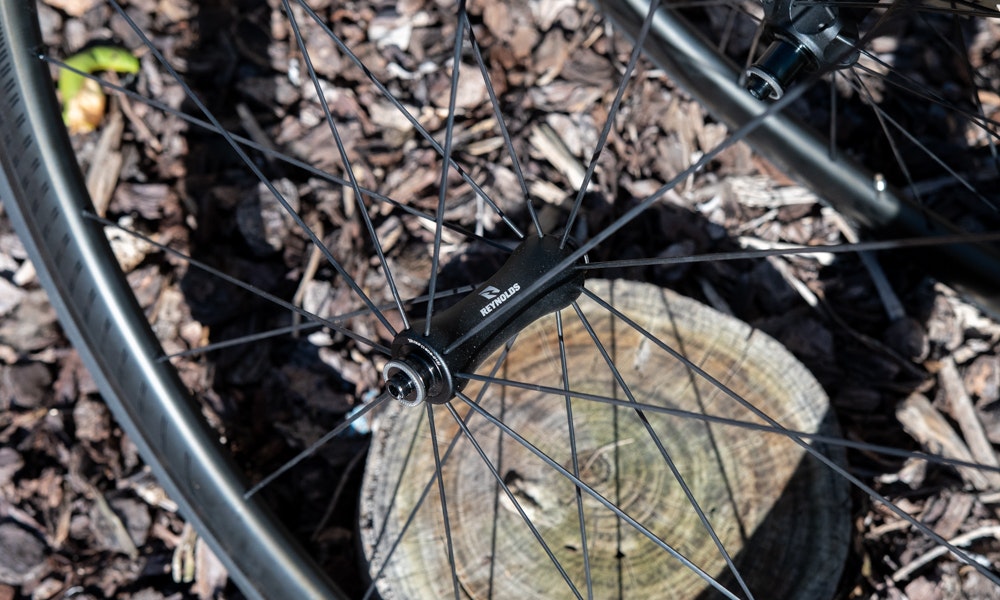 A quick look at the specifications of this wheelset and with its AR41x, Reynolds has created a wheelset that is truly a jack of all trades and a master of none. Light enough to aid riders in scampering up a long climb, deep enough for aerodynamics to affect your speed and wide enough to allow modern tyres to absorb more than their fair share or road buzz, however, not class-leading in any of these areas.

While the intended use of the wheels may rule them out for some, the fact that their pricing has them competing with the likes of ENVE with its foundation series and Zipp’s entry-level 302 and 303s wheelsets, this may be the most significant barrier for potential buyers to overcome.

However, much like its predecessors, the AR41x still poses a quality value-proposition and if you, like me, value comfort and versatility in a wheelset and aren’t likely to pin on a number any time soon, this is one set of hoops worthy of your consideration.

BikeSportz Australia provided the product for this review, and the wheelset was returned after the review period.

Looking to update the rolling stock on your ride? Check out the wide range of Wheelsets for sale from leading retailers and brands across the country right here, at BikeExchange.