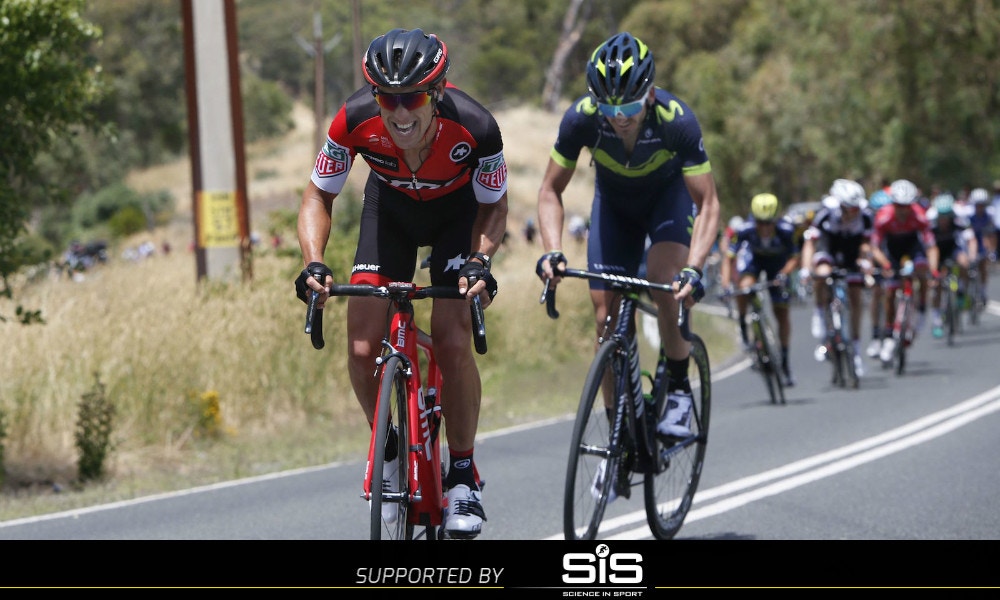 PARACOMBE, Australia (CT) – Richie Porte (BMC) has won the second stage of the Santos Tour Down Under with a confident acceleration in the final 2.5 kilometers of the race.

Porte attacked on the toughest section of the 10-kilometre climb to Paracombe with Gorka Izagirre (Movistar) and Esteban Chavez (Orica-Scott) following closely behind. The duo were unable to match Porte’s pace however and rounded out the podium with second and third respectively.

“I think I’ve got a good gap on general classification,” Porte told reporters after the stage. “I know it’s not over, a few quite hard stages, but the guys, the team are fantastically strong. So you know, I’m quite confident.”

“Wilco Kelderman put in a big turn at the bottom and kinda blew it apart. I know I’ve got good climbing legs and I didn’t really want to wait around. To be able to ride away like that gives me good confidence.”

In a turn from yesterday’s 40ºC+ scorcher which saw stage one shortened, today’s temperature was much more tolerable for the riders at a mild 25ºC.

Earlier in the day Jasha Sutterlin (Movistar) attacked after the first intermediate sprint and stayed away on his own until 35 kilometres remaining with a maximum gap of 4 minutes and 40 seconds. No team seemed to want to control the peloton until Orica-Scott took up the chase at 90 kilometres to go.

They kicked the hornets nest enough to get other teams to share the workload, with Sky and BMC taking over responsibility and bringing down Sutterlin’s lead to just over three minutes.

With Sky doing much of the pacemaking, the lone Sutterlin was quickly brought back at about 35km remaining and the race was all together. Orica-Scott and Movistar drove the pace hard leading into the final climb up to Paracombe. Sutterlin’s move set up his Movistar team perfectly to soften up the peloton and put their main climber, Gorka Izagirre, into position.

Sergio Henao (Sky), one of the pre-stage favourites, had to use a lot of energy to get back to the peloton with the help of his teammates after a wheel change that saw him saw him drop off the back in the closing kilometres. BMC’s Rohan Dennis (BMC), who won stage three to Paracombe in 2015 en route to overall victory, also needed a wheel change after the descent of Norton Summit and was dragged back by teammate Miles Scotson with good positioning heading into the climb.

With the peloton largely together and the stage’s toughest 2.5 kilometres remaining, Richie Porte (BMC) was the first to attack and then accelerated again once caught. No rider was able to match Porte’s pace.