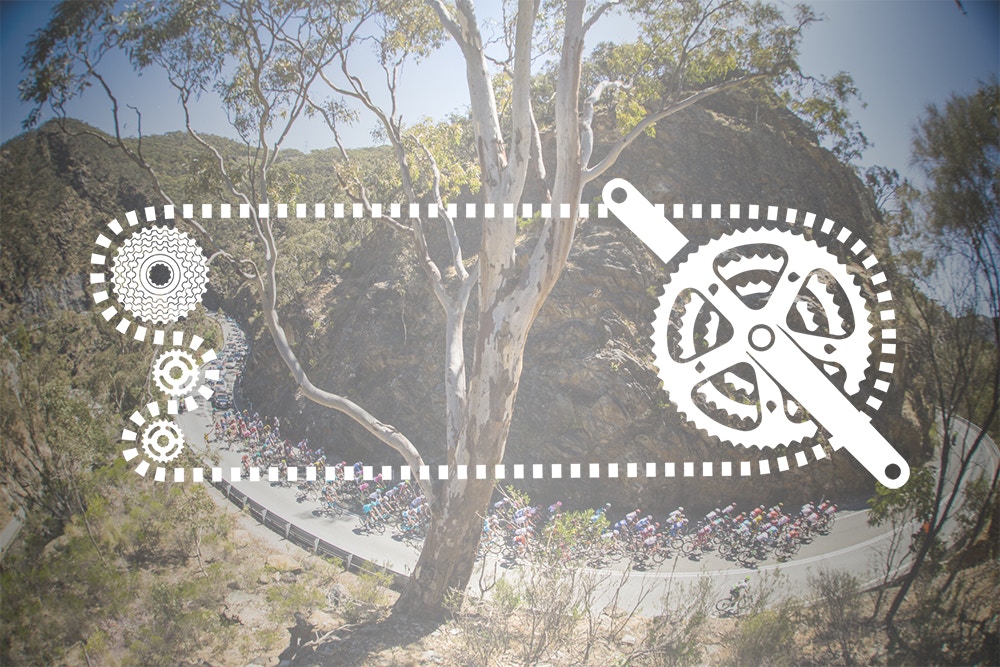 Consisting of the cranks, chainrings (front cogs), chain, cassette (rear cogs), brakes, derailleurs and shifters a groupset is a closed circuit that propels your bike and brings it to a stop again. As you work up the groupset hierarchy, materials change, components decrease in weight and often increase in price as a result. With that in mind, there are a number of things to be aware of when it comes to the engine room of your bike, including the features of electrical and mechanical drivetrains, things to look out for any other differences you may come across on your search for the perfect groupset.

So without further ado, join us as we take an in-depth look at road bike groupsets.

Pressed for time? Jump directly to each section below.

The Difference Between Mechanical and Electronic Groupsets

Each major groupset provider offers multiple mechanical and electronic options with different names and operating procedures. In the electronic shifting variants, Campagnolo has 'EPS' which stands for 'Electronic Power Shift', Shimano has 'Di2' which stands for 'Digital Integrated Intelligence', and SRAM have 'eTap', which stands for 'electronic tap'. Campagnolo and Shimano both use wires that actuate the front and rear derailleur via the trigger at the shifters. SRAM eTap was the first completely wireless groupset,. which now uses a proprietary protocol called AXS. This works in a similar way to ANT+ or Bluetooth to communicate between the shifters and derailleurs as well as other products in the SRAM AXS product family.

Mechanical shifting works via cables that are attached to the shifters, and run via the frame (internally or externally) to the front and rear derailleurs. Moving the shift lever pulls or releases cables, which then activates the derailleurs to either shift up or down. The benefits of mechanical shifting come in the form of a weight reduction, decreased cost and a more “natural” shift feel. Conversely, the downsides of mechanical shifting is that is as often not as flawless as it relies on the cables to be in perfect working order. Additionally, frames with long frame tubes and acute angles can make installing cables difficult and decrease the performance of the whole system if it’s not regularly adjusted.

Electronic shifting works via wires attached to the shifters and derailleurs that transfer a signal, or via wireless technology similar to Bluetooth or ANT+ devices. The benefits of electronic shifting are the precise shifting, the lack of deviation from the set adjustment, easier shifting at the lever, decreased cable routing difficulty, programmable shifting, and downloadable information on shifting habits and efficiency. The downside of electronic shifting is the system breaking down if batteries are not charged, increased price and generally heavier weight when compared to their mechanical counterparts.

The clear market leader, Shimano has the largest range of road specific groupsets and is a favourite with professional teams too. Shimano pioneered the STI (Shimano Total Integration) lever, which is the most commonly used lever today. The ingenious system allows the user to change gears up or down and brake with one hand. The right-hand lever controls the rear derailleur and front brake (brake orientation can change based on country), while the left-hand lever controls the front derailleur and rear brake. The STI lever allows for multiple shifts and means never having to move your hand position to slow down or change gears. To operate, the brake lever swings inwards to pull the derailleur in one direction, with a smaller shift lever sitting behind the brake lever which releases the cable for the derailleur to go the opposite direction.

Campagnolo is the longest standing groupset manufacturer and has been actively innovating within the cycling industry for over 80 years. Many riders have a romantic notion of the Italian company thanks to its longevity, aesthetic and reputation for high-end products. The vast majority of work on Campagnolo components still takes place at the company’s headquarters in Vicenza, Italy.

Campagnolo has five groupsets but enters the road market at a higher price point than both rivals SRAM and Shimano. As such, it's rare to see a Campagnolo groupset on a budget road bike, but very common on high-end Italian road bikes and expensive bespoke creations.

Campagnolo levers feature curved hoods to improve ergonomics and unique shifting, a single lever behind the brake lever is used to go to an easier gear, while a small thumb lever on the inside of the hood is used to go into a harder gear. This design makes it virtually impossible to mistake an upshift for a downshift and vice versa. It's also said to allow easier access to shifting while in the handlebar drops and covering the brakes.

As well as being lightweight, SRAM is well known for its 'YAW' angle technology. In this, SRAM's front derailleur cage has the ability to rotate as the gears change to maintain a consistent angular relationship with the chain. This optimises chain alignment and is said to improve shifting performance while reducing chain rub.

Shifting with SRAM is controlled by 'Double Tap' technology, utilising only one lever to change up and down, which is separate from the brake lever. Double Tap features throughout SRAM's road range and incorporates 'ZeroLoss' resulting in 'instant and precise' gear changes. It's a bit odd to explain, but a single shift of the lever actuates the derailleur in one direction, continue to push the lever and the derailleur is actuated in an opposite direction. 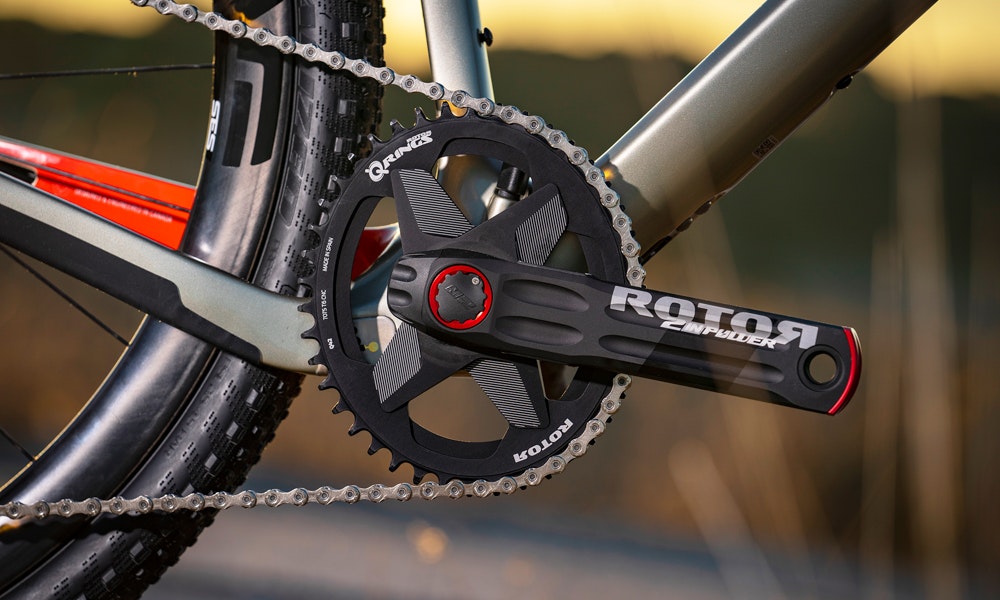 Whilst the three manufacturers above definitely dominate the market in terms of popularity, there are a number of other manufacturers in the industry who are looking to shake up the market. See below for a brief detail of some other options to consider. 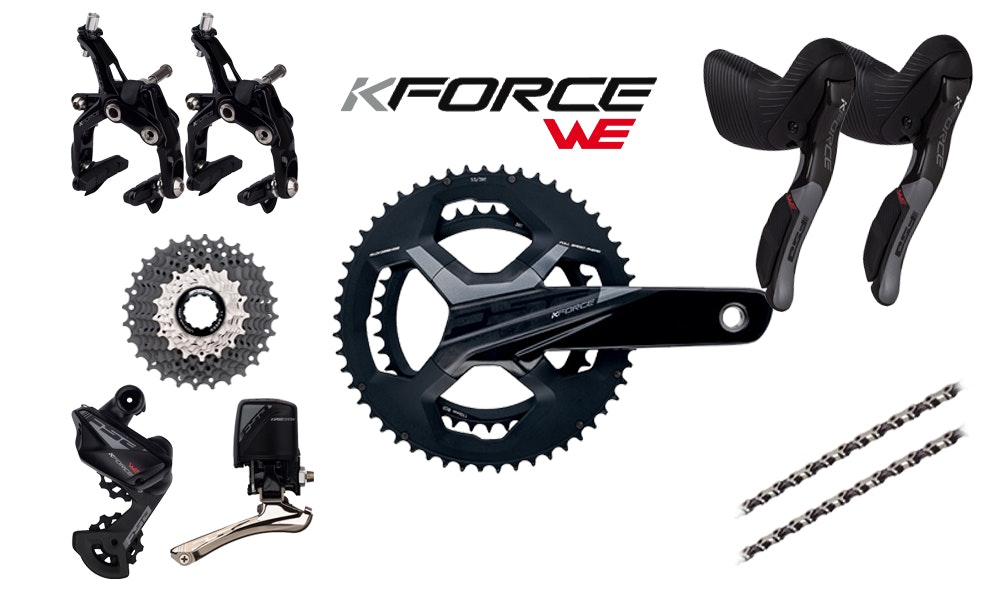 Below is a table that highlights what type of riding each groupset is best suited to, where each sits in the overall hierarchy, and how they compare to each other. 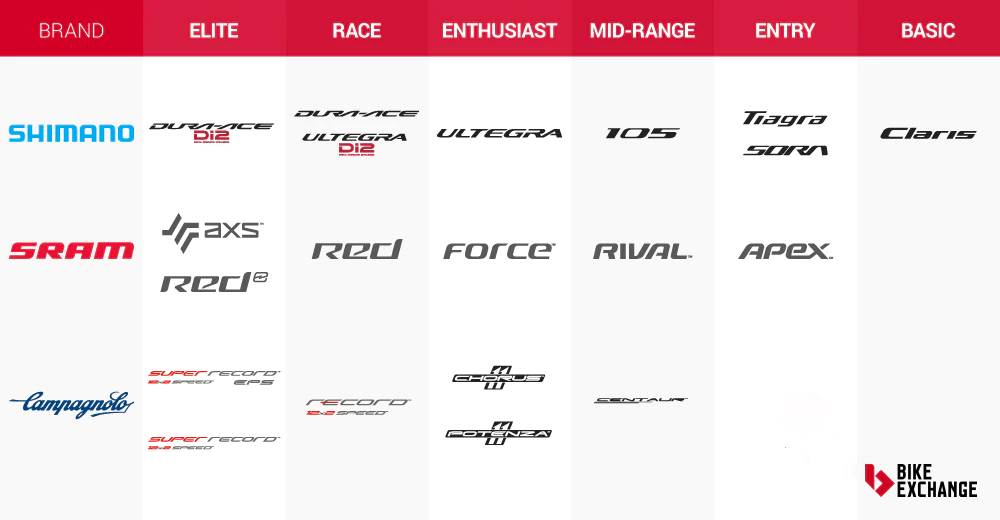 Traditionally there will either be two or three chainrings on the front, although in recent times some road bikes, particularly gravel bikes, have followed the mountain bike trend of having a single chainring. Having a single chainring minimises potential mechanic issues and simplifies the shifting to the rear cassette, especially given the increasing popularity of 12-speed groupsets for the road. However, despite this, the majority of road bikes will have either two or three front chainrings, although three front chainrings (known as a 'triple') are commonly reserved for recreational, entry-level or touring bikes. 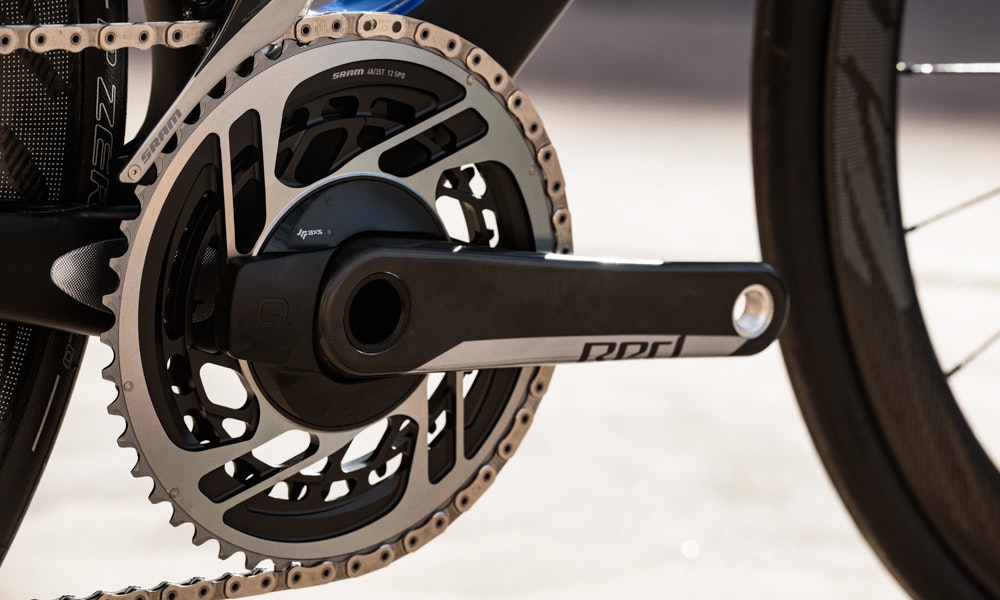 A 'triple' will normally have a 50-tooth large chainring, a 39-tooth medium chainring and a 30 tooth small chain ring.

The front chainring set-up is the foundation for the gear ratios, which the cassette on the back compliments. The cassette is made up of a number of cogs or sprockets which can be changed to make the gear ratio easier or harder. Modern-day cassettes feature 11, or 12 sprockets providing up to 24 gears when paired with two front chainrings but older and more entry-level groupsets have either 8, 9 or 10-speed cassettes. Groupsets with a different number of cassette sprockets require the same speed components throughout the drivetrain to work effectively, you can't simply swap an 8-speed chain with an 11-speed chain and expect it to work. Equally, even groupsets with the same amount of gears (105 and Ultegra for example) will not perform as well when the components are mixed, than if they are all the same. 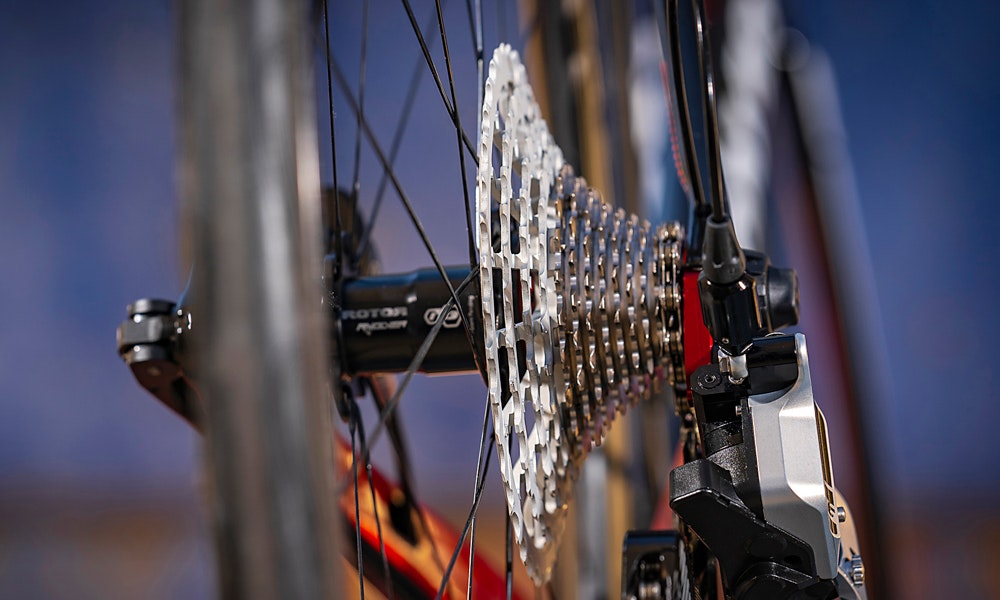 The most common ratio on an 11-speed cassette is an 11-25 or 11-28, whereby the smallest cog has 11-teeth and the largest cog has either 25 or 28-teeth. The cogs in between these two have a spread of teeth aimed to make shifting between gears a smooth progression. The larger the difference between the smallest and largest cog on the cassette, the greater the chain has to move and the less consistent a rider's cadence becomes between gear changes.

Choosing a bike with smaller chainrings on the front and a larger ratio cassette on the back will provide a greater spread of gears and easier pedalling ratios. A bike with larger front chain rings and a smaller ratio cassette on the back will be more targeted for speed, provide less range of gears and provide consistently smaller changes to a rider's cadence than a cassette with a larger ratio.

Crank length tends to vary according to the size of the bike and rider height. Typically, groupsets will range between 165 mm and 180 mm but aftermarket creations can be made to any length. Most bikes will come with cranks between 170 mm and 175 mm. There is much debate about what constitutes the 'correct' crank length but comfort and efficiency should be the two main priorities when deciding. If you are getting issues with your knees, hips or lower back, look at your crank length in addition to the usual factors like seat height, frame size and flexibility. Adjusting crank length will also require an adjustment to your seat height and potentially other areas such as handlebar height and reach.

Longer cranks: Longer cranks create more torque due to the increased leverage, but require greater force to turn over. The longer the crank the harder it is to maintain pedal efficiency, as it is harder to maintain consistent leverage throughout the pedal stroke when compared to a shorter crank. The longer crank will also require a greater range of motion, producing a straighter leg at the bottom of a pedal stroke and a more acute angle at the top. Ground clearance is also reduced, which could be problematic on tight corners or if you plan to go off-road. Another potential turning issue is the reduced clearance between your toe/shoe and the front wheel.

Shorter cranks: Shorter cranks require less effort to turn over, but have less leverage and produce less torque as a result. A sign your cranks are too short is if you have trouble producing power on flat roads but not riding up hills. Track riders will typically opt for shorter cranks to keep their cadence high and reduce the initial force required to turn over a gear (as they are on a fixed gear and can't change up or down as their pace increases or decreases). Shorter cranks require less flexibility as the range of motion is reduced, but this reduced range of motion can also be an opportunity to move the rider into a more aggressive position without compromising hip angle or reducing power. 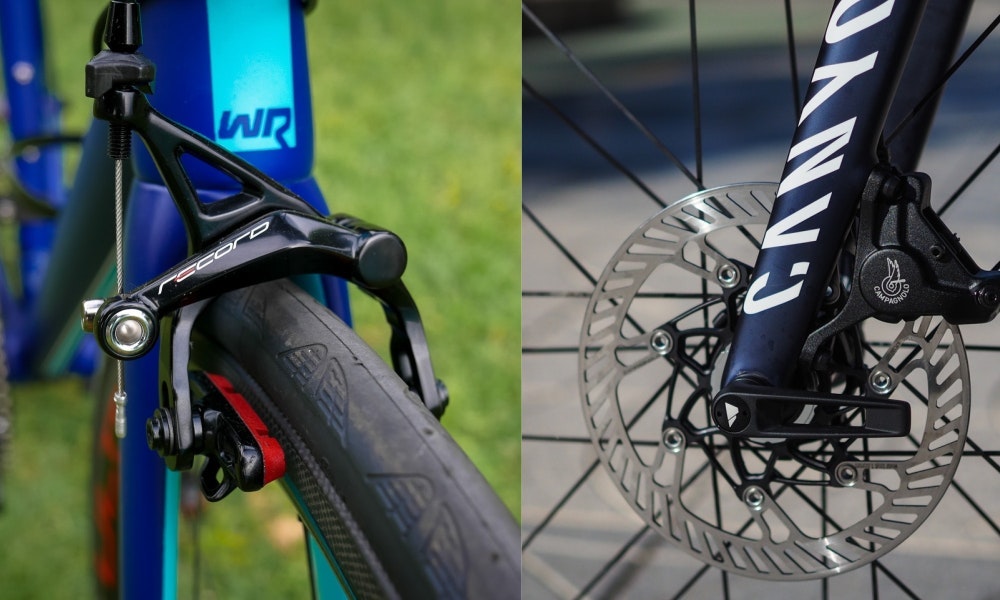 Type and quality of brakes will differ from groupset to groupset. There are now four brake types available, none of which are necessarily dependent on the price. The four options are cable operated rim, cable operated disc, hydraulic rim and hydraulic disc brakes.

As with most other elements of the groupsets, as the price increases so do the quality of materials used, which provides lower weight, better modulation (brake control), durability and reliability.

BikeExchange is your online destination for road bike groupsets and bike parts, or if you’d prefer a more hands-on approach, search for your local bike shop to get further assistance. 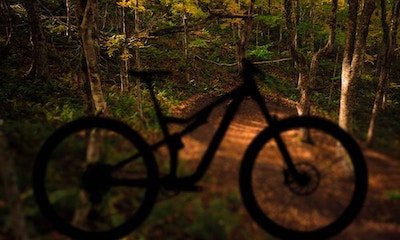 In the market for a new Trail Bike? Whether it’s an upgrade or your first ride, our guide to the best mid-range Trail Mountain Bikes is a great place to start... 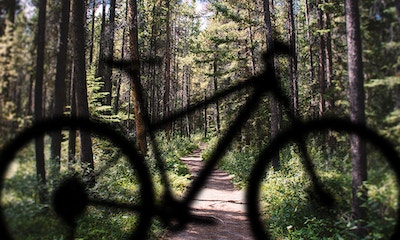