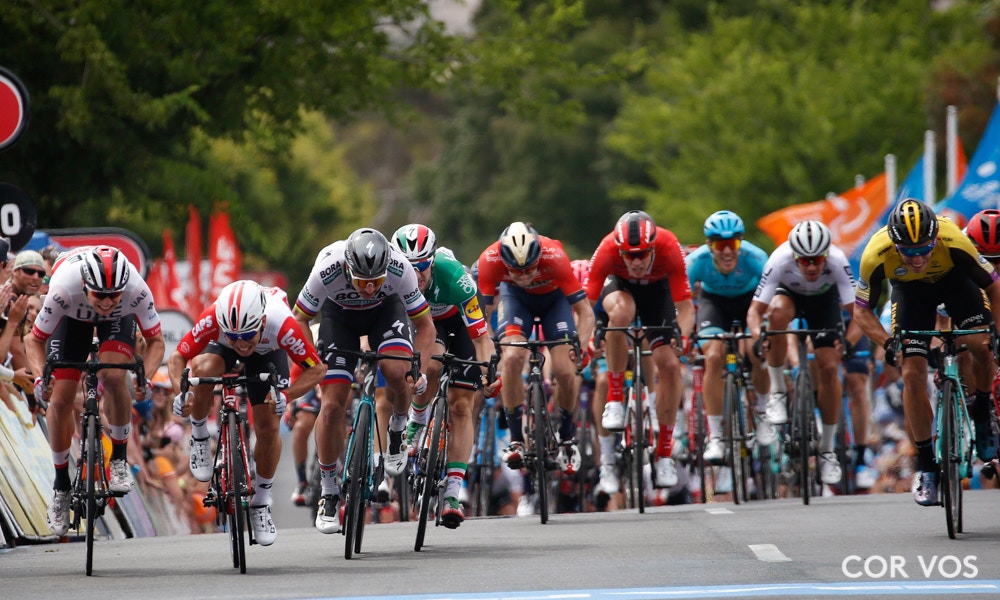 STRATHALBYN, Australia (CT) – It was a hard and windy day in the saddle for the WorldTour peloton as Jasper Philipsen (UAE-Team Emirates) has opened his account for 2019, taking out Stage Five of the Tour Down Under.

On a day where crosswinds and crashes wreaked havoc on the peloton and the GC favourites, it was harder than expected for the peloton as they made their way from Glenelg to Strathalbyn. Jumbo-Visma has set a stifling tempo at the front of the bunch, shelling riders left, right and centre as the bunch charged towards the line. With just 10 km to go, current Ochre Jersey holder Patrick Bevin hit the deck hard. His team paced him back to the main bunch just as the sprint trains ramped up the pace, averaging 67.5kph over the last 3km into the line. The fast men of the peloton then took over, with Ewan timing his sprint to perfection, burning off all comers to take what he thought was his first stage win for 2019 and the first in his new Lotto-Soudal colours. However, following the race, he was relegated for unsafe conduct as a result of a series to headbutts to Philipsen himself, handing the win to his rival. 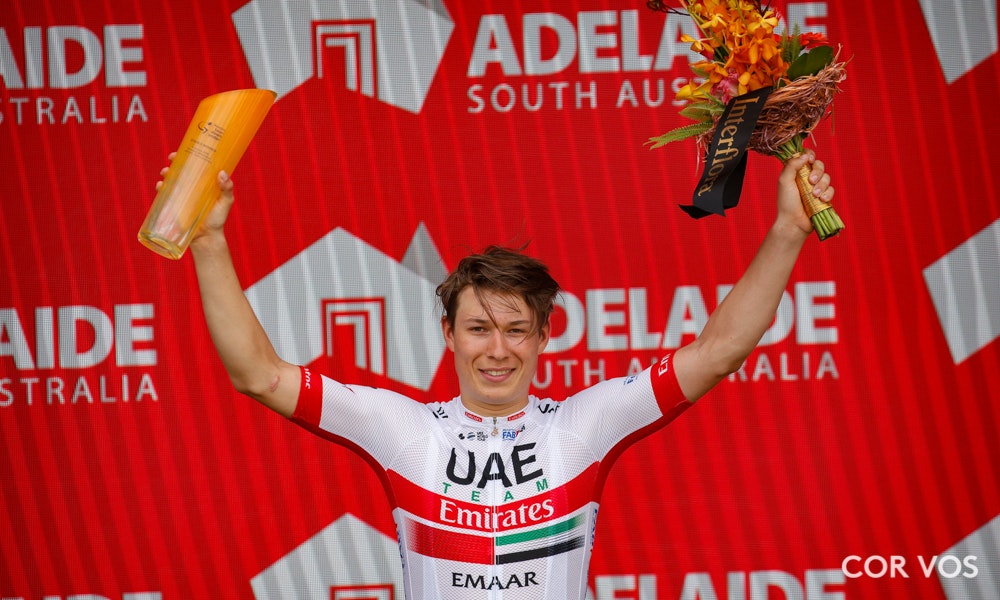 The 149.5km stage began at 11.30am, slightly later than usual, and cooler conditions greeted the riders.

Jason Lea (UniSA) was again on the attack early, joined by team-mate Ayden Toovey and AG2R La Mondiale’s Clement Chevrier. This trio was concerned with the climbing points at the Sellicks Hill (44km).

Toovey set the pace, Lea followed and Chevrier did his best to beat the rider in the polka-dot jersey to the top of the only categorised climb of the stage... but Lea was too strong and added first-place points to his tally.

The escape gained only a small advantage, around 20 seconds. Once the climb was over, it was time for Mitchelton-Scott to set up Daryl Impey to chase points and time bonuses at the intermediate sprint. Yesterday’s stage winner duly claimed first place for the Ziptrak prime at Myponga (47km); ranked second on GC, he got closer to the ochre jersey that he won in 2018... but not much. You see, Paddy Bevin was second, meaning both riders at the top of GC increased their respective advantages but Daryl also knocked off one second to his deficit to Paddy. Impey’s effort was reversed at the second intermediate sprint: Bevin beat Impey to the line at Inman Valley (74km). Immediately after the second sprint, Mathieu Ladagnous (Groupama-FDJ) was on the attack. He was chased down by one of the early escapees, Toovey (UniSA). They enjoyed a lead of 40 seconds but were caught around the 35km to go mark. 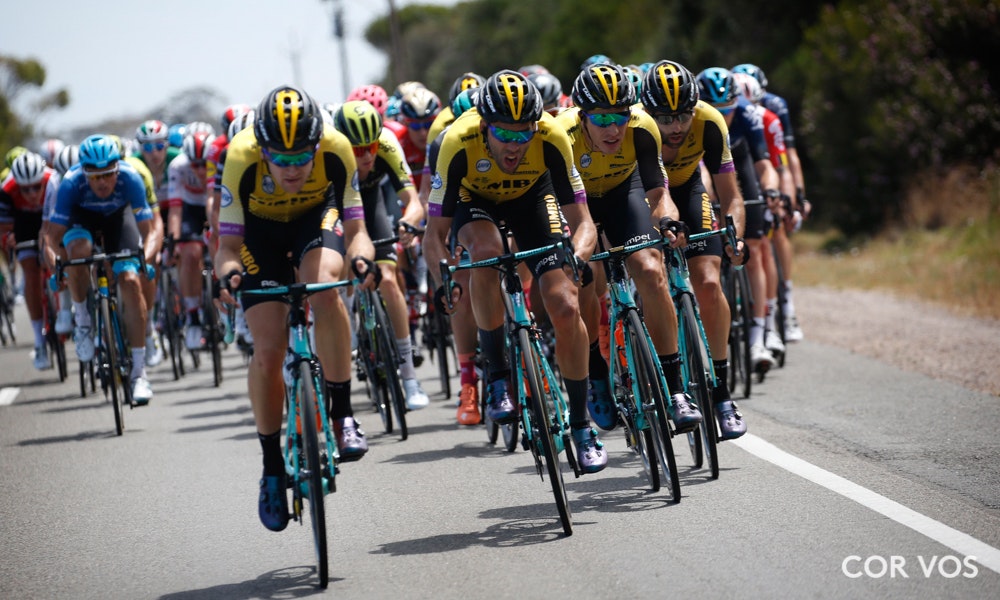 With 32km to go, the Dutch Jumbo-Visma team raced to the front and split the peloton. Team Sky was the first to respond in numbers. It was a solid effort and, for a while, it seemed as though Impey may have been one of the riders caught up... but the surge, as hard as it was, didn’t last long. Sky was the next to try: with 21km to go, Luke Rowe and three others moved to the front. They were joined by Bora-Hansgrohe riders and the effort spat a selection of riders out the back of the pack. After a few kilometres with the bunch strung out, there was another regrouping.

With 9.8km to go, the race leader was caught in a crash that involved about 10 riders. Bevin was tangled in bikes and clearly in pain. It took him considerable time to get back on the bike but he was supported by all his CCC team-mates once he remounted his bike and started to chase. Bevin landed heavily. There was a brief pause in effort by the peloton out of respect for the race leader. With 6km to go, the pace lifted again and Deceuninck-Quickstep, Jumbo-Visma and Mitchelton-Scott were at the front of the bunch, while several hundred metres separated Bevin from the main peloton. Lotto-Soudal also arrived in numbers at the front of the bunch. At the time of the chase, the average speed was up at 70km/h (assisted by a tailwind and slight downhill) but Bevin rejoined the peloton with about 3km to go.

Young Belgian rider, Jasper Philipsen of UAE Team Emirates tussled on the run into the line with Ewan, resulting in Ewan's relegation and the young Belgian scoring his first WorldTour win with an impressive turn of pace in the frantic sprint into a headwind in Strathalbyn. 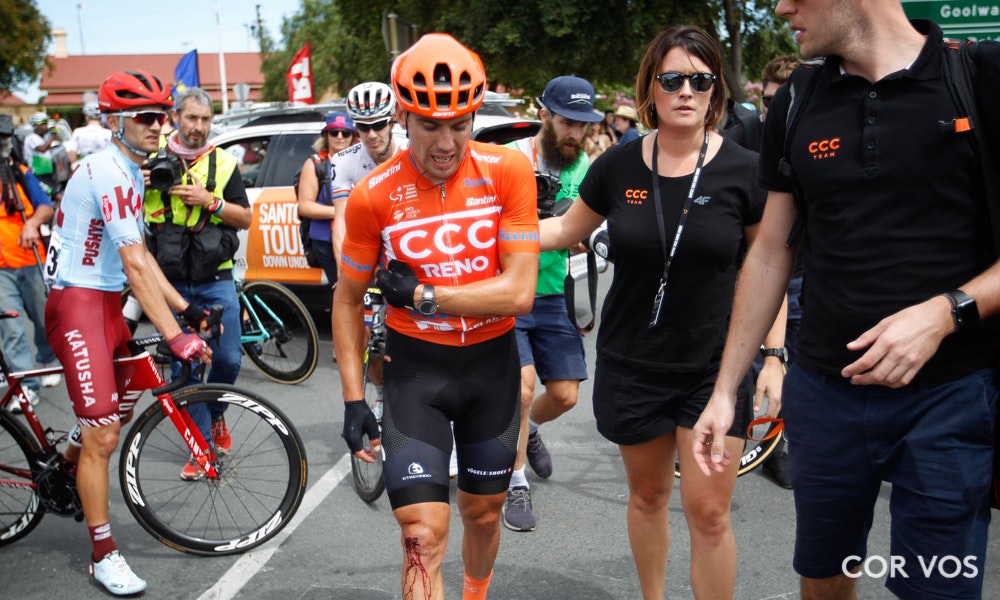 We wait to see what the medical report is to find out if Bevin can indeed continue the race that he’s led since winning stage two on Wednesday. Meanwhile, the news of Ewan's relegation came as a shock to the Lotto-Soudal team as it waited patiently in the bus for the podium protocol to finish