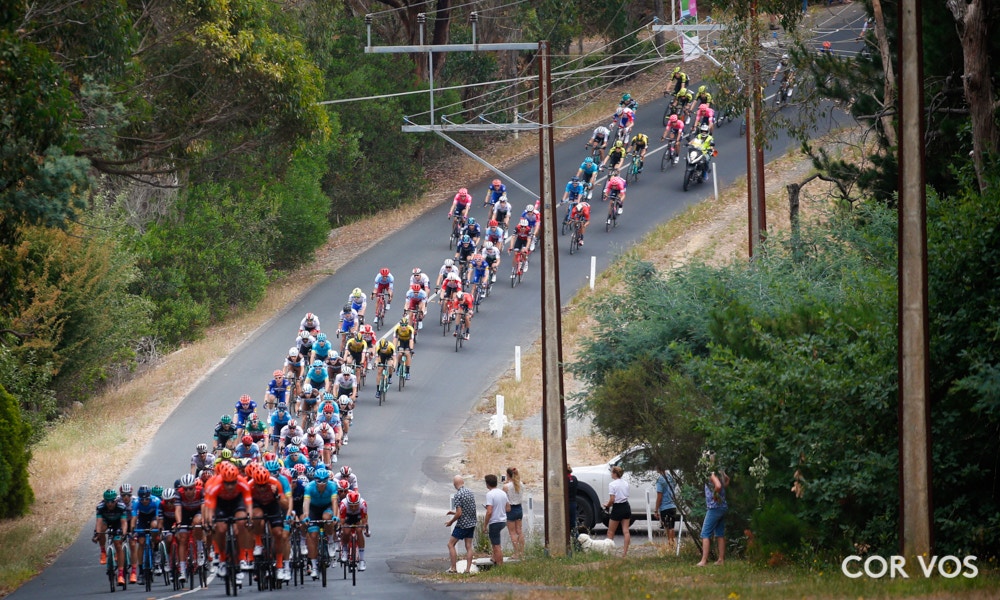 CAMPBELLTOWN, Australia (CT) – In what was a welcome respite from the heatwave ravishing the peloton, Daryl Impey (Mitchelton-Scott) has outpaced his rivals to take out Stage Four of the 2019 Tour Down Under.

One of the most decisive stages in this year's Tour, the punchy Corkscrew Road climb set the stage for the final run into the line. An elite bunch consisting of GC favourites, Richie Porte (Trek-Segafredo), George Bennett (Jumbo-Visma), Wout Poels (Team Sky), and Michael Woods (EF Pro Cycling) jumped clear to distance the chasers over the final climb of the day. However, the wide fast run downhill to the line provided ample opportunity for the remnants of the peloton to catch up with the escapees, all but assuring a reduced bunch gallop for the line. Making up for his errors just 24 hours previous, Impey timed his sprint to perfection, crossing the line just ahead of race leader, Patrick Bevin (Team CCC)

How It Was Won

Lucas Hamilton, the 22-year-old Victorian, received a hearty round of handshakes, hugs, and words of praise from his team, pacing impey up the Corkscrew. Impey might have been the one winning the stage, but Hamilton played a vital role.

The plan had been for Hamilton to ride his own tempo on the steep section of the late Corkscrew Road climb, then be there for Impey afterwards.

“Lucas, well the win was actually due to him,” Impey said. “He did a great job. [He’s] still a young professional but we had a plan in the beginning that he was going to ride his own climb and kind of wait for me in the middle of the climb, which he did.”

Impey and Hamilton crested the climb together as part of a 16-rider chase group, with a 5km descent between them and the finish line. Just up the road were climbers Richie Porte (Trek-Segafredo), Wout Poels (Sky), George Bennett (Jumbo-Visma) and Michael Woods (EF Education First), the quartet having formed after a Woods attack on the steep section on the climb.

Impey and Hamilton remained calm, the latter helping his leader (and the chase group) bridge across with just 2km to go.

“I think with that descent it’s quite hard to stay away because it’s quite flowy and when you have a bigger group behind you, the bunch rolls a bit quicker down there,” Hamilton told CyclingTips. “We knew that guys like Richie and Woods and that were going to ride away [on the climb] and so when that happened we weren’t stressed out.

“There was a lot of the guys that had something to lose by those four staying away so I only had to do maybe around two, three k to go — I got on the front and they were in sight and then I just sort of pulled it back. Then after that I was just trying to keep the pace on enough that no one could attack over the top and get away before the finish.”

It was a group of 20 riders that got to the finish where Impey was able to outsprint overall leader Paddy Bevin (CCC) and Luis Leon Sanchez (Astana).