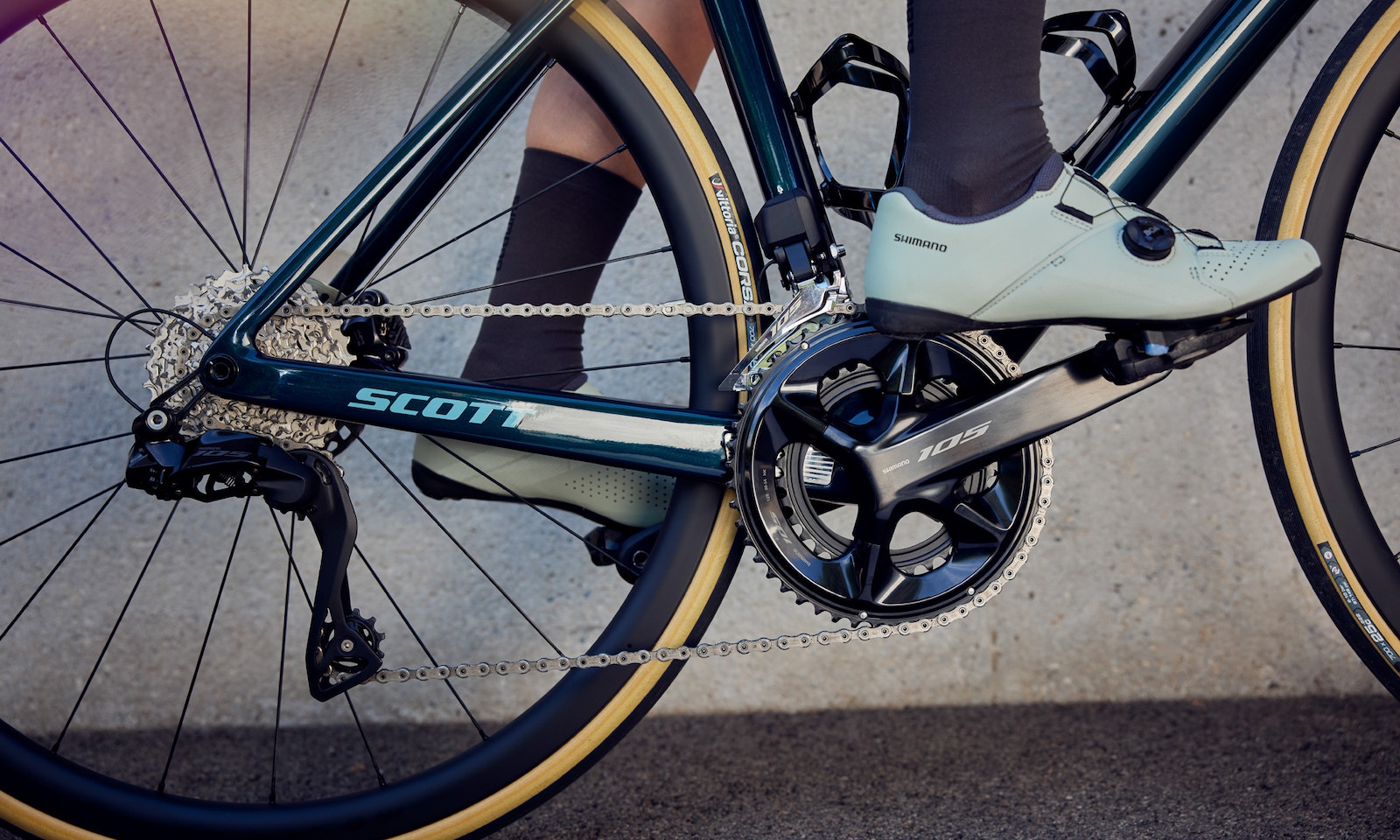 Less than a year after Shimano pulled the curtains back on the latest iterations of its flagship and enthusiast-level Dura-Ace and Ultegra road groupsets, the Japanese outfit is at it again, trickling down its 12-speed Di2 technology to the workhorse 105 groupset. With a host of updates and refinements over its predecessor, read on for ten things to know about the all-new Shimano 105 R7100 Di2 groupset. 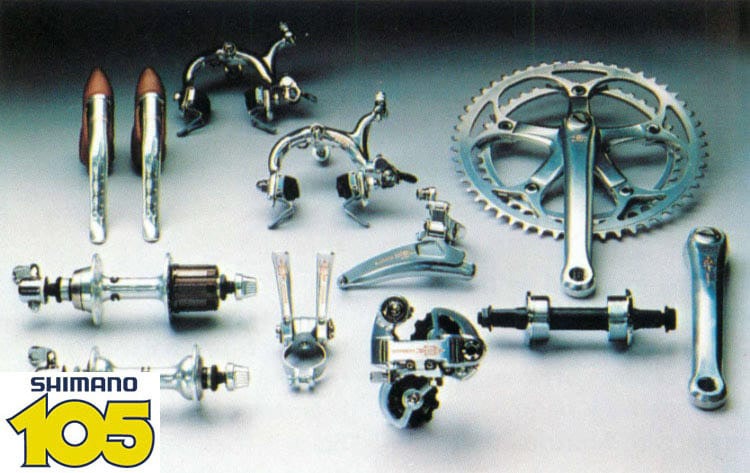 Dubbed initially “Golden Arrow” and developed for urban and sports riders in 1982, 2022 marks the 40th anniversary of what would eventually become the 105 groupset. The focus of the groupset has remained steadfast over its 40-year lifespan, with versatility, affordability and wide-reaching appeal at its heart. Four short years after bursting on the scene, the 105 moniker was given to the set and has since established itself as the workhorse series in the Shimano product line-up. Over nine iterations, the road-focused group has benefitted heavily from its Dura-Ace and Ultegra (formerly 600 Series) stable mates, working from 7-speeds through to the 12-speed set released today, with refinements coming to everything from the hubs to the cranksets and braking systems. 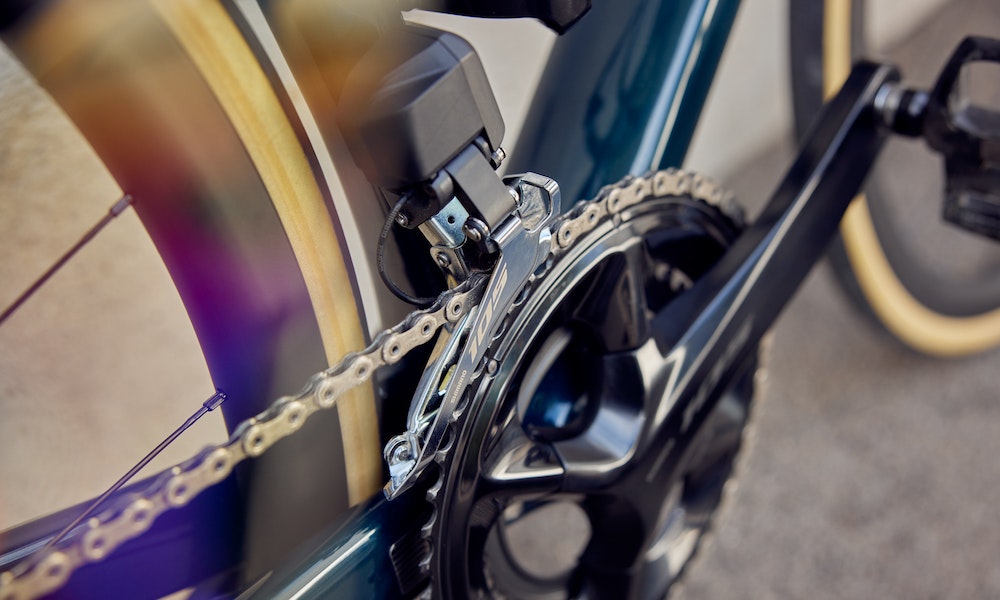 Like its ancestors, the latest R7100 iteration of the 105 groupset benefits heavily from trickle-down tech borrowed from its more racing-focused stable mates. Among these is the semi-wireless Di2 shifting system. The latest Di2 groupsets feature a wireless connection between the shifters and the rear derailleur, making for an uncluttered cockpit free from additional cables and wiring. Much like its stablemates, the rear derailleur is the system’s brain, handles charging duties, facilitates wireless connection to the shifters and external systems like your smartphone to tweak the shift settings and so on.

The rear derailleur, front derailleur and battery are still connected via Di2 wiring to ensure maximum uptime and durability as they are primarily concealed within the bike’s frame. The latest R7100 groupset features much of the same shifting performance celebrated at the Dura-Ace and Ultegra levels. The key difference is that 105 features an increased gear range to tackle a wide range of terrain. 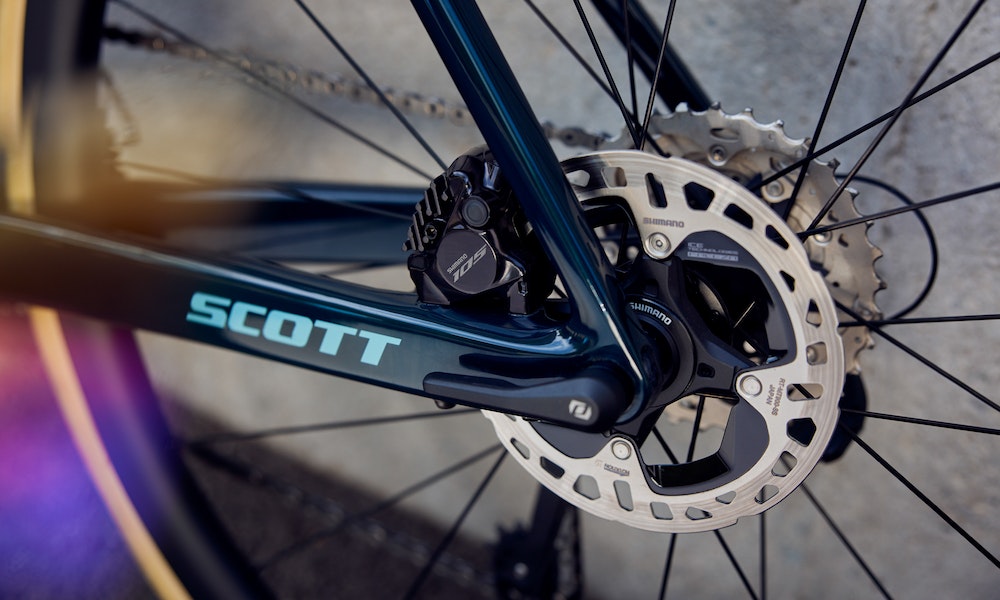 Shimano has long been applauded for its braking performance on the mountain bike and gravel side of the fence. With the latest 105, Shimano has again borrowed SERVOWAVE tech from its mountain bike groupsets, bringing the pads in contact with the rotor quicker, allowing for more power, control and braking modulation. Other improvements include increased pad-to-rotor clearance to minimise brake rub and an additional bleed port at the calliper for easier maintenance.

The elephant in the room for many glossing over the latest release will be the lack of mention of either a mechanical or rim brake counterpart of the latest 105 groupset. The silver lining here is that much like the outgoing 11-speed Ultegra and Dura-Ace offerings, the R7000 105 group will be supported for spares and consumables for the time being; however, with no mention in the press materials, one can only assume the future of Shimano’s road-going offerings, at least from the enthusiast-level and up, is all-electric. 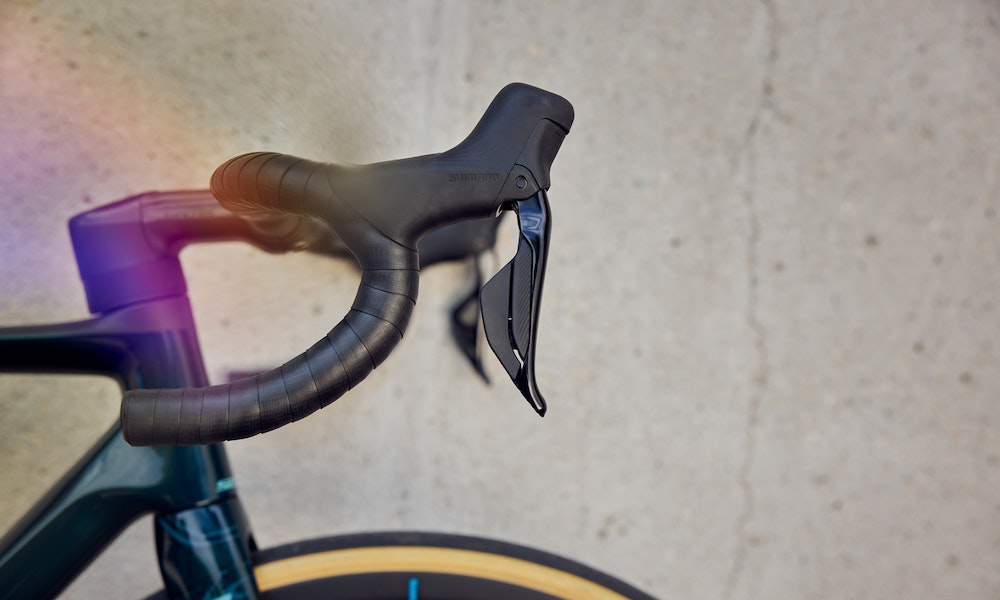 Another area of the group to benefit from pro-rider feedback is the dual control levers. The latest shifters feature a raised hood peak, and a new lever shape which is said to enhance comfort and control regardless of whether you’re riding in the drops or on the hoods. The braking action is said to be lighter and smoother, thanks to the advancements in braking technology mentioned above. Finally, the levers also retain an adjustable reach, making them suitable for those with both big and small hands. 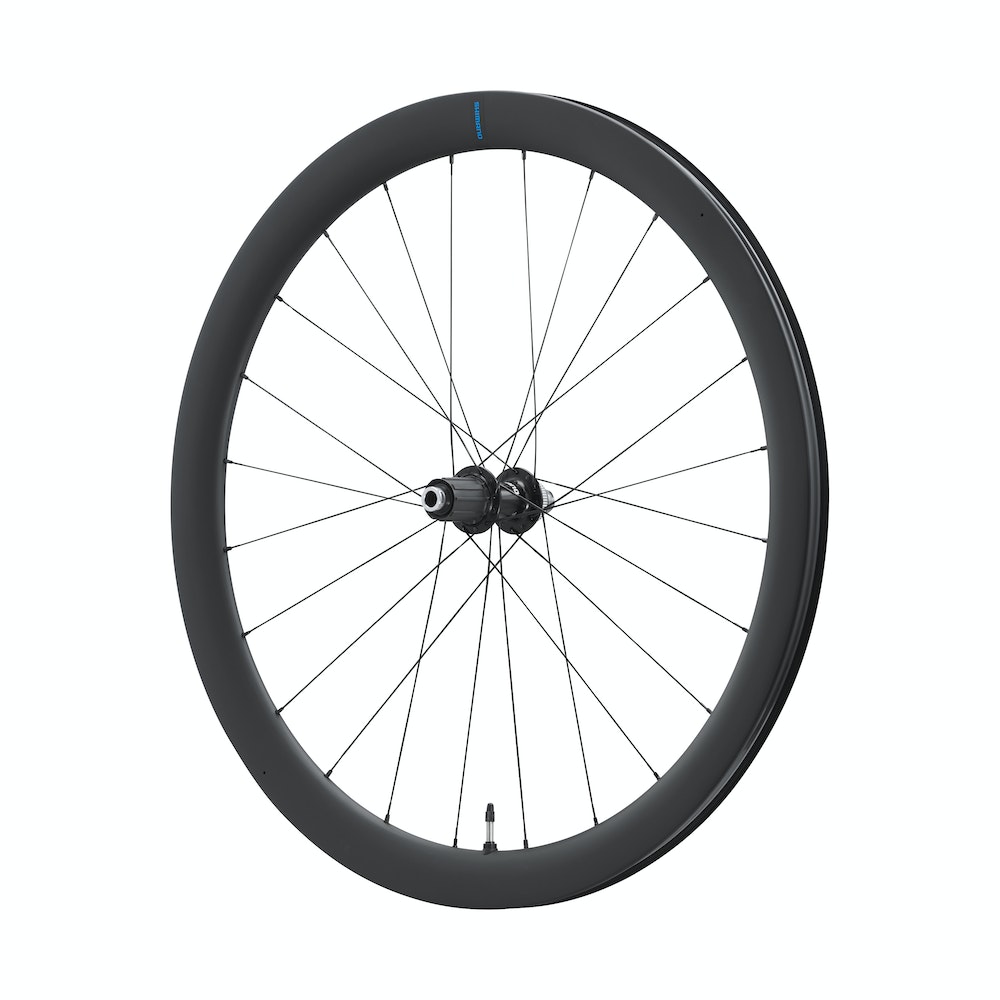 Also announced alongside the Di2 groupset are two new tubeless-ready carbon wheelsets, the climbing focussed C32 and the goldilocks C46. Both wheels feature proven cup-and-cone bearing tech, 24-spokes front and rear with 12mm thru-axle compatibility. The rim shapes themselves are carried over from its Dura-Ace and Ultegra counterparts, with the main differences coming in overall weight.

Per its name, the C32 features a 32mm rim depth, while widths are pegged at 21mm internal and 28mm external. The C46 features the same internal and external rim widths, albeit with a total depth of 46mm, which looks to be versatile in most conditions riders are likely to encounter. Shimano claims the C32 tips the scales at a commendable 1502g while the C46 is a little heftier at 1610g. While local pricing is yet to be announced, sitting at US$1049.99 abroad, we should expect the hoops to land locally at the $1500-$2000 price bracket. 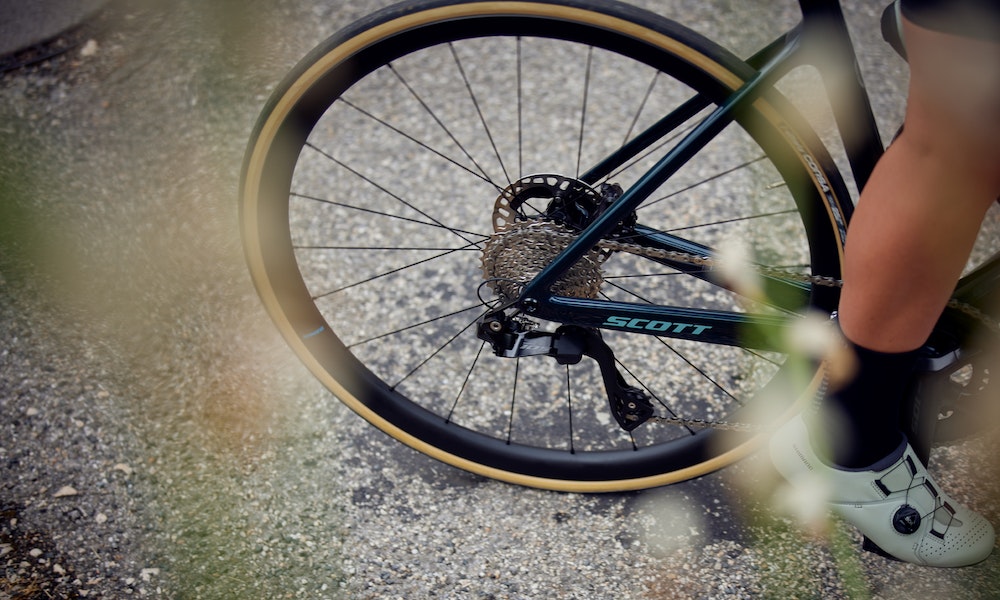 Alongside the migration to Di2, a key upgrade to the groupset over its predecessor is the move to 12-speed shifting. With its latest offering, two cassette options will (eventually) be offered alongside two cranksets. Cassette options include an 11-34T option, with an 11-36T option expected to arrive in the coming months. This is the same story on the crankset front, with a 50-34T option available at launch and a 52-36T option to be offered in the coming months.

Carrying much of the same shifting performance as its upmarket stable mates, aside from price and materials used, the main difference between Shimano’s three Di2 groupsets is weight. The table below tells most of the story, but expect a 105 group to tip the scales at 3067g, some 377g heavier than Ultegra and 630g heftier than Dura-Ace. Most of this weight gain is experienced at crankset, cassette, shifters and rotors. A direct result of more substantial but arguably more durable aluminium and stainless steel materials utilised in their construction. 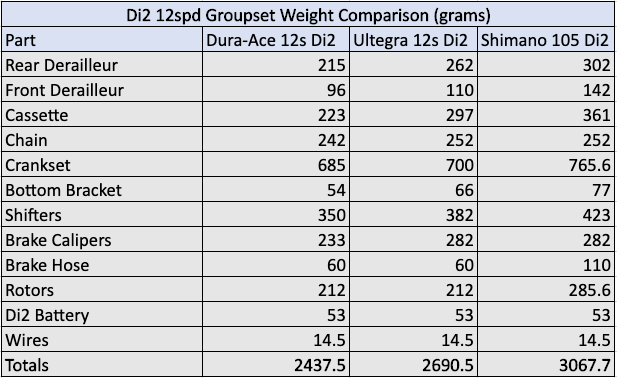 With its latest release, Shimano has truly bought its third-tier groupset for the road in line with its stablemates and, crucially, its main competition over at SRAM. The improvements and refinements have come at a cost, though, with the groupset set to retail for AU$2553.95, not including the M7100 chain and RT70 rotors intended for the group. All told, buyers should expect to part with AU$2650~ for a complete groupset.

At the time of publishing, Shimano Australia expects the latest 105 Di2 groupsets to be available locally from August 2022. In terms of OEM availability, a handful of manufacturers, including Ridley and Merida, have confirmed the latest groups will be offered on their 2023 product line-ups; we expect more to be announced towards the end of the calendar year. 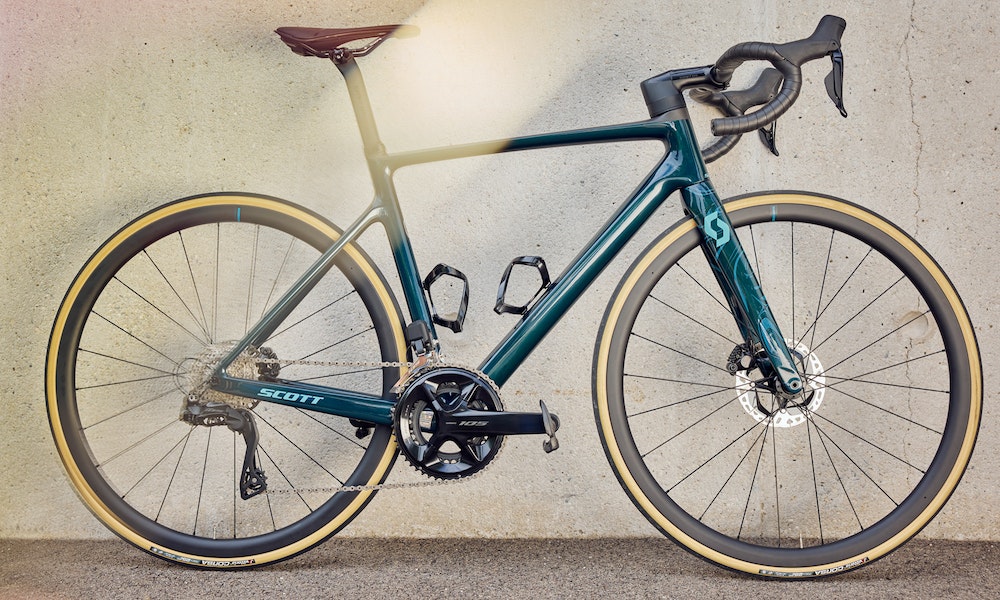 In the market for a new ride with the latest tech? Browse our huge range of Road, Mountain, Gravel, and E-Bikes